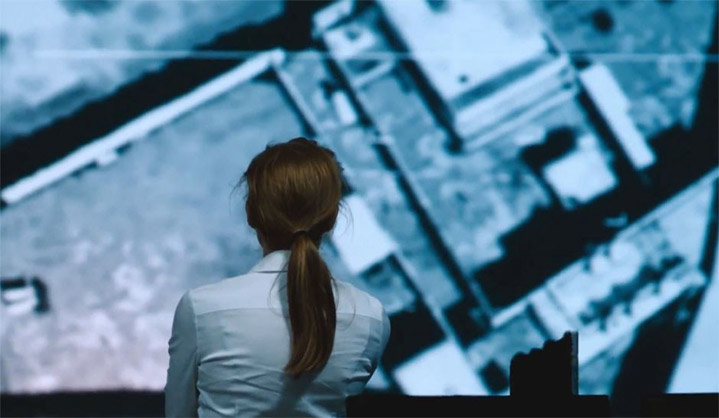 The protagonists of Zero Dark Thirty debate logic and theory. They are less spies and more espionage critics; they take copious notes, trade interrogation DVDs, and analyze their targets’ actions in terms of intention and authorship. Everything is founded on some kind of theoretical framework. Everything can be intellectualized.  “We don’t deal in certainty,” one CIA operative says, “we deal in probability.”

What emerges is a portrait of modern warfare as an elaborate technocracy. Torture, surveillance, and enemy action are all treated as data, which is then used to calculate probabilities. These probabilities form the bases for future actions, which yield more data. The cycle goes on and on and on.﻿

Kathryn Bigelow's new movie has a lot in common with another ambitious film released this year by a major American filmmaker—﻿Paul Thomas Anderson's The Master. Both films deal with systems—﻿﻿the War on Terror in Zero Dark Thirty, the Cause in The Master—which purport to overcome past traumas (9/11, bad memories) by transforming lived experience into abstract objects (military intelligence data, the Cause's performance-based therapy) and which become ends in and of themselves. Pointedly, both systems are predicated on defamiliarization, dehumanization, and repetition.

Both films are populated with characters who are fictionalized version of real-world figures (it doesn't take a lot of digging to figure out that Zero Dark Thirty's "Jessica" is Jennifer Lynne Matthews﻿, that "Joseph Bradley" is Jonathan Banks, and so on and so forth). Both also end on ambiguous notes and deliberately deny their viewers any sense of dramatic catharsis.

But though The Master is easily the more ambitious and accomplished movie in terms of filmmaking, Zero Dark Thirty is more accomplished in terms of drama; while its images are never as potent as The Master's, it uses them more purposefully.

"You don't want to be the last one holding a dog collar when the oversight committee comes."

Scripted by Mark Boal (who also wrote Bigelow's The Hurt Locker), Zero Dark Thirty is plotty, episodic, and heavy on title cards, which announce everything from date and location to theme ("Human Error," reads one). It opens with the 9/11 attacks—﻿﻿effectively represented by a black screen, a title card, and a handful of emergency call recordings—﻿﻿﻿before moving  forward two years to the torture of suspected al-Qaeda﻿ associate Ammar (Reda Kateb﻿) at the hands of CIA interrogator Dan (played by Jason Clarke as a terrifying, overgrown frat boy who treats his charge like a new pledge undergoing hazing).

The relationship created by this bit of montage—﻿﻿﻿from 9/11 straight into "enhanced interrogation"—﻿﻿﻿is significant to the film; with a single cut, Zero Dark Thirty posits the War on Terror as an outgrowth of national trauma. By extension, the viewer—﻿﻿﻿﻿﻿or at least an American viewer—﻿﻿﻿is made ﻿﻿complicit.

The torture scenes—﻿﻿﻿﻿which take up a good chunk of the movie's first 45 minutes—﻿﻿﻿﻿are brutal and difficult to stomach. Ammar is forced to wear a dog collar, deprived of sleep and food, stuffed into a box, waterboarded. The torture yields no useful information—﻿﻿﻿﻿﻿nor is it intended to. It serves only to instill Ammar with a fear of Dan and an understanding of the absolute power the interrogator has over him.

The "data-gathering" needs of the War on Terror enable and intellectualize Dan's sadism. It's a harsh view of the U.S. military intelligence process—﻿﻿﻿﻿﻿﻿especially because, rather than being aberrant, Dan is presented as typical. Once torture falls out of favor later in the film, he effortlessly slips into a new role as a Blackberry-carrying D.C. analyst.

Despite presenting the actions of CIA interrogators during War on Terror in a negative light, Zero Dark Thirty has, in recent weeks, been accused of glorifying torture. The most vocal proponent of this idea, Glenn Greenwald, has written two columns on the subject for the Guardian—﻿﻿﻿﻿﻿﻿the first written before he had even seen the film, the second afterward.

As laid out by Greenwald, the case against Zero Dark Thirty rests not in its depictions of torture, but in the importance torture plays in its narrative. Greenwald's second column—﻿﻿﻿﻿﻿﻿which describes the film as "CIA propaganda"—accuses the film of presenting torture "uncritically" and of suggesting that it was torture that allowed the United States to eventually find Osama bin Laden.

Greenwald's piece has a lot wrong with it: a lengthy, bizarre ﻿﻿﻿﻿﻿﻿﻿﻿sub-section that consists mostly of a diatribe against the Hollywood studios and their big-budget blockbusters (like The Hurt Locker, Zero Dark Thirty was produced independently); an apparent inability to distinguish a work of fiction from journalism; a total ignorance of form; a tendency to take as fact the opinions of people who haven't seen the film.

Still, Greenwald's columns have gained a fair amount of traction, as have similar pieces written by Jane Mayer for The New Yorker and Peter Maass﻿ for The Atlantic. And though their main argument is easy to dismiss—﻿the "enhanced interrogations" are useless within the context of the film's central investigation—their interpretation of the film should still be addressed.

"I want targets. Do your fucking job. Bring me people to kill."

Osama bin Laden's face is never shown in Zero Dark Thirty. George W. Bush and Dick Cheney are never mentioned. The lead-up to the invasion of Iraq is discussed—as an example of faulty logic—but not the invasion itself. Afghanistan appears only as an occupied territory. Barack Obama's election is never mentioned either; he appears only as a political candidate, briefly glimpsed on a TV.

Stripped of the extra-textual baggage so central to the Greenwald / Mayer / Maass interpretation, what does Zero Dark Thirty amount to? A film about a system which is created to avenge an attack but whose primary purpose becomes self-justification and then self-perpetuation.

For a thriller, Zero Dark Thirty is conspicuously short on on-screen villains. The main target of the film’s manhunt isn’t actually bin Laden, but his courier, Abu Ahmed—another non-character who appears chiefly in photos and tracking devices, and is glimpsed on camera only as a figure driving a car and as a corpse (in these brief appearances, he is actually played by the production’s IT administrator). The detainees, on the other hand, are sympathetic characters—traumatized by abuse, doomed to spend the rest of their lives in secret prisons.

Zero Dark Thirty never acknowledges any beneficial real-world results of either the War on Terror or the death of bin Laden; one is therefore led to assume that there haven’t been any. The film’s final scene, which takes place a few hours before bin Laden's death is officially announced, depicts central character Maya (Jessica Chastain) boarding a troop transport plane; she is told by a crew member that they have orders to fly her anywhere she wants, but as the closing close-up lingers on her face, what registers is a profound purposelessness—an unspoken "What now?"

Maya begins the film as a ghostly figure lingering in the back of Dan's interrogation shed. Recruited into the CIA straight out of school, she has no real friends and no inner life. Her obsession with finding Abu Ahmed speaks less to dedication or professionalism (the film establishes several times that she’s disliked by many of her colleagues) than to a need for purpose. Like Sgt. James, the protagonist of The Hurt Locker, she uses war to fill an emotional void; without the manhunt, she has nothing.

She is, in other words, a perfect agent for the War on Terror—or, more specifically, the film’s version of the War on Terror. There’s no discussion in Zero Dark Thirty about the efficacy of torture—but also no talk about victory, jurisdiction, or justice. No one in the film ever suggests capturing and trying bin Laden.

What the characters do talk about is process, probability, and the relative value of information. Warfare becomes data, and then data becomes the object of warfare, supplanting its original goals. When Osama bin Laden is killed in Zero Dark Thirty, his death is abrupt and anti-climactic. No burden is lifted. The Navy SEALs quickly load him into a body bag. He's just another corpse. They're more interested in his computer hard drives—the data that will allow the War on Terror to continue.﻿

"There's no shame if you want to watch from the monitor."

A fiction founded on fact is still fiction. Questioning the historical accuracy of Zero Dark Thirty's images—﻿﻿﻿﻿﻿which is what Mayer and Maass have founded their arguments on—﻿﻿﻿﻿﻿misses what those images actually portray (Greenwald's argument is founded largely on assertions about the film that range from specious to completely fabricated).

Zero Dark Thirty's tone is the opposite of a jingoistic rah-rah-rah.﻿ It's a grim movie which foregrounds the casual cruelty of its characters; it's not for nothing that it establishes the brutality of torture before establishing its function within the War on Terror, or that it details how the Navy SEALs who storm bin Laden's compound nonchalantly execute wounded combatants.

The film's main characters never do anything that could be interpreted as heroic; instead, what is always identified is how they—﻿﻿﻿﻿﻿﻿single-minded Maya, sadistic Dan, careerist Joseph Bradley (Kyle Chandler), over-confident Jessica (Jennifer Ehle)—﻿﻿﻿﻿﻿﻿﻿function as agents of a vast, impersonal system. Also present is a very large supporting cast (the film features over a hundred speaking roles) playing characters who are almost never identified by name; what identifies them instead is their place in the network—﻿﻿﻿﻿﻿﻿﻿﻿as informants, translators, lookouts, guards, analysts, surveillance specialists, decision-makers. The section of the film that deals with the Navy SEALs who eventually carry out the raid on bin Laden's compound begins with a title card that reads "Canaries."

Within Zero Dark Thirty's mise en scène﻿, monitors and live video feeds become interchangeable with their real-world subjects. People become tracking device blips, shapes glimpsed through the spy planes, photos pasted on dry erase boards. Late in the film, Maya stands in the CIA's Predator control center, gazing at a wall-sized screen; in front of her is the ultimate expression of technocratic warfare—﻿﻿﻿﻿﻿live video of a drone strike.

Zero Dark Thirty is the first of Bigelow's films to have been shot digitally, and, like a number of films released this year—﻿﻿﻿﻿﻿most notably Holy Motors, Leos Carax's first digitally-shot feature—﻿﻿﻿﻿﻿﻿it expresses an ambivalent attitude toward digitization.

Carax's film ends by declaring that "the era of visible machines is over." Bigelow's, less mournful, implicitly declares the end of the era of visible warfare. Bin Laden—﻿﻿﻿﻿﻿﻿﻿never directly shown in the film, and referred to in the dialogue largely by the CIA initialism "UBL"—﻿﻿﻿﻿﻿﻿﻿﻿is the last real-world foe, and he is defeated by being turned into abstracted data; his location is not discovered, but deduced.﻿ When the CIA finally decides to strike against him, it's not out of moral imperative, but out of calculated probability.