“All composed things are like a dream
A phantom, a drop of dew, or a flash of lightning…”

All composed things are a dream, even those composed to mimic the real, to give the impression of nullified artifice, with contents concealed behind handle-less cabinets, smoothed-over cuts, and vanished work. And if all composed things are but an illusion, then what brings certain composed films to gravely insist, through arguments of form, upon their veracity ? This is the unreal real, a form inspired from amateurishness, from the documentary, from the nouvelle vague, a dogma with its muted colors, shaky camerawork, and pretense of observational neutrality which clamors like a commandment, “I am the real, thy Lord, Thou shalt have no other reals before Me.”

This unreal real originated from a cinematic form of revolt against the polished professional artifices of industrial giants, but its rebellious forms have been assimilated and dissolved, as in so many films in this year’s Berlinale. The unreal real is the adornment of skin with the pretense of nudity. It coquettishly feigns a modesty of form yet is accompanied by a mania for explanation, insisting upon the linear and logical chain of events. Its pretense is that of otherness; its condition is that of sameness. The unreal real is a form that posits an understanding of the world through cinema, a sacerdotal approbation to the verity of the events displayed. It demands a faith in moral acquisition through the act of film watching, in progress, and uses the illusion of formalistic freedom to announce its dominion. 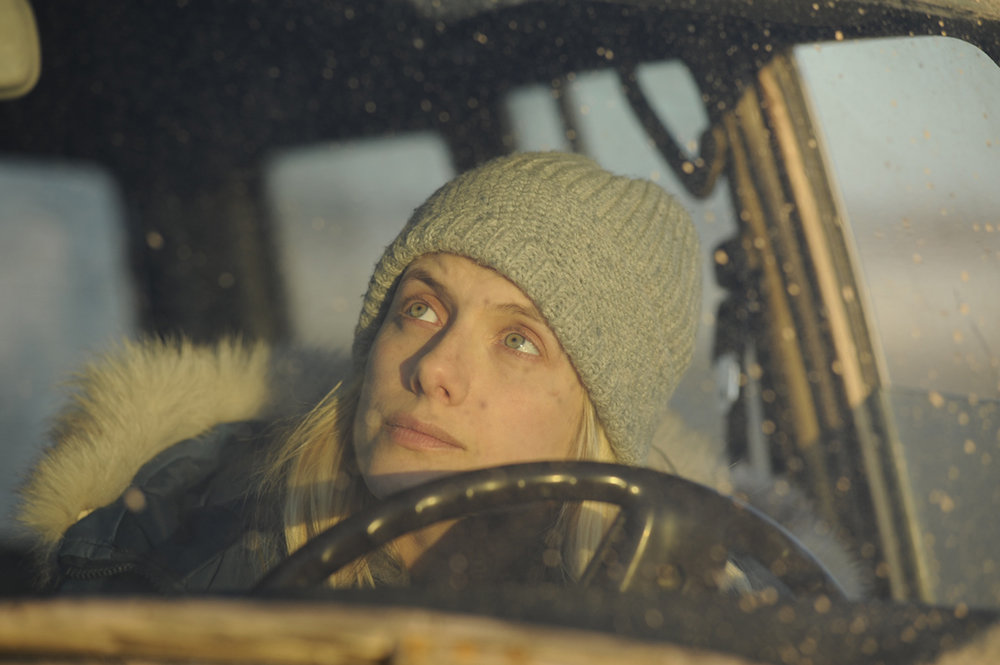 But rather than freedom, the imprisonment of the unreal is a form of the real which fails at its own game, like is does in Claudia Llosa’s Aloft. In that film, the falcon-trainer Ivan (Cillian Murphy) goes on a road-trip with sexy French journalist Jannia (Mélanie Laurent), ostensibly to see for the first time his mother who abandoned him decades before to embrace her destiny as a new-age nature healer. As Ivan departs on his voyage, his young wife ignores the actual blonde beauty of the Mélanie Laurent who plays Jannia, and has to pretend, for the scene to be swallowed, that the gorgeous French actress is just a regular-looking woman. This real that is unreal is one that fails its own exigencies of logic; its form is dishonest, if not simply clumsy. As in Jack, an adventureless tale of two young boys abandoned by their well-meaning but party-hard teen mom, who wander the streets of Berlin in search of her. A film which can only make its moral by a gauche manipulation of the moral logic it proposes. We are asked to believe in the total abandonment of the children to the realities of the streets, yet the film sees fit to bless the lost babes with unconditionally blustery days, making a display of if not the film's own falsity, than its inability to remain within its dictates. A film in which, all while asserting the real of its logic, two young lads are implausibly left in the street by their mother’s kind and caring friend, who incredibly agrees not to take them into the police station in front of which he stands, or bring them home, leaving them to simply wander the streets at night. We have a ‘real’ mother and a ‘real’ friend, yet both exhibit a completely fantastical social and moral being, utterly undermining the film’s proposition of a real.

The unreal real is a form of the real which lacks the stamina to follow its own mot d’ordre, a calcification of Godard’s home cinema, of Lars von Trier’s liberated camera, of neo-realism’s urban shoots, which confuses the form of the real and its politics. The ‘real’ for Godard, for von Trier, is a method of opposition, a negatory stance towards a systematized professionalism of the image, and a source of inspiration which allows each to undo binds, breaks rules, renew forms. Their real generates an artistic and often political force only because it never makes the error of presenting the façade of a ‘real real,’ being instead but the reutilization of a form, stolen, transformed, synthesized to allow an aesthetic liberation.

Yet the real as shot in films such as Aloft, Jack, Macondo, Praia do Futuro (all in competition at the Berlinale) are just automated simulations of this form of the real which result in a frameless filming of screenplays which could be summarized as “shooting stuff that happens,” the painterly equivalent of arbitrarily mixing all the colors on the palette without either care or attention, resulting in artworks entirely composed in a dull, swampy brown. These are works whose utilization of the frame is limited to attempts at ‘making pretty,’ and which exhibit a lack of understanding present in all great cinematic works: the proposition of world that emerges with the frame’s definition. Yet with these works exhibited at the Berlinale, their frameless approach, their arbitrarily shaky handheld cameras do not define the world through selection, but content themselves with observing. Entirely unaware of its own power, the unreal real relinquishes not only its potential frame, but also its potential idea, potential art. 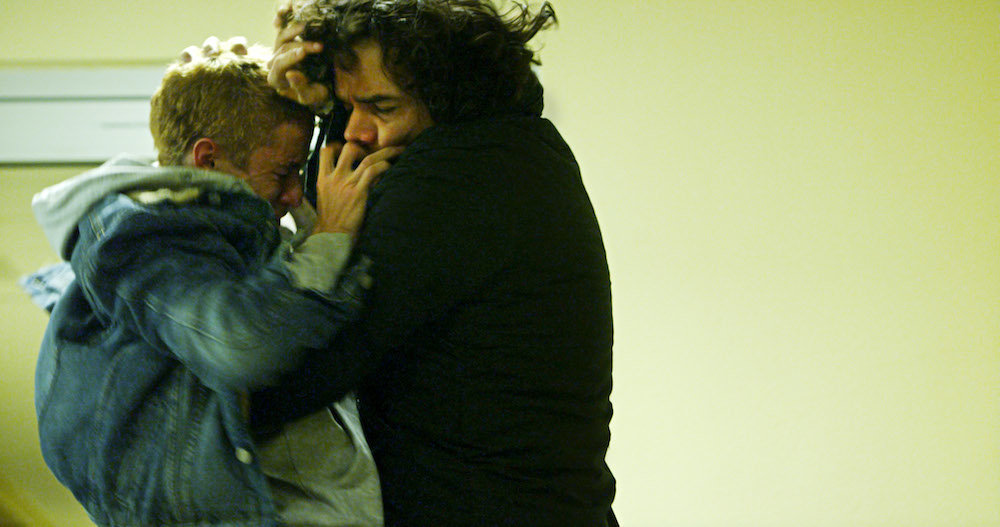 Above: Praia do Futuro

In the unreal real the dramaturgy, like the camerawork, is reduced to a common-sense logic which leads to an image that is stale when not superfluous, loose when not empty, inefficient when not pointless. Like in Praia do Futuro, whose real (the loss of a lover) peters out to nothingness (aimless meanderings through Berlin) because it has nothing to say and not even the very basic obligation to entertain. If the films of the unreal real get stuck slogging through greyish unmemorable images, it is because they exhibit that the the that film is but a vehicle for which story is the real content, that it is only the event which matters.

The unreal real often believes itself to be revolutionary, unable, like every reactionary, to recognize its fundamentally conservative characteristics. It demands that cinema’s potential be abrogated and its field of action reduced to that of passive observation. The unreal real occurs, like all reality, only in the present; a present which either cannot or will not assume its own history. And so in Macondo, the story of a young boy struggling to find his place in an immigrant Chechen community in Austria, director Sudabeh Mortezai pretends to be able address Austrian xenophobia without fulfilling her obligation to pass through Austrian history (a mistake never made by a Haneke or a Seidl). At fault may be the director’s lack of artistry, but may also be a certain approach, an all-too comprehensible plea for the unreal real.

Godard’s and Lars von Trier’s films might use forms of the ‘real’ but never its content. Ulrich Seidl’s entire aesthetic arises from his active recycling of the real, which through its obviously composed form (the static dead-pan planar shots) disallows any possible faith in the real that he uses. Godard, von Trier, Seidl, Haneke all understand that every filmic gesture is also a political one, and they never make the error of a dogmatic sustention of the real they themselves create. Rather, they use the real for its artistic potential in relation not between the film and the world, but between art and world.

And how real in fact is the most real of images? How real can a monocular two-dimensional rectangular cut of the world recorded at a particular focal length, a specific aspect ration, and a precise pixel count be? Is the academy ratio more or less real than widescreen? Does HD look more or less real than 35mm? Do we see the world in a fixed 45-degree vision and does a zoom approximate our psychological intent? And do any of these ever signify the actual world? And should they ever even try? 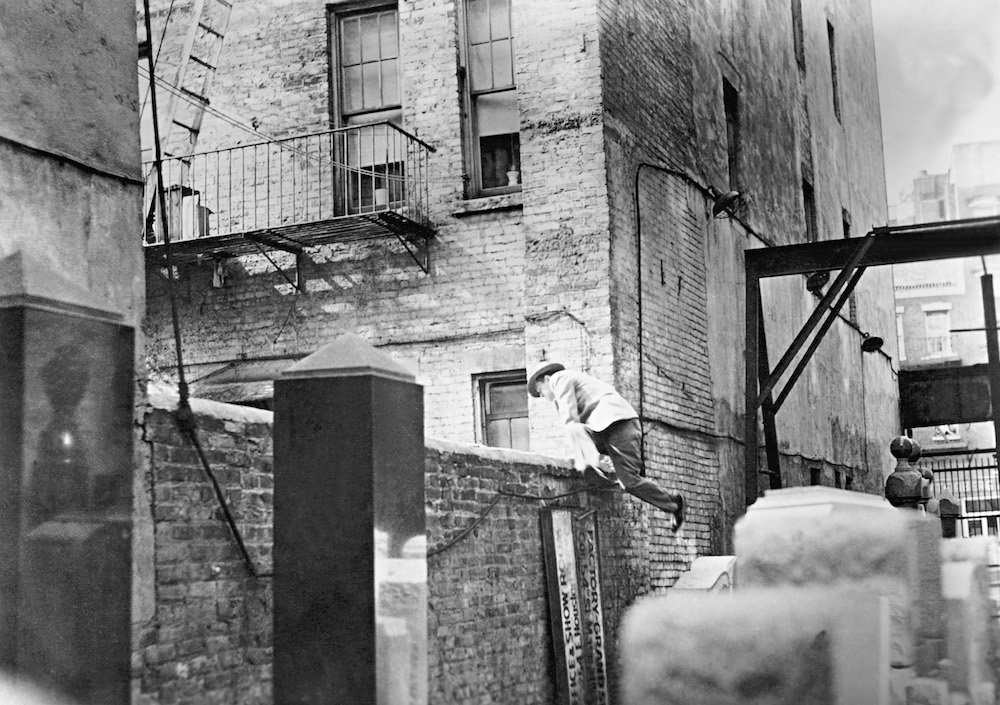 Above: The Naked City

For the real is just one form amongst a multitude of possible forms, never one posited as a dogma, but one from which film can enrich itself, as it does playfully in Jules Dassin’s The Naked City shown in this year’s retrospective “Aesthetics of shadow: Lighting styles 1915–1950”. The Naked City uses the real as a pretense of rupture from a studio style to convince the viewer, tongue-in-cheek, for the duration of this adventure, of the film’s veracity, creating thus its rough, crude, joyous portrait of New York City and its inhabitants. The camera and characters pass fluidly through real and unreal so as to nullify any potential difference between them, to reach not a realer real, but a composed creation, an image of a specific ambience of a specific city at a specific time—a New York unseen in other movies of the epoch, gritty, mean, fast and exuberant like in a Weegee photo, an invention of a city, surely no more or less illusory than any other New York. 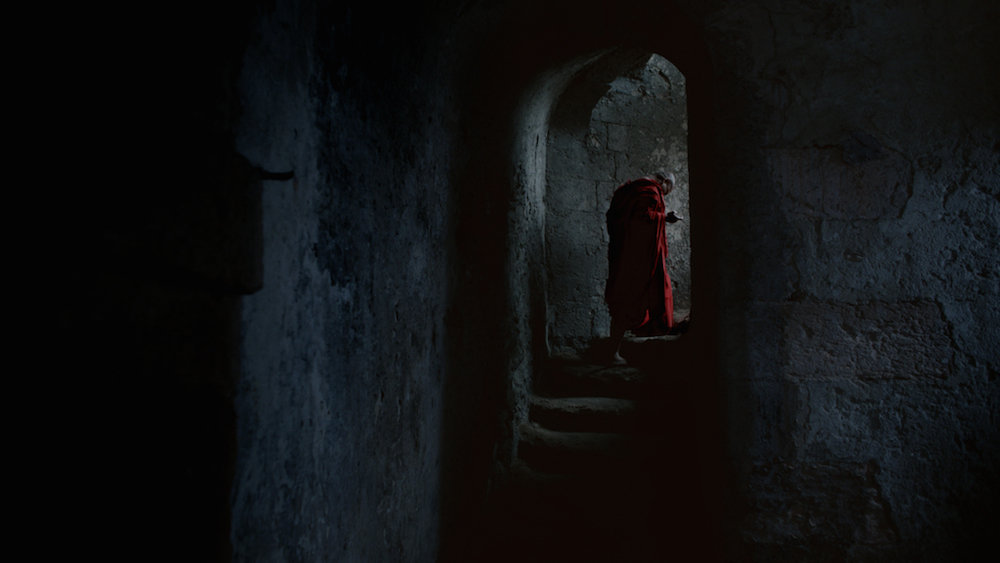 Above: Journey to the West

If the unreal real is the pretense of real that fails its own task, then the real unreal might be a method to renovate the real through the fantastical. And this is exactly what Tsai Ming-liang does in his Journey to the West. A Buddhist monk in orange kasaya voyages to the West—a cinematic West defined by the contours of Denis Lavant’s visage—step by step, slowly monotonously, a single step taking half a minute in his voyage across the framed Marseilles spaces. This monk (Lee Kang-sheng) is placed in reality, or in the appearance of a reality (the documentary image), and his meditative act of walking defines this reality giving it significance not only for him but for the viewer too. Once the bonze’s meditative act enters the frame it grants significance to all else that occurs, to those who watch him, like those who ignore him. When his orange robes are absent, we seek them, become active, observant, sharp. And following this ritualized walk, this meditation, we too enter a meditative state whose fundament is a rejection of the falseness of outer appearance, of the superficies of reality.

What makes this cinematic action a meditative one is the monk’s action, exhibiting a faith in the Other World as that of man’s origin and end. It is this that makes him a pilgrim to the West, a stranger in a strange land sensitized to the significance of its artistic forms.

As Journey to the West draws to a close we realize in its final image that what we had believed to be real was is fact little more than literally a reflection. The frame that we thought presented a sliver of real is in fact the object of contemplation, the flame upon which one focuses in order to access a deeper truth, that of the world’s composition, and not its being.