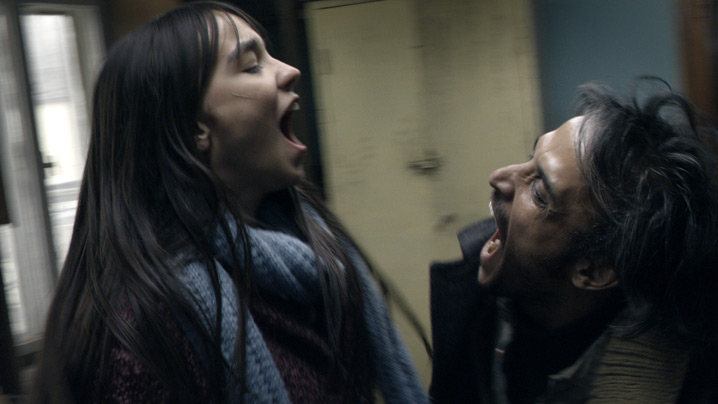 Little did the Ferroni Brigade anticipate the earth-shattering importance of the date, as it happily embarked towards the Sala Volpi (also affectionately known as "the basement boiler room") on that warm evening of the opening of the Venice film festival 2004. Not that we—that is, the soon-to-be founding members and Other First Secretaries of the  Central Committee of the Ferroni Brigade, Olaf Möller and Christoph Huber—weren't in a good mood: After all, we (almost) always rush to the cinema in hopes of being delighted and educated. And certainly the screening in the retrospective dedicated to the "Secret History of Italian Cinema" looked a lot more pleasurable than suffering again through Steven Spielberg's interminable The Terminal, which unspooled in the nearby Sala Grande, while we walked past our favorite festival usher (the "Centurio"), entered the shabby, but charming small screening room at the far side of the palace and snuggled into the cozy Volpi chairs (front row, center, of course) to take in the peplum La guerra di Troia (The Trojan War, 1961) by Giorgio Ferroni, a relatively little-known filmmaker, who—as the catalogue had pointed out, surely sparking our interest—was "one of the very few directors to work for the fascist Salò regime." 105 minutes later on that lovely September 1st we staggered out in ecstasy: Had we just seen a classical parable about the ravages and necessities of war? An apology for Santo Giorgio's Salò years? A stunningly mounted genre gem in startling Technicolor and with even more startling Techniscope compsitions? All that (at least), but one thing was even more certain: This was a monumental work of what might be most aptly described as fascist humanism.

Fascist humanism? Is such a thing even possible?, you may be tempted to ask. Be assured: yes, it is (just trust a bunch of left-wingers whose politcial ideas, middled, could best be described as pranksterish anarcho-syndicalists). Now consider the complexities, and then you get a glimpse not only of the particular, versatile genius of Giorgio Ferroni:  fascist maverick turned house auteur of the Democrazia Cristiana“, master of documentary spectacles (cf. Vertigine biancha, 1956) and genre specialist equally apt at creating a bewitching horror classic like Il mulino delle donne di pietra (Mill of the Stone Women, 1960), an autumnal Spaghetti Western like Un dollaro bucato (Blood For a Silver Dollar, 1965), spy thrillers like New York chiama Superdrago (New York Calling Superdragon, 1966) or war efforts like La battaglia di El Alamein (The Battle of El Alamein, 1969). More importantly, you can sense the kind of rich, often contradictory cinema that all too often gets lost in the shuffles of easy categorization or adherence to outdated canonizations that are, for the most part, never questioned. In short: the kind of cinema, whose dynamic understanding and reevaluation the Ferroni Brigade was founded to promote—personal, politically relevant and popular in the sense that it is not some estranged formalism, as, alas, is so often the case in the arthouse circuit (and not only there, although admittedly in a less formalist manner).

Ever since that September 1st (and actually, also before, we just didn't have a banner then) the Ferroni Brigade has championed the cause, undismayed by dubious festival selections, and occasionally exhilarated by inspired choices. Still, after five years of witnessing mostly distressing winners at the world's major competitions (often accompanied by an even more distressing critical consensus), we have decided that we will not take it anymore! Thus, starting retroactively with the reliably depressing 2010 Berlinale edition, the Ferroni Brigade will offer an alternative perspective: Henceforth, we will award The Golden Donkey for the Most Ferronian film, as decided by the present Brigade members (also including the Other First Secretary of the Central Committee of the Ferroni Brigade, Barbara Wurm. Unfortunately our fourth, The Hidden Member, never leaves Vienna). The winner can come from any festival section, including market screenings. The selection of the candidates will have to be made idiosyncratically by necessity—why waste time in possible competition entries, by, say, Pupi Avati, François Ozon or Oskar Röhler, when there might be a parallel offer? (Actually, even when there might be none, it would be the sensible thing to do. After all, we support a positive, enriching relationship between cinema and life.) Depending on the available choices, the Ferroni Brigade may also choose to hand out various little Silver Donkeys for special achievements.

And why the donkey, you may inquire? Well, amongst the axiomatic insights the Ferroni Brigade members (all donkey godfathers, not kidding) have gained over the years, one stands out: That the presence of a donkey makes any film better. We could also mention how, when we returned to Venice next year, we found a book on Italian cinema with a picture of Giorgio Ferroni and a donkey. But really, that just seemed inevitable.

And the Golden Donkey for the Most Ferronian Film at the Berlinale 2010 goes to: Kosmos (2009) by Reha Erdem.

Quite a surprise, right? Guess you all thought we’d go for Caterpillar by Wakamatsu Kōji, correct? Truth be told: We did indeed think about Caterpillar as it certainly is a work of uncommon Ferronian poetry and power, plus politically more than timely. But, let's face it: It’s not as if Caterpillar had gone unrecognised—it even got an award (Best Actress Silver Bear for Vibrator-Goddess Terajima Shinobu) and found quite a few vociferous supporters. The Golden Donkey, however, should always go to a film that didn’t get the attention it deserved. Okay, Caterpillar did not get the attention it deserved—which would have meant all awards plus the top spot of each and every one of those *- to *****-essais in experimental demographics, but at least it got some attention. Kosmos did not.

Of course, Kosmos was wasted on the Panorama Special-section, the probably dumbest of all main side bars (yes, it has come that far: there are main side bars and side side bars...). For competition, dem geniuses responsible for the annual mess of mediocrities chose Bal (2009) by Semih Kaplanoğlu, the lower-middle-brow version of higher-middle-brow-darling Nuri Bilge Ceylan (who got his first shot at A-competition-laurels in Berlin...), which, as everybody knows and by now probably has already forgotten again, went on to win the Golden Bear as another inoffensive exercise in mid-level okay-arthouse. Put simple: Bal is easy watching—Kosmos is not. Instead, Kosmos is everything cinema keyed at middle-brow mainstream respectability should not be these days: Muscular, tightly paced, anchored in a popular cinematic idiom, constructed like a metrically intricate prose poem set to a complex rhyme scheme, aggressive in its beauty, politically charged, and spiritual in a decidedly non-contemplative way. Reha Erdem: a 100% Ferronian auteur at the height of his art.

As the piss-poorness of the Berlinale doesn’t really permit handing out too many awards, we’ll leave it at two more:

A Silver Donkey for Matt Porterfield’s Putty Hill (2010), a mainly improvised, made-with-amateurs sketch of a proletarian US, its ways, sounds, cares and worries—the most tender work around: solidarity pure while never simple.