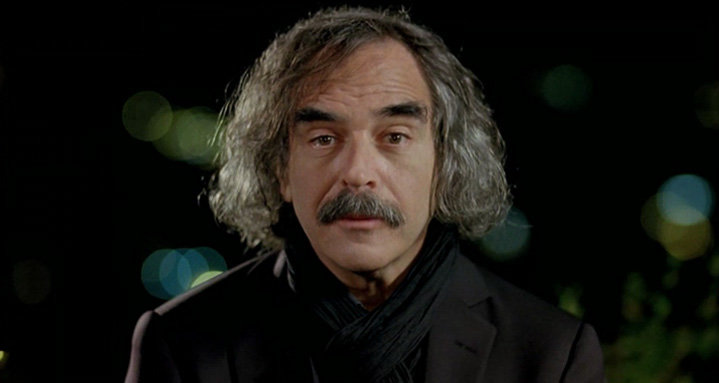 If there's any modern director who could be called an ascetic of the spoken word, it’s Eugène Green. It’s not that his films aren’t talky; in fact, the majority of the action occurs in and around the dialogue (or, as in the case of Le monde vivant, within and out of the dialogue). Green believes firmly enough in spoken language—and in the inseparability of language from the culture that produced it, and in turn in the inseparability of ideas from the language they were conceived in—to never use it carelessly (there are no throwaway lines in a Eugène Green film), which is why it’s unsurprising that he prefers e-mail interviews and prefers to answer questions in French, his adopted language (he was born without accent marks over his first name in New York City and emigrated to France as a young man) and the one in which he has worked since the 1970s as a theater director, essayist, novelist, poet, actor and filmmaker.

I've never gotten a handle on the "e-mail interview" format, so instead of trying to imitate a conversation, it was decided that I would put together a short questionnaire relating to his work and to his newest film, The Portuguese Nun, which follows a Franco-Portuguese actress (Leonor Baldaque) who becomes fascinated with a nun while shooting an adaptation of the 17th century epistolary novel Letters of a Portuguese Nun on location in Lisbon; Green himself plays the film-within-a-film's director, "Denis Verde" (pictured above). The film opens today at Anthology Film Archives in New York and is currently streamable here at MUBI.

NOTEBOOK: Your films are very focused on spoken language, and on what happens when a word is uttered. And, especially in The Portuguese Nun, there are many scenes of musical performance. In that sense I would say that your films are concerned with “the present moment.” But at the same time, they are often set “amidst” cultural heritages. In The Portuguese Nun, we are often reminded that the characters are moving through a very old city. The first shot, in fact, begins with very modern graffiti, and then the camera pans over to reveal an immaculate cathedral in the background. (1) How do you see the relationship between the past and the present, and do you believe cinema is especially suited for depicting this relationship?

EUGÈNE GREEN: I think that the only real time is the present, and that it contains everything that was and all that may be. All films occur in the present tense, because the film is shot and "sealed"—to use a term from Tarkovsky—and then becomes, at the moment of viewing, one with the spectator.

Today, people do not live like this: they do everything from a distance, with earphones in their ears, talking on their cellphone to someone who is absent, but at the same time they reject any notion of the transmission of civilization and history. For this reason, having no past and unable to live in the present, they have no future. A film—a real film—and I'm not talking about American movies [bougeants barbares]—forces people to live in the present, and therefore the past and the future. For this reason, yes, this artistic form is, in my opinion, the one most able to express the reality of time.

NOTEBOOK: (2) Do you think cinema constitutes a language of its own, or is it inseparable from spoken / written language?

GREEN: Obviously I think that cinema is a language of its own. The dialogue in my films is not, as in the theatre, an independent means of expression, but rather it is the inner energy that emerges from the person who utters it. However, as I explain in my essays on cinema, Présences and Poétique du cinématographe, I think, historically, the cinema was born in the late 19th century in an attempt to recover the old value of speech—that is to say, the ability to designate elements of the material world (le mot) like this so that the signs that identify them have their own identity and at the same time the unspeakable mystery of the thing designated (la parole), including its spiritual dimension (le verbe). This distinction is easier to explain in French than in other languages, where the same word—the word, das Wort, la parola, a palavra—would be used to translate the three different words I've used.

For this reason, I would define cinema as "the word made image," a definition which applies equally to sound and silent films.

GREEN: Obviously yes. I could not have made it anywhere but in Lisbon, and Portuguese culture, in its specifics (fado, the sense of time, the myth of O Encoberto—"he who is hidden"), is constantly present in the film. Furthermore, my approach towards the Portuguese language [in The Portuguese Nun] is the same as the approach towards the French language in my other films, and it plays an important role in its artistic alchemy.

NOTEBOOK: (4) Did you write the script in Lisbon?

GREEN: No, I wrote it in Paris, but Lisbon was still present, in an even stronger way, for, as in Baroque culture—and also in Portuguese culture—all spiritual reality appears more clearly through its absence.

NOTEBOOK: (5) There’s always an audible pause—and often a cut—between lines of dialogue in your films. Characters never interrupt each other, and dialogue never overlaps. You were active in theater for twenty years before you began directing films. Did you develop this technique while directing plays ?

GREEN: For me, there is no direct relationship between theatre and film. I don't try to represent banal reality in the dialogue of my films—if we see the same thing in a film as we do in the street, what's the point of watching a film?—but to reveal to the viewer the hidden part of reality that our current culture prevents, or even prohibits, him or her from seeing. A lot of work was put into the dialogue at the time of writing to achieve simplicity—which is very complicated—and to concentrate a maximum of energy in a minimum of words. What interests me is the inner energy that emerges through these sentences from the speaker, but also in those who hear them speak. This is the reason for the systematic shot/reverse-shots, and for the need to show the character before and after every sentence he or she says or hears.

NOTEBOOK: (6) Much of your work outside cinema has been concerned with staging the theater of the Baroque period, and you draw on the literature of that period for The Portuguese Nun. Would you say that the Baroque is modern?

GREEN: The Baroque period was a crisis of European civilization which was never resolved, so it speaks directly to our time. In what I call "the baroque oxymoron" (the concept is addressed at length in my essay, La parole baroque), the man of this period continued the construction of a rational model and mechanism for the universe which seemed to remove the need for the sacred, but at the same time continued to believe that a Supreme Truth was hidden in the visible universe—which in turn, paradoxically, was unreal. The denial of "scientific" truth and a belief in the possibility of several things seemingly contradictory at the same time, are, for me, necessities for the modern man.

NOTEBOOK: (7) A speculative question: did you originally set out to direct an adaptation of Letters of a Portuguese Nun, or was a film set around the production of an adaptation of the novel what you intended from the beginning?

GREEN: I never intended to adapt Letters of a Portuguese Nun. The core of the project came with the title in a flash—as all my films and novels do— and it was the idea of a French actress who comes to Lisbon to act in a film inspired by Letters of a Portuguese Nun, and is fascinated by a real nun who prays every night in a chapel. The city of Lisbon gave me the rest.

NOTEBOOK: You make use of a set of particular techniques for nearly all scenes in your films, and you've always used camera movement very sparingly, if at all. To return to a shot I mentioned in the first question, one technique that you use several times in The Portuguese Nun is a slow left-to-right pan. There's a very good, very funny shot in the film, for instance, where the camera starts on a dance floor; there are two women dancing, and neither one will dance with your character, Denis Verde, so you walk out of frame and the camera begins to slowly pan across the night club, finally arriving at the bar, where your character appears in the frame again and orders a drink. Was it a conscious decision to make use of more of these kinds of shots in this film? (8) Do you see yourself making more techniques "yours" in the future?

GREEN: For me, any technique must be used to express something. Most of what I want to express on the screen requires a fixed frame. But I've always used pans (both from right to left and vice versa) when I felt the need. In The Portuguese Nun there is a movement that I had never used before: a circular (or rather oval) pan around Julie [Leonor Baldaque] and Henrique [Diogo Dória] in a restaurant, since they are both people who don't know each other, and who, sitting on the circumference of a circle (the table) are trying to approach each other.

I hate the shoulder-braced camera, but I used it once in Toutes les nuits because I wanted to have a frontal view of Jules and Lucy while they were walking and talking, and in this case a dolly track would have become visible. It was an experience I will not repeat.