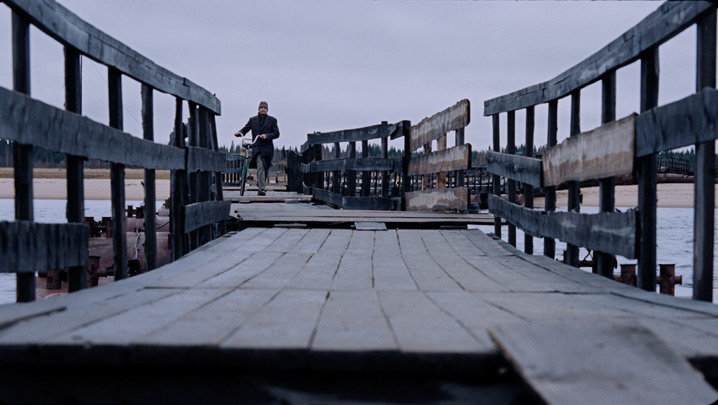 As I recall, there’s a great piece by Claude Chabrol (“the late,” can you believe it?) in Cahiers du cinema in praise of small subjects for films.  For the naturally portentous genre of art cinema, such subjects too often get blown out of proportion, senses of grandeur distorting.   This film is an adaptation of a story about a mill owner who takes an employee with him on a car ride around their locality in a ritual that ends with them immolating the corpse of the owner’s wife, scattering her ashes.  Fedorchenko has chosen his small subject and, despite working in a style many would think presumes high importance, keeps the sense of scale intact with a resolute solidity of the two men’s trip and a steadfast, wholly composed simplicity.  Compositions are in wide screen but it is always roads, rivers, doors and paths that extend down the center and into the distance; the weight of solemn grey fixed camera shots lifted to a tranquil, almost nostalgic tone by this continual hint at journey and death.  Indeed, nostalgia is a key aspect to the film, which has little dialog and is instead narrated by its almost silent protagonist, the companion to the boss, himself reflecting upon and mourning the lose of culture—words and rituals—of the local Meryan population.  His father was a poet of the Meryan, and the burning ritual with the dead woman’s body is part of an already half-forgotten rite, the man’s participation a kind of activist preservation, or perhaps a mourning of a mourning.  There is little else to the film except its minor-key tourism of the region, the actor’s disconnected voice removing us from the pathos of the-filmed and throwing the moving images into a realm of stoic—but modest—well-composed pastness.  The ending is perfect, a bit of chaos thrown into the gears of this placid memorial to remind us that perhaps one cannot reflect and live at the same time.

I have the feeling that if this movie was projected out of focus in either slow motion or sped up it would be a fantastic experience.  Emphasis on movement and color, the condensed, mirrored space of the gym swathed and blurred into a mass, the monotony of the film abstracted into jerkily dancing color and patchy fields of muscle.  Unfortunately this wouldn’t have been even accidentally possible at TIFF, since Boxing Gym was shown at an AMC multiplex theater, and since Wiseman’s movie was shot in 16mm in 1.33 ratio, which I assume the AMC chain is unequipped to project, it was shown digitally, the sides of the empty, wide theater screen left unmatted even with a curtain in the theater.  It brought home a point a programmer made to me earlier in the festival, that Kelly Reichardt’s decision to shoot her Meek’s Cutoff in the old square aspect ratio (and to frame it so that it could not be matted into a widescreen frame) might seriously hinder how extensively it could be theatrically released.  Unless it’s projected on video, I suppose.