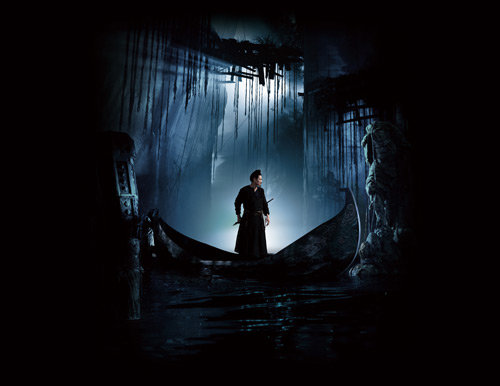 0845 Detective Dee and the Mystery of the Phantom Flame (Tsui Hark, China)

In marked contrast to Takashi Miike’s staunchly assignment-like, termite-filled genre epic 13 Assassins, Tsui Hark shows the other side of the coin, a once-maverick, now-regular filmmaker whose flourishes are as inspired as always but whose cinema profoundly misses the hunger, the perspicacity, the preciousness, the by-any-means-necessary sense of attack energy of his youth.  Fine.  Detective Dee runs on its genre engine well enough nevertheless—an imprisoned Andy Lau is taken out of jail by the soon to be the first female empress of China to solve, as the title so honestly puts forth, the mystery of people spontaneously, hideously, and in great computer generated cindery detail, bursting into flames and burning to death.  Tsui centers the beginning and the end on a mammoth Buddha skyscraper built in the Forbidden Palace’s backyard (circa 650 A.D.), which obtains a conceptual grandeur and abstract, plastic mass that helps cancel out ill-lit, under-textured computer effects.  The middle is then stuffed with the usual, and highly entertaining, hijinks while our-handsome-Lau teams up with an investigating eunuch and beautiful girl who may or may not be the Empress’ lover and may or may not also love Lau.  (One of the film’s best scenes is the prototypical let’s-flirt-by-fighting scene while Lau gets his prison beard shaved and fends off a riot of assassin’s arrows poring into the room.)  The fights are great, dank wooden logs heaved back and forth between underground assassins in the “spooky pandemonium” of the “phantom bazaar” (which looks like the wuxia version of the “Pirates of the Caribbean” ride), taving off killer magical antelope (that talk too!), puppeteered mechanical robots, talking antelope, and more.  Tsui reaches for no profundity and understandably finds none, but his images are clear, his action slick and clever, and everyone is just so damn affable, even the grouchy eunuch.  By the time we get a long shot of the statue slowly collapsing forward onto the Palace the film climaxes its slick, business-as-usual boldness, a far cry from the director’s 1980s’ ambush approach to filmmaking, but as professional, amusing and pleasingly as anything, constantly tinged by the sly, colorful flourish.

Breillat returns to the fairytale genre in her follow-up to Blue Beard with a far more unconstrained approach, opening a world, like Alain Resnais, between stories.  The young 6 year old girl Anastasia, cursed by a witch, is to sleep 100 years and wake up 16 years old, but instead of jumping in a flash to her waking, Breillat fills out her dreams between in a surprisingly sober and lucidly playful picaresque as the young girl travels through time and space to look for her love.  It starts out at the film’s best sequence, with the young princess being absorbed in a rural French family in the forest, where she falls for her older adopted brother.  When he is lured by the icy beauty of the mythical Frost Queen, Anastasia leaves the comfort of her home to search for him, a search that leads her to her awakening at 16 and the joy, confusion, and ultimately troubled result of trying to lay over her waking life the joys of her dreams.  It is quite a beautiful idea, to fill out a dream space and then to have that space inform real life to romantic, erotic, but also melancholic and dissatisfied effect.  With a light touch the film flies, Breillat’s handling of the small household and a later surprisingly real moment between Anastasia’s adult dream-prince and his mother, who chastises him for going out so often instead of studying, give the film a humbly, humanly whimsical air; the film feels unhampered by a need for real magic or fable pastiche. Sleeping Beauty stumbles somewhat when, in this lightly held grasp, it tries to evoke relationships between the children-now-adults—as kids, Breillait’s pointedly self-aware direction of the actors, their cutesy preciousness and forthright lack of surprise is fairly charming; as adults, they seem to be going through the (attractive) motions to move the film to its clever moral.  The dream-prince is the weakest link, despite his younger, queen-obsessed self having some of the film’s finest moments of kindness and spurn, is a neutral presence in the tale, and squanders, somewhat, the air of tendercarefreeness that allows the film to flirt both with the heartfelt and the heart-hurt. 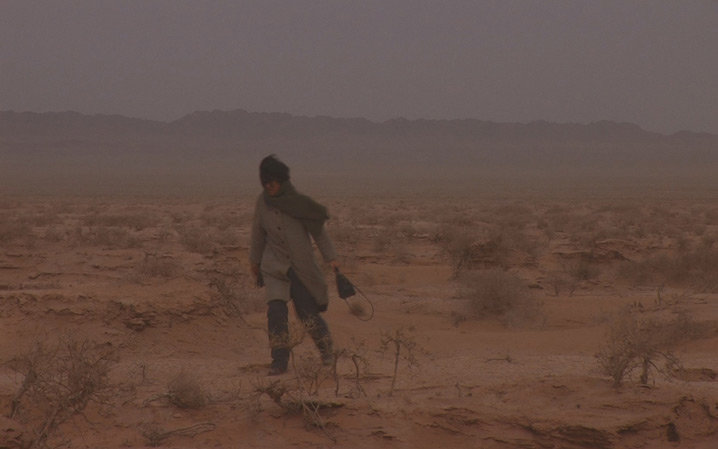 Renowned documentarian whose documentaries I have never seen Wang Bing has made a tremendous, compacted, and pressingly physical fictional debut with this digital film.  Set in 1960 in a worker re-education camp in the steppes of the Gobi desert, work in the camp, on the titular ditch, is halted at the onset of the movie as the worker-prisoners are so infirmed and starving they are no longer able to continue construction.  The camera quickly descends into their domiciles, which are essentially dirt pits underneath the level emptiness of the parched landscape above.  We then watch in the meager lamp light at night and in the daylight straining to reach these putrid home these men swathed in crumbled blue uniforms sleep, starve, and die.  It is an utterly wretched film—in effect, not in quality.  Wang has transitioned to fiction most successfully by focusing on the space of the dormitories, the rectangular corridors of dirty blankets covering weary skeletons.  Bedridden or barely shuffling around, the immobility under all that empty space is incredible; the most moving moments are when the men grasp others, pulling themselves closer to hoarsely express final wishes, or tearfully recite a letter home, buried under blankets.  The film impresses immediately the importance of eating to such a degree that a major event in the film is the on-screen revelation of a bowl of noodles, which looks positively lavish and absolutely delicious after following the crawling, stumbling men with their sack-like weight barely holding onto life.  Midway through the matter of fact observance of this suffering the film starts to inject some fiction, some melodrama in the proceedings, starting with a wife who shows up to find her husband dead and the body abandoned in an unidentified grave.  Her singular instance on not leaving and finding him and her continuous wailing at first rings false against the minimalist picture of those straining for life and those fading away, but quickly her explosive emotion takes on a extra-cinematic quality, acting as a kind of witness and release valve for the spectators, venting oceans of angst and frustration in place of the men who are too weak to do it themselves.  Like Michael Mann and David Fincher before him, Wang is shooting a fictional period film in highly contemporaneous-looking digital.  His bare, undramatic camerawork, which creates continuous space between desert and dorms, workspace, livingspace and deathspace by moving between them all in single takes, and then breaking away with awkward but often pointed edits, like the image of the wife collapsed on her husband’s corpse with piles of corpses clothed in fading colors splattered across the background, is so physically grounded that the film retains a profound, ambiguous quality of documentary.  The video-film then becomes both an act of preservation—reconstructing and keeping alive these experiences already fading in memory—and an act of intervention, a reminder to the most basic forms of human suffering, its unforgivingly simple pain and pathos in the unfailingly now appeal of its pitiful, exiled hardships.

Finally seeing more films by Guerín (In the City of Sylvia) is a pleasure, but it is a conflicted pleasure in its reminder of some of my problems with the way that film’s images and ideology interacted.  His new work a video travelogue that he made during his trips around the international film festival circuit with Sylvia—except, instead of a picture of film festivals, he turns his camera on their host cities to find, firstly, in his hotel rooms and nearer the festivities, internal, private reveries, and, filling up the bulk of this overlong film, going to city squares and into residences to capture some images and sounds of public life.  At first it seems an admirable mission, to show that during the cavalcade of moving images about the world around us there is another world going on at the same time, uninterested in (though perhaps not disconnected from) the world of cinema.  There are the stories in the festivals, the stories of the festivals, and then all the myriad of stories elsewhere.  The problem is, despite its lengthiness, Guest is focused primarily on evoking this sense of other things going on, other concerns,other lives, other expressions, instead of being authentically or perhaps more precisely being more exhaustively, more pointedly, more truly interested in these goings on, concerns, lives, and expressions for themselves.  In the structure of the film, they are belittled by being an acknowledged aside to film festivals; as if, without the festivals these people, their talk and their stories couldn’t have been found and told by Guerín.  Instead of making a documentary on one or many of these people or places, Guerín has made a successfully evocative essay film on the idea that these people could be a subject, rather than making them the subject itself.  It sounds like a subtle difference but it makes all the difference in the world.  One interviewee remarks of another man, a poet amongst other professions, that he can’t tell the difference between poetry and reality, and I wonder if Guest’s admirable contents, despite its beautiful, lyrical travelogue snatches and often interesting human stories, confused the reality of these places and these people with the poetry of the project.  For it is the poetry that remains above all, and it can be a wonderful thing, globalized and full of detail and affinities, public life’s and private asides, quick snatches of observation and long, tedious searches through a dialog or a room for something of meaning.  But ultimately it is all subjugated to its purpose of poetry, of a gestalt expression, rather than of a hard-looking exploration of reality.