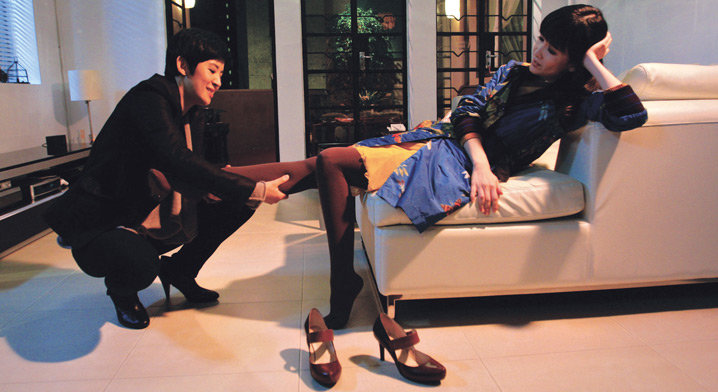 The second strong film from this Hong Kong new wave filmmaker this year, after Rotterdam’s Night and Fog, proves that even if I lost track of Hui after her first couple films, her contemporary work is of supreme craftsmanship and expressive control of drama and mise-en-scène.  This film really purrs in its first half, where Hui calls up the social message melodrama of Night and Fog for a lesbian romance as packed with didactic basic human equality messages as it is sharp, clear-eyed drama.  With considerable agility the film follows two old flames (Sandra Ng and Vivian Chow) who bump into each other at a single-mothers pregnancy meeting and re-kindle their past relationship.  Hui follows them as they trek up and down Hong Kong’s hills at night, not quite willing to follow one or the other into one of their apartments for the night, but not quite wanting to end the lovely evening either.  Meanwhile, the film flashes back to how each of these mid-30s women got pregnant accidentally amidst their relationship despondency and constant flings, all handled with a light, but wise touch byHui.  The film stumbles when, after this initial, almost Lubitschian activity of almost, sort of, used to be, and what about now lovers, the narrative is burdened with figuring out some kind of psychological drama to get in the way of the couple’s already-clear happiness—and unfortunately that burden falls to the incapable dressed up doll that is Vivian Chow.  At the same time, Hui has to juggle the script’s addition of another lesbian couple and each of the babies’ fathers into the mix.  (Grossly ignoring the fact that Ng was impregnated by a former wife-beater who turned over a new leaf but cheats on his wife with Ng…who got pregnant…and the wife is never mentioned again!)  Four couples, six people, and two babies needs a much higher level of frenetic insanity to keep the scenario moving so fast we can’t do the math—Wai Ka-fai’s The Shopaholics (2006) comes to mind as a film that ratchets up the giddy speed of its drama to such a degree we barely can see how superficial what’s moving really is, and the last half of All About Love does not need Hui’s level-headed approach to solve the impossible relationship equation.  What the script needed was rather someone who recognized the inherent wackiness of the end result, but unfortunately Hui means too much good in the all-people-deserve-love-and-families message to miss the silliness of her script’s means to express it.  Best to stick with the film at the beginning, when Hui’s approach tempers the potential whimsy of the meet-cute and how-it-happened with a combined honesty of age and emotion, eloquently location based mise-en-scène, economic editing, and flares of romanticism that seems judiciously tied to her characters and their lives. 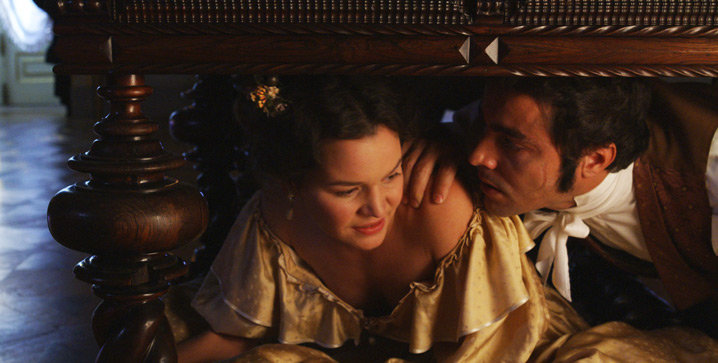 Raúl Ruiz is one of the great cinematic self-perpetuators, like Louis Feuillade and Jacques Rivette—a film like this gathers a motion and a rhythm that makes it feel like it could on and on, self-generating new stories and new characters ad infinitum.  Based on the novel by Camilo Castelo Branco (whose writing has been the source for Oliveira’s similarly fatalistic romance, Doomed Love), Mysteries of Lisbon is, to paraphrase a line from one of its many characters used to describe a disastrous relationship he had, a game that turns into a bourgeois romantic drama, to which I would add, that turns into a game.  It starts—as all stories must?—with an orphaned boy questioning his parentage and falling into a fever, and out of that starting point the film evolves less as a story than a cartography of characters crossing points in space and time.  On paper it is indeed all melodrama: identities revealed, lives saved in the past coming back to haunt the saviors, secret connections, loves turns to hatreds.  But as traced by Ruiz’ oscillating tracking shots, which arc back and forth across rooms, pleating our view onto itself, folding time and space and people, the 19th century soap opera is transformed into an oneric submergence into ill-wrought fate, stories-within-stories, the nesting of all things, and the mysterious system which, quivering with ironic mirth and melancholy, holds everyone in place.  This elegantly languorous, epic film (four and a half hours long), carries with it a paradoxical sense of infinite expansion outward, with each new character, each new place a new story, a new irony, a new connection backwards and a suggestion thrown forwards, yet this expansion seems to exist within a closed system.  If this closure is not the film itself, which must end, than it is some other, secret measure of control that binds the interlocking orbits of people and their passions in space and time and does not allow them to escape.  Perhaps the Mysteries are both expanding and elastic? Certainly a model for the universe, if that’s the case.  As for the bourgeois drama, everyone’s fable-like unsurprise at the strange motions, histories, and identities of those characters around them opens their simple emotions to a greater cosmic plane, as if they have an awareness they have to live both in the elastic, restricted world (of their society, of a normal dramatic film) and one that has mysterious, expanding mind of its own.