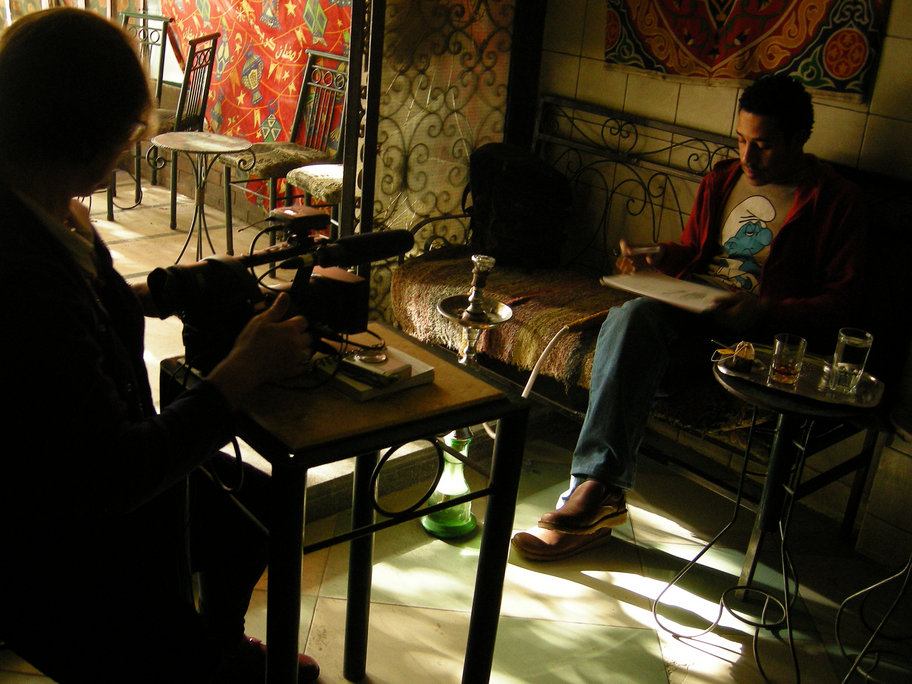 Hala Alabdalla's new film goes much beyond its pitch and its "subject matter." And it takes the viewer much beyond the surface of a "human rights" manifesto. Paris: a film is being made. Locations notes, documents, e-mails, Skype chats and preparation video diaries have become the main material of Hala Alabdalla's project after the events in Tunisia, Egypt and Syria have started to change the face of the region. Her film project about caricature in Egypt and Syria transforms under our eyes into a feverish meditation. The film still questions the place and role of caricature under dictatorial regimes and after these regimes have started to collapse. Yet it has become a larger reflection upon Art as it is understood and looked up to by many intellectuals of the Middle East whom we know so little about. Whether graphic designer Hazem Alhamwi, essayist Samar Yazbek or caricaturist Ali Farzat, all those with whom Hala Alabdalla meets share high ideas about what being an artist means. Hence their amazingly intense way of describing and analyzing their personal path: the fight against fear and the poison of compromise, the torment of feeling powerless, the sense of commitment, the loss of illusions, the temptation of withdrawal. They all know how powerful images can be and how much irony is a threat to all powers. At the beginning of the film, writer Samar Yazbek defines caricature as "a form of bitter intelligence." Later, "As if catching a cobra" is Farzat's metaphor to describe a constant and exhausting effort to outmaneuver the dictatorship, its police, spies and bureaucracy. Dictators fall yet other "snakes" come or survive: pressures and control come today from the religious authorities, the military, the big companies, the corrupted bureaucracies, the old prejudices (against women or against minorities). In her editing room, the director assembles a shot of Damascus under the rain and a song of longing, the sad eyes of the exiled writer and the sun over Tahrir Square. Poems are heard where the desire to live challenges the fatality of death. Voices are heard: not "interviews" but people thinking out loud. Images, memories, poetry, hopes and torments are composed into a chorus. The film is a lyrical journey to a country that still exists only in the editing room. The editing room as a heart and a mind.﻿