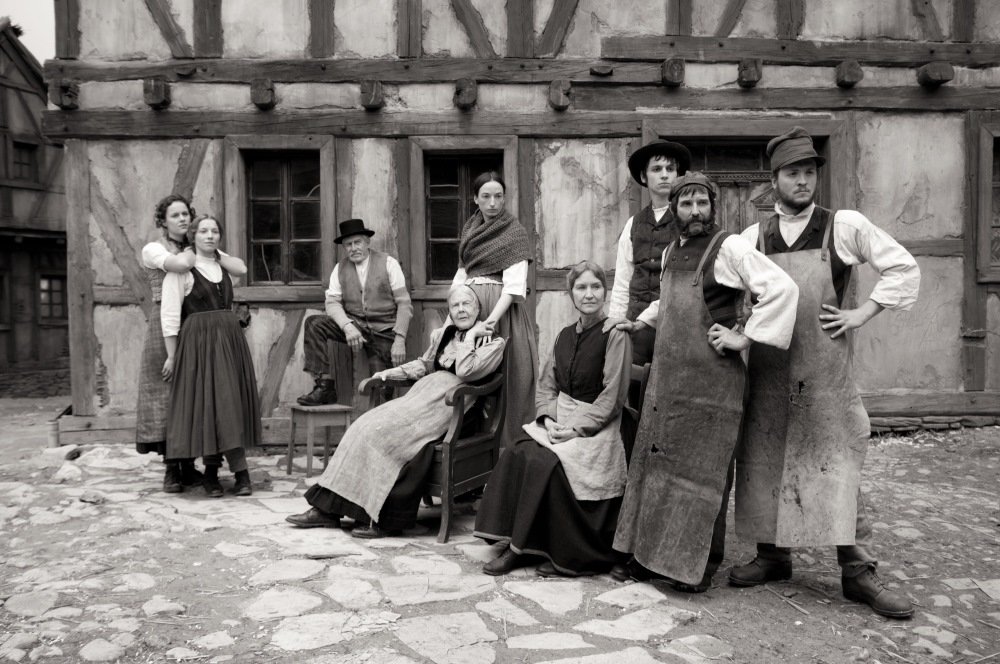 Above:﻿ a publicity image from Home from Home: Chronicle of a Vision.

I'd like to tell you today about a few films I don't think you had the chance to see. How strange that with what I'd like to think are similar tastes and sensibilities, that let loose in a playground for those very things, we sometimes take such divergent paths? I suppose that's what I was getting at in my first letter to you. Are these our choices, or fate...or perhaps a bit of both? Miyazaki's wind? Towards the end of the festival, I saw you at more movies, which seems to heighten my critical faculties, being under pressure to compete against your utterly apt and evocative wordplay! I must admit, it is somewhat a relief to know that you want to write about something that I liked (the Gomes short, The Strange Little Cat, Starred Up), it lets me keep my thoughts a bit unformed, a bit secret; and meanwhile your characterizations are so terse and precise, a justice done to exemplary cinema. Or perhaps a gesture, a gift in thanks for something that touched or intrigued you. These films, though, I don't believe you caught, so the ball is entirely in my court.

In my last letter I wrote about two kinds of imprisonment, that of the body that of the mind. A more mystical and cinephiliac exploration of imprisonment was taken by the form of Shambhavi Kaul's Mount Song, a sneaky montage of clips of empty studio sets from what looks like a variety of Hong Kong films from the late 60s to late 70s. Her edit forms a pathway—and a cryptic, elemental story of a journey taken first by the wind and later by a neon, animated bird—through these between spaces, unusual footage fragments of vacant, shadow-shrouded sets clipped, presumably, from the beginning and ending of scenes, or from humanless special effects sequences. Kaul's fecund color choices and smothered lighting in cinemascope (Shaw Scope?) cast these trapped spaces as simultaneously shabby and uncanny, rendered all the more tentatively strange due to the clips being from medium-resolution sources.

As Stephen Broomer's Pepper's Ghost attempted to use optics and edits to push deep into the frame on the z-axis, Mount Song's story wants to move laterally with its teleportive properties, pushing from one frame into another, from one set to another, one film to another, like moving through a railroad apartment. As such, it creates its own mythology, one linking the spaces (and films) and empowering the mysterious movement of the journey between them. Yet, of course, this movement is above all that of the filmmaker, a cinephile's pathway, guided by a personal logic of favorite moments, exquisite effects, embroiled pigmentation and near-barbaric tonalities. Is the triumph then, the source of the mystery, that of the artist-critic, or does this example of digital, productive cinephilia create a newer, more special space outside that private belief in this fantastic, artificial mythology?

Trissákia 3, an eloquent cinematic assemblage by Nick Collins of a deteriorated 13th century Byzantine church in Greece, is a realist, historical, and religious counterpoint to Mount Song. Shot silently in 16mm, the film captures the way light and nature have found their way into what was previously a site for religious ritual and worship through discreet images of time encrusted paintings, crumbled walls, unsuccessful restorative scaffolding, faded paint, encroaching foliage, and new holes puncturing through the structure. A gathering place has become derelict, a space with little use but as a fading record of a once-unified construction full of history and faith. Collins' exploratory, diary-like movement around it purposely neglects to connect each fragment, unlike Shambhavi Kaul's mystical joining. Instead, the fragmentation lends a minute holiness to side-by-side coexistence of ruin and structure, stone rubble and faded icons. Or perhaps coexistence is the wrong term, as the moments Collins has captured are a frozen sample of time's passage through this space, changing it dramatically ages after its inception and inhabitation﻿.

These two films were programmed in a set of a shorts titled "Elysium," which is an interesting and, for me, sorrowful interpretation: a utopia constructed from empty artifice and one referencing the hopes of a paradise from long ago. A more textual but still slanting discussion of elysium forms the conceptual center of Edgar Reitz's Home from Home: Chronicle of a Vision. I have not seen Reitz's canonical Heimat epics, which obviously puts me at a disadvantage in discussing their continuinities in his return to the idea of envisioning Germany's rural histories in what the German title translates as "The Other Home" or "The Other Homeland": Die Andere Heimat﻿. But I still found this new history an engrossing one, especially as it connected to Albert Serra's Story of My Death in hovering period specific intellectual-cultural discourses around the meat and potatoes of historical recreation and drama.

The utopia here, unseen for the entirity of the film's near four hour runtime except in a very moving letter read at its conclusion, is Brazil. Set in 1844 in a rural German countryside beset by poor harvests, erratic weather, and slow motion recovery from the Napoleonic wars, the region if not the country is also suffering depopulation from hopeful emigration to a far away new world. Reitz chose as his hero a dreamer-intellectual son of a blacksmith, the youth's bookish obsession with overseas cultures, languages and utopic visions of the "tropics" making him an outsider within his Protestant-proletariat community. The practical facts of the livelihood, worries and dramas of this particular class and location are what forms Home from Home's story, but its constant tension is how these rural lives continuously, tragically thwart the imagination of the area's lone soul capable of so deeply embracing a vision of paradise. The vision of the title is indeed this 19th-century, scientific-rationalist idea of heaven on earth—an abstract heaven whose form is imperialism which will later become enshrouded in and bound to nationalism—dealt with on the practical level of a year in the life of a normal village-dwelling family, their work, romances, and deaths. Much in the way Miyazaki evokes a giant, greater human canvas behind his small personal story in The Wind Rises (another film with hopes of elysium), Reitz's inky-black, hyper-sharp digital cinemascope images make Home from Home at once grossly expansive and frighteningly intimate. It is a triumph of scale for a film for which the inner world of dreams and the outer world of practical facts must be equally contained in the cinematic image.

Ending a festival on dreams of utopia, is that a good idea Fernando? I haven't seen much evidence of such place here in the cinema (though some films, like Ben Rivers and Ben Russell's A Spell to Ward Off the Darkness or the ethnographic documentary short Natpwe, the feast of the spirits, are actively looking in today's world). Actually, only Robert Beavers' Listening to the Space in My Room seemed to truly encapsulate someone's real world, actually existing vision of paradise. Except, as Beavers told us, the house which he documented he recently had to leave: so now his record of a current paradise is instead images of the past, ones capable of dreaming.

And meanwhile, of course, one always hopes the festival will be a paradise, a resplendent filmic garden of masters and masterpieces. Can it ever be? This year I saw an abundance of rich and varied cinema, but I don't think I've ever attended a film festival that lived up to a cinephile's aspirations of utopia. Too complex an organism to ever satisfy that vision or that hope, every festival, every year I nevertheless dream of the very best.

Until next year, then, Fernando, when we together will no doubt experience dreamed for festivities.