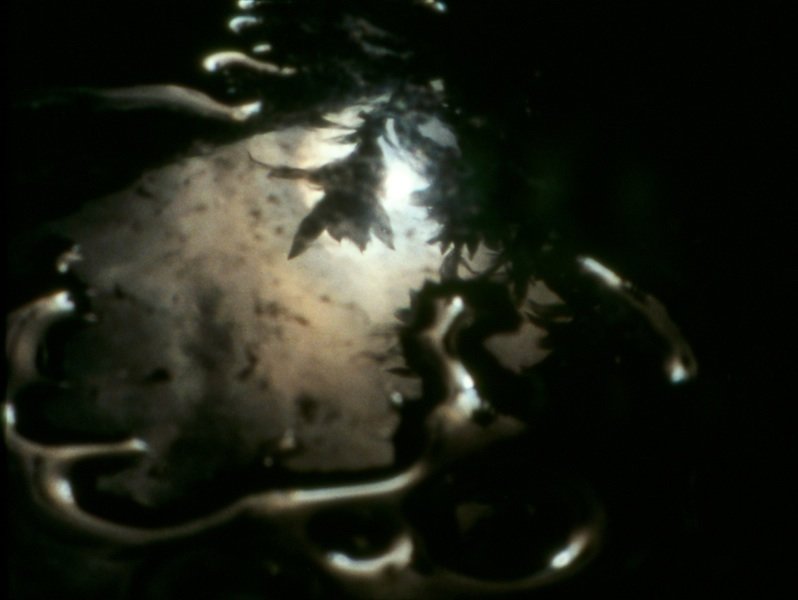 Above: a still from Nathaniel Dorsky's Song.

To my beloved friends Danny & Fern,

Reading your “Correspondences” during TIFF last year brought me close to a festival I wasn’t actually attending, perhaps closer than any other coverage I had read before. This year I made the trip but was surprised to find your pieces still brought me inside something I wouldn’t have been part of without them. Film festivals are, of course, about the films and filmmakers, and perhaps everything else is just window dressing, especially to a critic or cinephile. However, the more I attend the more I realize how things aren’t as separate as they first seem. There are the films; the filmmakers; the press; guests; staff; volunteers; the venues; the parties; the meals in between screenings; the weather; friends; karaoke; confusion; mistakes; surprises; missed opportunities; that film that fell through the cracks; late nights and early mornings; tears you shed; tears you witness; screenings where you have to struggle to keep your eyes open; espressos, espressos, espressos; and the pressure not to just watch but to write (which changes everything). If once I thought that the totality of the festival experience was something one should keep out of their coverage, and really, I still am hesitant, I’ve begun to feel that when I write exclusively on films, I’m only writing on part of what happens and those details I neglect impact how one takes in the films themselves. Seeing a film at a festival is decidedly distinct from other settings for these reasons and more. How to approach that with writing is a tad tricky. Your pieces, though, have found a nice way of focusing on the films, what they made you think about, while also placing them in an honest, more complex context.

What has been particularly illuminating for me is the idea that, ultimately, the festival experience is something intensely private. This may surprise both of you but I do feel this sense of solitude: you’ve watched me have fun, share laughs, opinions, drinks, and questionable dance moves with myriad fellow festivalgoers throughout our time in Toronto. We’ve all talked about movies together (though isn’t it interesting that our best conversation had nothing to do with the festival at all but concerned Hitchcock, Ford, and Mizoguchi?) and enjoyed each other’s company, but in the end, we all saw different films in different settings in different situations, watched and worked according to our own personally carved out schedules. There are, of course, overlaps in what we saw, and these intersections are so key to connecting, but even so we may have seen these films in differing timeslots (one would be foolish not to admit that what time you see a film doesn’t affect your viewing and also what order and positions one sees films in on any given day). All three of us are returning home, spread out miles apart from one another, with entirely unique experiences, a unique set of memories, and most certainly diverging interpretations of the festival, the films, and everything in between. Indeed, thousands of people are returning home with these unique thoughts and feelings. Therefore, a festival is almost paradoxical: a place where pleasure is derived from sharing, and yet there still exists a gap, seemingly unbridgeable. I think I am at my most and least alone at festivals simultaneously. I wonder if you feel something similar. These correspondences don’t bridge this gap but they point to it, I think, shedding light on the intangible qualities of navigating a festival alone/together and how this aloneness and togetherness is something that cannot be separated from the festival and the films we see there.

I’m on a plane as I write this sentence, and my heart swells tenderly with fond memories of my friends and profound regret to be leaving them behind. Normal feelings, I know. But going from festival to festival, this strain in my chest snowballs past the point of tolerance. Film festivals feel like home to me. I’m happy “there”—if we can refer to festivals as a single place not bound to physical space, a global musical chairs where different combinations of critics and audiences convene. For me, festivals are also a place of perpetual heartbreak. I’m always falling in love with films, people, and places—and then in a blink of an eye am cruelly yanked away from them. I find that festivals have a tendency to facilitate accelerated friendships. To begin with, it’s easier to relate to people when you know they share, in some form, our (sick?) love for cinema, but it’s much more than that and I fear I can’t do it justice with words… There’s an inherent openness, a heightened sense of emotion and closeness. Maybe it’s the higher stakes (“I may not see this person or these people for a long time…”) or everyone’s simply in an especially enthusiastic and social mood. Really, I think it has something to do with being “separate” from real life, placed in an environment where you almost have carte blanche to present yourself to people who probably don’t know what you’re like at home. It’s always easier to tell secrets to people who don’t know you so well. It’s always difficult going back home without them.

Danny, you and I attended one of the best screenings at the festival together, along with Darren Hughes. Presented by our friend Andréa Picard﻿ in the festival’s strongest section, Wavelengths, we saw a 90-minute, entirely silent program of three shorts. Two were by Nathaniel Dorsky (Song and Spring), and one was by Peter Hutton entitled Three Landscapes. I was excited for my first experience with Dorsky, and I think you were excited to see how I reacted. I was floored. It’d be impossible to describe Dorsky’s visions, they are now distant dreams to me, forgotten upon waking. I adore them and they have enriched me. Do you remember that in between Song and Spring there was an unusually long leader? The lights didn’t come up, so, having already been in complete silence for thirty or so minutes, the audience now additionally faced complete darkness together. The symphony of gurgling stomachs that had permeated Song had quieted. My eyes grew heavy. How lovely would it have been if the audience we’re permitted to just fall asleep together? The idea struck me then and I keep thinking about it, a sort of preschool naptime for weary cinephiles in the middle of a festival. Imagine filing into a darkened cinema to take a collective nap? It sounds silly, but I was able to get an inkling of what it would be like, not just a much needed spot of rest but an effort towards bridging that gap of private and shared experience. Even so I guess our dreams would be different...maybe they could be projected on the screen, overlapping, as one Wavelengths-worthy experimental film, washing over our closed eyes.

And that’s not the only wonderful thing that occurred during that screening! During Three Landscapes a vehicle on a farm collects hay off the ground before inexplicably squeezing out (you almost could here a comical “POP!”) a perfectly round thick disc of hay as if from nowhere. While everyone else remained completely quiet, you burst out laughing and I soon followed, which made it harder for you to keep from cracking up and vice versa. I knew why you found the image so funny, a sort of unexpected visual absurdity, so physically strange and goofy. My theory is that someone has to have played Katamari Damacy or Noby Noby Boy to have gotten in on this one, and I’m glad we both have. For whatever reason, as we both struggled to hold in our laughter so as not to disrupt our neighbors, I felt the least alone I have in a cinema in a very long time, a momentary bridging of that gap. I expect I won’t ever forget this.

The screening was followed by an awkward Q&A. Dorsky declared the projection the worst he had ever seen (something he probably could’ve mentioned afterwards to the staff rather than embarrassing them in front of the crowd). It was odd. I had noticed the projection was out of focus but was never certain it was not intentional. Regardless, the films had moved me so much, and now the man who had made them made me feel guilty for it. I had tried to shake it off, but it’s a tainted experience now, but perhaps an instructive one regarding how external context frames how we feel about what we see. When I began writing this, I had planned to bring up a couple other negative things at the festival, such as the poor management that would result in failing to fill seats at the free TIFF Cinematheque screenings, despite the demand being higher than capacity, the separate floors of the Bell Lightbox somehow as disconnected plains that staff/volunteer communication can’t penetrate. But I don’t think this letter is about that sort of thing. I think it’s more about something like what I witnessed at Hayao Miyazaki’s The Wind Rises. That film broke my heart and mended it many times over, but more significant even was what it was like to be in that audience (a public one as I couldn't make the press screening). Audible tears from men and women sitting around me allowed me to be less self-conscious about my own. When the film ended, and the credits rolled (with accompanying stunning watercolor paintings), no one stirred, no one thought of getting up, even the lights didn’t come up, as if the projectionist was equally entranced. When the credits finished and everyone filtered out, there was still reluctance to leave. Some people didn’t. I saw a twenty-something couple: The man had tears on his cheek, and his partner rubbed his shoulder and kissed him. I saw a Japanese family near the front, a mother and two boys, one of whom was still crying. The mother was whispering something to him and his brother was hugging him. I wonder what she said to console him?

In my heart of hearts, I don’t know if I go to festivals for private or shared experiences. I think it might be a wild goose chase for the latter. Rather, could it be that we want to be in proximity of other people’s private experiences for a change? Maybe it’s as if we all meet in a place in order to situate our private viewings next to each other’s—there’s still a gap, but it might make a difference, to be closer if still apart…I don’t know. I’m new to this as you both know, having only been traveling to festivals for over a year. I’m still learning and this is a record of incomplete feelings. My plane is landing soon back in Vancouver where another festival awaits me, my first time serving on a jury no less, another new way of interpreting this world that is much more complex than just a curation of films at a handful of cinemas. I certainly hope we get to continue this journey together, in whatever capacity, because, in candor, I don’t think I can do it alone.