“They say this place here is haunted.
Yeah, but only by a ghost...”

It’s a good way to burrow in, those SUPERIMPOSITIONS. Those defiant anti-subtitles. “I’m having FONT issues...” Walken whines somewhere. Me too. My favorite is in Domino: the fabulously absurd and banal, the “with Dad” that over-clarifies that the guy who looks nothing like Lawrence Harvey (who ever did?), that guy we’ve just seen in The Manchurian Candidate in 1962 is, in the diegetic account, still alive, and still her father in 1993. Markerian is supposedly the word for this.

Superimposition of text—against and over the weak image. Godardian buttressing. Or Pop Art. Or Tele-visual Density. Or further smearing on the frame. All those suspect culprits are tied in his movies to a certain re-mix aesthetic that was already present, incredibly, in The Hunger. But had to go underground as Scott worked his way up through the corridors of power to independence. And death.

That opening sequence in Man on Fire also tells us that we can think of his films as Ruizian objects, that is, as a series of infinite, impenetrable, indivisible films. Monads clustering in the mind according to their own oneiric logic. This is a heritage from the never static, recombinant and experimental world of advertising, and what drew him, fatally, into Bruckheimer’s orbit and into the flabby preludes of success.

It’s not enough to say that Scott is painterly (his brother, after all, could be better accused of this slur...) we should say which painter: Gerhard Richter. Who as a virtuoso youngster had already named and invented Capitalist Realism, and who actively re-engaged with photography and television, amid the post-war “weakness” of the image. But this can only go so far. A painter who zooms and demands you touch and live for a while in the installation or the non-site is what we usually call a sculptor or a Land Artist, which probably shows the limits of these eternally damned multi-media analogies. So, call the cops. Cinema is (was) impure. 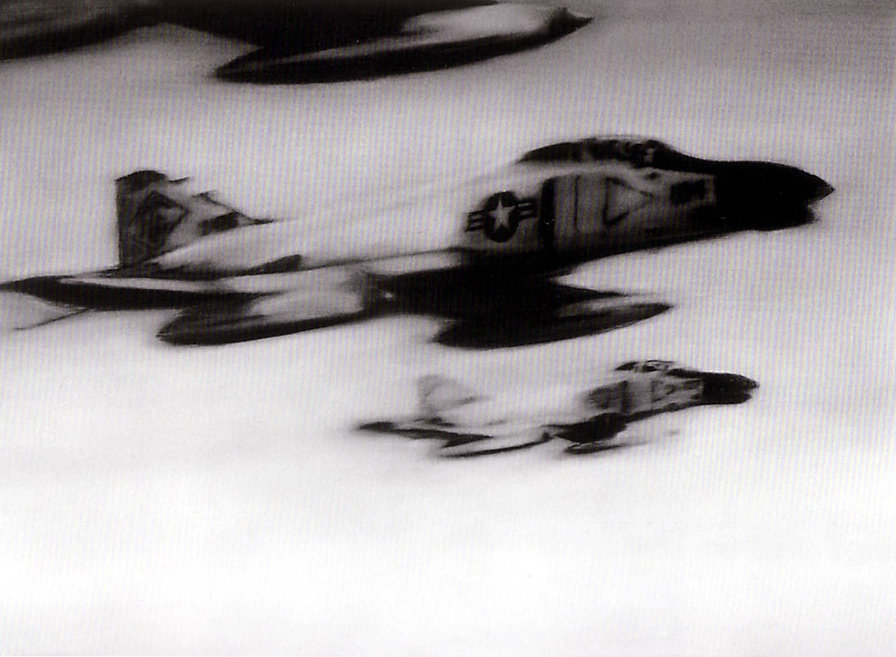 Smack! The sound of the artist running up hard against the fascist critical preference for the “strong” image over the weak. The little man rage of cadrage. But this is nostalgia, mostly. Rather than a few strong, bruising images (check out John Ford, Goya or Turner or Riefenstahl if you’re not exactly sure what I mean), we have billions of weak images. Images for all occasions, diffused away on screens of many sizes, images like pouting cultural revolutionaries holding up Mao’s Little Red Book. Just another fucking crowd.

We may not like it. But isn’t the weak image the only honest, the only contemporary way to make them? That seemed to be the chief of his humilities, Tony Scott’s central artistic question. This made him a paradoxical spirit-comrade to Eno, always working towards the unmanly cinematic equivalent of ambient or generative music. But Scott had to pretend. And do it successfully. If the Hollywood Ideal is the rockstarish, Wagnerian total work of art, the perfectly “clear” and “readable” iconostasis, then Scott’s obsessive tendency towards abstraction, the insane hemorraging textures of Mexican movie poster lithography, and “weather”—of atmospheres co-existing uneasily with the death instinct (the train-like demands of narrative, the deal memo, and the pseudo-precision of sellable, selling advertising moments)—then these late films are the ultimate devil’s deals.

MISE EN ABYME: THE STYLE OF HIS ABSTRACTION

Re-inscribing coverage as surveillance. Adding screens to the diegesis so that they can function as wormholes to further abstraction. Anything to get away from the homely tyranny of the single camera, of the set-up, of generic intensified continuity mise en scène. Garrelian light leaks. Textures. A post-digital recovering of the “cinematic” artifact. Artisanal devices recovered from the impressionism of Gance, L’Herbier and Jean Epstein, double-exposures, hand-cranking...and not least of all, a Don Cammell-like devotion to the spiritual ellipse.

Spy Game. A cold war rehash of Casablanca where Rick and Laszlo fall in love with each other at the pool’s edge, that is, with alternative love-distorted versions of themselves.

The scene takes place in Berlin, on a rooftop. Bishop, the idealist played by Brad Pitt, has just returned from a blown mission where the man he was responsible for has just been sacrificed to unclear shifting priorities above his pay grade. He confronts his own handler, the older, wiser and morally compromised Muir (Redford). It’s the key scene of the picture. And it’s essentially conventional in staging, a sort of classic version of intensified continuity.

Establishing shots are left, in the Scott style, to a gyro-cam on a helicopter circling the building. Muir, still in a tuxedo from last night’s embassy party, is sitting at a table and Bishop dashes up the stairs. When Scott cuts in, it is with his usual long lenses. The perfect chilliness of Redford, looking like distressed, rotting morocco leather, and whose wraggled face is here meant (as it did long ago in Downhill Racer and The Candidate) to symbolize a certain REDEEMABLE corruption, endemic to Cold Warriors or studio executives perhaps, is set against the “warmth” of Brad Pitt, the golden boy of the moment, appropriately a bit out of his depth, whose character is transparently telegraphed in the indicative as Boy Scout, who works and plays altogether too well with others.

Bishop accuses Muir of using people, trading them like baseball cards in a Great Game. Muir calmly defends the idea of the long game, of the impersonal and divine view of the master spy, an outlook that the disciple must eventually come to share, or leave the field. Scott’s camera jumps to stay on Bishop, with all his righteous energy, but is in turn absolutely held transfixed on Redford’s crags, as it seems to endorse Muir’s enlightened position. Muir tells Bishop to find another metier. Go on, walk, he says. And then comes the only real surprise in the whole scene. A ghost of a smile, a fleeting smirk plays on Bishop’s face. The “game” is still on. A recognition of a mutual destiny that must be played out.

Muir warns him that if Bishop does not follow his orders, if he “goes off the reservation” that his mentor will not go after him. He will not be saved. He will be crossed off. Muir stands up, Bishop mutters something petulant, and Scott cuts back to his beloved helicopter shot. It is characteristically strange of Scott to use this long shot from a moving platform to carry the final emotional punch of the scene. The kiss-off, the farewell line comes: “They (Muir’s generically implacable rules of spycraft) saved your life.” meaning literally, from a supposed threat of the previous night, but also recognizing his success in reeling the young man right back to the proper operational edge of near-but-not-total nihilism. Muir physically turns his back on Bishop, the whole world gyro-spinning as hot white steam from a vent partially erases their bodies. But what’s fabulous, and adds poignance to this virtuosic moment is that the camera “helps” to turn Muir’s back, emphatically wrenching us, as it reorients the staging. Letting the full weight of the scene fall on a chance glimpse caught from a far away helicopter. Not bad.

Now, in Casablanca, Laszlo stands for something. So Rick’s move towards commitment is also a political as well as an altruistic personal move. In Spy Game, when Muir later in the film acts to violate his announced principle of non-intervention, it seems it is to rescue another model of himself. Muir is always willing to pay the price when he is in the field, but surrounded by the cutthroat politicians at his show trial at Langley, he reflexively breaks his rule, so as to say: “I’m not like you.” So it’s less a Borzagean love story between two men, as Ignatiy suggests in his lovely piece, but something weirder still. Anticipating the pretentious New Age vanity of The Master, they are two versions of the same soul, transmigrated by the moral drifts of the Cold War. It’s as if the younger self, having chosen the personal, sacrificial path of idealism, compels the older version in magical traction to do the same. This is, again, another Markerianism that predicts the timecuts and shifting selves of Déjà Vu.

He jumped off a bridge. Inevitably, it casts a pall on things. Whatever the cover stories, what really killed Tony Scott was the power of middlebrow opinion, lamely expressed; a clumsy hit squad contracted long ago. A professional or personal need to be kewl attracted him to certain rubbishy stuff, like Tarantino, or Richard Kelly’s I-ching meets Hollywood Squares style scriptwriting. The subtext-free is always tempting. But subtext must always out, like Pasolini lucidly said and also discovered for himself (1), at the final cut moment of your death. But there is also a triumphal rejection of something, too, in all this bleak history: the oh-so-polite fate of the sweet, genteel Englishman in Hollywood.

Beat the Devil to a pulp, Tony.

I must now tell you my thoughts about death (and I leave my skeptical readers free to wonder what this has to do with cinema). I have said frequently, and always poorly, that reality has its own language—better still, it is a language—which, to be described, requires a general semiology, which at present we do not possess, even as a notion (semiologists always observe distinct and

definite objects, that is, various existing languages, codified or not; they have not yet discovered that semiology is the descriptive science of reality).

This language—I've said, and always badly—coincides with human action. Man expresses himself above all through his action—not meant in a purely pragmatic way—because it is in this way that he modifies reality and leaves his spiritual imprint on it. But this action lacks unity, or meaning, as long as it remains incomplete. While Lenin was alive, the language of his actions was still in part indecipherable, because it remained in potentia, and thus modifiable by eventual future actions. In short, as long as he has a future, that is, something unknown, a man does not express himself. An honest man may at seventy commit a crime: such blameworthy action modifies all his past actions, and he thus presents himself as other than what he always was. So long as I'm not dead, no one will be able to guarantee he truly knows me, that is, be able to give meaning to my actions, which, as linguistic moments, are therefore indecipherable.

It is thus absolutely necessary to die, because while living we lack meaning, and the language of our lives (with which we express ourselves and to which we attribute the greatest importance) is untranslatable: a chaos of possibilities, a search for relations among discontinuous meanings. Death performs a lightning-quick montage on our lives; that is, it chooses our truly significant moments (no longer changeable by other possible contrary or incoherent moments) and places them in sequence, converting our present, which is infinite, unstable, and uncertain, and thus linguistically indescribable, into a clear, stable, certain, and thus linguistically describable past (precisely in the sphere of a general semiology). It is thanks to death that our lives become expressive.”﻿