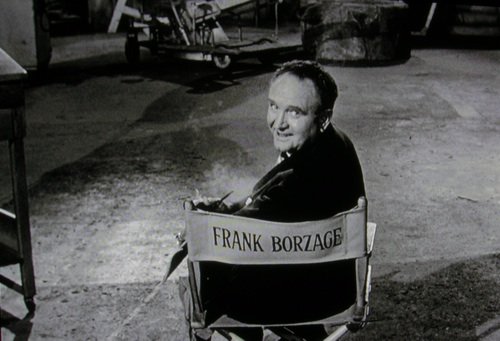 "Time just gets away from us." Thus, the penultimate line in a great American novel that has recently been transposed to cinema yet again. I cite it as my meager excuse for not being able to offer a more thorough consideration of the items I've chosen to treat in this particular report. Said items being two out of the three recent Blu-ray discs released on the French label Carlotta, presenting three (actually, more than three, but we'll get to that) silent-era masterpieces from the American director Frank Borzage, all of which have been previously made available in the States via Fox Home Entertainment's wondrous 2009 box set Murnau, Borzage And Fox. These being 1927's Seventh Heaven, 1928's Street Angel, and 1929's Lucky Star, Borzage's penultimate silent picture. My excuse for not having been able to check out the Blu-ray of Seventh Heaven I can put down to a cause unrelated to myself, and to time; in this case, the problem is DHL Global Mail's occasional inability to process a Brooklyn, New York address. In any event, having looked, not entirely thoroughly as the case may be, I can say that for the properly equipped cinephile, these packages are worth whatever shipping hassles and other temporary inconveniences that may occur in the process of acquiring them. 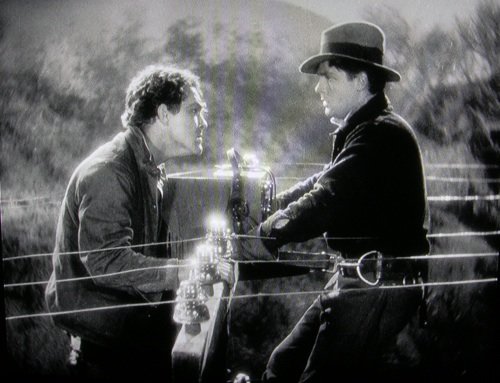 There is hardly a whole lot I can say about the films themselves in question, so I'll merely note that I'm thrilled with their high-def presentations. Street Angel starts off a little shaky, literally. The image, that is, has a little flickery quality that kind of can't be helped given the conditions of the workable materials. The film then settles into that particular otherworldly glow that marks both the Borzage and Murnau and Ford silent works for Fox; the above photograph, taken off of my monitor, is from Lucky Star, showing an early confrontation between the characters played by Charles Farrell and Guinn "Big Boy" Williams. I love the light coming off the diodes on those poles; somehow they bring to mind the Dylan line about the ghost of electricity howling in the bones of her face, and in this case, the face would be that of Lucky Star's leading lady, Janet Gaynor. That doesn't make sense, I know; but part of the magic of thsee films is in the spells they cast, and in the associations they bring up that don't make sense, except in the bizarre rag and bone shop of the individual viewer's heart.

Another extremely salient selling point for these discs are the extras. Yes, the short films in which French critic and scholar Hervé Dupont discusses Borzage and his work are in French, and without subtitles. However. Lucky Star comes with high-def versions of two very intriguing Borzage works: the partial restoration and reconstruction of his staggering 1929 silent (this one his last) The River, which I wrote about here , and Dan Sallitt wrote about for this very website here and which I've come to believe is, finally, the most genuinely erotic film ever produced in Hollywood. There's also a particularly excellent sample of Borzage's later work, an episode from a mid-50s television program called Screen Director's Playhouse, featuring a prominent filmmaker telling "A story of his own choosing..." The story in this case being "The Day I Met Caruso," a simple-as-death tale of a young Quaker girl's encounter with the opera great on a train trip. Here is Dumont on what he calls a "little gem," from his superb biography of Borzage (available in a handsome English-language edition from McFarland): "...Borzage twice captures [the lead character's] glowing features superimposed against clouds in the sky (a dreamlike shot as the clouds are not visible from the window). Once again, love is equated with music and music with heaven (Three Comrades, I've Always Loved You, etc.), a spiritual link that Borzage emphasizes by comparing the silent prayer of the 'Quaker signorina' to the tenor's performance: 'I like your way of giving thanks' (to heaven), the little girl declares to [Caruso]. Both thanks and a blessing; when the train stops due to a military convoy (it is 1917-18), Caruso sings 'Over There' for the unfortunate men departing for the front. 'We can't help but see an opposing, troubling relationship between these two trains, one transmitting the essential qualities of life, the other rolling toward death,' Pascal Pernod astutely remarked. Rather than ignore the war (like the Quakers), [the lead character] learns that we must comfort its victims, if only with the magic of music."

It is an irony out of O. Henry that one is required to shop European in order to get a proper gander at such a treasure of American culture.