It is kind of thrilling to see that the ever-exemplary U.K.-based Eureka!/Masters of Cinema label is so bullish on the Blu-ray disc format. July and August were big Blu-ray months for the label, seeing the releases in that format of two titles previously unavailable from the label: Jia Zhangke's The World and Kon Ichikawa's The Burmese Harp—and two high-definition updates of previous Eureka!/MOC releases: Shohei Imamura's Vengeance Is Mine and Rene Laloux's La planete sauvage.

All of these releases are highly noteworthy, but my selection of the Laloux film for this review is not entirely arbitrary. First off, there's the matter of the material upgrade in and of itself. The standard-def edition of La planete sauvage, a.k.a. Fantastic Planet, spine number 34 in the Eureka!/MOC series, released in 2006, was created from an interlaced master. The DVD was nonetheless very beautiful. Created at Prague's Jiří Trnka animations studios over the course of five years, the film's startling visual qualities stem less from the movement of the animation itself—which is in many sections what one would call limited, and which never even really aspires to the fluidity of Pinnochio-era Disney work that set a kind of standard for such things—than from the graphic design, by Roland Topor, which shows influences of William Blake, Gustave Doré, Odilon Redon and Max Ernst, and yet also manages to convey a hardcore science-fiction "vibe" throughout. This look is of course a crucial element in what disc co-producer Craig Keller calls the "schizophrenic cinema" of Laloux, in an essay that appears in a booklet in the original standard-def release and that of the new Blu-ray version.

In any event, time to forget that standard-def edition and its interlacing. This 1080p version comes from a 2009 restored HD master, and the improvement in detail creates, most notably to these eyes, a "whole new world" of color values, as the pastel shadings of the flora and fauna of the titular savage planet seem both more vivid and more nuanced. Every individual frame becomes a trip of its own. Making the film's allegorical reflections on freedom and knowledge and the whole notion of "civilization" rather easier to ignore, if ignoring them is your thing. 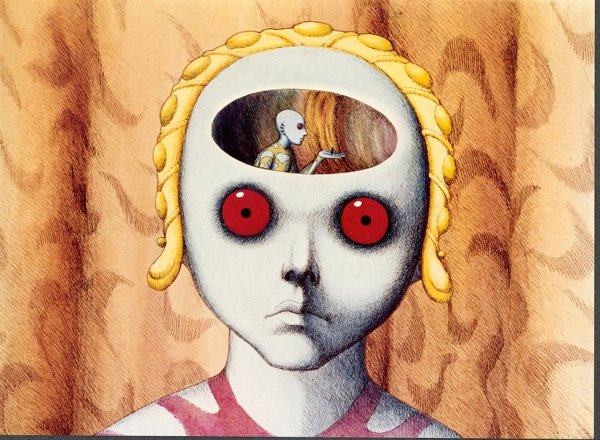 Should one choose not to ignore them, one is reminded here that the sub-genre of genuinely thoughtful cinematic science-fiction is in big trouble, and that the sub-genre of genuinely thoughtful cinematic animated science fiction is all but dead, interesting pictures such as Linklater's A Scanner Darkly constituting what I would argue to be a really rule-proving exception. This being the case, the fact that this disc also contains five, count 'em, five of Laloux's short films, dating from 1960 to 1988 is particularly significant. That not all of them can be strictly categorized as "science fiction" but that each of them contain an element of the fantastic is also important. Laloux's 1960 debut short, Les dents du singe (Monkey's Teeth) grew out of the director's work at the Borde Psychiatric Clinic; the film's "irrational" scenario and its frequently very rudimentary artwork were created by the clinic's patients. One of the credited writers on the film is Felix Guattari, the future philosophical cohort of Gilles Deleuze who was a significant worker at the clinic at the time. The source for the sort-of parable that animates, as it were, 1987's significantly more smoothed-out Comment Wang-Fo fut sauvé (How Wang-Fo Was Saved), was Marguerite Yourcenar. Aside from constituting a treasure-trove of a great and unjustly neglected director's work—by assembling these five shorts, at least one of which I have never encountered on home video in any form before, this Blu-ray collects more than half of Laloux's films as director in one package; Eureka!/Masters of Cinema also offers excellent editions of Laloux's other extant feature-length works, Gandahar and Les maîtres du temps—this disc also reminds us of the elasticity of both the science-fiction genre and the animation format. And makes one wonder why, expense aside, more filmmakers don't avail themselves of that elasticity. A question almost as worthy of consideration as those raised by the body of La planete sauvage, and by Laloux's other work.