In one of the many hilarious, provocative, and occasionally infuriating interviews that Vladimir Nabokov granted in the 1960s, he made the following pronouncement on a work of 20th century European literature that many other major intellects were/are too intimidated by to ever say a discouraging word about: "I detest Finnegans Wake in which a cancerous growth of fancy wordtissue hardly redeems the dreadful joviality of the folklore and the easy, too easy, allegory." Regardless of how one reacts to that assessment—and my own reaction is of course constrained/defined by the fact of my having only read select portions of Wake, but having enough knowledge of the work to understand that that which Nabokov speaks about is, in some form, there (that is, the word-growth, the folklore, and the allegory)—one can trust something about it, that is, one can trust that Nabokov actually went to the trouble of reading the damn thing. In its entirety. The evidence resides not just in the interviews and the pronouncements, but also in correspondence cited by Nabokov biographer Brian Boyd, who, in Vladimir Nabokov: The Russian Years, cites a letter from Nabokov to his wife Vera in which the writer expresses some misgivings concerning the Joyce work that was at the time known as Work In Progress, to wit, "in these new things of [Joyce's], the abstract puns, the verbal masquerade, the shadows of words, the diseases of words...in the end wit sinks behind reason, and, while it is setting, the sky is ravishing, but then there is night."

One would be hard pressed to not hear the voice of the disappointed...well, fan in that contemporary, private assessment, and this little snippet does stoke mighty anticipation for the selection of Vladimir-to-Vera letters that son Dimitri Nabokov is arranging for publication in 2011, doesn't it? But I'm getting away from my point. Which is that Nabokov is entitled to be taken seriously on Finnegans Wake to some extent because, judging by the available evidence, we can be reasonably sure that he read the whole damn thing. Whereas, in this delightful world of film discourse in which we live, all sorts of people feel compelled to make pronouncements concerning "late Godard" having only taken some samples of the work.

Of course this isn't entirely their fault. A good deal of "late Godard" is pretty hard to see. Beyond that, a good deal of what there is to see is available in compromised form. Recent Godard biographer Richard Brody's views on the filmmaker and his work have drawn criticism both from staunch supporters of Godard and more fashionable (in middlebrow metropolitan circles; you know, what Whitaker Chambers once referred to as "the winning side") detractors of the man and his work. But let's give Mr. Brody credit not only for having gone out and tracked down and seen all the pertinent material but for giving such detailed consideration of the more "obscure" work. Most of the keepers of the treasury of conventional wisdom, e.g., the middlebrow metropolitan crew, would have been just as happy, no, happier, had Brody delivered the dish on the ostensibly glamorous Seberg/Karina/Bardot years and relegated the likes of France tour détour deux enfants to a "whatever happened to the 'groovy' Godard?" footnote. Tell some of said detractors that one ought not dismiss the latter work without having seen more than a spotty sampling of the latter work, and odds are pretty good that one of those folks will tell you that you're...what's the phrase? oh yes: "forelock tugging." Talking cinema with folks such as these is just, well, getting to be a real fucking drag.

And another thing—whatever we would-be Godard completists or semi-completists make of the current state of Godard discourse, we still have to work on playing catch-up with the sometimes elusive Godard oeuvre. I only recently discovered one extremely helpful item, what I believe is the (so far) sole release of the offshoot of the idiosyncratic music label ECM (which released the two-CD soundtrack of Godard's Nouvelle vague a good while back), ECM Cinema—four Godard shorts, two made in collaboration with Anne-Marie Miéville, put on one Region 2 PAL DVD and packaged in a very handsome book that contains the complete verbal texts for all four films, in the original French, in English, and in German, and also an informative if ever-so-slightly fulsome ("four short films that encompass everything") essay by Michael Althen. 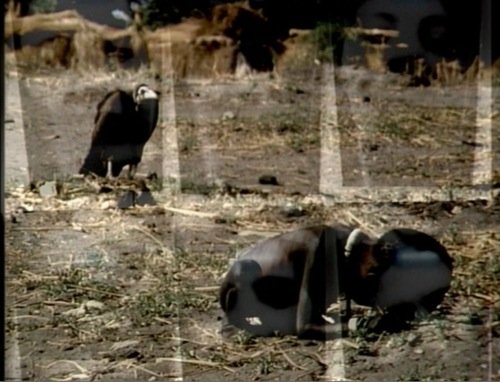 These pictures represent, mostly, commissioned work: 2000's De l'origine du XXI siécle was made for the Cannes Film Festival, 1999's The Old Place for New York's Museum of Modern Art, 2002's Liberté et Patrie for the Swiss Expo. The oldest of the films, Je vous salue, Sarajevo, was made in 1993. Sarajevo, two minutes long, is like the Gorin/Godard Letter to Jane, a "deconstruction" of a single photograph. Origine is in Histoire(s) du cinema mode. The Old Place, comprised of constantly shifting images, largely stills, over a dialogue of sorts between Miéville and Godard, is real fly-in-the-ointment of art history stuff. Not just art history—commenting on the use of the very famous photo of buzzard and child, which we see above, in the midst of a dissolve, Godard remarks (in French), "...we paid the Sygma Agency 2,856 francs, plus 5.50 in taxes for the right to show this photo." "No, for the duty," Miéville corrects. "Yes," Godard shoots back, "but at the morgue in Blida, after the Sidi Sehrane massacres, no one dared speak of art." And hey, if you don't know from the "Sidi Sehrane massacres" (full disclosure: I sure don't) there's no point in tugging your forelock about it, right? 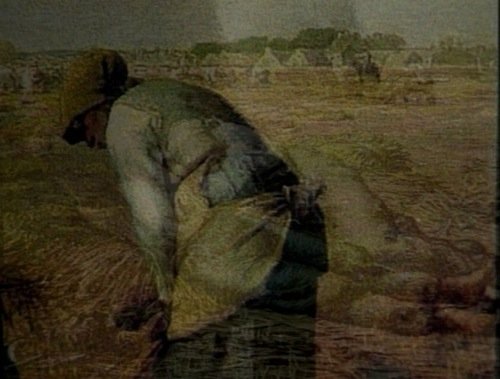 Later, somewhat more amusingly, Godard observes—possibly, probably, quoting another source, really, the guy had David Shields and his whole Reality Fiction schtick beat by at least two decades, probably four—"When Jean-François Millet paints two peasants praying in a field, and calls it 'The Angelus,' the title matches the reality." Miéville continues: "When Francis Picabia draws a bolt and calls it 'Portrait of an American girl in the Nude' the title no longer matches the reality." Right now one can hear certain anti-completists sighing, "Indeed, so far, so Histoires, so why bother" or something; hence, it's worth noting that... 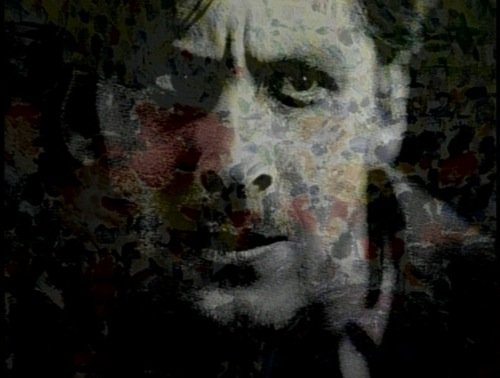 ...Liberté et Patrie, a pertinent dissolve from which is seen above, is formally quite similar to The Old Place, its overriding tone is more strangely whimsical than any other of Godard's essay films, which perhaps derives from its odd multitude of sources, including an early 20th-century Swiss novel about a painter...which is here adapted, as Brody has noted, into a kind of mini-Godard-autobiography. It is the most overtly Queneau-esque of Godard or Godard/Miéville works, and its particular flavor is all the more interesting and peculiar in that its method seems entirely formally consonant with that of the other, more ostensibly "serious" works contained herein.

This spectacularly well-put-together package makes one regret that ECM has not further pursued the admittedly possibly quixotic notion of making its "Cinema" division a going concern. In any event, I found this well worth seeking out and paying through the nose for.

Finally, below, two images, the first from Je vous salue, Sarajevo, and the second from De l'origine du XXI siécle. 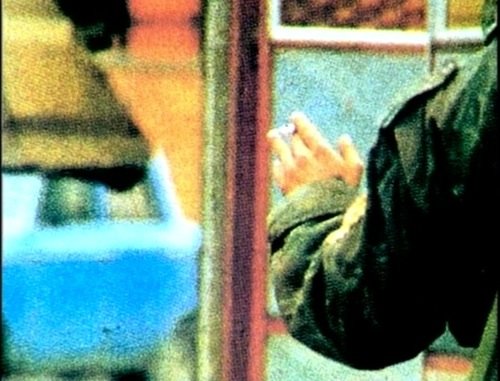 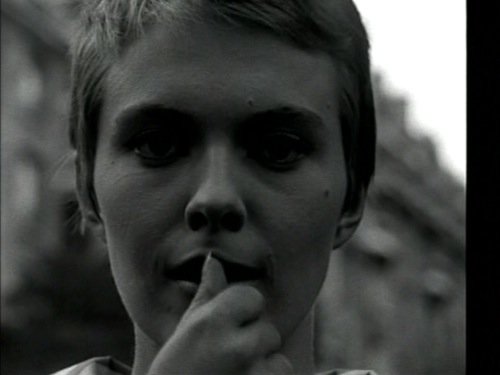