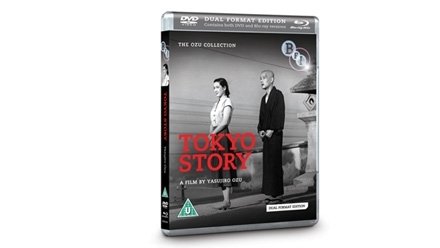 These questions dog me as I consider three Blu-ray discs from the British Film Institute, high-resolution home versions of three—no, wait, make that four— Ozu masterpieces. If I focus here on Tokyo Story, it's because it's the one best known to whatever larger audience there is or may be for Ozu pictures, and also because it's the one that's most likely to be a budding cinephile or film student's first exposure to Ozu. The other three Ozu pictures put out not merely in Blu-ray but in dual-format—that is, Blu-ray and standard definition DVD—editions are 1951's Early Summer, and a dual-format double-feature of 1949's Late Spring and 1936's The Only Son. These titles are part of a larger dual-format push from the home video division of the Institute, which is selling these discs at a lower-than-normal price (or "price point," as Americans in marketing like to say, for reasons I never understood). The point, I suppose, being to push the Blu-ray format itself, and push the Blu-ray for cinephiles concept, while also being backward-compatibility friendly. And so we shrug our shoulders and sigh, "Ah, marketing." But marketing is what drives the technology, and vice versa. And what also drives our expectations about the technology. This is part of my point.

High-definition television and its attendant software complements were marketed to the public—we could say "pushed" on the public—as transformative technologies/experiences. As with a large-format film technology such as IMAX, high-def for the home was going to CHANGE THE WAY YOU WATCHED TELEVISION. Hence, a severe emphasis on the more sensational-looking results of high-def remastering of cinema for the home, and for the wonkier of the consumers, a throwing around of numbers—4K, why to hell with that, what about 8K scanning, which will compel you to go out and buy a disc of a film you'd ordinarily not even want to see except that it's the first to be scanned in that humongous amount of detail, etc. Cinephiles being supposedly attuned to the minutiae of technical presentation—hey, what's the ideal throw for that projection lamp, anyway?—a fascination with remastering was assumed, and new tools led to new wonders and new complaints. How much digital noise reduction is too much? What's with that grain?

Some of the readers here will be irritated at my even bringing this person up, but Jeffrey Wells of the website Hollywood Elsewhere is kind of the king of Blu-ray savvy (or so he thinks) cinephiles (what are you gonna do) who seem to demand that each Blu-ray experience be a transformative one, and if it can't be, it's not worth having. So bear with me for quoting him just a little. "Why doesn't DVD Beaver's Gary W. Tooze let his hair down and just say it?" Wells grousedrecently of a new Criterion Blu-ray of Breathless that he of course hadn't yet seen.  "A Bluray of Jean-Luc Godard's Breathless (1960), which was shot on the cheap using natural light for the most part, can't look that crisp or shimmering." One needn't go into the farrago of errors and unearned assumptions contained in the seemingly not-too-detailed clauses cited here, but merely note the attitude, which is that if something cannot shimmer on Blu-ray, it's just not worth having on Blu-ray. As if added detail in and of itself is of no consequence. Because, let us understand, that's all, really, that a Blu-ray disc is going to offer at the base line: a progressive—that is, non-interlaced—picture with detail of 1080 lines of vertical resolution. That's all. More detail. Shimmer optional. (And pancake makeup optional too: a recent Wells post on the Blu-ray disc of Psycho suggested that the fact that this version allowed you to see the cosmetics on actor Martin Balsam's face was a good thing.)

And of course how that detail looks is going to be reliant on both the source material itself and the condition it was in when it was brought to the telecine process. Which sometimes is not a telecine process as we used to understand it but a process of individual frame scans, which takes longer and is more costly and is (although this is hardly an actual rule) largely reserved for rescuing films that have undergone a fair amount of damage that can be repaired in the digital domain only once each individual frame has been scanned. 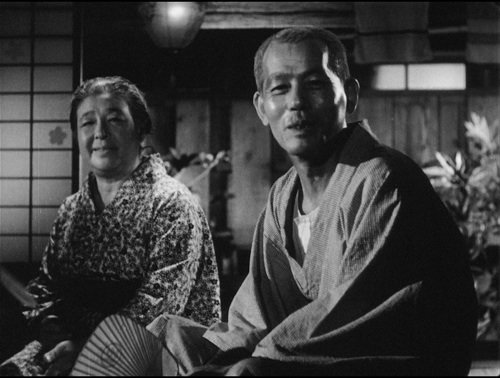 This all brings us to the Blu-ray of Tokyo Story. As I saw in my viewing of it, and as is amplified in some detail in the DVD Beaver review of it (not to mention its accompanying screen captures, one of which I reproduce above), it doesn't shimmer. It's not meant to. Ozu's style of filmmaking abjures the showy. This is not to say that his films are visually ugly, or even plain. They are beautiful. In a very unadorned way, a way that is both ostensibly true to the reality depicted and thoroughly composed. To say that Ozu's films are free of artifice is to miss, among other things, the particular way in which his visual storytelling style frequently goes against what's referred to as the 180º rule, and the attendant continuity "errors" that on occasion accompany those, and which are entirely arguably deliberate. But anyway: no, no shimmer, no glitter, no Technicolor razzle-dazzle. And in fact nothing too unfamiliar in terms of sources: as the notes on the transfer in each of the packages tell us, the masters for these films belong to the U.S.'s Criterion Collection, which is in the habit of creating high-definition masters for all its titles even if the company is only going to manufacture and market that material in standard def.

The other end of the spectrum in terms of cinephile expectation for Blu-ray discs or any home video manifestation was articulated by The New Yorker's Richard Brody, in a comment he left on a blog post by yours truly: "The most important thing about a DVD is its availability; even at its best, it's a faute de mieuxsimulacrum of the movie-going experience, and to obsess about the quality of a transfer without discussing the film that's being transferred--what its significance is, or why readers should even bother caring that it's available on DVD--is a kind of technical fetishism that's skew to movie-love. (So many of us have seen so many movies we love on TV, cut by commercials, in the wrong aspect ratio, or on low-fi 16mm. prints, or in theatres that did dreamlike-bleary rear-screen projection, and, though it matters, it doesn't matter as much as does the film itself.)" Some might argue this takes matters entirely too far. But in a sense, it helps me underscore for myself just what this BFI Blu-ray of Tokyo Story is good for: it is, in picture and sound, the best possible available home video presentation of a beautiful and nourishing film. Which is nothing to sneeze at.