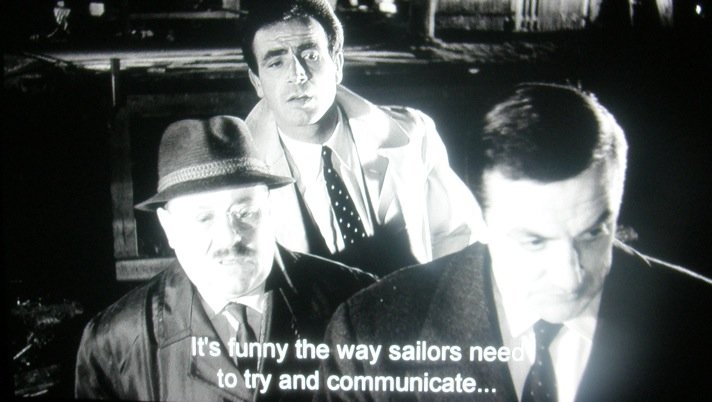 Classic actors don't always act in classic films. That's a relatively unarguable cinematic truism. We all know that, indeed, they sometimes act, quite frequently, in pretty terrible films. One need not enumerate the various slabs of celluloid tripe that the likes of Al Pacino and Robert DeNiro have elected to contribute their talents to in recent years, although one might feel compelled to note that, You Don't Know Jack notwithstanding, Pacino in particular has been on such a run of dreck that one may wonder if it's threatening his very status as a classic actor. But we are not here to discuss or debate DeNiro or Pacino per se, so we'll let those fellows drop, except to say that, as they are American actors, the U.S.-residing readers of this site are privy to their every bad career choice or performance in a way that he or she isn't privy to all the not-very-good things that Gerard Depardieu gets up to. Oh, it's not as if we don't see plenty of that, going back now a pretty long way—need we bring up Bogus or My Father The Hero?—but on the other hand, an American viewer has to search pretty hard to get a gander at one of those insane Asterix and Obelisk movies.

In any event, sometimes classic actors fall into mediocre films by accident, or just by not really feeling quite as inspired to do the real work any more. And sometimes being part of the ordinary is just a part of one's career. While no one would mistake Italian-born Lino Ventura (seen above, right) for a master of the thespic/chameleonic arts in the way that DeNiro was at his height, there's no denying that Ventura, like Bogart, was a classic actor—a real type. The fact that the films of his we're seeing popping up in the revival houses and DVD shelves of the U.S.—stuff such as Melville's Army of Shadows and The Second Breath, and Claude Sautet's tight-as-a-drum thriller Classe tous risques—doesn't mean that we're prone to overrate him. But it's instructive sometimes to watch him in a film more ordinary, if only to see just how real a piece of the real deal this tough-and-tender character lead was.

Georges Lautner's Les tontons flingueurs from 1963 is just such a film. This crime comedy is by no means bad. But on not-even-all-that-close examination, it's a bit flimsy and unfocused. It proceeds from a setup crime comedy fans will not find unfamiliar. Ventura plays Fernand, a one-time gangster who's gone straight—of course—and now runs a tractor company in a rustic French province. But he's summoned to Paris by an old colleague in crime, a once-exiled boss called "The Mexican" (guess where he spent most of his exile?) who's about to kick, and wants his buddy to tidy up his business affairs to better benefit his teen daughter. The Mexican wants Fernand to take some interest in her affairs as well, making sure she enrolls in school and doesn't get too mixed up with boys. Reluctantly agreeing to the favor as The Mexican draws his last breath, Fernand is immediately beset by debtors of the former boss who make it clear they don't respect Fernand's authority. This bunch is led by a character played by the drolly dyspeptic Bernard Blier, father of director Bertrand. At Fernand's home the problems increase: there's a shifty lawyer, a bizarre manservant prone to inappropriate anglicisms, and the teen girl, who believes Fernand to be a long-lost uncle (the film's title translates as "Uncles With Weapons" or "Armed Uncles" or "Dangerous Uncles" or what you will) is being romanced by a snooty, sensitive type Fernand can't wait to be rid of. 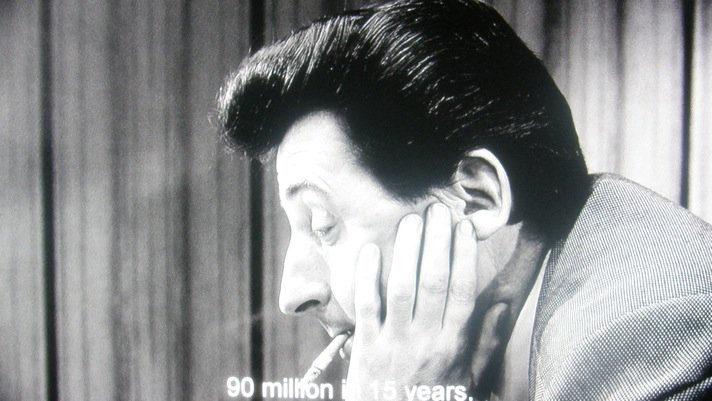 I know—the setup sound pretty entertaining, and while there's little that seems overtly wrong with the film, I found it lacking in a certain oomph. The cover image of Ventura and Blier raising their eyebrows at each other suggests a far funnier, more deadpan film than what I got. But what do I know—as it happens Tontons was a great commercial success on release, and made Lautner famous in his own land, if not abroad. 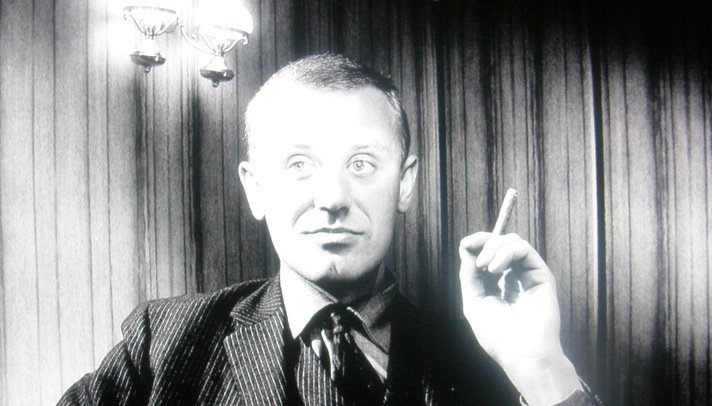 This fame and esteem no doubt in no small part accounts for this film's existence in a very snazzy French Blu-ray disc package from Gaumont, which boasts a razor-sharp rendering of the film's 1.66 black-and-white image. These illustrations are photographs taken off of my plasma screen, which is just gonna be the way it goes until Apple decides to support the Blu-ray format, and I apologize for their over-brightness, but I think you get a good idea of the detail from the shots here, particularly the second one in this group, of smoking Jean Lefebvre in profile—look at the hair, at the pattern of the houndstooth jacket. Note the lack of moiré-pattern distortion. This really is a beautiful disc. 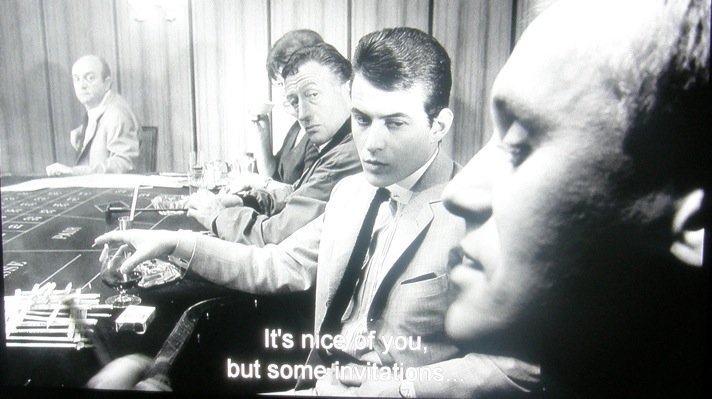 And it's also region-free, and as is evident, the main feature has English subtitles. The copious supplements—three video docs on various aspects of the film's making and makers—seem not to, and such is life, and such is an opportunity to improve your language skills. For all that, this is a specialty item: for hardcore Francophiles, hardcore Ventura fans, or just non-French cinephiles interested in exploring a less-internationally-celebrated corner of a national cinema.