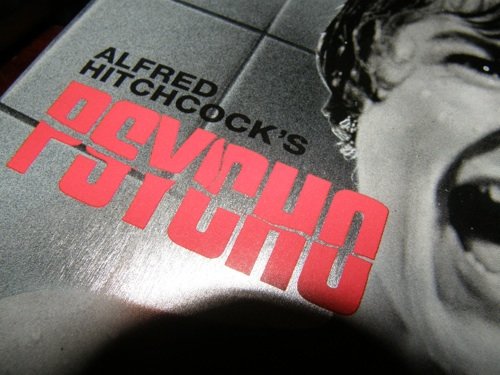 I cannot remember a time in my life during which I did not believe that Alfred Hitchcock's Psycho was in some fundamental way a perfect fim.

According to family legend, I practically was. Psycho opened in June of 1960, and apparently was in drive-ins shortly after that, for it was at a drive-in that my young parents first saw it, with my nearly one-year-old self seated in the front seat between them, and my mother pregnant with my sister, who would be born in August. I was apparently awake and rapt, and the fact that the film scared the bejeezus out of my mother was frequently cited by way of humorously explaining my younger sister's various eccentricities in the years to come. (My sister is a sweetheart, and a wonderful mother of three of whom I'm extremely proud, but I daresay she will readily admit to having had something of a befuddlingly outsize personality for many of her formative years.)

Of course I don't remember any of this—I wasn't even one year old, for heaven's sake, and I'm not Vladimir Nabokov! The first film I do remember seeing was another Hitchcock, North by Northwest, also at a drive-in, during its early-60s theatrical re-release. The image of drunk-against-his-will Cary Grant sitting all the way back in the Mercedes driver's seat as he attempts to navigate a cliffside Long Island road is the first such thing to etch itself upon my mind, that I know of. And the fact that in my conscious experience Psycho was the film that was always there accounts for how large it looms in my life...at least in part it does.

The other thing, of course, is that it's Psycho. And I do love its every frame, and every new development in filmmaking, both technological and aesthetic, seems to me to be related to it somehow. Whenever I watch the post-credit opening shots, with the titles of the precise time and place, and see the cuts and dissolves and realize that what Hitchcock really wanted was an unbroken track from out of the sky and right into that hotel window, I know that Hitchcock is the director who really could have made something out of CGI.

And in my days of growing up, my early early days as a conscious cinephile, the days before VCRs and DVRs, the thing was to see Psycho as often as you could, to watch it whenever it was on televison—WWOR Channel Nine was the channel that owned it, and they showed it fairly often. Mostly late in the evening. I was not a particularly socially adept child, and I was not often invited to kid's parties, so when I was it was a real event for me. But there were other things that took precedence. Sitting on the bench of the softball field at gym class in 8th grade, my buddy Joe asked what I was doing that Friday night. "Well," I said, "I'm going to a party at so-and-so's house!"

"Yeah! But I gotta get home before 11, because Psycho's gonna be on!"

Our gym teacher, overhearing us at the sidelines, chimed in humorously. "What's it, an all-boy party, Kenny?"

Jim Merlo. He had been on the '62 Mets' farm team, as I recall. And bragged about it.

When I wanted to watch television late, I had to lug my parent's 12-inch black-and-white Sony up to my room and watch with the sound really soft so as not to awake my younger brother, with whom I shared a room. It was in this fashion that I first saw Godard's Alphaville, in a dubbed and truncated version (which nnetheless did include those frames late in the film that go to negative) that ran on WABC Channel Seven every now and again. You did what you had to do back in the day, kids. 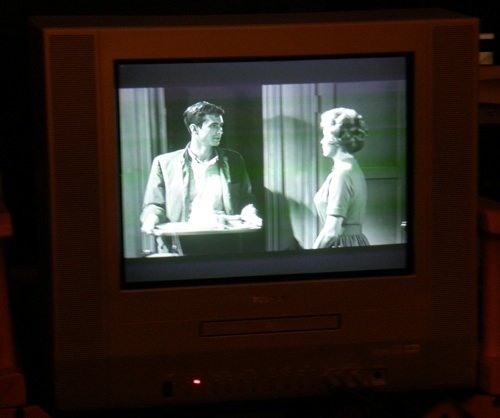 In a mild irony, at the moment I can only watch the new U.K. Universal 50th Anniversary Special Edition Region-free Blu-ray of Psycho, which was released on August 9th—the American edition, which all assume will be an exact replica of this one, comes out in October—on a 13-inch CRT set, a Toshiba I gifted my then-girlfriend, now-wife with several years ago when we were living apart and which now is a backup set for our still-out-of-commision 50-inch plasma display. I keep telling the very nice Hitachi customer service people that the failure to get my set fixed in a timely fashion is inhibiting my practice of my profession, and they don't seem to care enough to...I dunno. In my conversations with them I'm reduced to saying things like, "I really don't want to write an article called 'My Plasma Repair Nightmare' but..." and even then nothing happens. Mainly, I'm upset because I'd really like to watch this new version of Psycho properly. From what I can tell it's pretty damn sweet. And yet...you think I really need to see this film again, as it is part of my DNA anyway?

Now if you'll excuse me, I am dying of thirst-a-roooney...