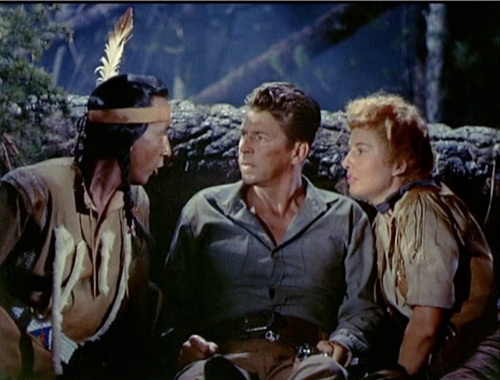 The films of director Allan Dwan—whose career was one of the longest and most fruitful in Hollywood history, ranging from 1911 to 1961—have multiple virtues to recommend them. But the one I tend to value most is Dwan's unhurried, confident storytelling style. It's exemplified, to a fair extent, in a pair of shots from 1954's Silver Lode, arguably the best of several Westerns Dwan made in the mid-'50s for RKO and producer Benedict Bogeaus. They occur in the opening sequence. It's a bright sunny day in the film's eponymous town, and some kids are playing. Benignly—these aren't the deprived/depraved ragamuffins of The Wages of Fear, they're good American kids, damnit! But the sound of approaching horses makes them look up, and move back in fear. Whoever's approaching isn't going to ride around them. 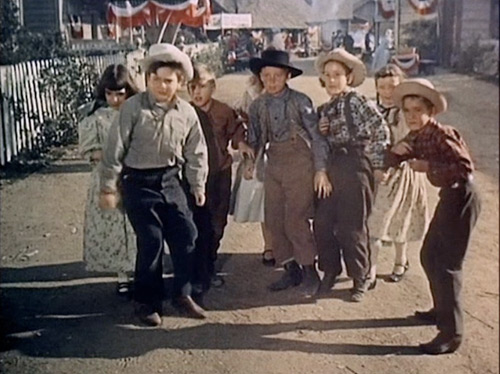 Pretty much any other director would cut to a direct reverse shot, probably from a low angle, and show bad guy Ned McCarthy (Dan Duryea) and his posse almost bearing down on those kids. Dwan doesn't see the need to do so. He cuts to shot taken (by ace cinematographer John Alton), yes, from a low angle, but also from a sidelong position, tilting up from the horses' clomping hoofs to the serious, but not imminently threatening, faces of McCarthy and his gang. These guys will have plenty of opportunities to wax badass as the tight (a mere 80 minutes) picture goes on. Dwan always engages—his movies move with utterly compelling fluidity—but never oversells. His signature is making the storytelling look easy. 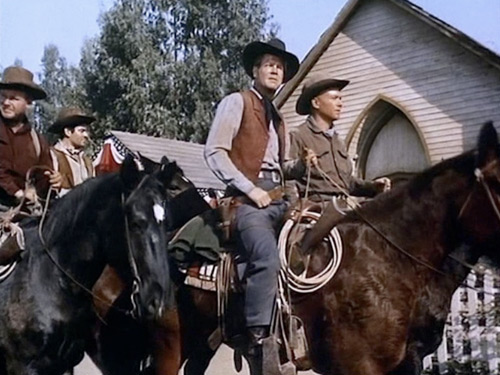 The three most significant, and good, films, Lode, Partner, and Scarlet, get their own discs, while the other four are doled out on two double-feature discs. Each of the titles is at least somewhat visually upgraded from the domestic VCI versions. Below are two screencaps from Slightly Scarlet, a brisk bad-girl crime thriller shot by Alton. Some admirers call it a color noir, but its disposition is too perversely cheerful to really qualify it as such a thing, at least as far as I'm concerned. What Scarlet is is tough fun that doesn't take itself or its Jim Thompson James M. Cain (sorry!) source material too seriously, in part at least because it couldn't; the Production Code wouldn't allow a faithful rendition of the sleazy story. So Dwan and company—a cast led by stalwart John Payne and bombshells Arlene Dahl and Rhonda Fleming—just seemed to enjoy the work. In any case, the top screen cap is from the VCI, the bottom from the Carlotta. 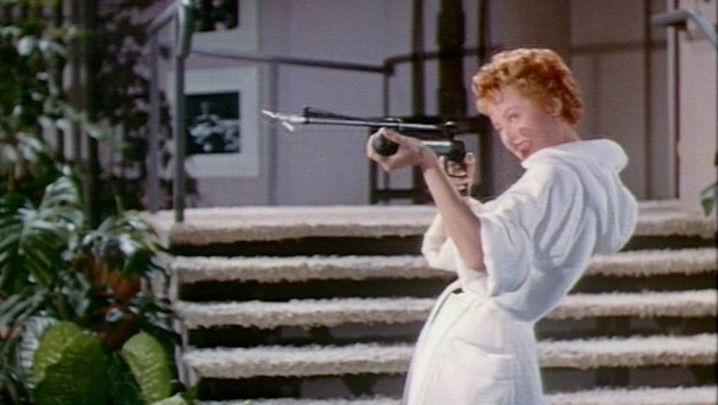 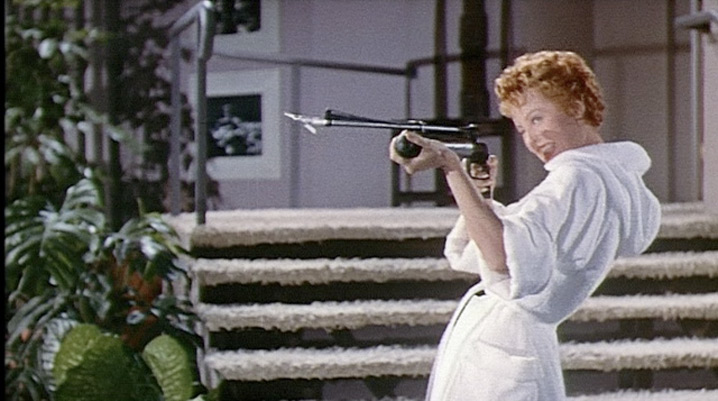 Neither, in this day of high-def restoration and transfer, is anything to really write home about, but it's clear that the Carlotta has an edge in color and detail. The Carlotta discs pay more attention to aspect ratio as well.  Five of the seven pictures in this set were made in "SuperScope," a process approved by then-RKO-head Howard Hughes, who wasn't going to be using Cinemascope or any other goddamn widescreen process that he didn't own. Hughes hired brothers Irving and Joseph S. Tushinsky to concoct a process. It is possibly one of the most ass-backward you will ever encounter. (My information derives from Robert E. Carr and R.M. Hayes' invaluable book, Wide Screen Movies.) In SuperScope, the film is shot using standard 35mm cameras, lenses, film. Filmmakers were instructed that all action be framed "into a 2:1 aspect ratio with equal cropping from the top and bottom of the frame." "The film was then cropped to 2:1; a 2:1 anamorphic squeeze was added, and the film was printed by Technicolor in 'scope format with .715' height and .715' width. A narrow black strip appeared on the right side of release print frames to fill in the difference in the .715' SuperScope width and the .839' width of CinemaScope." 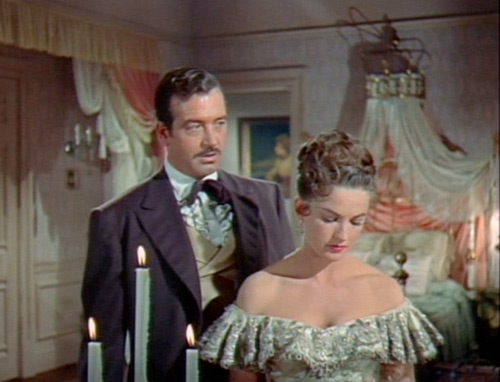 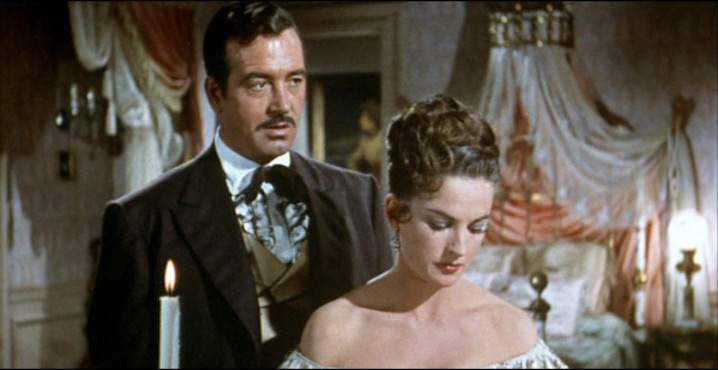 The VCI edition of the great Tennessee's Partner presents the film in standard Academy ratio, while the Carlotta edition serves up the SuperScope 2:1 ratio. That's also the case with Slightly Scarlet. Masters that Dwan and Alton were, their compositions tend to work just fine in either framing, but the wider dimensions do come closer to replicating the films as they were seen in theaters. On some of the other films, Carlotta handles things differently' the SuperScope Escape From Burma, for instance, is presented in a 1.78:1 version.

The Carlotta set also beats VCI in terms of extras. Each disc contains audio supplements provided by Peter Bogdanovich, from tapes of his late '60s interviews with Dwan that made up a large portion of Bogdanovich's long-out-of-print 1971 study Allan Dwan: The Last Pioneer. These don't merely recycle material that ended up in the book; there's stuff about Escape From Burma, for instance, that didn't make it in. And Dwan, sounding great at nearly 85 years of age, is a delight to listen to. The audio supplements are wittily introduced via a Slightly Scarlet scene wherein John Payne presents Rhonda Fleming with the fruits of a surreptitious bugging exercise. There are also a few mini-docs featuring interviews with screenwriter Robert Blees and actors Harry Carey, Jr. and Stuart Whitman, and two short films Dwan directed for television in 1956.

Dwan has been a special case in auteur studies since Andrew Sarris pronounced him as possibly "the last of the old masters" in The American Cinema; Bogdanovich's study followed shortly after. His is a career of ups and downs happening in rapid succession. For instance, his 1939 sendup of The Three Musketeers is a grand bit of fun, and probably the most watchable of Ritz Brothers films (pace, Pauline Kael, a Ritz fan); it's followed by the risible in a different way The Gorilla, a film whose reputation is such that it's thrown in the face of Dwan champions, and by extension, auteurists in general. (I could argue that The Gorilla isn't really that bad...and I may, in another post.) Kent Jones has written quite eloquently of Dwan's '40s comedies for Republic. This box captures a particular point in his career, making low-budget B pictures that were, as he saw pretty much all of his pictures, entertainments. And these are entertaining pictures. Despite its often-mocked title and leading man—one Ronald Reagan—Cattle Queen of Montana is a solid outing without any suggestion of camp. (Reagan himself actually fares better as Payne's sidekick in Tennessee's Partner, proving the wisdom of Jack Warner's line "Ronald Reagan for best friend.") Such particular entertainment value is not to be sneezed at.