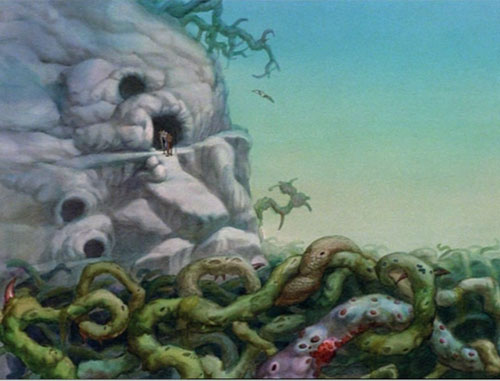 One of the many admirable characteristics of the Eureka!/Masters of Cinema label is its disinclination to do things by half measures. An ordinary label overseen by less passionate, more cost-conscious cinephile business-people might set its sights on René Laloux's 1973 animated feature La planète sauvage, a Cannes Grand Prix winner and international cult hit (it did healthy business on the American midnight movie circuit under the title Fantastic Planet), and then, taking note of the relative obscurity of the rest of the filmmaker's body of work, deign to leave well enough alone. But not Eureka!/MOC. A year after its dazzling presentation of Planet, supplemented by (among other things) two of Laloux's short films, one early, one late, and the label released Laloux's two other animated features, 1982's Les maîtres du temps (Time Masters), a collaboration with famed comics artist and animation designer Moebius, and his final work, 1988's Gandahar. Up until that point, Gandahar's reputation in the English-speaking world was that of a ruin. Shortly after it screened in Cannes in 1988, the film was purchased by Harvey Weinstein, who applied his scissor hands to the dizzyingly complex story (and got Isaac Asimov to take a story adaptation credit), got the likes of Glenn Close to work on the English dubbing, named himself director, and released the resultant I-guess-you'd-call-it-a-loss-leader as Light Years. 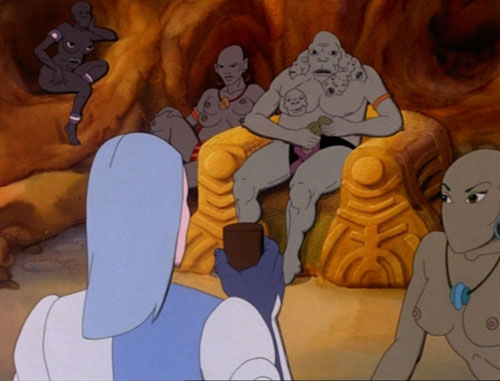 The actual storyline of Gandahar, concocted by Jean-Pierre Andrevon in a novel adapted by Laloux, is a very dense and daunting stew of science-fiction (and I do mean science-fiction, and not that prevaricating, respectability-seeking thing called "speculative fiction") tropes and ideas—there's the notion of time folding in on itself, there are complexities of physics, ruminations of genetic mutation, and more. The edenic title setting plays like something out of ancient myth, featuring empresses with winged heads and so-called "mirror birds" that maintain the safety of the realm. Once the metallic army threatens the paradise, the picture takes on a more, shall we say, earthly feel, and we follow designated hero Sylvain as his discoveries about both the past and the future of his homeland and build to a we-have-met-the-enemy-and-he-is-us (sort of) climax. 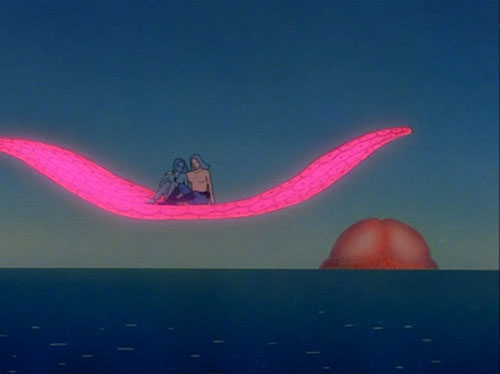 This gets kind of hard to follow, frankly—I've watched the film twice and it still offers up many moments of "huh?" when recollected in tranquility—but in a sense it doesn't matter because, despite the occasional skimpiness of the animation and the character depiction (the film was realized in North Korea, by a large team of animators and artists who lacked the baroque sensibilities that Fantastic Planet's Czech technicians brought to the table), the picture's imagery is a constant trip, as in the above screen cap, wherein Sylvain and blue female consort Airielle take to the sky on what looks like a streamlined hot-pink manta ray, or something even weirder. Note also that they seem to be flying from the head of a gigantic penis that's bobbing, as it were, in the sea. Well okay, then. 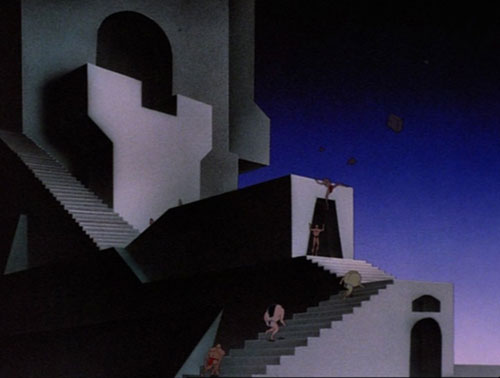 Dig, if you will, also, the Saturday-morning-cartoon-meets-M.C.-Escher stylings of this castle where a climactic battle occurs. No "reality" per se, just imagination, visual wit, and such. Not an environment to "believe" in, but to delight, to revel in. The way that such fanciful constructs effect the viewer's experience of the film's diegetic content is one of the many topics Craig Keller considers in his lengthy essays that accompany each of the Eureka!/MOC Laloux releases. Always an impassioned critic, and a particularly impassioned one when he's angry, Keller takes no rhetorical prisoners when recounting the Weinstein mutiny of Gandahar. Nor is he shy about tying Laloux's works and ideas to other currents in French film and thought. Taken as a whole, Keller's work on the booklets for the three Laloux releases constitute something like an exemplary critical biography of the filmmaker. As with its ongoing releases of the films of Maurice Pialat (the most recent of which I'll be writing about for The Notebook shortly), the Masters of Cinema series' work with Laloux constitutes a major art reclamation project.