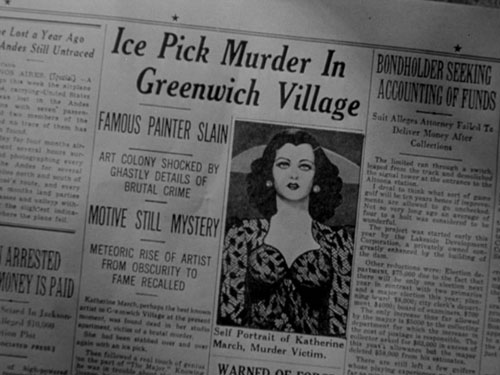 What is it about the very scrupulous DVD collector, or, maybe what we might call the very scrupulous DVD librarian? What is it that drives him or her—but let's face it, more often than not it's a him—to pursue various iterations of a particular title in an obsessive fashion, so as to finally arrive at the closest thing at that moment to a platonic ideal of pictorial perfection? This week, we look at two versions of Fritz Lang's 1945 thriller Scarlet Street and try to arrive at an answer.

From a superficial level, Scarlet Street, written by Dudley Nichols from the novel and play La chienne, by Georges de La Fouchardiere and André Mouézy Éon—adapted by Jean Renoir in 1931—is the most "Germanic" or "Expressionistic" of Lang's American films, an exemplary film noir of irrational love, gut-churning betrayal, horrific revenge, and ironic misery. Housebound, henpecked quasi-surrealist painter Christopher Cross (really!), an exemplary portrayal of a thoroughly beaten man courtesy of former crime kingpin Edward G. Robinson, lives a life of quiet desperation until he happens into the web of opportunistic...well, without Joseph Breen butting in we would know that she was a prostitute, but we know anyway...Katherine March (a very beguiling Joan Bennett), who persuades the sap Cross to let her pass off his paintings as her own. Between that and the funds Cross embezzles from his staid business firm we know it's not going to end well, and as it happens, it ends both worse and better than we might have anticipated, thanks in part to a too-confident pimp played with maximum oiliness by Dan Duryea.

Despite the fact that it's kind of a remake of Renoir's La chienne, Scarlet Street is the most powerful of Lang's 40s thrillers, in part because it is so devastatingly located in the here-and-now of its making (unlike 1950's The House By The River, it's set in contemporary times), in part because it is so thoroughly grounded in male insecurity (unlike the fairy-tale structure of 1948's Secret Beyond The Door) and largely because it takes its extremes to the very end of the line rather than pull back and reveal that it was only a dream (as in 1944's The Woman In The Window).

Yes, Scarlet Street is the most powerful because it is the most merciless. Even watching it today, when almost every kind of cruelty between men and women has passed before our cinematic eyes, it's still bracing to watch the gorgeous Bennett dismiss the milquetoast Robinson, especially as it's made clear that he hasn't even come as close to touching her as we, the viewer, have just by looking at the below shot, or rather, shots.

And here is where we detach from the emotional, visceral and sexual pain to address the actual subject of this report. For so many years this entirely remarkable film was not at all easily accessible, and when it was accessible, it was in a mediocre form. So huzzahs were heard in 2005 when U.S. label Kino presented a DVD—"in cooperation with the Library of Congress," fancy that—featuring a "high-definition transfer from the  35mm negative." And indeed, it looked better than any version of Scarlet Street that most people had seen. And that should have been that.

But the disc wasn't perfect. It seemed to be an interlaced, rather than a progressive transfer, and as such there were combing artifacts and so on. Nevertheless. It looked good, and was the best we had going.

The intrepid digital detectives at DVD Beaver, however, had their eyes open. In late 2008 it was called to the site's attention that the British label Odeon had issued a version of Street that, while lacking the extras of the prior edition (including an excellent commentary from David Kalat), was sharper and clearer than the Kino version. This notice attracted the attention of picture-quality obsessives everywhere, your humble correspondent included.

And it was correct. Albeit very...subtly. The frame grab below is from the Kino disc. Note Joan Bennett's face. The speck of dirt on her cheek, on the left side of the frame (it's her right cheek, of course). The general softness. 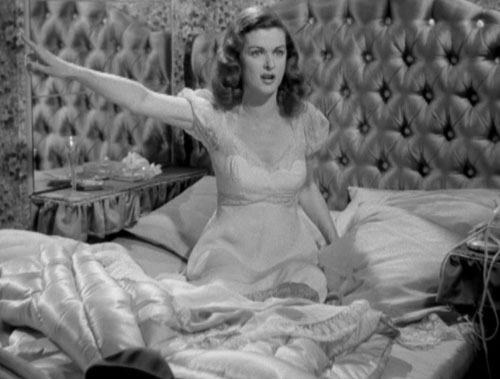 Work with me here. It's not going to be easy. But trust me. The devil, as always, or God, depending on the extent to which you rely on Goethe (is that the guy who noted this?) is in the details. Below is a screen grab from the Odeon disc. Dirt on cheek gone. Overall sharpness improved, without a fallback on "enhanced" brightness, which is often a giveaway for unnecessary digital noise reduction anyway. 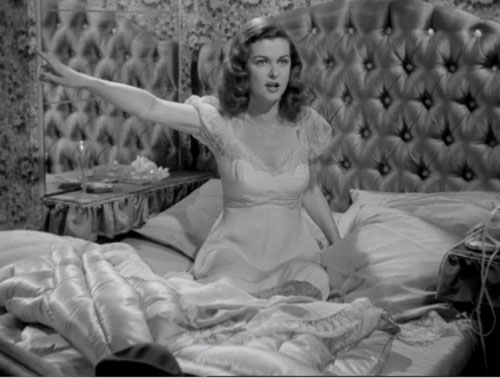 The next set of comparisons may actually be more convincing. Again, the first screen cap is from the Kino disc. I ask you to pay particular attention to the hat Edward G. Robinson holds in his left hand as he extends both hands in anticipation of being arrested. Look at the brim of the hat, extending from his hand into the left-center portion of the frame. It looks choppy, almost as if it was made from corduroy or something. That's an artifact from an interlaced transfer. 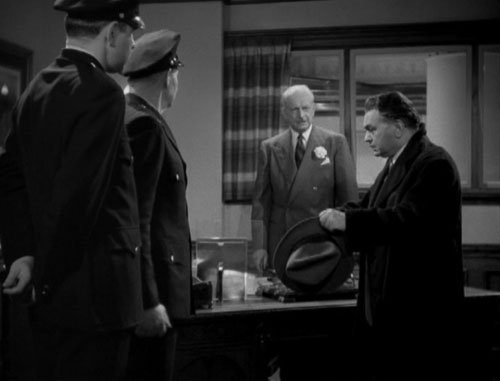 Now see the same shot, below, resolved in the British Odeon disc. The brim is smooth, uncompromised. Do such details make a profound difference in the appreciation of such a film? Good question. Hunting down this movie as a boy, watching it on a small TV in a truncated, commercial-interrupted version in the 1960s, it still had a pretty heavy effect on me. Great films can always reach out from the paucity of means with which they are shown in order to twist us up. But maybe the films that twist us up, or somehow move us, the most, are the ones whose ideal forms we're most invested in pursuing, as in a process of distillation. 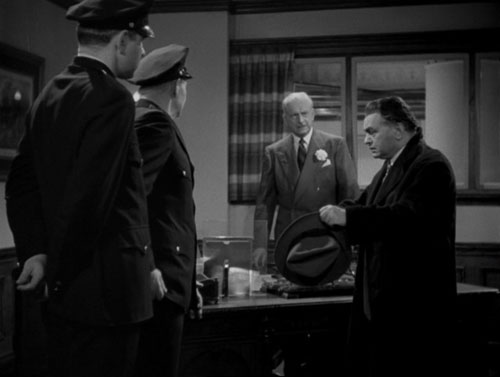