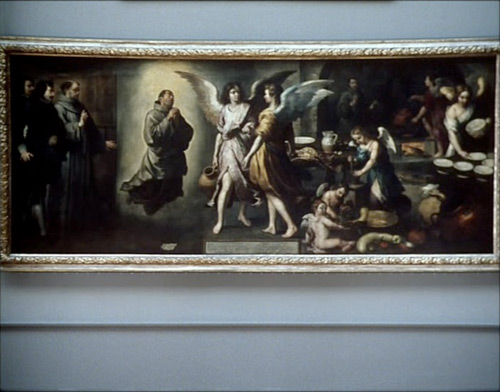 When considering the paucity of works by the filmmaking team of Danièle Huillet and Jean-Marie Straub available in the DVD format, it behooves one to also consider the question of whether their works ought to be viewed (and audited) on a television or video-grounded home theater in the first place. A conversation on this very topic, which I suppose ought to have started here, began on my own blog a couple of days ago. I put up a post in which I passed along what I believed to be a funny bit of banter between myself and my wife, which banter occurred while I was watching the New Wave Films Region 2 UK double-DVD set of three films by the collaborators Danièle Huillet and Jean-Marie Straub: their debut "feature," and probably best-known film, 1968's Chronicle of Anna Magdalena Bach; 1998's Sicilia! a picture with some extra cinephilic interest, as its editing is chronicled in Pedro Costa's film Where Does Your Hidden Smile Lie?; and the second version of 2004's A Visit to the Louvre. The post caused some to question My Lovely Wife's commitment to Serious Cinema, which I assure all of you is rock solid; the quoted dialogue is just an example of the kind of shit she likes to give me when she's feeling especially puckish, and which unfailingly cracks me up. Other reactions did underscore the strangeness of the scene I partially depicted. That is, what was I doing in my living room on a beautiful Saturday afternoon while my wife was puttering about with various chores, watching a bunch of Straub/Huillet films? As one commenter averred, it wasn't just the medium, but the whole environment that lacked: "There's something about the concentrated, focused viewing experience that a theater space brings to the mix that seems invaluable for these sorts of films. There [are] often very subtle, slow rhythms built up by the filmmakers that in a home viewing context are lost by surrounding distractions, or by the fact that one can pause the film and get up, grab a drink, go to the bathroom, etc. which effectively wrecks the flow of the film. Maybe this is just my distractability speaking, and maybe you guys have better self discipline than I do when watching a movie at home. But it certainly helps to have the viewing experience out of my control and distraction free in order to give myself fully to the viewing." While I'm perfectly capable of exercising necessary self-discipline when watching at home, in this particular case I wasn't really doing so. I was giving these pictures a second (or in the case of Bach, a third) look for the purpose of writing a piece about their DVD versions. That is, in order to assess certain commodities. So the questions this commenter brings up weren't fully resonating for me. A subsequent commenter threw down a bigger challenge: "I'm reading some comments that sound a little like excuses for the films - useful boredom, viewing conditions, not cinephile enough - but neither Mr. Kenny nor anyone else has said a word about what it is that's to be gotten out of the films when everything is just right." 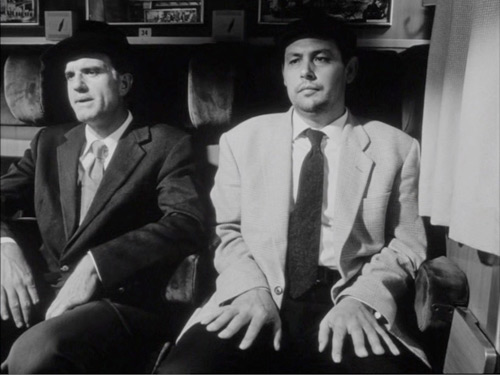 Well. Not to weasel out of that question, but I do think here Gilbert Adair's reflections on the filmmakers (from an entry in his compendium Flickers) are worth citing at length: "It's widely believed [...] that their films are essentially cerebral exercises, interesting for their 'ideas'. In fact, the ideas are always quite simple and straightforward in themselves, albeit long reflected upon; and if one's enthusiasm for The Death of Empedocles is based on the mere fact that Hölderlin's poetry (the film is an adaptation of an incomplete verse drama by the German romantic poet) has been allotted to voices untrained to speak it in the orthodox style, one might just as well have stayed home and recited the play oneself. What matters, rather, is the physical presence of the text, of the speaker, of his gestures as he delivers Hölderin's lines, of the way in which his body moves relative to the landscape and the frame, even of the impeccable cut of his toga as seen against the magnificence of the natural settings. The cinema, in other words." (All emphases Adair's.) All good and true and fair enough, and still begging (if not amplifying) the question: can even an exemplary home video experience give us the cinema, as it were? Jonathan Rosenbaum has argued that Bresson films pretty much don't exist on home video; and prior to the development of the DVD I would have completely agreed with him. I don't know that Rosenbaum has adapted his view in the advent of excellent versions of several Bresson films on disc, from Criterion and other firms. While they certainly cannot be said to offer a perfect presentation, they don't actively damage the work, either, as prior VHS Bressons clearly did.

But what of these films, also, in terms of their austerity, relative to the leftist politics the duo (Huillet died in 2006) long claimed to stand for/with? This leftist film-making that some might see as actively opposed to the notion of "entertainment?" When I think about it, I remember Robert Christgau's chiding of the putative agitprop on Henry Cow/Slapp Happy's In Praise of Learning with his citing of "less than winning musique concrete experiments that make such injunctions as 'Arise Work Men and seize/the Future' seem completely academic." Huillet and Straub's films sometimes honor the atonal music of Arnold Schoenberg, but they never enter the realm of abstraction. Does the fact that I myself find Slapp Happy/Henry Cow's musique concrete experiments more immediately engaging than the straightforward dryness of Anna Magdalena Bach, which "chronicles" a period in Bach's life via the journals of his second wife, and is largely comprised of static shots in which musicians in period dress play Bach music in real time say more about me or about the respective works of art? To extend the question outward, do the working classes go to the cinema (or the multiplex) in order to experience that which Adair refers to as "the cinema"? And if not, what does that mean for these films? And for their makers? Remember, when being honored at the 2006 Venice Film Festival, Straub sent a message protesting its security measures that read in part as follows:  "I wouldn’t be able to be festive in a festival where there are so many public and private police looking for a terrorist—I am the terrorist, and I tell you, paraphrasing Franco Fortini: so long as there’s American imperialistic capitalism, there’ll never be enough terrorists in the world." Whoo-hoo. This got poor jury member Cameron Crowe so antsy that he apparently suggested rescinding the honor the filmmakers were to receive.

Is what the films have to offer entirely predicated on the difficulty of what they offer, experientially, and is that finally what is to be "gotten" out of them? Do they merely exist in order to bring up these particular questions?

In any event, there is very little in any Huillet/Straub film that touches a pleasure center in the traditional way, or maybe we should say the received way. Chronicle of Anna Magdelena Bach is absolutely ruthless in its project to de-mystify Bach (Ryland Walker Knight's notes on this are particularly well-put; see also Gang of Four's song "Not Great Men"); one IMDb user responds to this de-mystification with genuine vehemence, and then directs his fellows to Forman's Amadeus, which of course constitutes some kind of de-mystification of Mozart. Or we might say poses as a de-mystification, as its dramatic devices, none of which I intend to characterize as inherently deplorable here, in themselves constitute a form of deception. So maybe the biggest question should be: can you handle the/their truth? Are you even inclined to give it the time of day, as it were?

Now for the wonky, commodity-assessment stuff. The New Wave disc of Bach offers a somewhat more satisfying viewing experience overall than the now-out-of-print (and fetching very unpopular prices) 2005 version released on New Yorker Home Video. This is not, however, hugely apparent via screen captures. 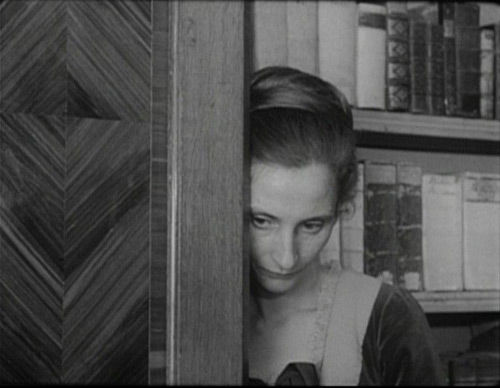 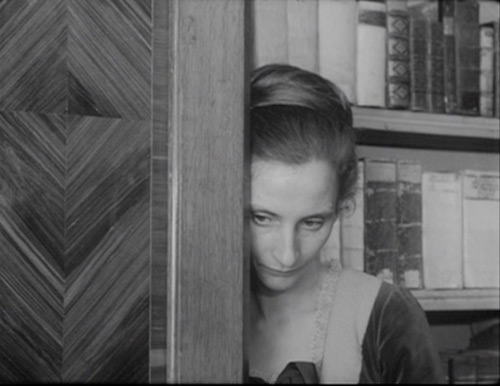 You can see the detailing in the woodworking in the door at left is more discernible in the screen cap from the New Wave edition, and isn't that exciting. The other two films, featuring more overtly handsome photography courtesy of William Lubtchansky, look quite marvelous. Louvre, which consists largely of shots of painting, is particularly marvelous, rendering the colors of said paintings quite vividly without ever blowing them out, which any photographer will tell you is really, really difficult.

The discs, unlike the extras-laden Edition Filmuseum disc of the duo's Class Relations, are without supplements. They do, as one would expect, feature optional English subtitles.