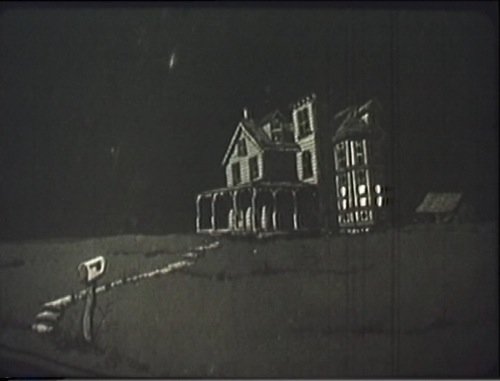 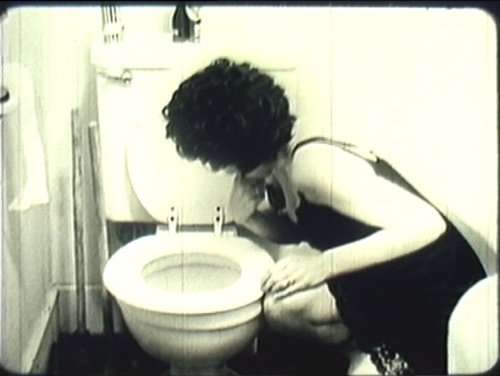 I bring this up not to creep you out, but to make a note of the psychic disruption that a hardcore sex scene can cause when you're under the impression that you're watching a softcore film, or just a not-too-terribly sexually oriented film to begin with. Okay, that sort of thing doesn't much happen in the latter sort of film. But you know what I mean. For latter day watchers of Waters' Pink Flamingos, up until its still-justly-notorious dog-turd eating finale, the most shocking thing about the chicken-you-know-whatting scene isn't so much the mistreatment of the chicken but the fact that the humans are, you know, actually doing it. And that they're doing it so unerotically, so unattractively, is part and parcel of the very negative...frisson of the moment.

The extremely peculiar Thundercrack, made a scant three years after Flamingos, abound with these moments. At first, with its risible "establishing" shots of a painted "old dark house" (see above), it plays like an extremely self-conscious attempt at so-bad-it's-good Camp or some such thing. Then it shifts into more overtly Waters-esque territory as one of the lead characters, the house in question's resident Mrs. Hammond, is seen sprucing herself up for an uninvited guest by forcing herself to vomit; her wig naturally falls into the toilet bowl. And she naturally retrieves it and replaces it on her head. A little later one of the many guests who will arrive at the house and tell a strange tale bathes, and inadvertently masturbates Mrs. Hammond, who is played by one Marion Eaton, who if I may be permitted to say so is not nearly as comely a specimen of humanity as Mary Mendum. Yes, like many of Waters' early films, this is one of those pictures featuring copious nudity from performers whom you may have never wished to see naked. It's the price you pay for your lascivious desires, you perv. "You want nudity?" the film asks you, aggressively, before whipping it out and telling you to suck on it. 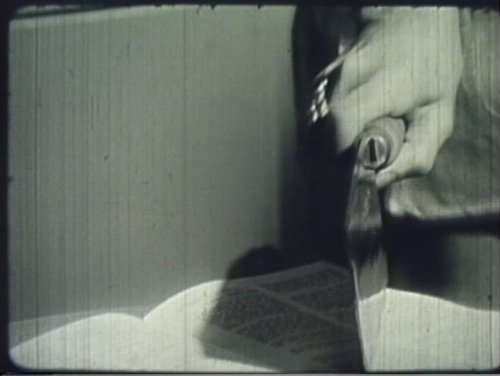 As in this shot...that cleaver there just came this close to cleaving a real-life, flaccid penis. "Who needs to see this kind of stuff?" your mom might ask you, if she knew you were watching this, and she'd have a point. 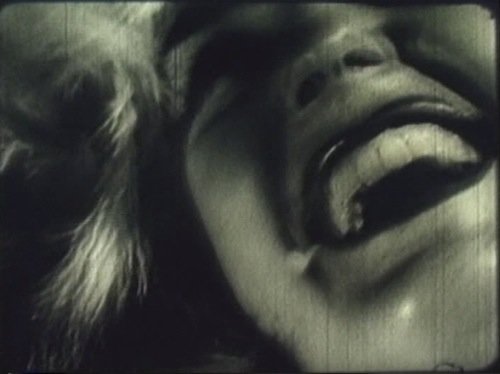 For what kind of film is this ostensible "cult classic," really? The weird pastiche elements that dot it throughout, such as the sub-Vorkapich dream/flashback montages, one of which is the source for the above screen capture, mark its director, Curt McDowell, as a man of a particular sensibility, while the porn elements place him in a particular time and space. It is obviously no accident that the man was a friend and cohort of George Kuchar, who co-wrote the film and who appears in it as a man who...dresses in drag to have sex with a fellow in an ape suit. 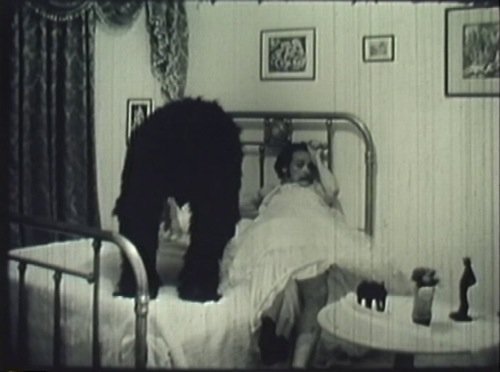 The counterculture and its leftovers were certainly not all peace and love, nosirree Bob. And the film's preoccupation with digital and/or oral stimulation as the prominent carnal-action mode put me in mind of a certain other completely bizarre later film, the Greek-made 1990 Singapore Sling, which plays like Grey Gardens meets Eraserhead meets...well, there's no other title that really fits, so I'm gonna have to come out and type it...Tug Jobs. Which film I came upon on French television one night in Cannes and was very confused by, but that's another story.

As the screen caps above testify, the Region 2 PAL disc of the film, from the Netherlands-based Shock/Studio 2602 label, looks like crap, and that's even allowing for the fact that that the film was originally "treated" with scratches and such to give it an authentic "old movie" feel. I am compelled, even as I ponder the mystery of the film itself, to implore you not to waste your money on this disc. Instead, wait until 2011, when Synapse films is due to release a restored version of the picture—the most extensive restoration job the company has done, according to its honcho, Don May—at an expanded length and with many extras. It's all being approved of by one of the film's stars, Melinda McDowell, brother of director Curt, who died in 1987. Maybe in the extras she'll reveal what it's like to be directed by one's brother in what is largely a pornographic film. Hell, that's something I'd like to know. And perhaps the extras will also help us get just what we're supposed to make of the damn thing, because even after all this I'm still largely befuddled by the experience. I do note, though, that Synapse is the DVD label responsible for excellent discs of, yes, The Image and Singapore Sling.