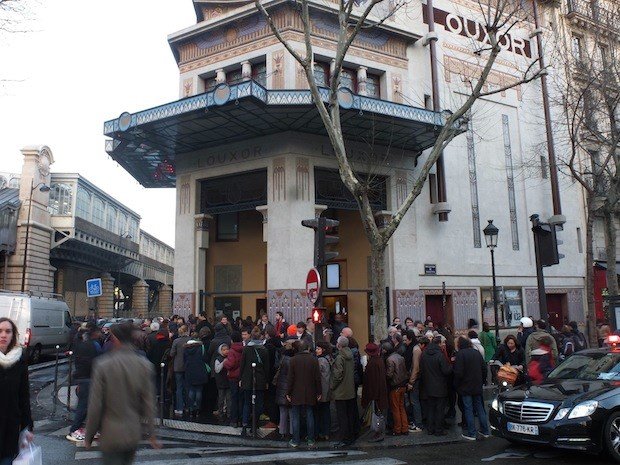 One of the many nice things about Le Louxor in Paris is that after a screening you can go up to the cinema's terrace with people you shared a few comments with while coming out of the theatre and have a quick coffee and chat, enjoying a view on the Sacré-Coeur. No, no, not the Amélie Poulain syndrome, please; just a coffee that is not expensive and a view on the neighborhood we live in… 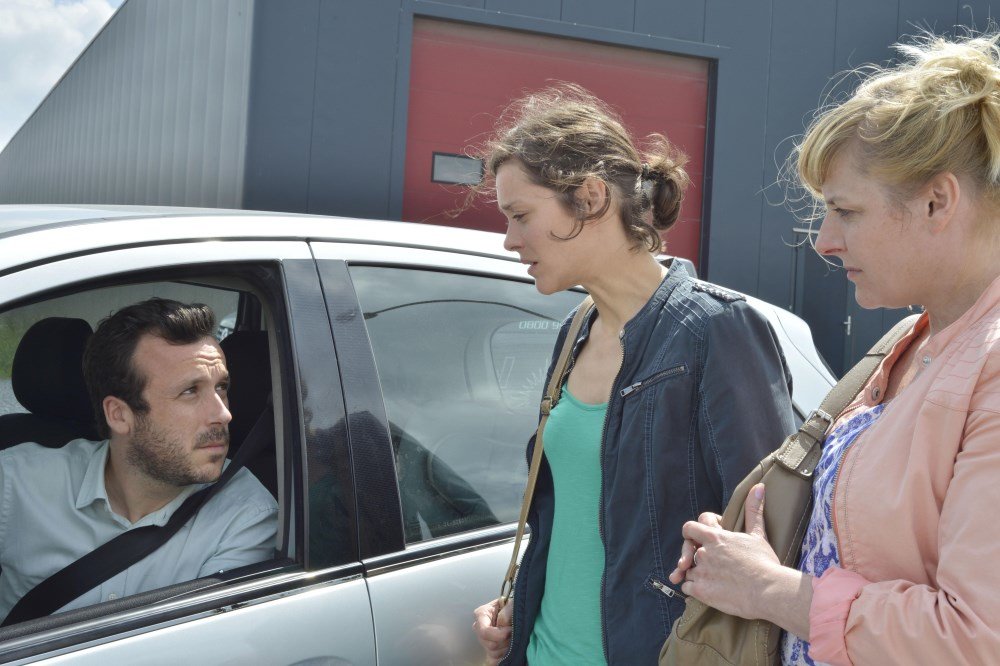 So, we were trying to pitch the Dardenne brothers film we had just seen. And here we went: Sandra, a worker in a solar panel factory, wife of Manu and mother of two, is just out of a depression. The factory's boss has made her co-workers vote upon a typically managerial blackmail: fire Sandra and keep their annual bonus, or keep her and lose it. Encouraged out of passivity by her husband and by a friend, Sandra has the short time of a weekend to convince, one by one, a majority of her colleagues to reverse their vote and give up their bonus so that she can keep her job.

For many of us, the Dardenne's brothers new film appeared like a strange doppelgänger piece: Rosetta's shadow seemed to follow the body of Sandra / Marion Cotillard at each (physical and moral) step of this new story. Could Sandra be "Rosetta" 15 years later?* Between 1999 and 2014, the Dardenne Bros have walked a line first designed in La promesse: an exploration of parenthood, an étude about fathers and sons / wives and husbands in the most (updated, if one may say) contemporary territories of destitution and survival. Two Days One Night is a comeback and an update of the "Rosetta question": how far the "system" and its masters can push their slaves into disgrace, having them give up their last treasure, be it their dignity, their self esteem, some basic moral courage or their simple will to remain awake.

Rosetta opens with the slamming of doors and furious kicking and punching from an enraged Rosetta having lost her job, goes on with her struggling through violently physical episodes, showing her almost killed, then almost killing, then double crossing her only friend Riquet (already played by Fabrizio Rongione, now Sandra's husband Manu) before she almost succumbs to the temptation of lethal sleep. Fifteen years later, a sleeping Sandra is awaken by the fatal phone call that gives her the bad news of the first vote. Between these two stories of how in contemporary capitalism (to put it bluntly) various forms of management make sure that profit-making is being taken care of by the working class itself—through hoodlum behavior / through a parody of democracy and self-management—the will to give up and sleep forever remains the main trait of a morally and economically cornered woman.

While Rosetta ended in a form of hopeful suspension,  Two Days, One Night's tight script of tickling clock, MacGuffin and twists make Sandra appear strongly like the main instrument (or engine) of a play of shifting points of views. Sorry for waving big names, but one might say "like going from Bresson to Lang." The infernal machine never stops, always sending Sandra to trigger more shifting of points of view and more unveiling of issues in the viewer's mind. More than in Rosetta, we are this time invited (with the brothers' usual ethical approach) to regularly change places and vantage points, leaving out any possible judgmental position to focus more and more on the real infernal machine: the one that is run by the factory boss himself.

In the end, bringing Sandra back to life (with a quite Riquet-like deus ex machina episode) is not only the way to a final moral issue (not a surprising one, but the melodramatic touch is welcomed). Moreover, as we watch Sandra's back as she walks away from the camera, we understand how far the masters' power can go:  having people burn their energy just to outplay their brutally simple plots, after they have gone through all the shades of shame, regaining a fragile feeling of being part of a community. Depression appears now for what it was: the tragically banal illness of a class. What Sandra says to the manipulative foreman is: "You have no heart." Fifteen years earlier, Rosetta recited in a self-convincing mantra: "I have a normal life." Faced with what looks like the terrible failure of collective political action, the Dardenne brothers chose to dig into the very perversity of today's oppression, making Two Days, One Night a powerful political piece. At that point, never mind Marion Cotillard and her struggling with a fake Belgian accent and a difficulty to deliver "common people" dialog with acting actress tricks (typically adding an aspirated "h"—h aspiré—to the first word of every sentence, in order to "launch it," as if in a constant panting that is not always connected with the character's anxiety or physical movements). She is only (but deeply) a figure of Rosetta for today, a "mirror along the road" for a modern novel about oppression, a cinema star brilliantly used to put the viewers in front of a complex play of moral / political questions. The Dardennes' own Dana Andrews. 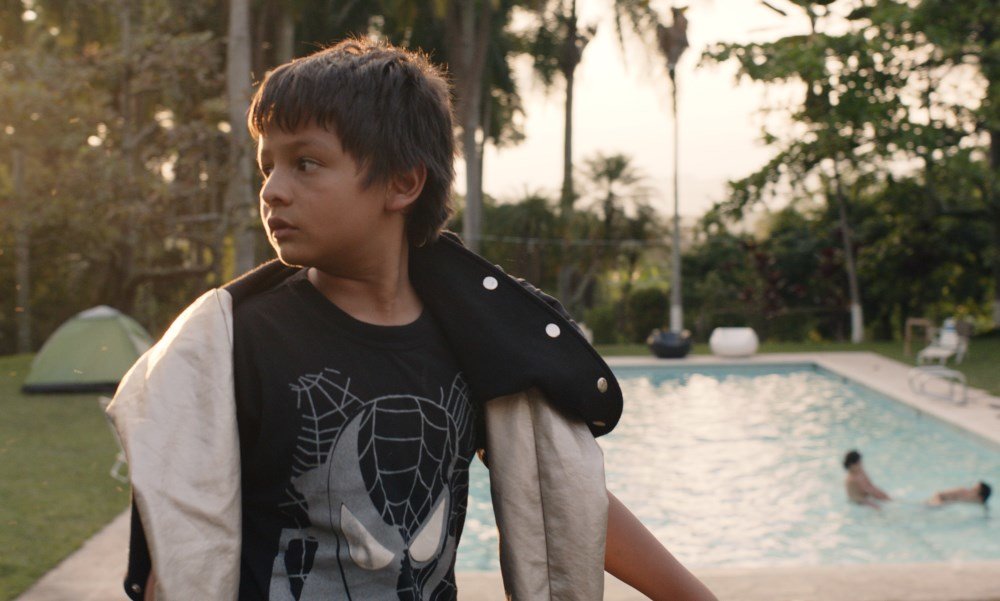 Later on, up on the terrace of Le Louxor, the small group of coffee drinkers did not find it far-fetched when I told them about a film from Critics' Week that appeared to connect with that of the Dardennes, Franco Lolli's first film Gente de bien ("Decent / Well off People"). The story is simple: in Bogota, 10-year-old Eric is left by his emigrating mother to live temporarily with his estranged father (a handyman who struggles to find jobs and pay his debts). The Christmas holidays have come. Eric steals money from well-off and sympathetic Maria Isabel, one of the father's employers, since the father cannot pay the rent for a better apartment. She "understands and forgives," thus giving herself a "mission" to rescue father and son from possible bigger problems. She invites father and son to spend some time with her family at their big mansion. But father first and then son will want to leave the mansion, after tensions and discomfort have come between them and the "decent" family.

The story may sound simple, yet its complexity lies in a subtle choice of episodes that the director make sound and look remarkably familiar, bringing back some of the viewer's experience, whatever the side of the social barrier he or she may be. Here again, as in the Dardennes' film, realism and "natural" acting are the tools for a play of positions, vantage points and the shifting of points of view. At the end of the day, all characters have appeared both sympathetic and irritating, collectively exposing what the well-off lady's good will is about: a generous move that can never make for the harshness of the social barrier, nor can it eliminate these feelings of "belonging" that may be more important than money itself. Harsher then, the brave and brilliant choice of the filmmaker to have shown young Eric trapped in the desire to "be part of it," a world made of nice toys, clothes and parties, before he finds no way to rebel but brutal impoliteness and ungratefulness.  In a perfectly non-judgmental move, the film has built a discrete but strong figure of being "non reconciled" ("nicht versöhnt").  As in the Dardennes' film, a last melodramatic move (involving a dog) brings father and son together, and as we watch them walking away from the camera, obviously bringing back De Sica's "thief" and his son, the emotion also triggers meditation about many spiritual and emotional traits of class differences.

*The president of the jury who awarded Rosetta in 199 was...David Cronenberg; but this a just a reminder of how little things appear to change.﻿ 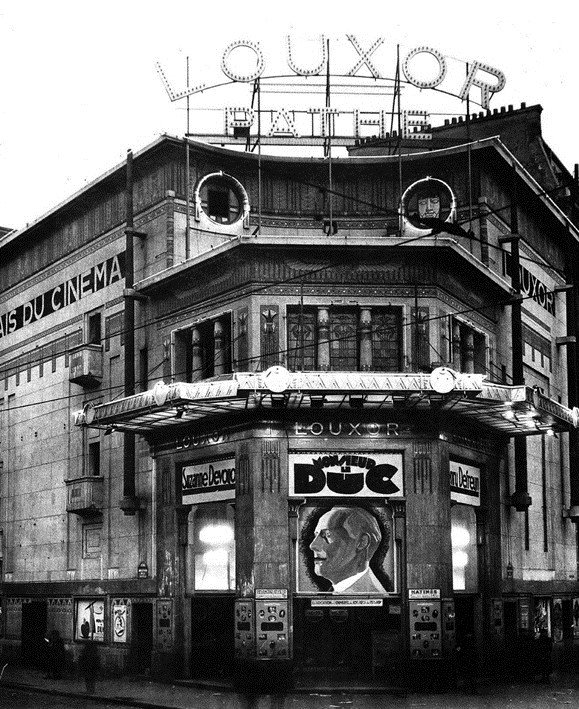