Above: Two of three guides in Chris Marker's photography exhibit that explicitly link his vérité metro photography with classical painting.

We should thank the voracious observers among us for keeping a look out—they seem so few, amongst all the unquestioning images of the contemporary media.  Foremost among mobile visionaries, by age and certainly by reputation, is Left Bank quasi-nouvelle vague affiliate and all around proliferate and perspicacious explorer of images and interrogator of the world around us, Chris Marker.  He seems to be making less films these days (but that's okay, we should cut masters a break once they hit the 90-year mark, as Marker will this summer), but he is forever curious, sowing seeds across Flickr, the video game Second Life, and seemingly every media format in between.

Marker always—for me at least—comes as a surprise, even re-watching his (tragically few) canonical works La Jetée and Sans Soleil for the umpteenth time; and so did this: an exhibit of digital photographs by Marker taken in the Paris metro.  The exhibit is titled "PASSENGERS" and is currently on display through June 4 in New York across two separate gallery locations (Peter Blum in SoHo and in Chelsea) featuring different photographs.

The content of the photographs should come as no surprise. The loneliness, self-absorption, isolation and paradoxical intimacy of subway travelers should be as familiar to tourists (who view it as unique) as it is to inhabitants of cities with underground transit systems (who view such temporary states of existence as routine-everyday).  And indeed, Marker's images, all lo-fi consumer grade digital, accentuate the banality of the subject's "discovery."  But all it takes is for someone to pay attention—and with a marked attention (and preference for female faces, a Marker signature) the series strives not to re-cast or re-contextualize the spaces, the people or their existences through these photographs, but rather to pick up a pattern, catch it in surreptitious, fleeting glances.

Marker finds, in his secret photographs, expressions of reflection (on glass) and passing sadness and stoicism (on faces), of sculptural postures (of bodies), and the insistence, like that of the Impressionists over a hundred years before, that snatches of life pictured in all the fluidity of modern living and the inexactitude of modern perception (many images seem strangely manipulated, with low-grade pixelated flourishes and blurrings) can reveal a beauty that speaks towards ancient art at the same time it is utterly of the present.  A few markers (two above, one below) signal a guidance by the auteur; and the quote below, inspired by Cocteau, humbly says it best:

Cocteau used to say that at night, statues escape from museums and go walking in the streets.  During my peregrinations in the Paris Metro, I sometimes made such unusual encounters.  Models of famous painters were still among us, and I was lucky enough to have them sitting in front of me.  —Chris Marker 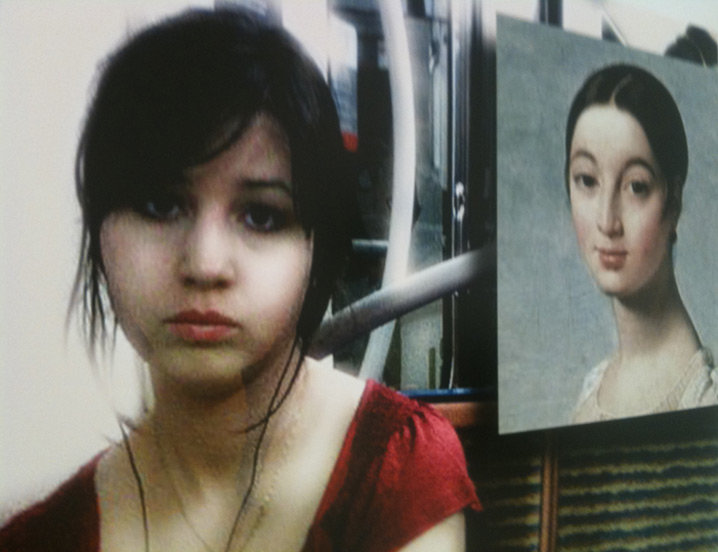 (Above, instances of Marker's manipulation; above left is a detail.) 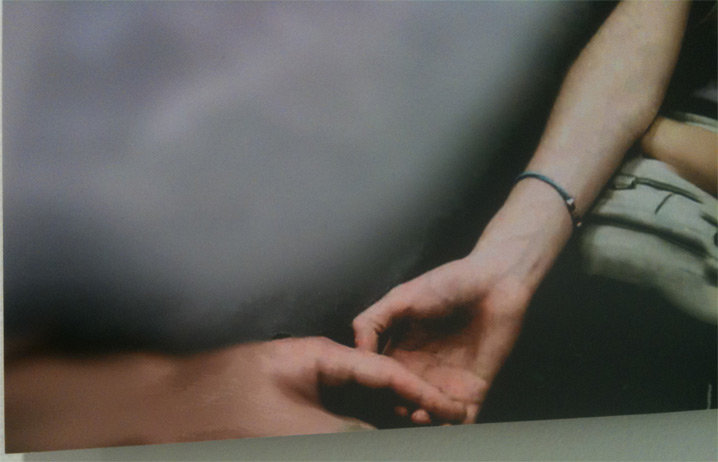