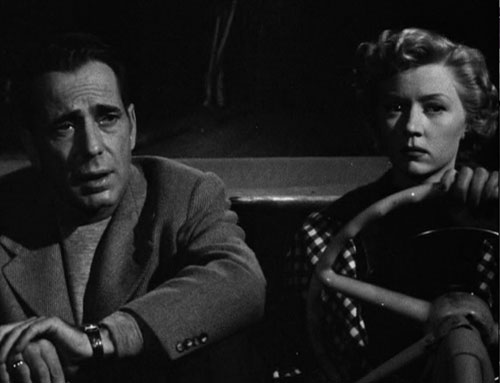 Dixon Steele. What a wonderful name—what a wonderfully preposterous name—to bestow upon a fictional writer. To bestow, particularly, on this writer, the protagonist of Nicholas Ray's 1950 In A Lonely Place. (Ray directed from a script by Andrew Solt; Edward H. North is credtied for adapting a story by Dorothy B. Hughes.) This particular writer—played by Humphrey Bogart in something of a career apotheosis—is simultaneously the smartest guy in the room  and a very nearly washed up Hollywood hack who once had The Stuff. He gets a shot at getting The Stuff back after he falls in love. Unfortunately, the moody, often seemingly emotionally disconnected Steele picks a bad time to fall in love, as his affair with young, idiosyncratic actress Laurel Grey blossoms while Steele is under suspicion for the murder of a hat check girl. The lonely place of the title is with Steele always, giving his character an existential halo that callow real-life writers everywhere are occasionally compelled to bestow on themselves. (Full disclosure: I once used "Dixon Steele" as a pen name for professional engagement in my mid-twenties.)

Ray's film is of course a touchstone picture, a galvanizing hybrid of film-noir expressionism and Cassavettes-anticipating emotional rawness. (Much of the film, and in particular the ending, was a result of improvisation, not a very common practice in Hollywood at the time.) It's very nearly postmodern in its deconstruction of screen idol Bogart. Its dissection of doomed romanticism is still pretty much unequaled by any other picture, and has provided voluminous inspirations for filmmakers from Godard to Wenders and beyond. So it's a little interesting to be reminded that the picture is only a few minutes longer than ninety. The film is so packed with meaningful detail; one could write hundreds of words about the way Ray treats the film's two African-American characters, who appear solely as walk-ons, but are portrayed with a rare dignity that points to Ray's social consciousness that same way that an encounter with a nightclub singer in The Big Night (a picture from the same year) points to that of the soon-to-be-exiled Joseph Losey, a kind of fellow traveler of Ray's and of course an auteur cut from a similar cloth. 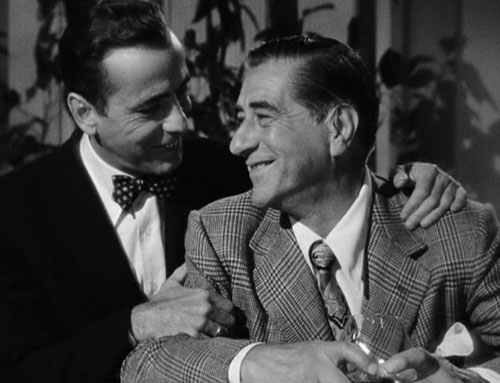 So dense and complex is this brisk picture that Dana Polan, in his BFI Film Classics monograph on it, is able to credibly interpret it as a "woman's film." As for myself, watching it again in advance of its upcoming engagement at New York's Film Forum, where it'll show in a sparkling new print, I was struck at how, almost as acutely as Wilder's The Lost Weekend, the picture presents a sort of case study in alcoholism.

Steele is something of an enigma, even to those closest to him. In a coincidence that would be hard to swallow in a less adept film, one of Steele's army colleagues from World War II is a detective on the Beverly Hills police force, and his overzealous boss manipulates him into using that connection to make a murder case against Steele. The detective allows to the captain that, back in the army, none of Steele's men really understood him, but all respected him. Later in the picture, another character observes of Steele, "Why can't he be like other people?" Steele sets himself apart, and he does so deliberately; one hallmark of the chronic drinker is his/her belief that he/she is both something special and completely worthless, and drink can be a particularly effective tool in creating the alienation effect such a schizoid state of self-worth calls for.

But Steele is not the film's drunkard. That role is played by Robert Warwick, as Charlie Waterman, an on-the-skids Barrymore type with whom Steele trades lines of Shakespeare. Steele buys drinks for, and lends money to, the old sot; his kindness to the fellow, whom everyone else on Steele's circuit regards with a mixture of embarassment and often not-even-barely-veiled contempt, paint Steele as an old-school mensch underneath his posturing. 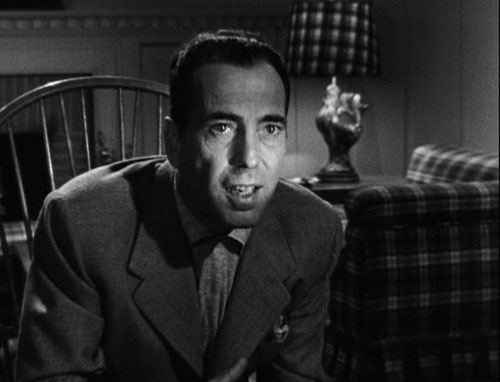 Does Steele, in fact, posture? He certainly does enjoy putting on a show, and almost always at the most inappropriate time. When called to the police station to be questioned about the murder, Steele's detachment and irritation at being gotten out of bed at an ungodly hour are both genuine, but someone with a more heightened sensitivity to social niceties would put those aside and react in a more expected way—"Oh, how terrible," that sort of thing. Instead, Steele makes a point of acting peevish and cold, which so upsets the police captain Lochner (Carl Benton Reid's unfussy portrayal creates a really indelible portrait of a pissy little authoritarian creep) that he decides he really needs to pin the murder on Steele. Similarly, Steele's after-dinner extrapolation of the murder for his detective pal and perky wife, heightened by some extra-diegetic expressionist lighting effects from cinematographer Burnett Guffey, is, for Steele, a gratuitous bit of exhibitionism with a find-me-guilty flourish. It doesn't matter that Steele, who's described by others in the picture as "hard-drinking," or some such, is never actually depicted as being drunk. This is all, as they say, textbook stuff. 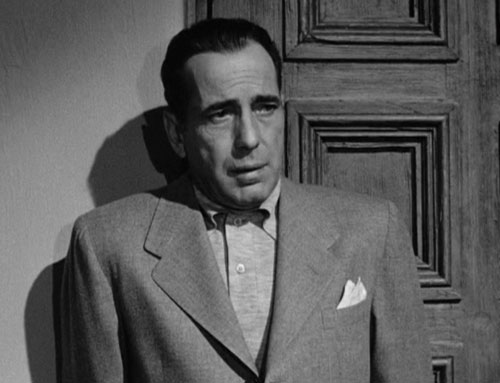 Ray was nothing if not a great director of behavior, and Bogart/Steele's behavior in the scene directly after he elaborates his murder theory is particularly instructive, fascinating. Steele pays a midnight call on Laurel, who he's bluntly expressed interest in. She initially said she didn't want to be rushed, but Steele's gone from impulsive to compulsive in mere hours. He comes into her apartment for a "what's it gonna be" confrontation, but rather than approach her, he actually moves back, in a kind of cower, like a trapped animal. It is only after she gives her acceptance that he can even go near her. On screen this registers with equal levels of poetry and despair conquered by elation, but regarded with a dispassionate eye it is, again, case-study stuff. 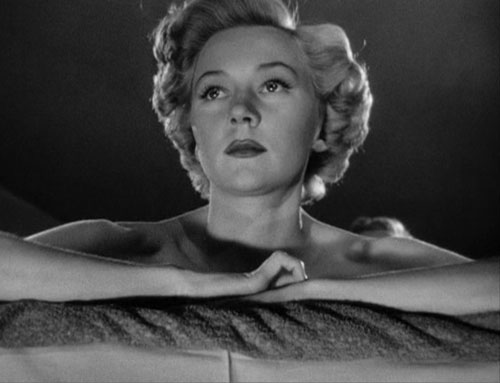 So too with Steele's absolute inability to ever make a real apology, his blind, savage rages, and finally the paranoia, which Bogart the actor would continue to hone in his portrayal of Captain Queeg in The Caine Mutiny (which eventually gave birth to the real-life Richard Nixon). The film's final shot shows us Steele under an archway, in that lonely place for good, as Laurel looks at him with love but not forgiveness, for even if he could be forgiven, he wouldn't allow himself to be. Steele might be best served by walking through that archway and into an AA meeting. But he's not going to.