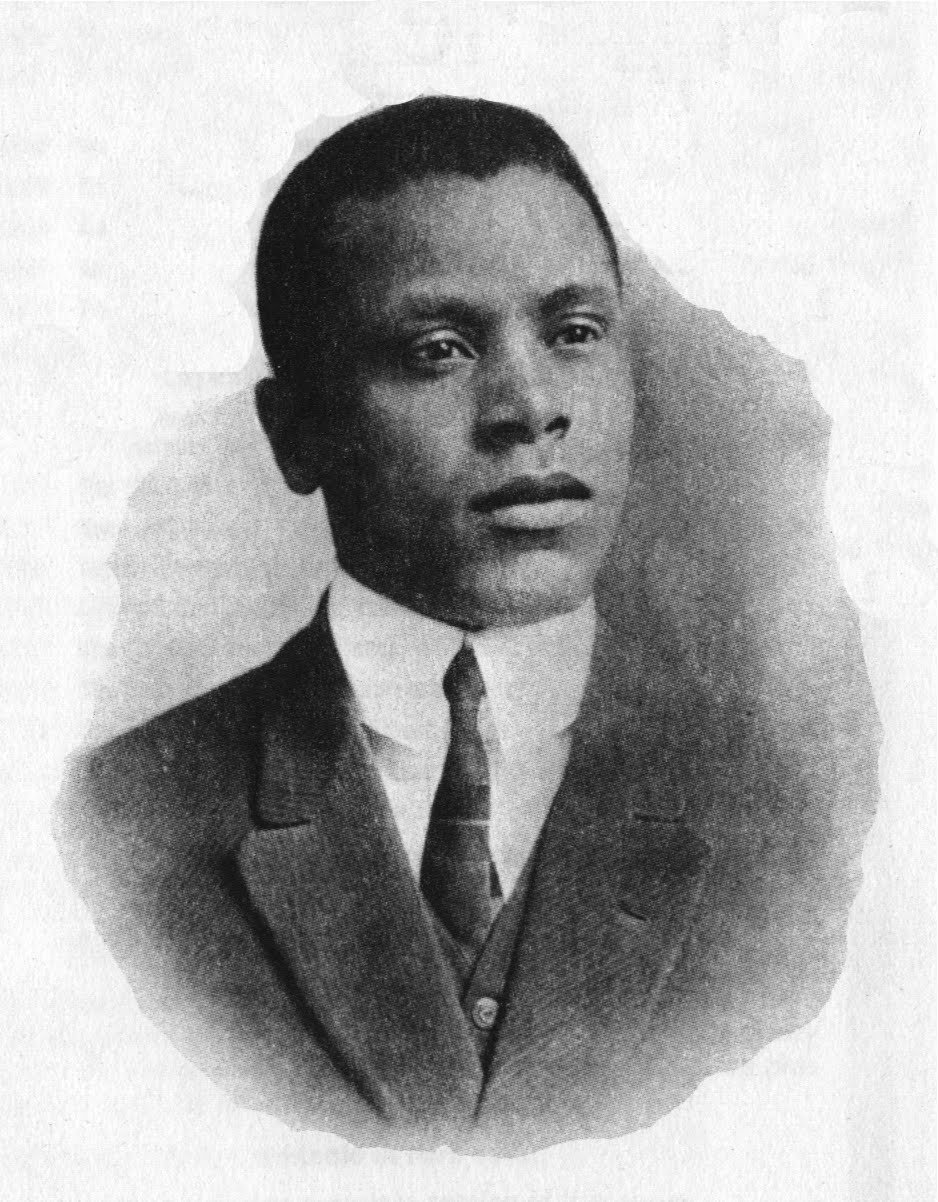 Read some IMDb synopses of Oscar Micheaux (1884-1951) films, and the filmmaker’s commitment to dealing with racial prejudice becomes clear. The Symbol of the Unconquered (1920): “Racists learn that the land a negro owns lies over a vast oil field, and threaten his life when he refuses to sell.” Murder in Harlem (1935): “A black night watchman at a chemical factory finds the body of a murdered white woman. After he reports it, he finds himself accused of the murder.” God’s Step Children (1938): “A young light-skinned Negress struggles to find her place in both the black and the white worlds.”

Micheaux was the fifth of over ten children born of former slaves on a farm in Metropolis, Illinois. Soon after moving to Chicago at the age of 17, he took up a job in the stockyards, and, later, another at the steel mills. He established a shoeshine stand in the suburbs and became a Pullman porter on the railroads—a job that provided financial security and a number of influential contacts who would later help him in his career as a filmmaker. Before he made his first film, Micheaux bought land in South Dakota and, during the eight years he homesteaded there, anonymously self-published his first novel, The Conquest: The Story of a Negro Pioneer (1913).

It was Micheaux’s autobiographical 1917 novel The Homesteader—which documented his own failed marriage and loss of land—that garnered attention from the film industry. George and Noble Johnson had set up the Lincoln Motion Picture Company in Nebraska two years previously with the intention of producing films for African-American audiences and encouraging and developing positive depictions of the black experience. Demanding direct involvement in his novel’s adaptation, Micheaux clashed with the Johnsons and negotiations faltered. Soon after, Micheaux founded the Micheaux Film and Book Company. Its first production was a feature-length adaptation of The Homesteader in 1919.

Of the 40-plus films Micheaux subsequently produced and directed, many have been lost. A large part of this is no doubt due to the fact he worked independently, outside the confines of the vertically integrated set-up: his were ‘race movies’, a genre entailing all-black casts for all-black audiences, around 500 of which were made between the 1910s and early 1950s. In contrast to many other companies that produced race films, however, the Micheaux Film Corporation (as it was later known) was entirely black-owned: its proud, unique selling point was that its films were scripted and produced exclusively by African Americans.

None of this is to claim Micheaux’s films are very good. While his prolific output was justified by a sustained demand from and popularity with his target audiences, the films’ chief point of interest today has little to do with pioneering form or narrative style. They tend to be crudely made, badly acted and incoherent and unwieldy when it comes to plot. As quickly evinced by a small retrospective at the 25th edition of FIDMarseille, however, Micheaux was consciously aspiring to a formal sophistication, through which his films could be taken seriously by black audiences and, in turn, be viewed as something to aspire to. He did so with severely limited resources. By the time the fifth and final work screened in Marseille, it had become something of an open secret that the films themselves were terrible.

Contradictions arise. On the one hand, here were films attempting (and achieving) an appreciably enclosed universe that sparkled with a positive energy toward African Americans that those in Hollywood were either denying or relegating to the periphery. On the other hand, the very process of employing established genres such as the musical, melodrama and gangster film (often in the same picture) seems, in the first instance, to have exposed Micheaux’s own comparative limitations, and, in the second, to have distorted his otherwise progressive intentions into a kind of unhelpful mimicry of a mainstream culture from which he and other blacks were precluded.

One notable absence in Micheaux is depictions of social squalor: no sustained misery to match the pre-Code likes of I Am a Fugitive from a Chain Gang (1932), just superficial crime and/or emotional deceit across a palpably middle-class black ensemble. Indeed, tensions within the black community figure large. Amidst the ostensibly well-to-do proceedings here appears to be a great ambivalence towards working-class blacks. Gangsters, hustlers, drug-pushers, speakeasy owners—all suited and booted in suave attire and equipped with silver-tongued charm (never mind the hilariously wooden line-delivery). There’s something audaciously blunt and even willingly problematic in those scenes in which women play gullible men for all their worth, or else ask their fellas to beat them ’cause it’s the only way they can love ’em.

Micheaux’s own worldview was no doubt informed by a dispute with his first wife and father-in-law, which resulted in his aforementioned loss of South Dakota land before he ventured into films. But there’s something gently subversive in his stereotypes. Gangsters, hustlers, drug-pushers, speakeasy owners—it’s as if Micheaux consciously set out to take Hollywood’s uneasy and reductive depictions of Afro-Americans to their logical extreme, to a kind of heightened reality not to reinforce such stereotypes but to, (a) dismantle them, and/or (b) use them as a simple enough crutch for quick, entertaining tales.

Put another way, Micheaux’s films flip Hollywood not to change its conventions but merely its perspective. These are the same films, the same genres, only told from the otherwise marginalized black perspective. At the same time as depicting a class of blacks that were, contradictorily, somewhat familiar stereotypes with just enough of a petty-bourgeois cloak to imbue aspirational worth, Micheaux’s films seem to warn against an ambition based upon white values.

In a particularly preachy-toned scene in The Exile (1931)—from which FID’s retrospective took its apt name—one character warns another: “We’ve got too many educated negroes now in this country, weighed down with degrees and starving to death.” Micheaux’s imitative formal framework is contradicted by such scathing dismissals of social convention. It’s as if the future of black culture lay, for him, in an opposition to hegemony rather than in a reproduction of it. To be assimilated, to be taken seriously, is a cultural right—not something to be given or won. 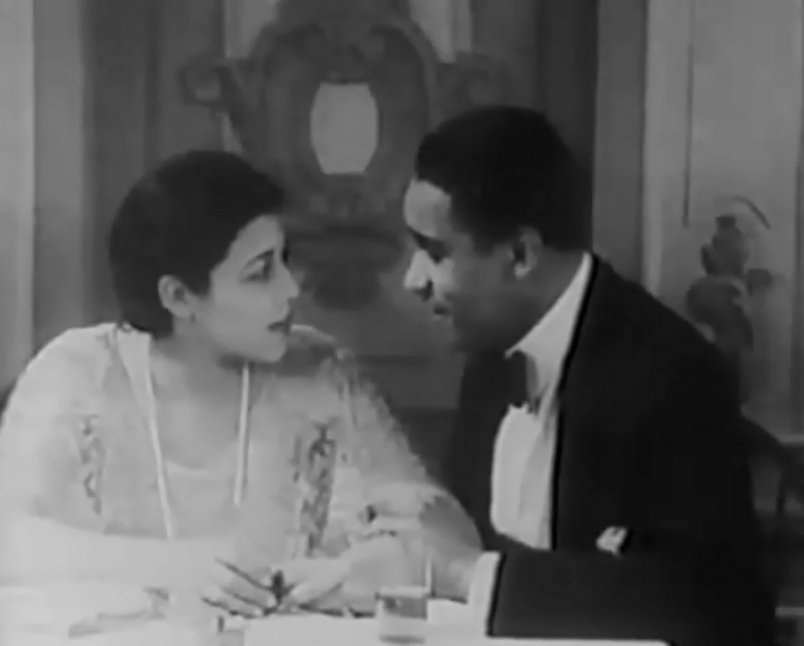 To this end, Ten Minutes to Live (1932) represents the worst and best of Micheaux. Somewhat confusingly, the film is based on a collection of three short stories called Harlem After Midnight (author and publication date unknown), but itself presents only two stories, “The Faker” and “The Killer,” neither of which is linked to the other apart from the fact that both seem to be witnessed, imagined or remembered by the same patrons of a Harlem nightclub called the Lybia, seemingly over the course of one evening. In the first, Marshall, a conman posing as a film director, is pointed to the Lybia, where, he’s told, he’s sure to find his next casting choice. Known for “luring girls to their ruin,” Marshall acquaints the woman, one Ida Morton, but his evening’s plans are complicated by the arrival of another woman, who has come to avenge the death of a friend.

In the second part, another patron of the Lybia, Letha Watkins, finds her date with fiancé Martin ruined by the arrival of a letter addressed to her by deaf mute gangster Morvis—who warns her she has ten minutes to live, and that she’ll receive a second letter(!) just before her murder. Known as the “Escape King,” Morvis is revealed in an extended flashback to have been a Pullman porter—like Micheaux—who wrongly holds Letha responsible for his imprisonment and hard labor in a chain gang. For a clearer, more in-depth synopsis of this deliriously confusing film, see J. Ronald Green’s With a Crooked Stick: The Films of Oscar Micheaux.

Like other Micheaux efforts, Ten Minutes to Live is in ways a numbingly, bemusingly dull film whenever it’s telling a story. While conman Marshall is directed to a performer who “can sing and do any kind of dance you want,” Micheaux himself worked with actors whose talents were stiff at best. In concentrating all narrative incidents to the course of a single evening as well as one setting, the two-parter has a heightened melodrama that doesn’t quite hold together. Indeed, the rapidity with which Micheaux moved from one production to the next suggests story cohesion wasn’t his primary concern.

As such, the unwitting hilarity of Ten Minutes to Live is so prevalent that its features—incongruous cutaways, awkward line-deliveries, ludicrous plot twists and spatially disorienting eyeline matches—﻿begin to take on, unintentionally or otherwise, subversive qualities of their own. More crucially, the ‘one evening, one setting’ structure of the film facilitates the stuff that really matters—namely, those extended dance routines for which Micheaux acquired the palpably professional skills of actual nightclub performers. Ida Morton’s solo act takes the film into another class altogether, while ensemble routines have a verve and energy all their own. In this instance, the musical numbers were arranged by Donald Heywood, who appears as the Lybia’s master of ceremonies.

It’s in such scenes that Micheaux’s films show an undeniably documentarian quality—and he was keen to include them whenever he could. In Micheaux, the nightclub—whether in Harlem or elsewhere—is a living, working avatar of black urban life. It is an arena cohabited by a multitude of cinematic types, a place in which eternal love is declared, dreams are conjured, hopes are thwarted and thrills are sought. That the stories emerging from this dreamily fluid space are ludicrous seems, then, to be part of the charm. Their very outlandishness, their very implausibility—rooted as they are in the established genre codes of the time—double as an almost mocking echo of Hollywood.

And, in their oblique way, they included social commentaries of their own. J. Ronald Green calls Ten Minutes to Live “an extraordinary film” that “requires multiple viewing and engaged interpretation.” Certainly, as distracting as its crude technicalities may be, something invites deeper analysis in the way in which an otherwise throwaway character such as Morvis the “Escape King” undergoes a last-act redemption. In her book Literary Adaptations in Black American Cinema: From Micheaux to Toni Morrison, Barbara Tepa Lupack notes that Morvis is not “an entirely unsympathetic character.” Lupack quotes ‘bell hooks’ (pseudonym of social activist Gloria Jean Watkins): Morvis is “a symbolic mirroring of the voicelessness of black masculinity in racist culture during the 1930s”. Again, unintentionally or otherwise… Ironically, Micheaux made Morvis deaf-mute so that he could shoot a large part of the film like a silent, and thus save money.﻿

Author's note: The Oscar Micheaux retrospective was curated at the invitation of FIDMarseille by David Schwartz from the Museum of the Moving Image. A comprehensive retrospective ﻿will take place at the Museum in early 2015.