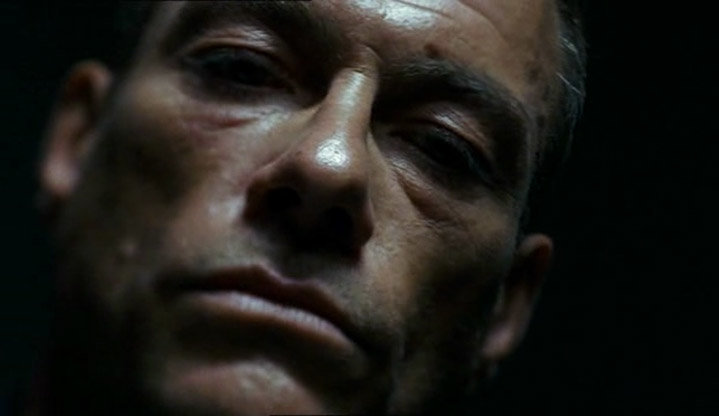 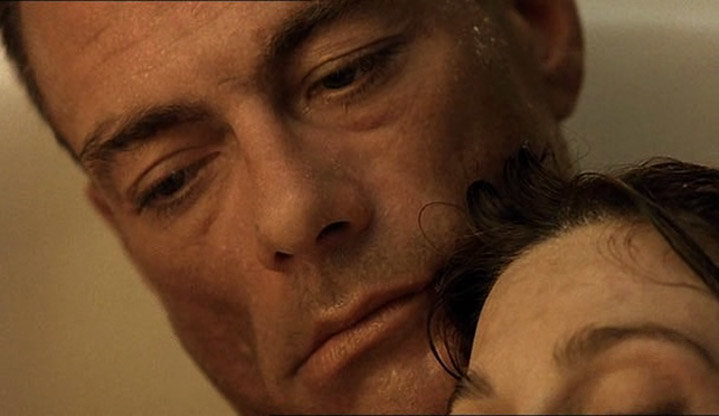 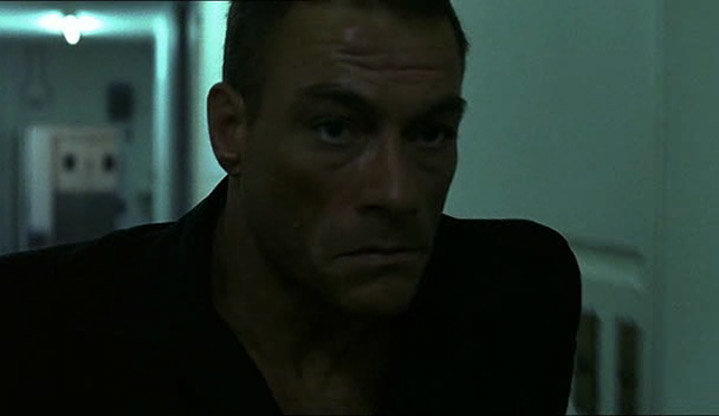 The negative image of all other action stars, who are defined by degrees of persistence, only Van Damme can lower his eyes and look as though he'll never raise them. Sure, Sylvester Stallone gets sad, but only Van Damme is ever miserable—and in the end what does in Stallone is his half-paralyzed face, which gives him the look of a man trapped inside himself. Emotion crawls out at odd angles from the cracks and crags around his eyelids and nose, and his forehead swells up red like a slab of beef. Van Damme's reactions come out through every pore of his skin, and, like the great silent actors of the past (and the great silent actors of the present: Denis Lavant, the late Markku Peltola, Anna Faris, etc.), he brings every muscle in his face into precise alignment.

For an action star, Van Damme has an unbearably sad face—and like Buster Keaton's blank mug, it's only gets sadder as he ages—but then again Van Damme has always been an anomaly: he's no good at delivering one-liners, he isn't terrifying and he looks ridiculous holding a gun. Unlike, say, Schwarzenegger, he looks exactly like a guy you fuck with: small, pretty, vulnerable, resigned to a life of getting punched in the face. The sadsack ass-kicker, with great big insomniac bags under his eyes. 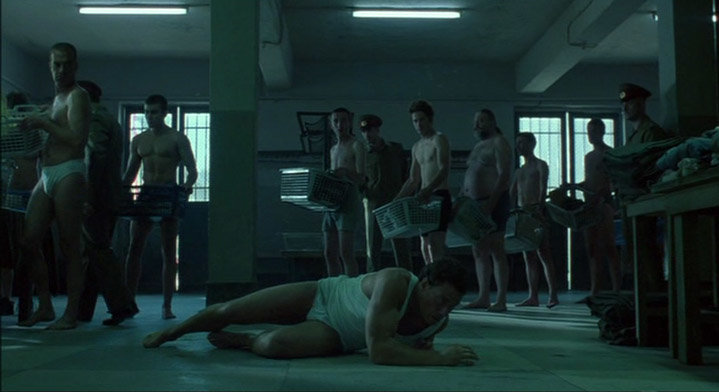 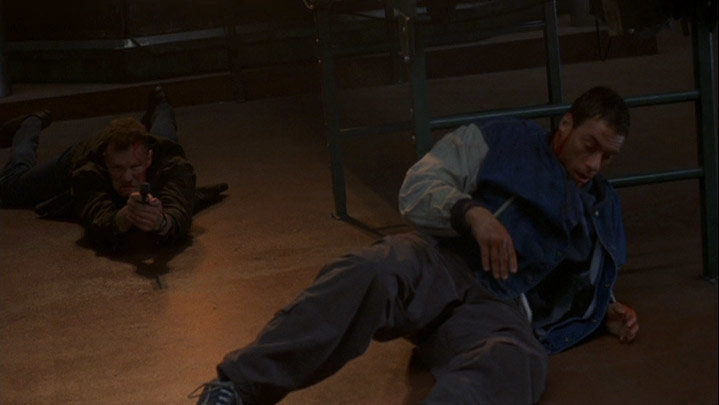 Of course Van Damme isn't merely a face: he is, first and foremost, a body. He isn’t very articulate in any language (though he has a peculiarly / singularly eloquent clunkiness and a weird speaking rhythm that alternates mush-mouthed outbursts with trailing feline cadences), but he possesses a vast physical erudition.

We’re late enough into the history of the modern action movie that it's possible to establish lineage—Statham can be traced back to fellow balding wise-ass Willis, and even Van Damme has produced some heirs, like Scott Adkins, the English mixed-martial-artist with Yevgeni Bauer-ian eyes—and late enough into Van Damme’s career to see that there aren’t many clear lineages leading to him, except maybe Bruce Lee. What Van Damme takes from Lee is a certain parading of finesse (and in that sense he’s more of a Hong Kong-style acrobat than an American-style action-movie tough guy, his signature kicks and splits taking the place of catchphrases), but he builds on that by extending the same self-driven precision to a vast catalogue of ordinary movements: crawls, slouches, shudders, pratfalls, shrugs. Equally athletic and quotidian—in short: a total physical perfomer. 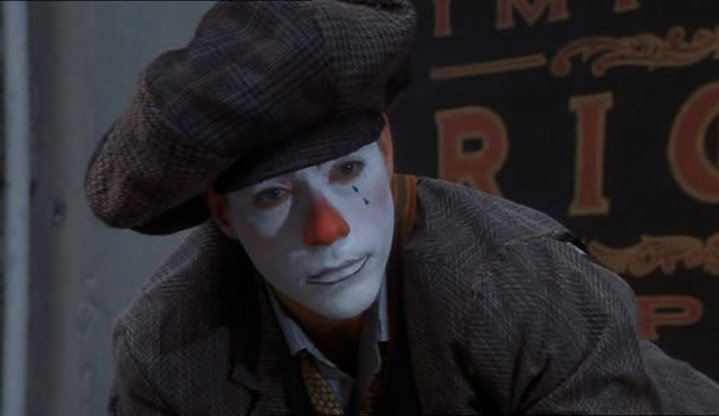 The name of Van Damme’s production company says it all: Rodin Entertainment. Sculpture for the masses. The fixing of movement (not just the subject's, but also—or mostly—the artist's) in space, divorced from time but not from history—that's the essence that cinema steals from sculpture, which a few filmmakers have tried to apply to individual moments and which Hollywood attempts to recreate on a mass scale. The essence of the action film is, of course, the mass-production of action—movement, noise, snappy talk. But here again Van Damme slouches alone, because his screen persona is based on hesitation—on the moments when he turns away from the camera (Legionnaire), gets knocked down and recomposes (Bloodsport), slowly breaks apart and then puts himself back together in a new shape (In Hell, which is more "dimestore Dostoevsky" than Jim Thompson ever was) or pauses.

Yeah, Van Damme can kick pretty damn high, but so can Jet Li and Tony Jaa—and they both do it better. But with Li or Jaa, there's only the kick, and with Van Damme there's the moment before and after. Schwarzenegger, meat-machine that he is, stops only to gather his strength (and that's more or less the joke in that Hamlet fantasy sequence in Last Action Hero: a man incapable of deliberation in the role of the Dane), and Willis, probably the only action star to get beaten up as much as Van Damme, keeps snarking it up even as he pulls broken glass out of his arm. The kind of CliffsNotes existentialism that Stallone's fond of leaves no room for hestitation; it's predicated on constant activity and a wolf-cry shout therapy solution to whatever he thinks might be the human condition, leaving no room for contemplation. His characters spend too much time describing why they're hesitating to actually hesitate. 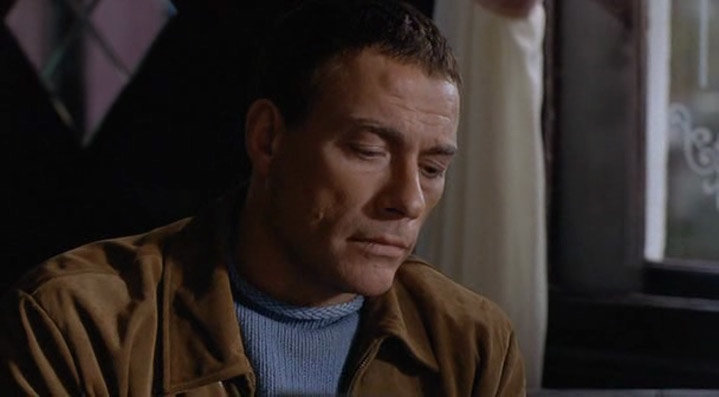 Conventional wisdom holds that audiences want from action stars the opposite of what they want from other actors; they want their action stars to be believably invulnerable as they want improbable vulnerability from their respectable actors, the definition of "good acting" being something about the revealing of character / performer through unexpected details and contrived candor. But what does that make of an action-star-inverse like Van Damme, who's at his most interesting when he's at his most vulnerable and who does not, unlike Stallone or Willis, wield that vulnerability as a weapon, but presents it as what it is—frailty?