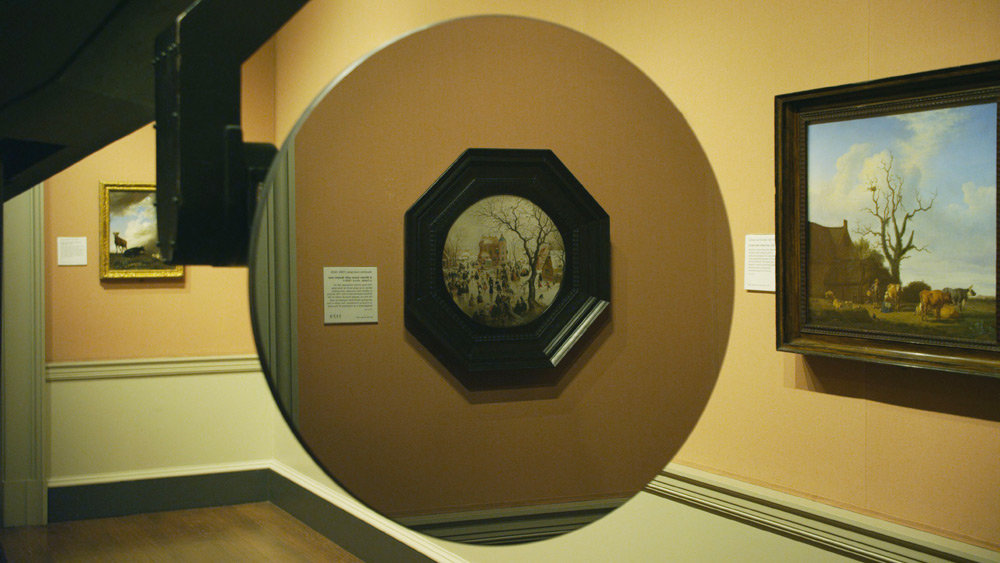 My natural predilection for optical tomfoolery and ominously hulking machinery in cinema may unduly bias me toward’s Mark Lewis’ short film Black Mirror at the National Gallery, but what can I say, it tricks the eye and looms with techno-cultural foreboding.  A bizarre, mostly-obscured composition begins the film, with a small art work tinily peaking out of the corner of the screen, and as the digital camera tracks back—which is all it will do for the next unbroken eight minutes—the black mass is revealed to be a huge, arm-like machine controlling the most magnificently lucid mirror I’ve ever seen, so lucid it could be a window to another world.

The camera shoots into the mirror, which is moved around by its robotic appendage so that paintings in the National Gallery in London that are not specifically in front of the camera—either off-screen behind the view point in a phantom space or awkwardly glimpsed at an angle from the side—are placed directly, falsely, in front of our vision.  Yet the camera never gets close enough to a painting for us to give it more than a passing glance–this isn’t about studying the art with impossible vision as much as it is about the optical contradictions, realities and illusions of the collage-like nature digital image, made up of pixels, images in images, like this mirror in a frame, and pictures in the mirror and outside it.  The screen is thus layered with unnatural spaces revealed, spaces filled with hints of deep culture, history and artistry, yet those spaces, seen through video, are as elusive as they were without the Mirror Overlord to guide our optical augmentation.

I fear there isn’t much structure to the movement of the camera or apparatus in the short, but the implications of eye-sight, machinery, digital and analog inputs and outputs were plenty to get my imagination, wonder and terror agitated—all the more so when the camera finally faces the mirror directly and we see no cameraman, no human at all, and realize we are watching the work of two machines, dancing on rails alone in a museum.