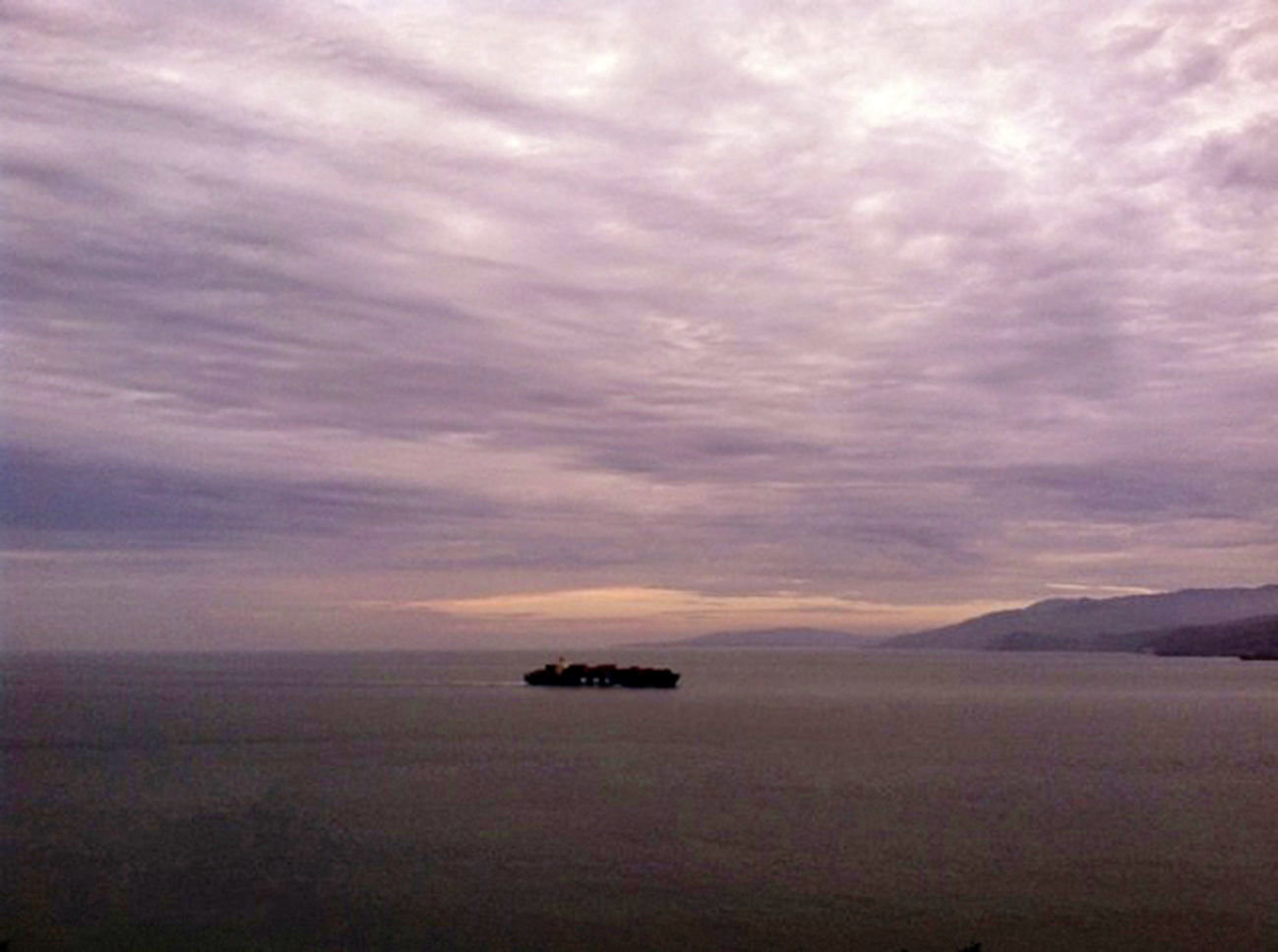 The Revolutions in 16mm series at the Viennale culminated early in the festival with a night dedicated to American poet filmmaker Nathaniel Dorsky, who premiered two new works, February and Avraham, as well as showed Summer and December for the first time since their debut last spring in San Francisco's Crossroads series.

Those familiar with Dorsky's films since his notable shift in style in the mid to late 2000s (most emblematically with 2006's Song and Solitude) know that describing his films and indeed even differentiating them is a challenge so counter-intuitive that its very difficulty points at what makes these films as silent encounters in dark rooms so precious. No doubt like many, I can certainly enumerate the plenteous and beloved revelations and motifs across the films of the artist's last two decades, including these new ones: clouded suns, foliage verdant and crepuscular, a San Francisco made of dancing, angling glass doors, shop windows, steam and shadow, layers of shapes and fabrics, grills and veils. It is a refined, reworked and re-discovered catalog of occluded reality and revealed visions crossing Yasujiro Ozu's variably charged and releasing "pillow shots" and the layers through which Josef von Sternberg views the emotions and interactions of the human world. (Ozu's own confusion, which father-daughter film is which, the English language Spring, Summer, Autumn, Late, End, Early, Afternoon titling, is a light, touching similarity as well.) It is particularly poignant that these new films are being projected at the Viennale alongside the John Ford retrospective, and pairing a Dorsky with a Ford certainly would result in a lucrative experience. Both artists have a preference for repose leading to a contraction (of emotion, of will), and from that intensification, that inward focus, an extension outward into action and expansion.

But this is true of nearly all of Dorsky's recent films, and of these new four as well, each so brimful with beauty, so nimble in thought, fragile in delicacy but agile in movement, that especially in experiencing more than one at a time they can become overwhelming. I am challenged to picture even one of his films as a complete whole rather than as an in-the-moment experience with resonant pulses or images that stay or fade with me. (The film of his I've seen the most, Saraband, I have a stronger memory-grip on.) I like to imagine his films whole like a necklace of gems, the 16mm reel a bejeweled strand run through the projector, resulting in a glittering light both evanescent and temporary. When asked after the screenings how he works, the director talked about shooting and then eliminating all that is bad, then all that is good, then all that is very good, and then all that is excellent; what remains is what he assembles, and the assemblies grow "like a crystal": a suggestion of fractal possibilities, organic development, and prismatic material. This highlights the difficult purity and strength, shot by shot, moment by moment, of Dorsky's work, in a medium so unlike poetry where you cannot go back to revisit something past, and to hold a vivid image of the whole in one's head after twenty or so minutes of immaculate, soulful splendor is, for me at least, impossible.

In many ways, rather than show four new works, I'd rather see one film four times, such is not only the richness of the individual experience, but such is an experience which makes me so clearly face my own limitations and inarticulations—in thought and word—after but a single screening. And so I always struggle to have something new to say about Dorsky's new work, even when, throughout the rest of the Vienna International Film Festival, with small clusters of friends it was always the evening with him and his work that came up again and again. So here, then, are spare notes of observations—and even these I can't guarantee that when I speak of one film what I really am remembering are echoes or senses of another. 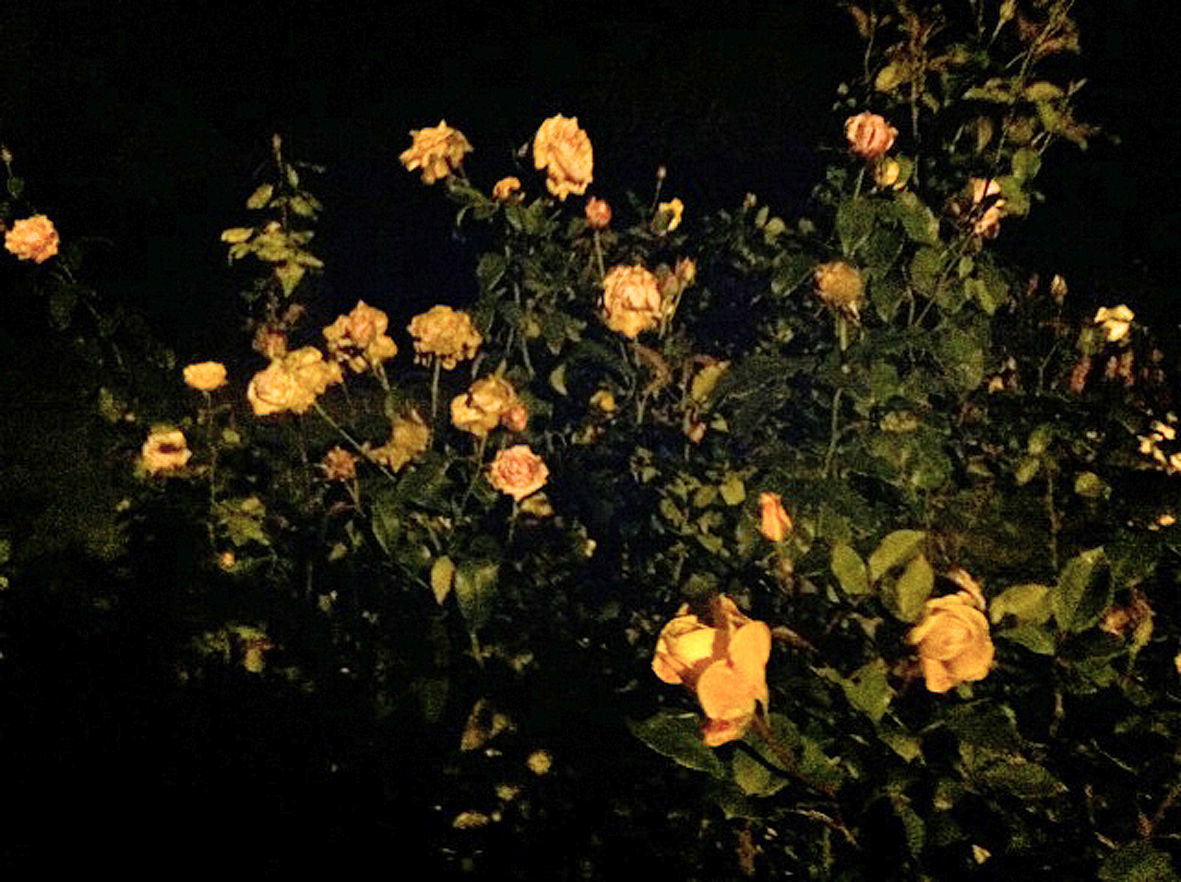 ﻿The program began with Summer, which itself began in a shot of at least four layers, a warbling reflective surface, that which lay on the surface, that which lay below, and that which was reflected. It is a fitting an opening for a film which pulsated inward and outward with densely muddied layers. It is a clenched film, furrowed, thinking hard somehow, full of active and thick images. So much so, in fact, that Dorsky's characteristic intuitively flowing editing here seems less fluid and provides a greater freedom between the images; the images themselves may be furrowed, the screen tickled by textures (including an extraordinary sequence of barely discerned clouds with a suffocated sun trying to bubble out like lava), but the connection between shot and shot has a greater, more open kind of psychic (to use Dorsky's often-used term) space. Another stand out image: a finger tracing something on glass reflecting the sky, a diagonal slice of billowing fabric to one side. A film of puce, the color of the dusk and nights in John Ford's final film 7 Women, there is some release: towards the end Summer literally alights with a gold-tinted time lapse reverie.

As with a few of the director's recent work, there are a number of shots here and in the other new films that are out of focus or that play with the aperture to adjust the amount of light "entering" a shot dynamically in the moment. (Calling to mind the shot in which John Ford makes the sun "rise" on Walter Brennan waiting for his death at the O.K. Corral﻿ in My Darling Clementin by having Joseph MacDonald open his camera's aperture.) Dorsky talked after about now consciously working in the last dying years of 16mm as a material and of desiring to explore all the ways to make a single shot look different. But for someone who finds the seemingly intuitive and spontaneous process by which this cinematography discovers things of such moving beauty, this in-camera play seems to reveal or expose the artist's search for something that is magical: we see not just the result but some of the practice (or at least a simulation of that pratice) that reveals the result.

December, one of my two favorites of the group, despite the speed in which Dorsky made it (purposely limiting himself to the month timeframe, and editing it in around ten days) and despite its gloomier colors, felt airier. It could be the greater amount of abstraction, images that don't even seem plastic at all, or it could be a greater unity in form and color, plenty of exclamatory red movements, diagonals, a more ochre-colored film. Aperture play includes making a glowing shot lose its luster only to gain it again, and like this clear "directedness," the film ends on a vision of the sun in which the camera's slow movement, its creeping change in the composition, of a giant red band moving ever closer to that small bright disk, seems very hands-on, very much a human connection between hand of filmmaker, camera in hand, camera and the world before it. 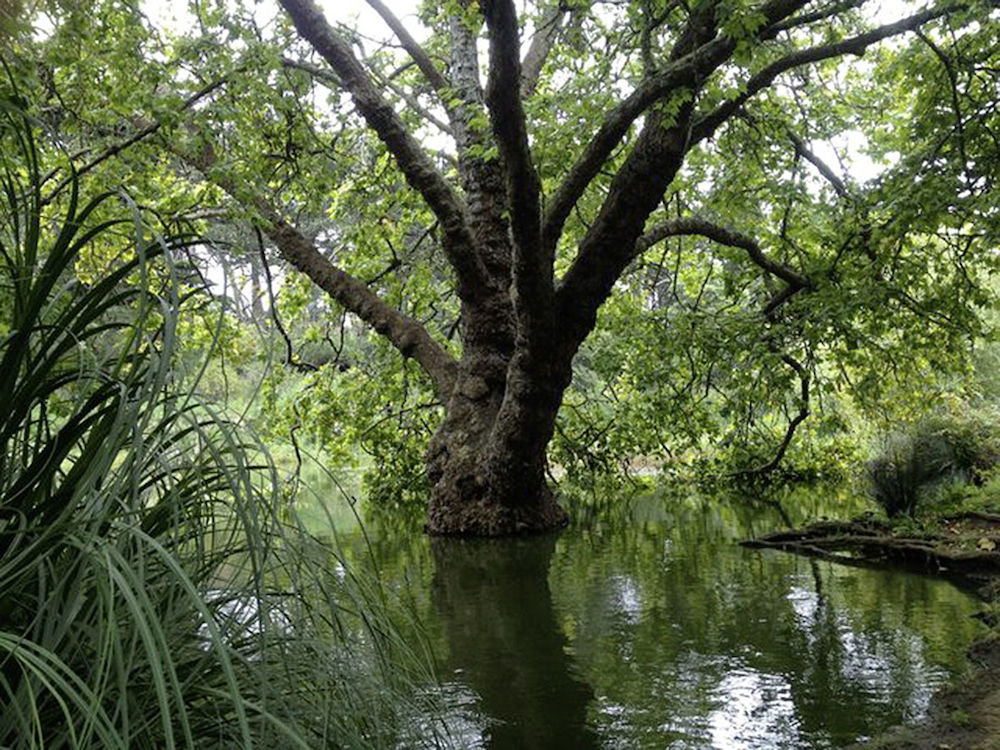 ﻿Avraham, my other favorite and the newest of the show, begins astoundingly, with shocking throbbing light as barely glimpsed clouds suddenly sear the eyes with glare, the revelation of light. What follows after this creation of the world from abstraction, from piercing luminosity, is a film of true softness, and appropriately wondrous especially when it comes upon light, such that even a pivotal shot of a diaper (!) animated by a park's wind and sun beams seems uncanny and alive. In its making Dorsky compared his approach to that of a bird that separates itself from a flock, finds a branch of its own, looks around at will, then moves on—all movements and perceptions involved mysterious and unexplainable, a bird's behavior the filmmaker said he found deeply compelling. Indeed, the film seems looser, a lightly stretched film, wide-spread, greatly variegated in textures and that unreal quality of the nearly blinding light. Airier and spread indeed until we find a tree in the park—which Marie-Pierre Duhamel has written on—whose unexpected gravity in a cinema so hovering, floating and unmoored, holds the film down, pins its ending to the earth. 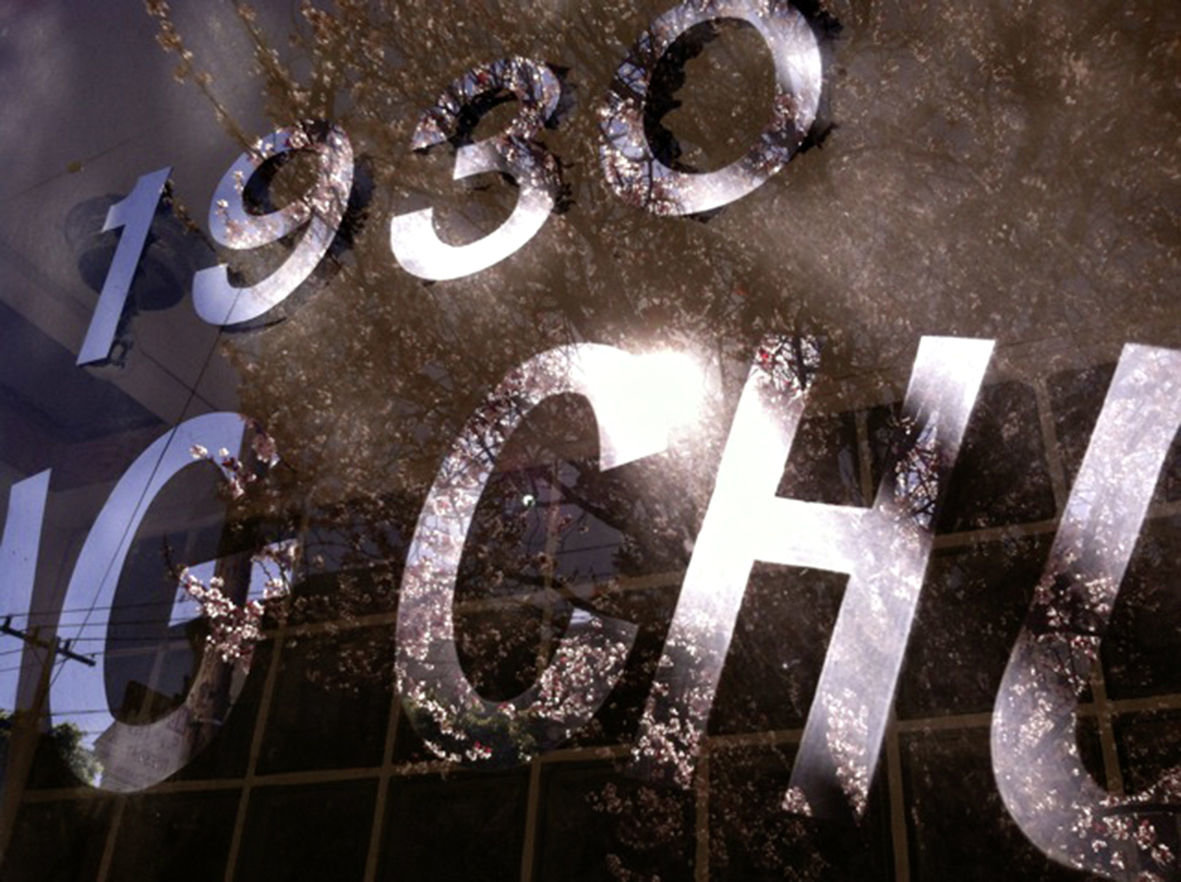 ﻿Finally, there's February, and as you can see my already inadequate report is growing briefer, my overall sense vaguer. This one begins with tendrils of spring—an architectonic shot of arcing plum blossoms and a stoic building edifice behind—before going dark, darker even than December, becoming bundled and chill, a true winter film. Or perhaps not winter but that sharp, dry coldness of Northern California nights, and so a nocturne, shrouded. Yet poised in title and in making at the cusp of spring promised at its beginning, there are intercessions of colors, of flowers. I don't recall how it ended; I believe somewhere near or at a throbbing lens flare that seemed an otherworldly Morse code of beaming crystalline messages—light as transient sculpture in the lens—flashed into the crisp scene, but by this point I was feeling whatever the cinema equivalent of museum exhaustion is, an overload on the senses and on the body.

Perhaps December's darkness, ending the sequence of films, was that of the time itself in the cinema, and the spring was the rising lights in the room, the movement from a space of darkness and private solitude to one of light and community. Even the light of the cinema can pale, sometimes—believe it or not!—to that dilating light that pours in upon stepping out into the world. After four such films leaving the theatre was a gasping shock: Dorsky's was a world I did not want to leave; yet moved to some kind of sensorial capacity, I indeed sought some other kind of immersion. Remaining after his films to discuss them generously and beautifully with the curators and the unusually inquisitive Viennale audience, the artist himself helped us move away from the world of the screen and transition into the world in which these films' unrivaled jewels of impressions can be found.