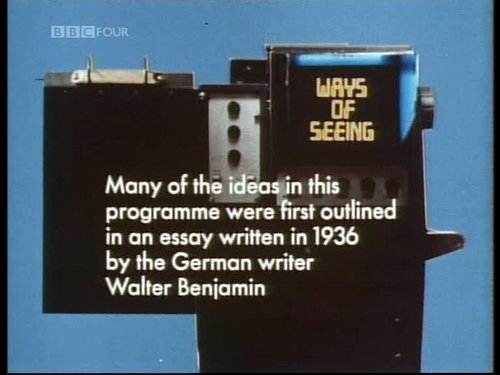 To profane a Botticelli with a knife is something likely to go down well even with the Windsor Knitting Club these days, less so forty years ago when John Berger literally did so on national television. Though staged for the benefit of an oblivious public, this iconoclastic gesture, accompanied by Berger’s declaration that “it is not so much the paintings themselves which I want to consider as the way we now see them,” your average prime time TV was not.

To celebrate the 40th anniversary of its original airing, the BFI is screening Berger’s seminal TV series Ways of Seeing, inaugurating “Broadcasting the Arts”, a new programme exploring the way(s) television has dealt with literature, music, theatre, dance and fine art. Judicious choice that of starting with this particular series—the focal point of this 1972 televisual experiment being that of investigating how the perception of images was changing at the hands of media technology.

Heavily influenced by Walter Benjamin’s The Work of Art in the Age of Mechanical Reproduction, Berger’s work focused on the reciprocal nature of vision at a time when images started coming to us as we stopped going to them. To see and be seen, to access visual culture as opposed to be enlightened by it—these were some of the concerns questioning “﻿the powers that see.”﻿

The cosy teapot of British criticism, up to that point hedged in by Sir Kenneth Clarke and his Civilization (1969), was suddenly cracked by a dialectic alternative. While Sir Clarke’s interpretation is informed by the inherent authority Art supposedly emanates, Berger’s art “no longer exists as it once did.” “Its authority is lost,” the British theorist enthuses, “in its place there is a language of images. What matters now is who uses that language for what purpose.”

A remarkable aspect of Ways of Seeing is the way in which the series pushed the limits of (visual) communication on both a theoretical and practical level. Against the patronizing tones of British TV and its uptight direction, the series adopted innovative editing techniques and invited spectators to be sceptical of what they were seeing by showing them how they were seeing. The camera zooms back unveiling the artifice of a set—instead of the image previously seen, now the agents, mechanical and human, that made that image visible lay bare in front of the spectator.

Without ever losing clarity or argumentative strength, Berger takes the public on a mutinous tour behind appearances where what had been previously considered “﻿immovable”﻿ is now open to interpretation. So a landscape is not a celebration of natural grace but that of its landowners' wealth. True to Benjamin’s thesis, the creators of the series constantly exposed the inner workings of the televisual machine with Brechtian disruptions and juxtapositions. Every assumption and consideration about art and its meaning is shown to be a cultural construct, the outcome of a complex process where political and economic forces are at play. Almost anachronistic—in the age of neo-liberal feminism with erotic capital as the emancipating tool of choice—is Berger's critique of female objectification. From the oil paintings of the European tradition to the urban canvas of advertising, the female body is something to look at, never to interact with, its languid poses always signaling unconditional attainability.

To watch this series today forces us to simultaneously confront shortcomings and far-sightedness in Berger’s cogitations about art and the way we experience it. Our visual currency has in fact exasperated availability and yet blatantly failed to provide multiple perspectives. Art did evacuate the ivory tower but its sacred aura lingers on. Even if the “﻿ecstasy of communication”﻿ (Baudrillard) has become a daily possibility through social media, our ways of seeing seem to remain of a rather limited kind. It is as if instead of many diverging eyes providing different interpretations, mass media manage to convey the dominant ideology via multiple receivers-broadcasters. Art in fact inhabits a contradictory grey area of widespread consumption on the one hand, but also of elitist monopoly on the other hand. Benjamin and Berger's auspice, that Art thanks to technological advancement would have lost its aura and “﻿fallen”﻿ in the hands of the people, has been simultaneously fulfilled and contradicted.

It is an interesting coincidence that the BFI screening of Ways of Seeing matches the opening of Damien Hirst retrospective at Tate Modern; in fact, the series’ most problematic and unresolved crux, that of the democratization of arts, finds in Hirst an (im)pertinent answer. For if it is true on the one hand that larger sections of the populations now consume Art, on the other hand it would be inaccurate to claim that its glamorous authority has faded.

Though visibly aged especially when measured against the cynical surveillance culture of today, Ways of Seeing remains a cogent invitation to look closer, beyond the surface. An invitation, one suspects, very much welcome at a time when our unstable gaze flounders through an ocean of images whose frantic fluxes hardly allow time for reflection. For meaning remains, as Berger remarked, something to be negotiated on one's own terms. 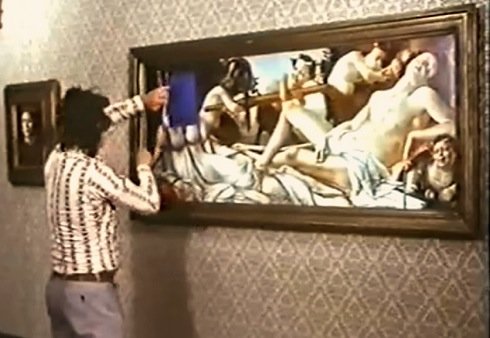 Celluloid Liberation Front is a multi-use(r) name, an "open reputation" informally adopted and shared by a desiring multitude of insurgent spect-actors, aesthetic dynamyters and random deviants. For reasons that remain unknown, the name was borrowed from a collective of anti-imperialist blind filmmakers from the Cayman Islands. @CLF_Project﻿