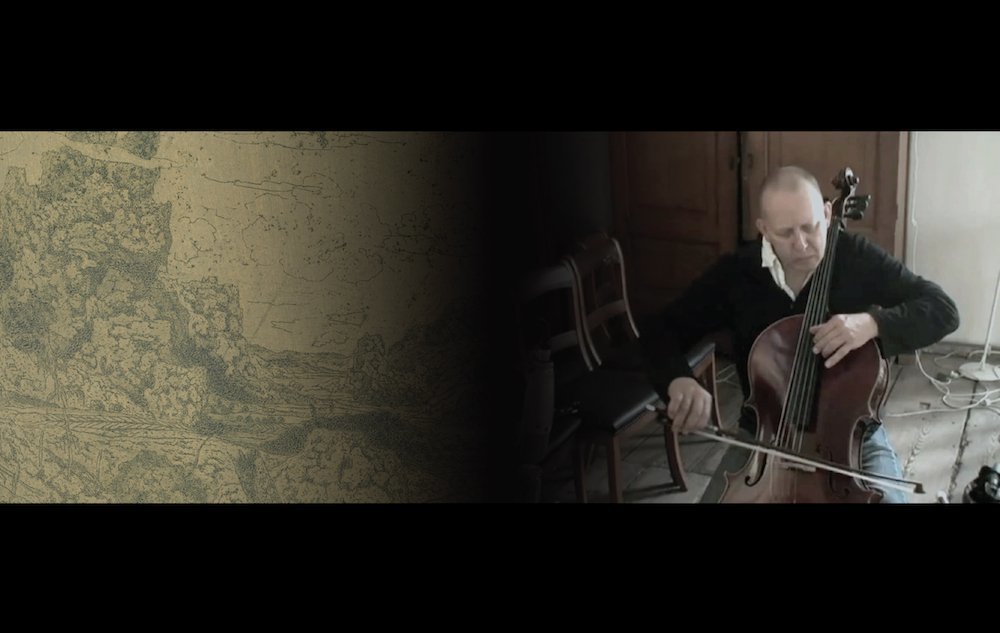 During a conversation held at the Brooklyn Academy of Music's Rose Theater in conjunction with the premier of Hearsay of the Soul, Werner Herzog's multichannel audio/visual installation at the 2012 Whitney Biennial, the director shared with the crowd an exchange between himself and the curators which concluded with the proclamation “I’m not an artist, I'm a soldier.” He would elaborate that the art world had become “excessive,” going so far to say “I don't go to museums because I don't like art.” Herzog has for years displayed a knack for such rhetoric that often comes off as equal parts blunt sincerity and self-aware myth-building. With Hearsay of the Soul, currently on view at the Getty Center in Los Angeles, Herzog is able to address the excesses of the art world directly.

Rather than creating a physical art object, Herzog has compiled a series of audio and visual signifiers that suggest a certain emotional through-line despite existing as projected light and sound—and as such have no real economic value outside of the commodification of the name “Werner Herzog.” He has then taken these signifiers and placed them in a museum that is quite literally a marble castle on top of a hill, creating an interesting conversation of conflict between ideology and location. This would be a conversation worth exploring further if it were not obvious from the formal content of the installation that Herzog's interests lie less in the conceptual and more in the conveyance of a mood, or perhaps even the pursuit of an “ecstatic truth”—which the filmmaker famously defined as a truth found through “fabrication, imagination and stylization.” 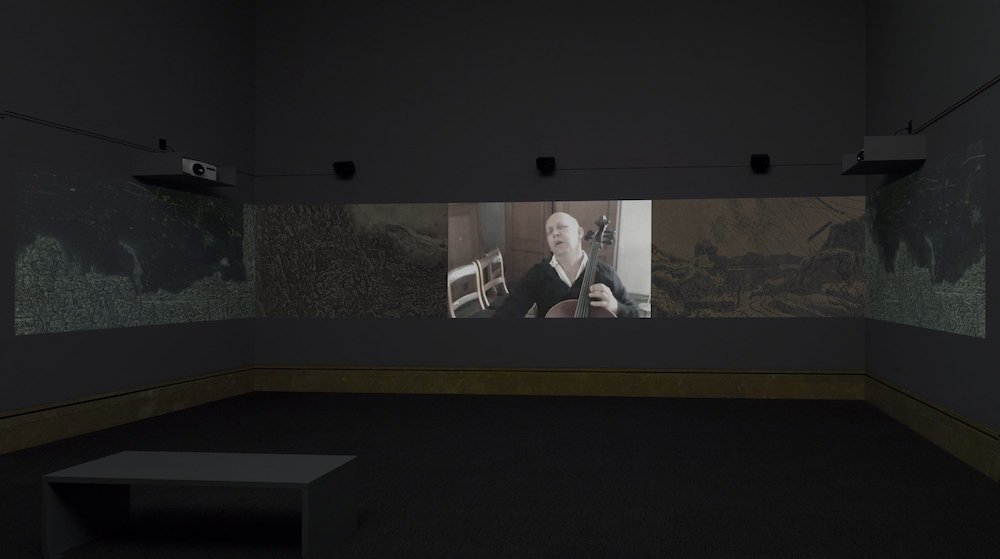 In a strictly formal sense, Hearsay of the Soul is separated into three distinct sections playing in succession to one another and spread across five screens. It is worth noting that a title card precedes the first section, implying a specific beginning, middle, and end. In doing this Herzog displays an apparent unwillingness to fully break from cinematic convention which here clashes with the conventions of time-based installation—the implication of which is that you may enter at any time within the duration, stay as long as you like, and then leave. Hearsay of the Soul requests not only rapt attention but also a linear viewing experience.

The visual content is comprised of a selection of landscape etchings by 17th century Dutch painter and printmaker Hercules Segers, while the audio is provided by contemporary composer, musician and recent Herzog collaborator Ernst Reijseger (Cave of Forgotten Dreams, My Son, My Son, What Have Ye Done?). Herzog here assumes the role of artist-as-curator, bringing the work of Segers and Reijseger together and allowing them to breathe in the same room until they find their points of intersection. This particular selection of Segers’s work often places perspective in a low valley flanked by distant rock formations, and as such guides your eye from one peak to the other, as if in a tracking shot. Seeking any sort of truth (ecstatic or otherwise) feels almost secondary to the mere visceral impact achieved in marrying the implied kinesis in Segers's still images with the jarring movements in a video of Reijseger's cello playing, itself a marriage of baroque instrumentation and avant-garde sensibilities. Coupled with the hand-held technique Herzog uses to capture Reijseger’s performance, it becomes evident that kinesis indeed forms the crux of the installation. Hearsay of the Soul is constantly introducing actual motion to a medium that is largely considered to be inert, or, in the case of music, intangible. The result alters the initial perceptions of the mediums. Segers's individual etchings are now appreciated not simply for their content, but also for they way in which they flow into one another from screen to screen. In doing this they cease to exist so much individual works, and instead become smaller components of a larger image stream—much like the individual shots that make up a montage. 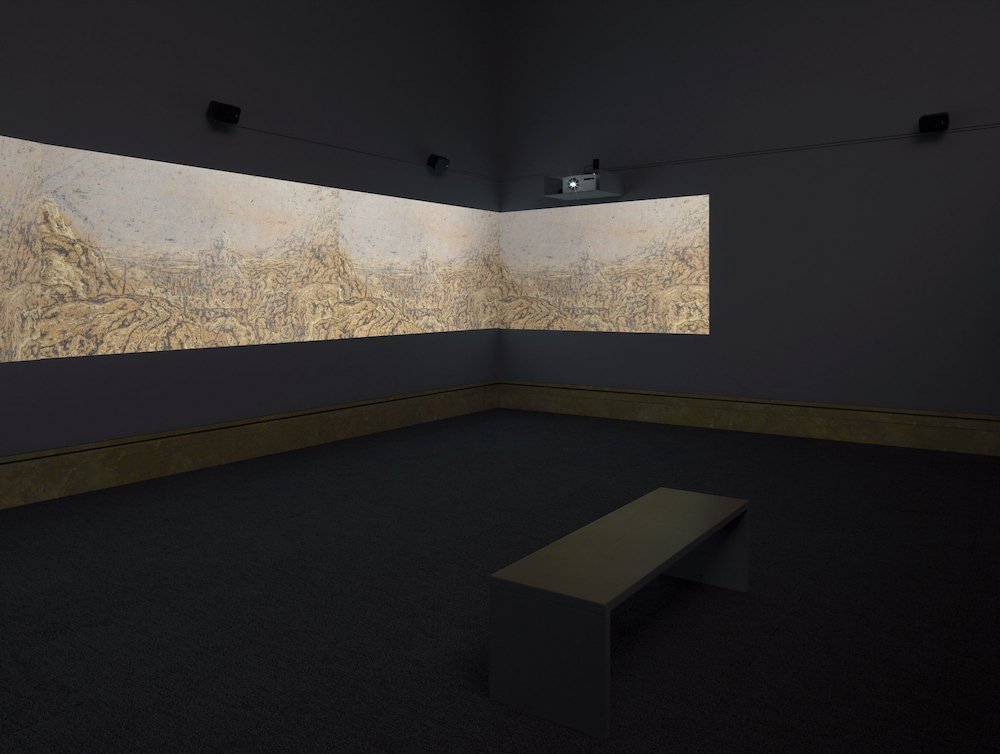 Allowing sound, image, and images of sound being created to speak to one another in the same space with very little interference from the artist places Hearsay of the Soul on the more modest end of Herzog's oeuvre. Yet it in this conversation between sound and image that it becomes evident that they agree often as they clash, and when presented with this incongruous sound and image, the awareness of the two as separate entities becomes all the more obvious. The viewer, then, in separating these two basic cinematic elements is able to grasp not only the full emotional tonality of their forced intersection, but also how the viewer relates to what is being presented.

It is then a simple parallel to draw between the etchings in the first segment of Hearsay of the Soul and the “embarrassed landscapes” that open Aguirre: the Wrath of God (1972), and in doing so it becomes possible to view Herzog through the lens of Segers. This in turn evokes a sense of violence in Segers's otherwise serene landscapes due to its association with Herzog's. Such a recontextualization frees the work of both of these artists from a specific definition and allows them to engage in an open dialog with the subjective relationship an audience may or may not have with these individual works prior to viewing Hearsay of the Soul. 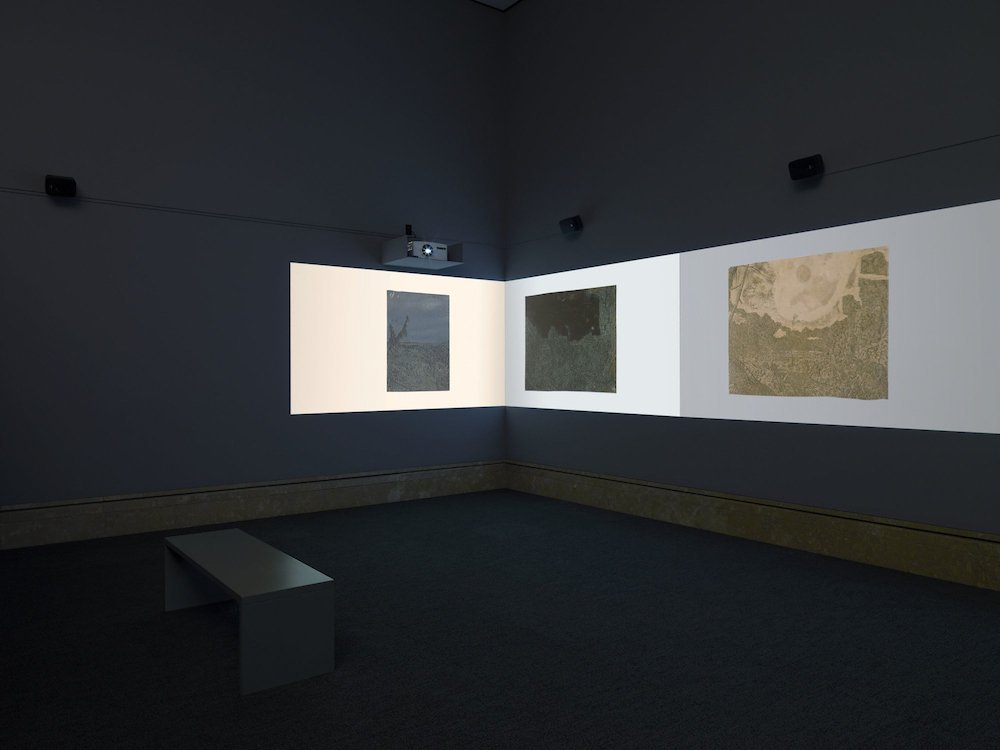 Furthermore, the scope of the piece (five screens playing simultaneously) in conjunction with the small size of the gallery creates a situation in which the viewer must situate his/herself rather close to the projected material. It therefore proves a physical impossibility to absorb all of the visual content at once, and the audience instead must become the editors of their own experience. Hearsay of the Soul thus succeeds as an environment in which one may seek their own truth. That is the true artistry of the piece, the bridging of a gap between over four hundred years of art making, spanning across several mediums (drawing, film/video, music) and allowing their histories to not only coexist, but also to re-contextualize, or as Herzog put it in his artist statement, “dance with” one another.﻿