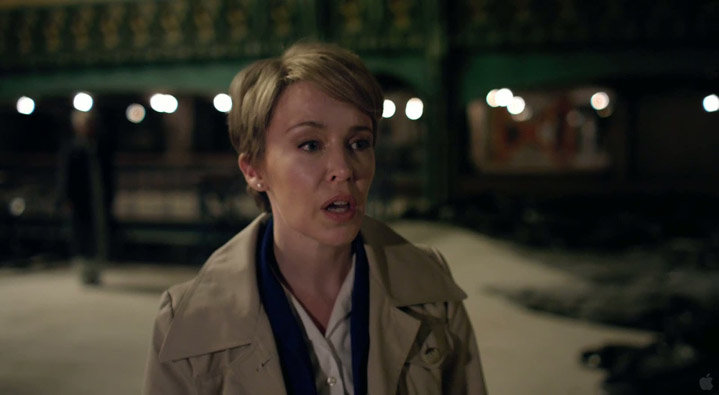 A bi-weekly look at issues in contemporary film culture and technology.﻿

In spite of its prestige pic credentials, Tom Hooper's Les Misérables﻿ is almost endearingly eccentric.  Almost. Shot from odd angles with distortive wide-angle lenses which often give the impression that space is warping and shifting around the characters, the film strikes an awkward balance between showy glitz and intentional roughness. Most importantly, there's the film's central gimmick: instead of lipsyncing, the leads performed most of their singing live on the set.

As gimmicks go, it's an interesting one; whether talking or singing, voices coming from moving or seated or costumed bodies sound nothing like voices recorded in a studio. The sound of "live" voices—﻿flat notes and all—﻿singing along to an off-screen orchestra mirrors the film's glamorous / scuzzy visual aesthetic.

It's a risky idea, and a lot of the time it doesn't quite gel. Russell Crowe, for instance, is vocally miscast; his part—﻿﻿antagonist Inspector Javert—﻿﻿is written for a bass-baritone, but Crowe has a thin, nasally tenor singing voice. The result is that Crowe appears stiff—﻿﻿﻿visibly straining to sing on key—﻿﻿﻿﻿and often sounds frankly awful.

While unheard of for a big-budget production, live-sung musical numbers are nothing new—﻿﻿﻿﻿and lately, they've become more and more common. The same device is used for Kylie Minogue's musical number in Holy Motors—﻿﻿﻿﻿and result is more effective than anything in Les Misérables﻿.

It's an interesting case of a technique becoming technologically outdated and then returning decades later as a deliberate stylistic device. ﻿The earliest musicals ﻿﻿﻿﻿﻿had their singing recorded live on the set, often with a live band off-screen; this is why, for instance, songs in the Ernst Lubitsch / Maurice Chevalier musicals are largely performed in single takes (Rouben Mamoulian's Chevalier-starring Love Me Tonight [1932]—﻿﻿﻿﻿﻿a Lubitsch pastiche which is actually better than any of Lubtisch's own musicals—﻿﻿﻿﻿﻿﻿uses a complicated combination of live and pre-recorded singing).

This early use of live singing was partly inspired by technical limitations; at the time, both synchronous sound recording and sound editing were young, clunky technologies. Still, there was an also understanding—﻿﻿﻿﻿﻿﻿﻿even as early as the 1920s—﻿﻿﻿﻿﻿﻿﻿that live sound and studio sound were as inherently different as location shooting (another once "outdated" staple of early filmmaking that made a comeback decades later) and studio production. For instance, Erich von Stroheim's planned talkie remake of Blind Husbands—﻿﻿﻿﻿﻿set to be produced in 1929—﻿﻿﻿﻿﻿was ﻿﻿﻿﻿derailed by the technical impossibility of recording all of the sound on location, as von Stroheim insisted; the example von Stroheim cited was that sleigh bells echoing over a lake—﻿﻿﻿﻿﻿something his script called for—﻿﻿﻿﻿﻿sounded ﻿nothing like their artificial foley effect equivalent.

The earliest Hollywood musicals are essentially standing-around-and-singing movies; as group choreography and big production numbers became an integral part of the genre, studio-recorded music became the norm. The musical grew into a deliberately artificial genre: dazzling sets and costumes, fantasy musical numbers, acrobatic dancing, and dubbed voices (in Hollywood and especially in Bollywood, these voices often didn't belong to the actors on-screen). The few exceptions—﻿such as Peter Bogdanovich's Cole Porter medley At Long Last Love (1975)—﻿﻿were more often than not intended as tributes to earlier film musical styles.

In the last decade, however, live-sung musical numbers have been cropping more and more. Nick Peterson's Yellow (2006), for instance, mines the live (and frequently off-key) singing of its non-professional cast to give its musical numbers home-made charm—﻿﻿﻿a sort of Lubitsch / Chevalier amateur showcase. Damien Chazelle's Guy and Madeline on a Park Bench (2009), while widely noted for his mixture of lush digitally-recorded orchestration and grainy 16mm images (another example of an "outdated technology" making a comeback), also features live on-camera singing and dancing. Both films are next-to-no-budget American indies, but what they have in common with the larger-budgeted Holy Motors—﻿﻿﻿﻿﻿and the much-much-larger-budgeted Les Misérables﻿—is that they use live-singing ﻿﻿﻿﻿to give their musical numbers a sense of emotional and physical authenticity.

In attempt to break the artificiality of an established technique, all four films revert, at least partly, to an earlier form. This sort of cycle recurs throughout film history: the re-appropriation of the static camera by experimental and later arthouse filmmakers; the return of location shooting; the revival of 16mm and Super 16mm as shooting formats in the late 2000s; the small, recent renaissance of productions shot in Academy Ratio (seen in two notable releases from this year: Wuthering Heights and Tabu). It's as though, in order to show their audiences something they haven't seen before, the filmmakers reach for something that isn't necessarily new—﻿﻿﻿﻿﻿just forgotten.﻿