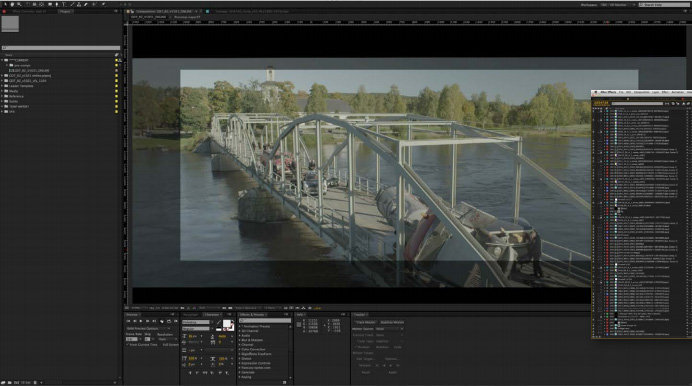 Above: A shot from David Fincher's The Girl with the Dragon Tattoo (2011) being re-framed in Adobe After Effects.

Workflow is, in short, a key part of the ongoing conversation—﻿﻿between filmmakers, studios, and filmmaking technology companies—﻿﻿about how movies can and should be made. The term—﻿which has its origins in software and business—﻿covers the process (or series of processes) a production uses to organize digital information and turn it into editable and then projectable material. ﻿

On a more philosophical level, "workflow" describes the relationship between production and post-production—﻿﻿shooting and editing. A workflow encompasses everything from the hard drives on which image data is recorded to the final delivery of the film for distribution. Workflow theories emphasize flexibility and maneuverability.

Whereas film stocks are prized for their distinctive characters, production-grade digital formats are prized for their range—﻿﻿﻿their ability to produce many different images from the same information. High-end cameras like the Red and the Arri Alexa don't capture images in the conventional sense; instead, they record massive amounts of visual data which can then be used to produce images.

Red's HDRx technology—﻿﻿used on its Epic-X and Scarlet-X models—﻿﻿﻿even goes so far as to produce two differently exposed video tracks from every shot. When blended together, they produce a composite image with a high dynamic range (HDR); this means that a dimly lit interior and a bright, sunny exterior can appear "properly exposed" in the same shot.

Digital imaging technicians (DITs)—﻿﻿the agents of workflow, in a sense—manage ﻿﻿image data and advise cameramen. Sometimes characterized as "digital film loaders," they are effectively post-production technicians working on set. A good workflow is one that allows data to move quickly from the camera to an editor's computer, effectively integrating post-production into a production environment. Michael Cioni﻿, a major figure in the workflow world, has gone so far as to predict that separate conventional post houses will become obsolete before the end of the decade.

Therefore, workflow—﻿as both an idea and an ideal—﻿extends beyond technology; it informs the way movies are made. Steven Soderbergh—himself something of a workflow guru—has repeatedly made the argument that his current style owes as much to digital workflow as it does to the distinctive aesthetics of digital imaging. I spoke with Soderbergh recently (the full interview will be published on this site), and he brought up a scene in his new film, Side Effects, which introduces the character played by Jude Law.

While Soderbergh’s earliest films were edited only after production had finished, the workflow of digital shooting allows for rough cuts to be completed in the middle of a shoot. As a result, Soderbergh realized that Law’s introductory scene was different tonally from the character’s scenes from later on in the film—a quality that wouldn’t have been noticed from watching disconnected dailies of the sequence. The scene was rewritten and reshot. Soderbergh described this process—where the line between decisions made in production and decisions made in editing is blurred—as “strategic reshooting.” 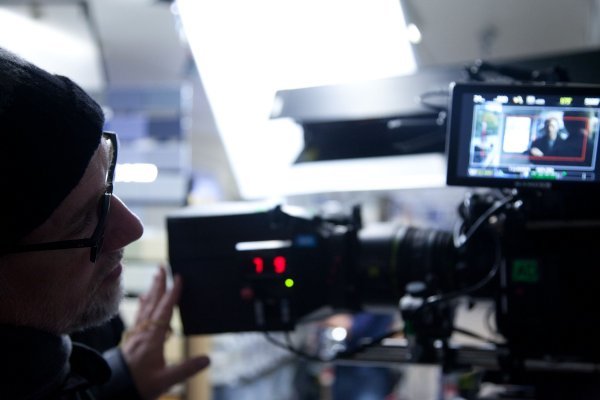 Above: David Fincher on set. The red rectangle on the monitor indicates the portion of the frame intended for use.

One of the biggest problems facing film criticism and film culture is that that there is often very little relationship between how movies are written about and how they’re actually made. Film is a medium that is inextricably linked to technology, but the language we use to talk about and evaluate films is by-and-large the language of antique or dying technologies or of environments (such as the old studio system, with its clear divisions of filmmaking labor) that no longer exist. While much of the old critical / cinephilic vocabulary—mise en scène﻿, montage, etc.—﻿﻿still works, it's often not enough.

It’s clear that the concept of workflow—﻿and the creative environment it allows—﻿is important. It's also clear that the switch to imaging and editing within a digital rather than a physical space has had a pronounced impact on film style. However, whether workflow is important to film culture—﻿that is, whether it's one of those things that we should be talking about but aren't—﻿﻿is an altogether different question.

Workflow is in many ways akin to the old film theory notion of decoupage—the relationship between scripted action and how the action is organized into shots and scenes—but unlike decoupage, workflow is rarely visible. It's difficult to quantify, because it describes a process rather than a result.

This is where things become complicated. Films are the results of processes; therefore they are, in part, records of the conditions and environments that produced them. A process, however invisible, can become a style.

Modern film styles are the products of workflows. David Fincher's The Girl with the Dragon Tattoo, for instance, was widely noted in the film tech sector for its innovative workflow. Footage was shot in 5K with a 2.1 aspect ratio but finished in 4k with a 2.4 aspect ratio. Only 70% of each shot frame was used in the finished film; this meant that Fincher could revise every shot—﻿reframing, altering the speed of camera movements, adding zooms—﻿﻿during editing without any loss of image quality. Again, the line between decisions made in production and those made in editing is blurred.

Workflow therefore plays a clear role in The Girl with the Dragon Tattoo's precise aesthetic; every shot has been revised to fit within the movie's visual and editing rhythms. Like Soderbergh's "strategic reshooting," it's a fairly clear-cut case of digital workflow serving as a tool of expression and authorship—﻿﻿﻿technology becoming technique.

By and large, film culture is built around a discussion of decisions that occur in physical spaces—﻿﻿﻿﻿directorial choices made on the set, editing choices made in the editing room, etc. As filmmaking shifts more and more into a digital space, talking about these decisions becomes more challenging. ﻿﻿﻿﻿﻿With a custom digital workflow like the one designed for The Girl with the Dragon Tattoo, it's hard to be certain whether, say, a shot was framed on the set or months later in a post-production suite.

What does this mean for critics, cinephiles, and other people who want to talk about movies? It's still possible to note The Girl with the Dragon Tattoo's mise en scène﻿ or Side Effects' narrative structure—﻿﻿﻿﻿﻿that hasn't changed. What has changed is the notion of environment and intent.

When I asked Soderbergh about how digital technology had affected his approach to directing, he responded:

I can tell you now that if I had this technology earlier in my career, the work would have been better. I would've been able to see my ideas quicker and been able to respond and make adjustments faster. [...] Now I'm cutting scenes the same night they were shot and I can go back and make adjustments or do the whole thing over again. The ability to error-correct quickly is so much more pronounced.﻿

The key idea—﻿﻿﻿﻿﻿﻿in both Soderbergh's narrative-structure-centric workflow, and in Fincher's visually-attuned one—﻿﻿﻿﻿﻿﻿﻿is "error correction." Digital workflow and non-linear editing allow for decisions to be motile, maneuverable—﻿cuts can be fine-tuned, shots can be re-framed, shaky camera movement can be smoothed out, exposures can be changed, anything can be recolored (REDCODE RAW—﻿﻿﻿﻿﻿﻿﻿﻿the format both Side Effects and The Girl with the Dragon Tattoo were shot in—﻿﻿﻿﻿﻿﻿﻿﻿﻿doesn't even store color temperature as a permanent value; is exists only as editable metadata).

Workflow as a concept is fairly easy to use in critical context, even for pre-digital films. For instance, part of what makes Jean Rouch's major documentaries so distinctive—﻿﻿﻿﻿﻿﻿﻿﻿﻿﻿that is, the way they integrate their subjects into the process—﻿﻿﻿﻿﻿﻿﻿﻿﻿﻿﻿could be described in terms of workflow. But workflow as a technology and an environment is harder to get a critical grasp on.

Workflow-related processes like HDRx upset old orders; what happens to the idea of the shot when the shot no longer has integrity—﻿﻿﻿﻿﻿﻿﻿﻿﻿﻿﻿﻿that is, when an image doesn't represent a record of something but is instead a seamless composite of two sets of digital data? The only way to build a critical framework for workflow, it seems, is to exercise doubt while also assuming that everything has the potential for authorship and intent.