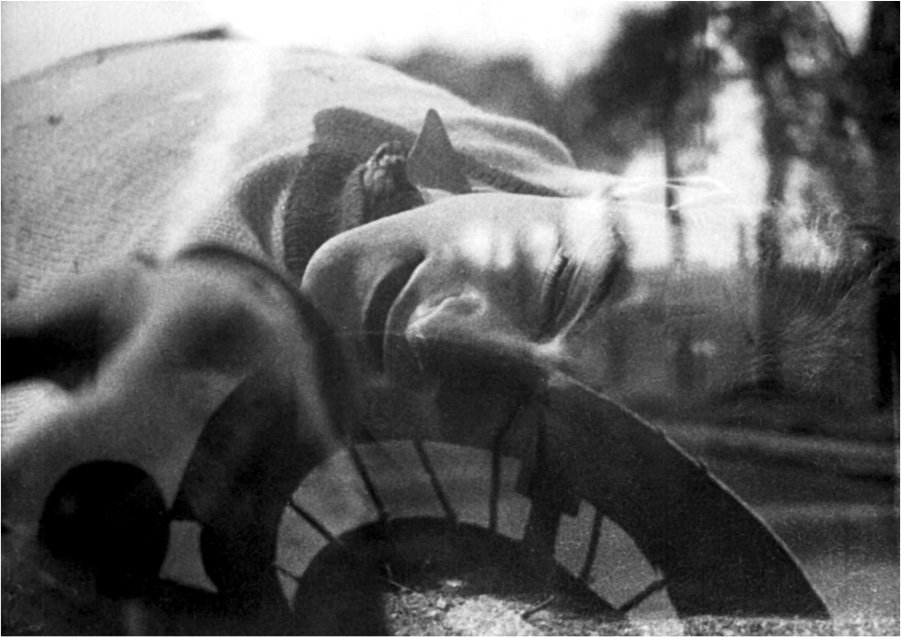 "Supersaturation freezes the crystal in an instant. So it is with the drama, like the egg at the fingertips of the naked magician, come out of nothing, of everywhere. All around, characters and actions submissively fall into order. Toward the future lies a false track which in its turn will undergo the surprising intersection with the absolute. Toward the past, the idyll, read backwards, is tragedy. The episodes each find their place, in order, deduced, bound together, comprehensible, understood. Exactly – the actors intimate – that’s why we were there. As in the beautiful syntax of a latin sentence, from the final verb, you come back to the subject."

Motion pictures have the power to render death as a conscious state. And words like “transcendentalism” barely scratch the surface here. A more apposite term—the one Jean Epstein nuanced in his film theory, “photogenie” (“created by light”)—brings ethics into play. Not to mention a wealth of correlatives, often unsettling, even gruesome. That is, Epstein’s cinema was born amidst the one-armed poets, battle-scarred dreamers, mystics and cinephiles of post-World War I France. So his aesthetic vision was etched not by the spiritual demise of nineteenth-century ideals alone, but also by vast wreckage staring him in the face. The French called them “les gueules cassees” (“the broken mugs”). A suddenly passé mysticism fell away like cobwebs, as the shrapnel in Apollinaire’s temple became far more meaningful than Keats’ half-assed love affair with “easeful death.”

Unlike subsequent generations, the Romantics were not living in the fourth dimension. Cinema, as anyone knew or would know it, had not yet been invented. The antecedents did not exist. Consequently, no medium of expression predating cinema could have wrenched audiences out of linear time as thoroughly as Jean Epstein’s La glace à trois faces﻿ (1927).

We’re given such spare language, such brutal shifts in POV that the film’s storyline (horizontal axis) is continually pierced. Close-ups disrupt the plot with vertical thrusts, each intersection confounding narrative’s forward momentum. “The present is nothing more than this instantaneous and incessant molt,” writes Epstein—whose protagonist, an overly coifed, though beautiful man, repellant for his cruelty, lies dead on the roadside. His sudden (synchronous) death not only resolves the film’s fragmented mini-narratives, it summons the filmmaker’s “photogenie” in the form of absence by allowing for a kind of escape. Or again, as Epstein puts it: “I think and therefore I was.”

The close-ups are almost hostile in their shimmering quietude. So freestanding as to suggest that a sensual obsession with light may betray something else: an equal and opposite mania for syntax, formal perfection, death itself, academism. But then La glace à trois faces﻿ realizes impossible stillness in ways that defy critical reservations. As the titular looking glass swallows three versions of its lothario-host, returning each of his images to a different lover, he twinkles and vanishes. Dissolving into that inner arrangement of light and shadow to be recycled at some later time, coaxed by Jean Epstein into multi-dimensional Bunraku figures on celluloid.﻿ It's easier to imagine the maestro's hands bending the invisible beams of a Theremin-like device above the set than crouched behind the camera like a hidden beast, occasionally barking orders to someone wielding a Klieg light. Cause and effect are suddenly… well, if not irrelevant, then reborn as manifest visual logic—with the occasional flirtatious nod to normative storytelling. Who remembers the damn story when Mr. Epstein commences to leap from a silvery sea to some enormous hand, strumming guitar in slow motion? Or when his necromancy evokes the atmosphere of Edgar Allan Poe, whose characters are gossamer creatures, “only slightly dead.” 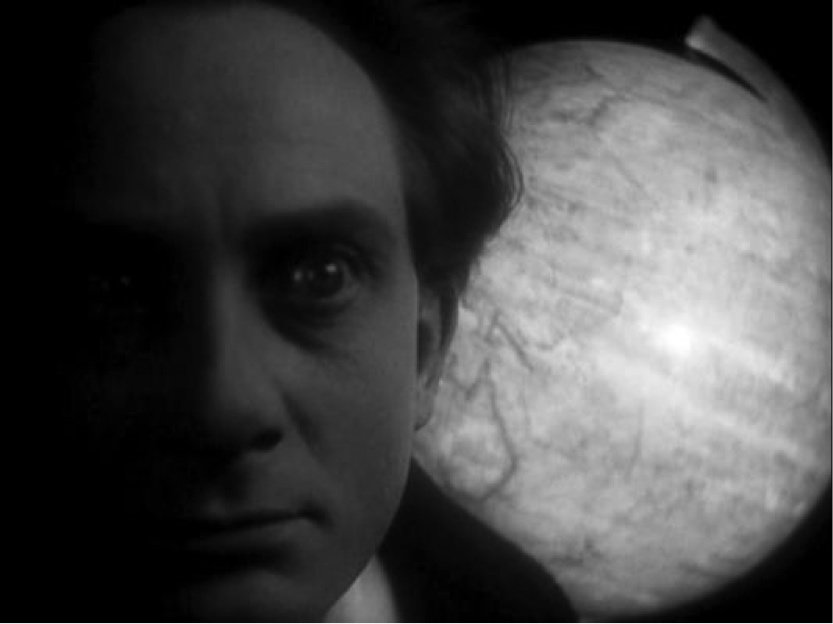 In The Fall of the House of Usher (1928), dramaturgy becomes séance.

Whereas Epstein’s leading man in La glace à trois faces﻿ resembles a cryonically frozen ferret, his hero in this film cannot be characterized. Far from blank, his face is haunted exclusively by those emotions never granted names. Thanks in large measure to the evanescent (and, according to Epstein’s view, in no way macabre) air snatched from Poe. Something rarefied, an adaptation built on ether with set designs keyed to non-corporeal forms. Roderick Usher is an idea: half-painter, half spirit-medium, both addled and both seeking Madeline. The unacceptable loss of his “other half” gnaws at the now febrile, now despairing heart of this dream imbroglio. Featuring spooked eyes that shoot an intense yet mournful incandescence into the world.

Virtually every POV belongs to the protagonist, even before he’s introduced. It’s a panicky moment indeed when we realize that we’re looking through the jellied orbs of a disembodied presence. Vast (vast!) interiors grow more expansive than the landscape surrounding Castle Usher. Tormented trees scratch at the sky. Fornicating toads guard Madeline’s tomb, an owl dematerializes. And Roderick’s outsized perceptual apparatus can’t help reading Truth in these things—even the wind is incantatory, ringing like mystic speech to him. He’s the catalyst of Epstein’s high-speed camera, which evinces a mercurial and unsettling grammar, neither easily digestible nor wholly devoid of narrative lingo: we experience what happens when cinema gives up the ghost. When time “escapes the chronometer,” as Epstein puts it.

For him, the relationship between life and death is membranous.

All’s revealed in “this transparency of the tombs.” 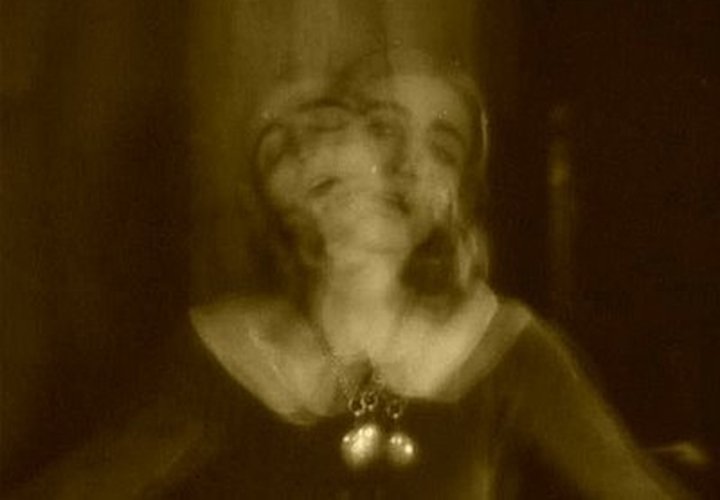 His lens pursues its own weightless agenda (combining the technical exactitude of the young medical student he once was with the cinepoet he now is), no less than a spiritual safari to “capture the human angel.” The same surprising comminglings of science and mysticism appear in The Creator, a 1920 novella by Mynona, in which the great truth crushing human society is its lack of visionary wisdom. The post-WWI period finds myriad ways to illustrate our alienation from the angelic “Truth” supposedly within us, problems of mysticism solved by technology. The Surrealists would mine this idea endlessly. But as modernists dig in their heels, issues of moment such as self-fragmentation come to have no transit with divine beings and soul-quests. These increasingly hollowed out visions come into their own. They dominate our universe.

Sometimes transcendentalism gives up the ghost, too. Nullity, in all its guises, has a definite place in Jean Epstein’s film grammar, which can be said to redefine form as a kind of... zilch. An idea borrowed, even if unconsciously, from Mondrian paintings. And the proposition, for all we know is reversible: a world might suddenly come into being ex nihilo, no bang required, based on mutually opposing vertical and horizontal axes. Distinct contours go poof in a cinema of vibrations yielding—would it be too tacky to say “the Infinite”?﻿

Christophe Wall-Romana's Jean Epstein: Corporeal Cinema and Film Philosophy was used as a resource for this article.﻿ Special thanks to Jennifer Matsui, David Cairns, and Tom Sutpen﻿. ﻿