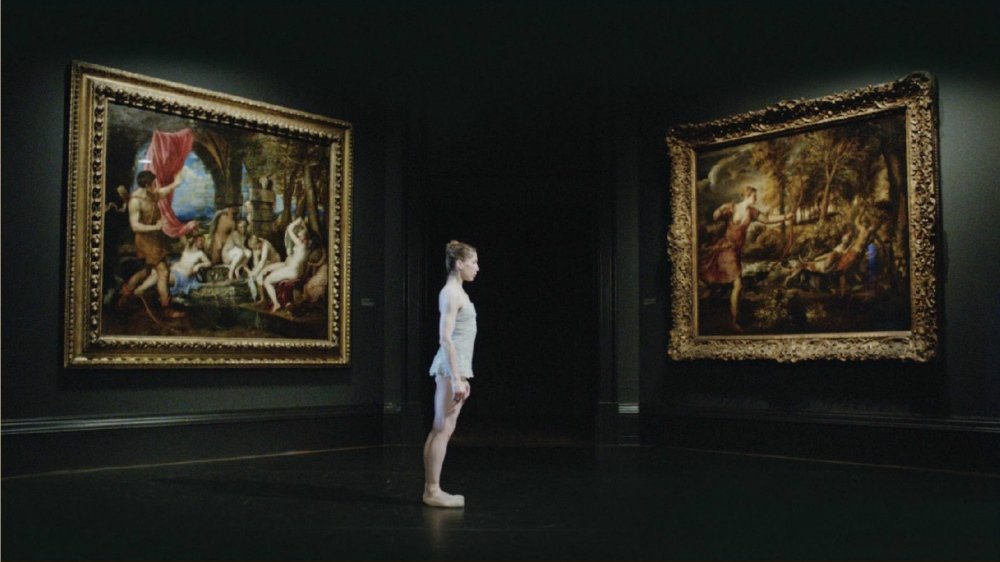 At a brisk 180 minutes, National Gallery is hardly one of Frederick Wiseman’s documentary marathons, but it still brims with ideas. After the classrooms in At Berkeley (2013), here the incredibly spritely octogenarian filmmaker focuses on the halls of the National Gallery in London, and contemplates ways of looking, storytelling, and, through this, the nature of cinema itself.

While, as always, the structuring device of the film is the institution of the museum, here Wiseman feels more playfully direct in his editing process—though never didactic. In shooting details of paintings, cutting between oil painted visages and the flesh one of the guests, and capturing the gallery’s gesticulating guides, Wiseman points the audience time and again to the different ways we perceive the world, be in through art, film, poetry or dance.

NOTEBOOK: It’s been almost exactly one year since we last spoke. How were the past 12 months?

FREDERICK WISEMAN: Good! I was busy. Right after TIFF last year I started National Gallery. I had done some work on it before, but I worked on it quite intensely until I finished it in March.

NOTEBOOK: And you were recently in Venice getting a lifetime achievement award.

WISEMAN: Yes, I had no objection to that. It was extremely nice, both for me and for documentary, because it was the first time they had given the award to a documentary filmmaker.

NOTEBOOK: Can you talk more about that; how you see the position of documentary shifting in the current film landscape?

WISEMAN: It’s hard for me to do that, because one, I don’t see many movies of any sort, and two, I’m pretty isolated from the scene. So I’m not very good at cultural generalizations. It’s more that I’m told something’s the case, rather than know it from my own experience, meaning I’m reluctant to comment.

NOTEBOOK: I’m always intrigued by what filmmakers say they do and do not see when it comes to current cinema.

WISEMAN: For me it’s a question of time. I work a lot. I don’t want to go to the movies after looking at a screen all day. I like to read. I like to go to theatre. It’s not that I’m not interested in film, it’s just there’s no time.

NOTEBOOK: This kind of approach to life also makes for a richer world experience, I think.

WISEMAN: Exactly. As good as some movies can be, there’s also a lot of bad ones.

NOTEBOOK: How do approach transitioning between your projects? As you said, there was very little time between At Berkeley and National Gallery.

WISEMAN: I don’t. I just do whatever interests me in the moment. I don’t worry about, “Oh, I did a university, so I have to do something different than that.” I always wanted to do an art gallery and the opportunity presented itself. A lot of it is chance. I sort of have a master list of films I want to do, but it comes down to where my interests shift in a given moment, to what I get permission for. In terms of National Gallery, the opportunity came up because I was skiing in Switzerland and a good friend of mine who worked at the National Gallery was there. She asked, “Have you ever thought about doing a museum?” I said: “Yeah.” She said: “What about the National Gallery.” I said: “I’ll start tomorrow!” A couple weeks later, I went to London and spoke to the gallery director and he said okay.

NOTEBOOK: Can I ask what else is on your master list?

WISEMAN: You can ask, but I’m not going to answer.

WISEMAN: Not quite. I always have in mind two or three subjects. For example, I was sitting in my dentist’s office one day, which is the only place I read People magazine, and there was an article about a model agency. So I called up a couple agencies and that’s how I happened to make Model. So thank you dentist. The one thing I can thank him for.

NOTEBOOK: I wanted to ask about the rapid-fire editing montage of paintings at the beginning of National Gallery, as it made me wonder about how you choose to approach framing the artwork in the Gallery.

NOTEBOOK: And that’s an interesting choice as that’s not something the human eye can naturally do.

WISEMAN: Yes, exactly. The eye doesn’t have a zoom lens. I’m looking at you now, but I’m seeing the bar, the people sitting at a table over there.

NOTEBOOK: And this then draws attention to the different ways of looking.

NOTEBOOK: The guides also reference film frequently. Were you hoping to intentionally draw attention to the medium?

WISEMAN: I didn’t know any of that would happen. But in the editing—of course!

NOTEBOOK: As someone with a very limited knowledge of art history, I’m curious to know what kind of prep work you did in terms of this subject matter.

WISEMAN: I don’t have a Masters, but I’ve been going to museums for years. But I really didn’t do anything differently than I did for my other films—I spent a day in the National Gallery. I’d been there as a tourist many times over the year, but in terms of preparation I spent a day there and the shooting is the research. Even if you spend a lot of time in a place, you never know what’s going to happen. I just try to get a sense of the routine of the place, accumulate a lot footage—in the case of National Gallery it was 170 hours.

NOTEBOOK: Yet the pull in the film is to Reubens’ “Samson and Delilah.” We keep returning to that painting.

WISEMAN: In the end, it came down to what was said about “Samson and Delilah.” The first time that guide talked about it she was very knowledgeable. Then a curator talked about it from a completely different perspective; the perspective of light. All of these sequences are a combination of luck, recognizing what you get and using it.

NOTEBOOK: Something that resonated with me on a very humanist level was the shots of the paintings and then the visitors staring back at them. Can you talk about that choice?

NOTEBOOK: The artworks are also brought to life, especially in the scene where we see Medusa’s head in Luca Giordano’s “Perseus Turning Phineas and His Followers to Stone” as a pianist plays serenely in a wing in the gallery. The juxtaposition seems intentionally comic.

WISEMAN: That’s just what I was trying to do. All the paintings that you see in that room are there and would be artwork that people sitting in the concert could look at. And, of course, these artworks represent some funny and horrible parts of human existence. I hope in the selection of the paintings and the way they are shot that you’re seeing some of the major aspects of human experience: love, death, war, religious persecution, religious orthodoxy—

NOTEBOOK: And sex. Lots of sex and flesh.

NOTEBOOK: Another moving moment is the art appreciation class for the blind. When did you decide to include that in the film?

WISEMAN: I frequently check the education departments [of institutions I’m researching] and they informed me of tours for blind people. But that’s a very important scene in the movie and I use it early on intentionally. It sets up something I think everyone tries to do in movies: the relationship between the literal and the abstract. Literally that’s the scene that says: “The National Gallery has a program for blind people.” Which is very nice. But the abstract is that it raises the whole question of seeing, and how you see, and the different between sight and touch. And since painting is about looking and the use of the eye, the scene is a statement about the major theme of the movie. When a film of mine works—or when any film works—it’s because there’s a relationship between the literal and the abstract.

NOTEBOOK: Given the focus in the film on the guides, did you ever see yourself in a similar role?

WISEMAN: An editor is always a guide. I’m not as explicit as they are; or I hope not. They’re didactic. They’re explaining. My goal is different: I’m trying to make a dramatic narrative movie and not explain in a literal sense how a museum runs. That’s the literal/abstract thing again.

NOTEBOOK: I don’t really believe in high and low culture, but we see these conversations among the museum’s administration, especially between the director and the head of marketing.

WISEMAN: I see both sides to this argument, and I suppose if I had to choose a side, I’d side with the director. His attitude was he’d rather have a spectacular failure than a mediocre success. I admire that. I like the idea of trying something. That’s what I try to do all the time.

NOTEBOOK: These conversations also raise the question of defining success, and how it’s often done on financial terms.

WISEMAN: Or popular terms. People have different interests and intelligence levels. If you start wanting to reach the widest possible audience you get pulled into that traditional Hollywood crap or diluting the material to reach the “great unwashed.” It’s ultimately very condescending. You can’t really do that with paintings; you can’t change the paintings. But it happens all the time in movies.

NOTEBOOK: What are you working on now?

WISEMAN: It’s already shot. But I won’t tell you about it.

READON: God, you won’t tell me about your master list, you’re next project!

WISEMAN: One thing I will tell you is I received a small grant to do a dance adaptation of Titicut Follies with James Sewell’s company in Minneapolis.

NOTEBOOK: That reminds me: you ended National Gallery with a dance sequence, as you also did with At Berkeley.

WISEMAN: It was just chance that Wayne MacGregor, the chorographer in La Danse, was in London working on chorography around one of the paintings in National Gallery. I was just there when he did it.

NOTEBOOK: Yes, but you intentionally put it at the end again.

WISEMAN: [laughs] Yes. I did. You noticed that.

NOTEBOOK: I’ll check to see if you do it again next year, too.