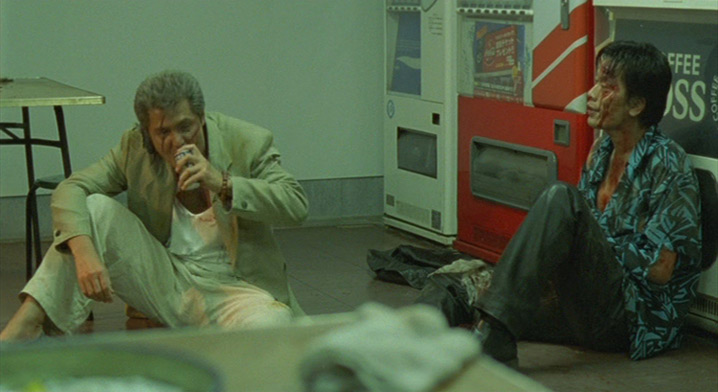 Perhaps it’s best to start at the end. After a perfunctory showdown (a two-on-two variation on the end of Dead or Alive [Takashi Miike, 1999]) in which the film’s antiheroes appear to be killed, Deadly Outlaw: Rekka (Miike, 2002) returns to the serene pagoda first seen at the start of the film. An old yakuza sitting meditatively addresses the camera: “Death is just part of one man’s training.” Another old man (Yuya Uchida) killed at the beginning of the film materializes, Yoda-style, and shouts in English, “Rock and roll!” The screen goes black, and the first minute of a song by Uchida’s band, Flower Travellin’ Band, plays. As it continues, Miike inserts what looks like outtake footage of the lead actors hanging out. One shot, moving in its implied intimacy, shows Miike regulars Riki Takeuchi and Kenichi Endo buying coffee from a vending machine.

It’s a moment that exists outside the narrative, a loving appreciation of the actors as people rather than as characters. It’s one of the most up-front professions to date of Miike’s particular love of performers...and it bears a striking resemblance to the end of Taste of Cherry (Abbas Kiarostami, 1997). The similarity may be inadvertent, but in both cases one comes away with a feeling that real life is always more beautiful—more spontaneous and deeply felt—than movies. If Kiarostami expresses this by leaving out certain fictional details in deference to real life, Miike generally takes the opposite approach, imaging details so preposterous they don’t impinge on the dignity of living.

Deadly Outlaw: Rekka may climax with the main character trumping a gunfight with a missile launcher, but it’s grounded in reality in unexpected ways. In an interview included on the U.S. DVD, Miike explains that the film’s writer, Shigenori Takechi, and producer, Tsuneo Seto, had both been yakuza before going into the movies. “It was not a typical production,” he says, noting that they did business differently than anyone he’d met in the film business. He came to admire them, however, and the film’s larger-than-life characterizations of yakuza can be regarded as an admiring gesture. So, too, can the documentary coda, which asks us to disregard which yakuza live and who die and celebrate the personalities of them all. 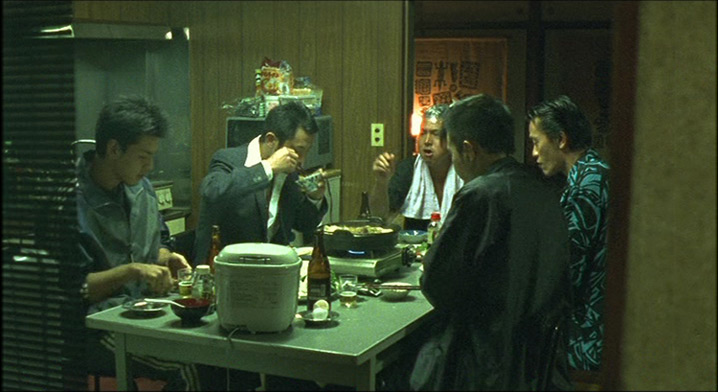 Miike’s fascination with personality can overwhelm the dramatic momentum of a given scene (and in Deadly Outlaw: Rekka, this happens fairly often), but it reflects a noble lineage. Miike learned filmmaking by attending the school of New Wave pioneer Shohei Imamura, who in turn got his start as an assistant to Yasujiro Ozu. It’s a loose genealogy, held together by a slightly removed, unassuming relationship to human interaction. For all his destabilizing tactics, Miike shoots most dramatic scenes at a gracious distance that preserves the integrity of traditions and personal bonds. This is especially true during the middle section of Deadly Outlaw: Rekka, which concerns Takeuchi’s Arata’s uneasy stay with his yakuza family

These scenes of family dynamics and reunited friendships are sympathetic in their precise detail, not unlike one of Ozu’s shimingeki shomengeki. But by devoting so much time to the personal, often mundane relationships between yakuza, Miike achieves something like Scorsese’s revelation in GoodFellas (1990) or Kinji Fukasaku’s in Graveyard of Honor (1975): that the irony of organized crime is that it does not exist outside lawful society but survives by fiercely imitating it. When two older members of the Otaki gang talk about what to do about Arata—a reckless hothead who’s about to take charge of the rival Kunisanda family—they take a somber, deeply embarrassed tone reminiscent of Ozu’s (or Scorsese’s) duty-bound parents. 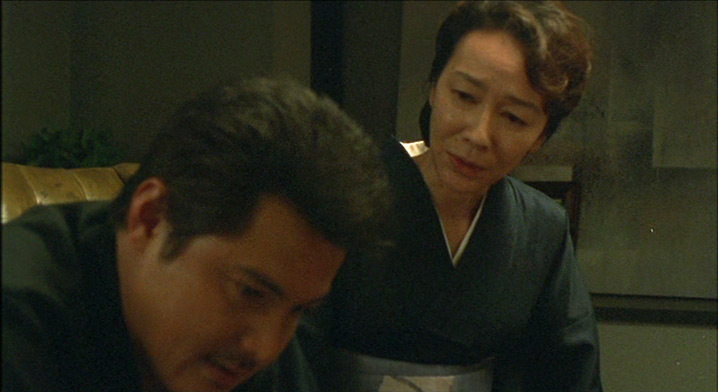 What to do about Arata? He’s about to come to power and he’s impulsively violent, probably bent on revenge since his father (Uchida) was killed. Even his mother is ashamed by him. (“I never raised you to be so unreasonable,” she says, crying, at a moment of unexpected pathos.) Other family try to calm him down before he upsets the order among Tokyo yakuza, with one “uncle” telling him simply, “Cherish your life.” But the Otaki clan (and, presumably, the Bando , the film’s other major syndicate) regard him as a force of nature to be kept at bay. There are intimations in their words that chaos may be inevitable in life, just like family or business—an idea explored further in Izo (2004), which Takechi also wrote. In that film, Miike would depict violence so relentlessly as to seem punishing; in Deadly Outlaw: Rekka, however, it is still enormously entertaining to watch. But the philosophical musings bring an existential layer to several major action scenes (the Otaki head's assassination, an attempted ambush of Arata on a country road). Transpiring in blankly stationary single takes, the violence here registers foremost as activity, the narrative context only catching up later. 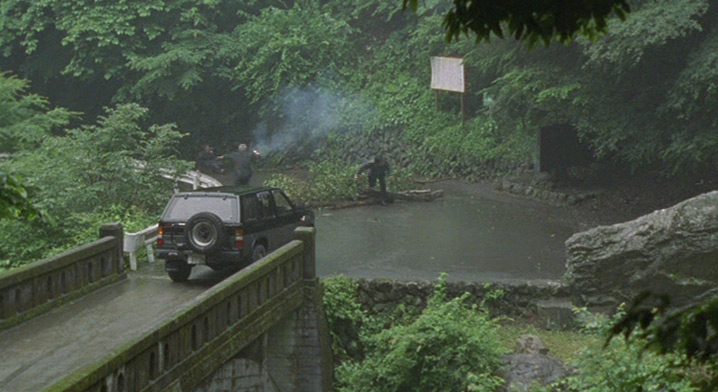 Other moments, rhythmic in their editing and moving confidently between static shots and hand-held camerawork, feel more like musical numbers than shoot-outs--a result, in part, of Miike scoring the film exclusively to Flower Travellin’ Band’s 1971 album Satori. A Japanese counterpart to Black Sabbath’s Paranoid, Satori is a great proto-metal record that's exuberant in its heaviness, intense but never self-serious. Its very presence makes a scene proceed as though choreographed. (This isn't only true of action sequences. Miike uses F.T.B. to score a montage of Arata and his best friend Shimatani on the town with two Korean hookers, and their night seems decadent, enticing, and seducitvely self-destructive—a bit like the hang-out scenes in Zabriskie Point.) 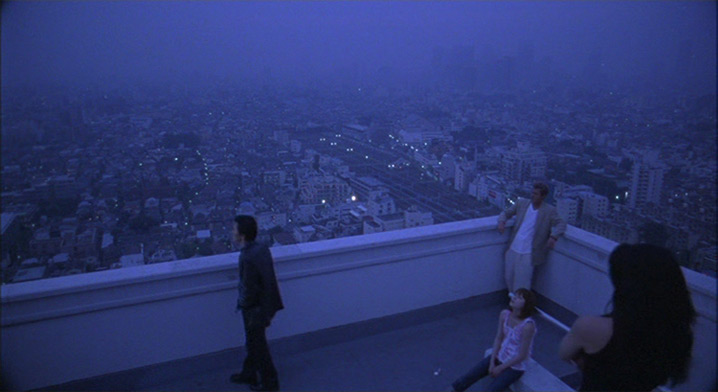 The decision to score the movie with Flower Travellin’ Band was inspired by the casting of Uchida and Joe Yamanaka, the band’s guitarist. Miike purportedly never heard their music until he met the men as actors, but he came to like it so much that the film became something of a tribute to their work. The music on Satori explains Arata's desire for violence where the dialogue does not, and Miike clearly adores the men who made it. Not only does Uchida get to yell "Rock and Roll!" Yamanaka, playing a police detective, at one point interrogates a suspect in song while playing guitar. Like any fan, Miike becomes too distracted by their presence to see them as part of the narrative and must first acknowledge their having been in Flower Travellin' Band. 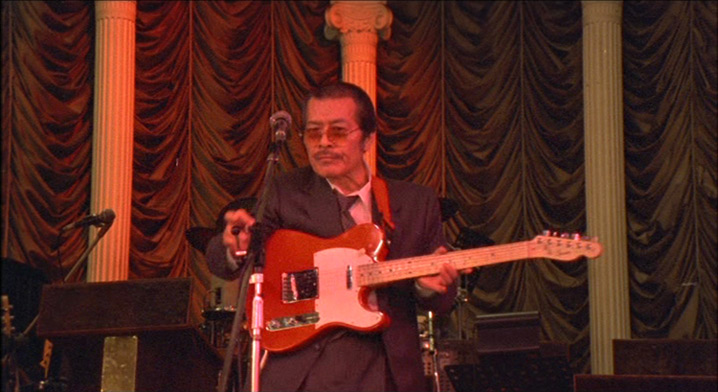 It’s worth noting that Deadly Outlaw: Rekka’s musical quality makes it feel more like Fukasaku’s Graveyard of Honor than Miike’s ostensible remake of that film (his previous collaboration with Takechi and Seto). It’s symptomatic of Miike’s to-the-victors-the-spoils approach to cinema that he should pay tribute to certain influences when not expected to and vice-versa. In Rekka, Arata has an outburst in front of the Otaki elders, and Miike breaks up the scene with jump-cuts that move from one weird gesture to another, a quick replay of the comic montage of bad lawyers in The Guys from Paradise.

For all these exaggerations, Deadly Outlaw: Rekka is still punctuated by moments of intense sympathy—for Arata's bloodlust, for his mother's regret, for Yamanaka's musical ability—and rather than sit at odds with the depiction of cold yakuza code, they deepen it. Arata's vengeance doesn't just upset order between the crime families; it stops so many colorful lives made possible by the yakuza from being fully enjoyed. After an ambush kills the head of the Otaki clan and several innocent bystanders in a hospital waiting room, Miike concludes the scene with a stranger walking in oblivious and buying a drink from the vending machine. It's the funniest non-sequitur of the film--even trumping that impossible missile launcher in the climax—but it leaves a bitter aftertaste. How better to note the lost singularity of these characters than with an image so utterly mundane? 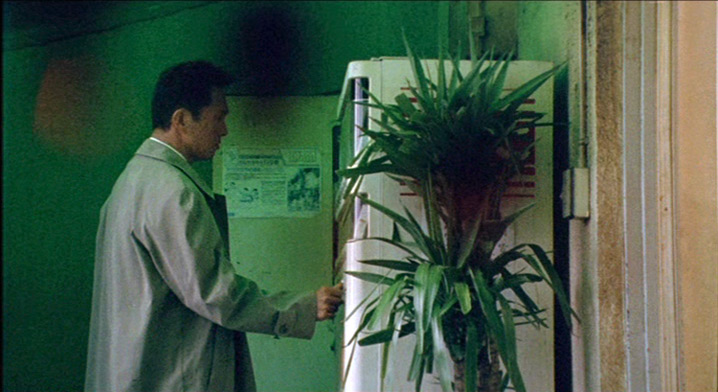