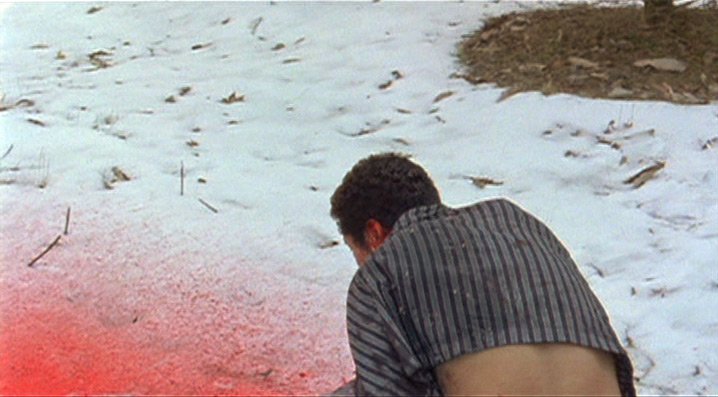 The premise of Graveyard of Honor—the rise and fall of a mad-dog gangster—is a familiar one, traced as early as The Public Enemy in 1931, if not earlier. What makes it different from most of its forebears (including White Heat [1949], both versions of Scarface [1932, 1983], and Kinji Fukasaku's own Graveyard of Honor [1975]) is that Takashi Miike works to avoid any intimations of a narrative arc. Instead of setting up a pattern of hubris and comeuppance, Miike organizes the film as an accumulation of detail, with a special preoccupation with how things work: the way yakuza from different families forge alliances, how a prisoner can give himself salmonella to get into the infirmary, how the body reacts to heroin. For all the instructive, caught-in-the-moment observation, though, it is a frighteningly amoral film, less an object lesson in criminal psychopathology than an attempt to meet that psychopath on his level.

There’s something distinctly contemporary about this approach. It’s more in line with Wong Kar-wai or Claire Denis than with Fukasaku—whose seductive, nearly-musical filmmaking seems to have had little influence on this supposed remake. Like those recent masters, Miike is after the tenor of immediate experience, things that must be intuited before they can be understood. Most of the film—and practically every moment of violence—is filmed messily, hand-held, to underscore the impulsive nature of its lead character. When the camera bothers to stay put, it does so from cautious distance, as if in response to the yakuza's unique atmosphere of privilege and extreme hesitation. 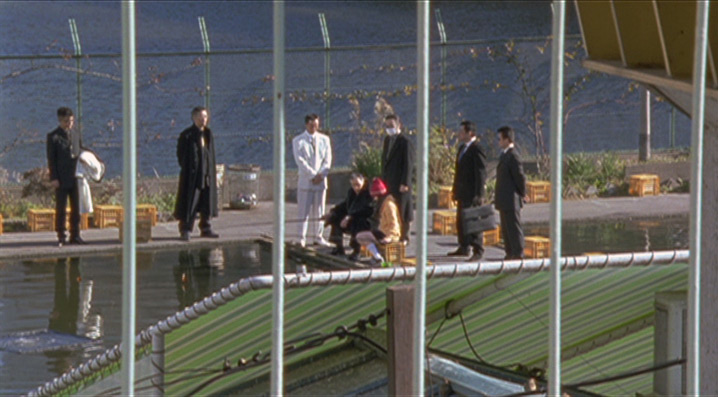 Graveyard of Honor derives much of its queasy charge from the feeling that it's eavesdropping on moments we shouldn't be privy to. For this air of authority, we should acknowledge the contribution of screenwriter Shigenori Takechi (a former yakuza whose collaborations with Miike can be compared to writer Nicholas Pileggi’s work with Scorsese) and the uniform naturalism of the cast. Even the terrifying lead performance by Goro Kishitani—as the sadistic, megalomaniacal Ishimatsu—suggests the behavior of an actual psychopath. With such verisimilitude in place, Miike is able to operate as though in thrall to the material, rather than with the cartoonish embellishment of many of his previous crime films. Throughout, he acknowledges that this is a real culture he has not experienced: In order to better know the yakuza, he must first admit how much he does not know. The unchoreographed camerawork, which always seems to be catching up to the characters, only emphasizes his distance.

In interviews around the film’s release, Miike (in characteristic deadpan) described the violent, heroin-addicted rapist Ishimatsu as “a friend” he enjoyed following around; and one could regard the film’s context-free approach as an attempt at empathy. The film covers nearly 20 years of recent history, but the mood is generally unhurried, the duration discernible mainly through newspaper headlines. Japan’s economic bust of the early 1990s is mentioned only once, but it coincides with Ishimatsu’s exile from the family that took him in, and it could be seen as a structuring absence of the film’s second half, which depicts his increasing desperation. 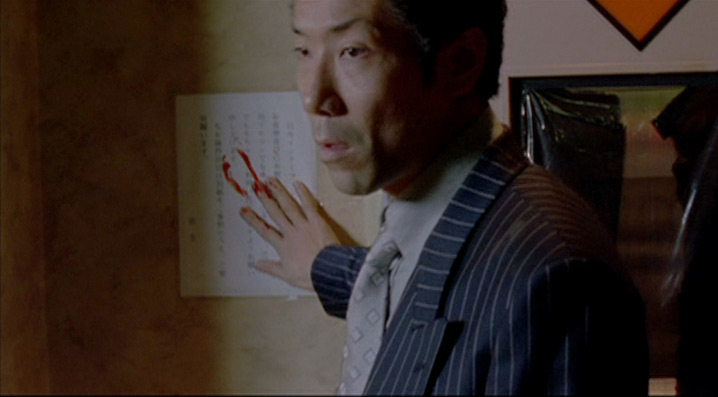 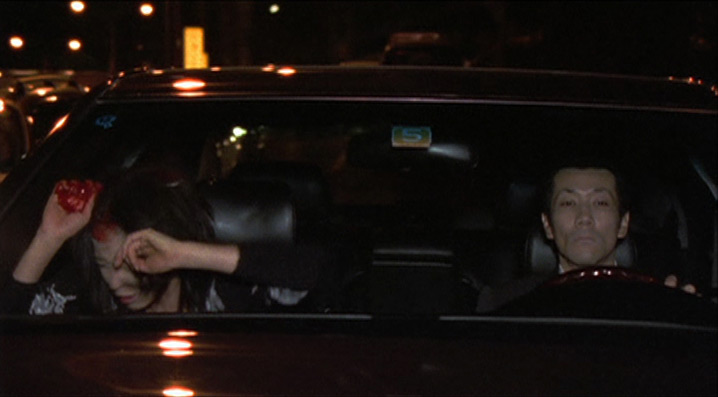 Whatever Ishimatsu’s station, though, a sense of narrative drift is always palpable. In one of the first scenes of Graveyard of Honor, Ishimatsu celebrates his newly privileged status in the Sawada family by raping a cocktail waitress at a karaoke bar: Though introduced a nameless victim, she ends up his common-law wife, becoming the film’s second-most important character. This woman (whose name, Cheiko, we learn only half-way into the film) joins Ishimatsu without protest in both his flight from the yakuza and in heroin addiction. She is a creature of total passivity, the (sadly) perfect foil to his headlong drive, and the the film's curious pacing is as much a reflection of her as it is his. Tellingly, one of the film’s most affecting motifs is of Ishimatsu realizing the weight of his violence (after raping Cheiko, stabbing a rival, killing his boss) after seeing blood on his hands. Towards the end of the film, Cheiko coughs up blood a few days before dying of an overdose: As time moves like a buoy at sea, so do traits move from one character to another.

The resulting tone is one of mordant fascination and, ultimately, pitilessness; and it’s most pungent during the scenes of heroin use. (Ishimatsu starts using heroin after killing the boss of his family, making his inevitable decline as ugly as possible.) In keeping with Miike’s restlessness as a storyteller, this subplot momentarily overwhelms the film, eliciting a new kind of stylistic intensity. It reaches a head when Ishimatsu shoots up in the safe-house apartment where he’s hiding from the family he betrayed. Metal cranked up on the stereo, sunlight pouring abrasively through the windows, he writhes across the floor, pulling guns out of cabinets and firing them at the ceiling. In long takes, the camera follows him at his level, again hand-held, as if documenting a feral animal in captivity. 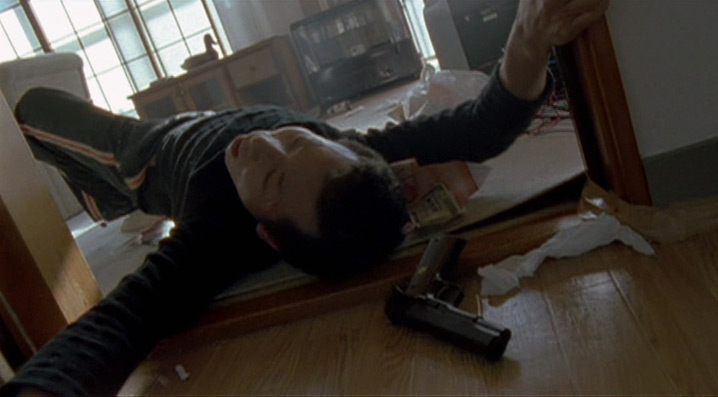 A bit more about this apartment. It’s an unassuming one-bedroom in one of those Tokyo complexes integral to Miike’s visual vocabulary (serving as a major setpiece in Ichi the Killer [2001], Detective Story [2007], and numerous others): Their geometric order practically invites violation by reckless behavior. The apartment in Graveyard of Honor had been occupied by a family before Ishimatsu and Cheiko come to it; children’s toys and drawings have been left behind. Beyond exuding simple irony (Look at the normal life our heroes will never get to have...), it projects a sense of comfort alien to any other setting of the film. But alienation, like yakuza diplomacy, turns out to have its own special timbre. Soon after arriving to the safehouse, Cheiko and Ishimatsu sit on the floor and eat from take-out boxes. It’s an image familiar to anyone who’s had to eat in a motel room, and its aura (of self-conscious anonymity, made familiar by the consistent design of motels, conference rooms, etc.) pours out on to the evidence of family life. This may be the film’s most effective mise-en-scène, a place where the characters’ alienation intersects with our own. 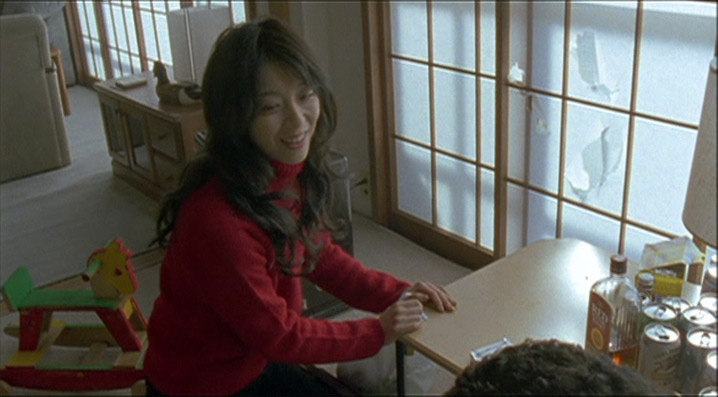 It's also eerie because so few moments in Graveyard of Honor can be said to address a non-yakuza audience. This is a film whose consistency belongs only to its characters (Besides ignoring most current events, the film makes no reference to the characters’ class background before joining the yakuza) and whose perspective comes wholly from without. Miike’s greatest accomplishment here is in preserving that distance between viewer and film for over two hours, letting it infect some of the most basic elements of the film: time's passing, relationships between characters (some very important ones appear for only a couple of scenes), violence.

Prior to Graveyard of Honor, it’s hard to think of examples in Miike’s films where violence was not in some way exaggerated, lingered over, exulted as a source of creativity. (And this would include both the terrifying violence of Audition [1999] and the disgusting violence of Ichi the Killer.) Here, Miike takes a nearly opposite approach, staging violent scenes so they transpire quickly and gracelessly—and in some cases, as if they haven’t been directed at all. Like the realistic scenes of yakuza in conference—or the somber jazz-trio theme that accounts for nearly all of the film’s music—these scenes hint at a sense of tragedy the criminals seldom recognize but that we as observers have better access to. Stemming from a primitive brutality the yakuza just barely keep under control, Ishimatsu’s rampage is colored by an uncanny feeling that it has occurred before, will occur again, and that all we can do is acknowledge its permanence.