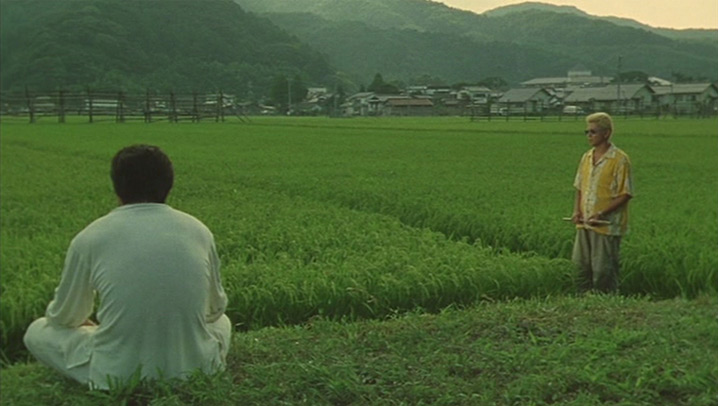 Takashi Miike's Dead or Alive 2: Birds (2000) alternates between ultraviolent scenes of yakuza war and a tender story set around a country orphanage. While there are countless action movies with a sentimental streak (most notably those by John Woo), this one feels without precedent in suggesting two separate movies run simultaneously. The mosaic approach is still disorienting, since Dead or Alive 2 remains uniformly sincere regardless of whether it's being familiar or absurd. You never sense quotation marks around the genre elements —or carelessness behind the non-sequiturs, for that matter. Miike simply invests himself in every moment as though it were a wholly new experience, much like a child watching his first film.

Much of Dead or Alive 2, appropriately, is about childhood. Two hitmen hiding out from a yakuza war--independent contractor Mizuki (Sho Aikawa) and yakuza strongman Shuuichi (Riki Takeuchi)—return to the island village whose orphanage they grew up in. After reuniting with each other for the first time in years (They lost touch in adulthood, despite being best friends as kids and both becoming hitmen in Tokyo), they take up with another childhood friend still living on the island and begin helping out at the old orphanage, which is made to seem like a summer-camp paradise.

The scenes of rediscovered youth are joyful but understated: Taking his rhythms from the pace of rural life and his ideas about composition from the underpopulated vistas, Miike achieves a feeling of real serenity. His images of child’s play —in flashbacks to childhood memories and contemporary scenes of the grown men recreating them —are some of the most touching he’s shot. (It's worth noting that Aikawa and Takeuchi seem to truly enjoy playing as children, giving the impression that a Takashi Miike set is something like summer camp, too.)

And yet these moments appear between scenes as violent as any Miike had shot at that time. This nuanced director gained international attention, a bit reductively, as a stager of great shock set-pieces, and Dead or Alive 2 does not disappoint in that department. The outlandishness comes both grisly (a shoot-out where Shuuichi kills a half-dozen yakuza point-blank) and comic (an early scene where Mizuki’s assistant illustrates gang war with boxes of cigarettes, edited for as much impact as the war itself), and in some amalgam of the two (Mizuki gets through a crowd of thugs with a cinder block he pulls from behind his back like a Looney Tunes character). It would be inaccurate, though, to say these moments overwhelm the movie as they do in the first Dead or Alive (1999), a film with which it shares only lead actors and title. Here, shock value is but one generic element among many.

The generic shifts occur so often, in fact, that within 15 minutes Dead or Alive 2 seems less like pastiche than something like polytonal music, where different kinds of movies exist autonomously and at once. This strategy affects even the most basic elements of visual storytelling. Consider the sequence leading up to Mizuki’s Looney Tunes moment: Miike cuts from menacing low-angle shots of the pursuing yakuza gang (familiar from any number of action movies) to becalmed medium shots of Mizuki walking sun-kissed down another street. This isn't Hitchcockian cross-cutting, meant to show a man ignorant of his danger; Mizuki is fully aware of the fact he’s being followed: There just happens to be something lovely about Sho Aikawa walking the Tokyo streets in afternoon. In a sequence most directors would use to keep time between fights Miike has a little fun with the form, daring us to see the character Mizuki (in a suspenseful situation) and the actor Aikawa (in a beautiful image) at the same time. 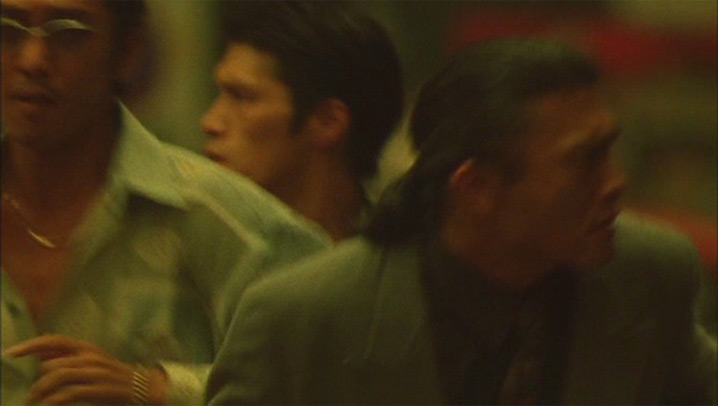 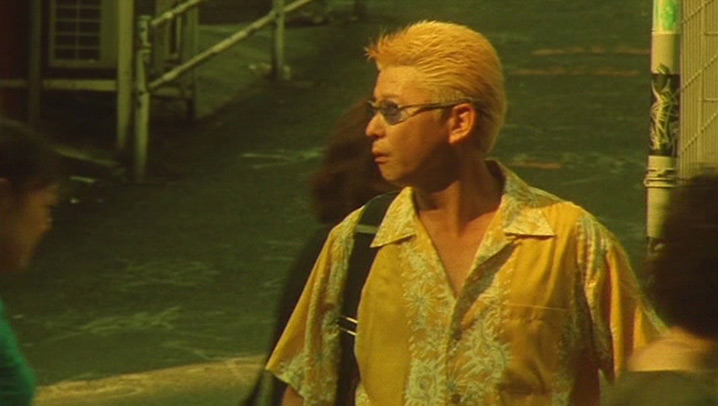 As the film advances, Miike juxtaposes scenes (and genres) increasingly at odds with each other, attempting bolder and bolder clashes of material. The scene described above gives equal space to genre-bound action movies and art film-inflected patience; later scenes put trademarks of Asian action against slapstick and even children's-film archetypes. After Shuuichi and Mizuki become fixtures at the orphanage, they take part in a children’s theater performance when two traveling actors are injured in a car crash. The resulting performance is easily the weirdest scene of the film: The former class clowns revert to their old ways on stage, improv-ing sexual innuendo and a cyborg fight during a story about “a lion who loved chocolate and doughnuts." It would be a great moment in itself, but Miike intercuts it with the yakuza war back in Tokyo, brutal chaos with dozens of assassins, cartoon torture, and necrophilia. It's vulgar riffing on familiar material, much like Shuuichi and Mizuki's in the school play —which ends up being a huge hit, incidentally. After several minutes of sound and fury, Miike savors the image of the audience enraptured, their imaginations alit. 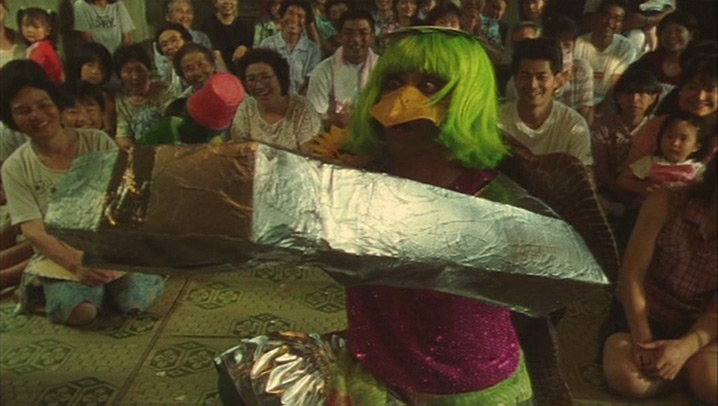 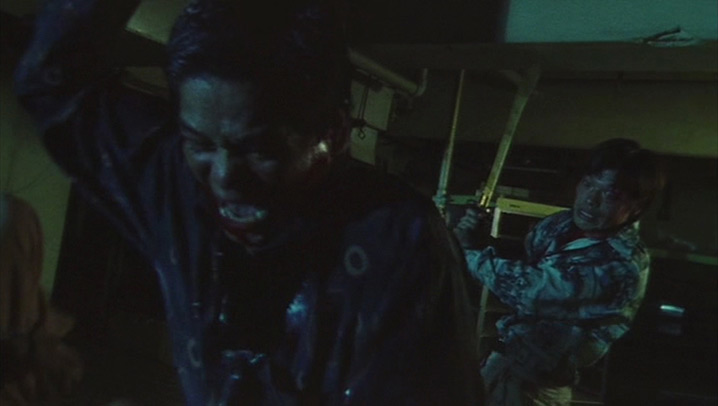 Here, unchecked creativity erases whatever horrors may exist beyond it. If there is a moral defense of violent, preposterous genre films —on which Miike has built a happy career —it may be summarized with these five minutes of Dead or Alive 2.

Are there political ramifications to the filmmaking? Miike would seem to think so. In the most audacious sequence of Dead or Alive 2, Shuuichi and Mizuki pull off a series of violent hits and spend their salaries on vaccinating children in the third world. "Vaccinations cost as little as 40 cents in some countries," says Mizuki in one of the film's long static takes (which recall two other great films about epiphany amidst violence, Takeshi Kitano's Fireworks and Shohei Imamura's The Eel). "Get rid of one jerk, and you vaccinate 100,000 kids." Violence is juxtaposed again, this time with documentary footage of refugee children in Africa and east Asia. Images originally created in despair are repositioned to become images of hope.

Dead or Alive 2 may conjure up some disgusting sights, but nothing that exists in the imagination could be more obscene than the reality of so many children dying of preventable illness. Miike would continue making moments as shocking as anything in this film; but Dead or Alive 2 provides a context for them, if not a statement of purpose. Besides finding value in onanistic creativity (literally, during the children's play), Miike depicts imagination as a force radiating outward to connect people. This is true of the playground sequences, but just as much so in the scenes of comraderie between the two heroes. Miike is so fond of their interaction, in fact, that he can't bring himself to see them die. They seem to go on for days after taking several bullets during the climax, holding out for the long train ride back to the village, where they reminisce about being treated to rice noodles as kids and go out of their way to be friendly to strangers. 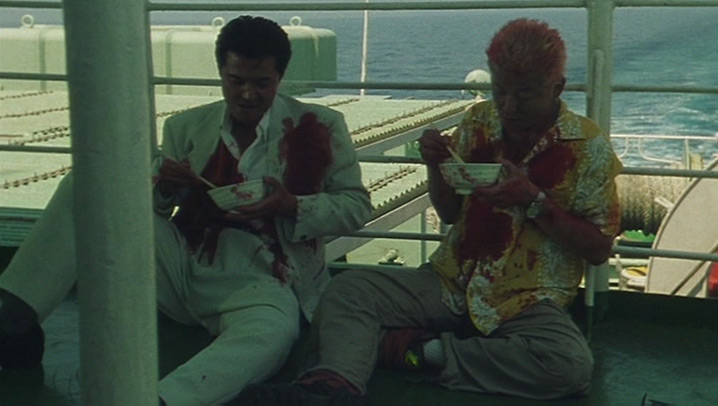