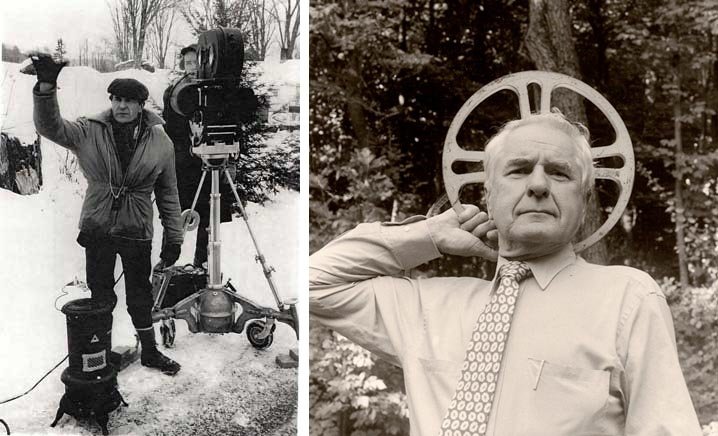 Photo on the right: ©Syd M

"Seminal avant-garde filmmaker and retired Bard College professor Adolfas Mekas, who co-founded Film Culture magazine with his brother and fellow filmmaker Jonas Mekas in 1955 and taught at Bard for 33 years, died this morning from an unexpected heart problem," reports indieWIRE's Eric Kohn. He was 85. "After immigrating from Lithuania with his brother in 1949, Mekas played a key role in the New American Cinema movement that congealed around the publication of Film Culture. He produced several experimental features, including the acclaimed 1963 love triangle comedy Hallelujah the Hills, which played at the Cannes Film Festival that year."

Richard Roud, who programed the film for the first edition of the New York Film Festival in 1963, call this story of two men in love with the same woman a "satire on the American way of life, and at the same time a hymn to the joys of youth and friendship." From the Time Out Film Guide: "A highpoint from the 'innocent' years of American underground cinema, and something of an enduring delight for real film buffs. Mekas's comedy starts from an enthusiastic parody of French 'new wave' concepts like using two actresses to play one character, and manages to go on to incorporate references (part satire, part homage) to what seems like every other branch of cinema extant. It ranges from samurai movies to Chaplinesque slapstick, and it hits the intended tone between love and skepticism far more often than you'd have thought possible. The main thing is that it's recklessly enthusiastic about itself and about cinema in general — and the enthusiasm is infectious."

Update, 6/3: Bruce Weber in the New York Times: "Mr Mekas, who lived in Rhinebeck, NY, was a founding member of the film department at Bard College in Annandale-on-Hudson, NY, and taught there from 1971 to 2004; he directed its film program from 1971-1994." Further in:

His other films include The Brig (1964), directed by both brothers, an adaptation of a grim play performed by the Group Theater about Marines confined in a military prison, and Windflowers (1968), an elegiac, Vietnam-era story of a draft dodger who is shot trying to escape from the FBI.

At his death, Mr Mekas was working on a film about Giordano Bruno, an Italian thinker who was burned at the stake as a heretic in 1600. Mr Mekas described Bruno as "the first beatnik" and called the film, with typical cheek, Burn, Bruno, Burn.

His wife said she was initially drawn to him by his unexpected, demonstrative humor; on their first date, he threw his hat out the window of a taxi cab, she recalled. Another time, after a film opening at the Museum of Modern Art, he rolled up the red carpet, put it under his arm and walked away with it, as if to take it home. (No one stopped him, she said, but he brought it back.)

"These two guys," she said about the Mekas brothers. "I always told our son: 'They came to this country with $10. They couldn't speak the language, and they started the first serious film journal in English. Not bad.'"