The following is an extract generously provided by Verso Books from their new release, "St. Paul," the first English translation of Pier Paolo Pasolini's screenplay about the apostle Paul. 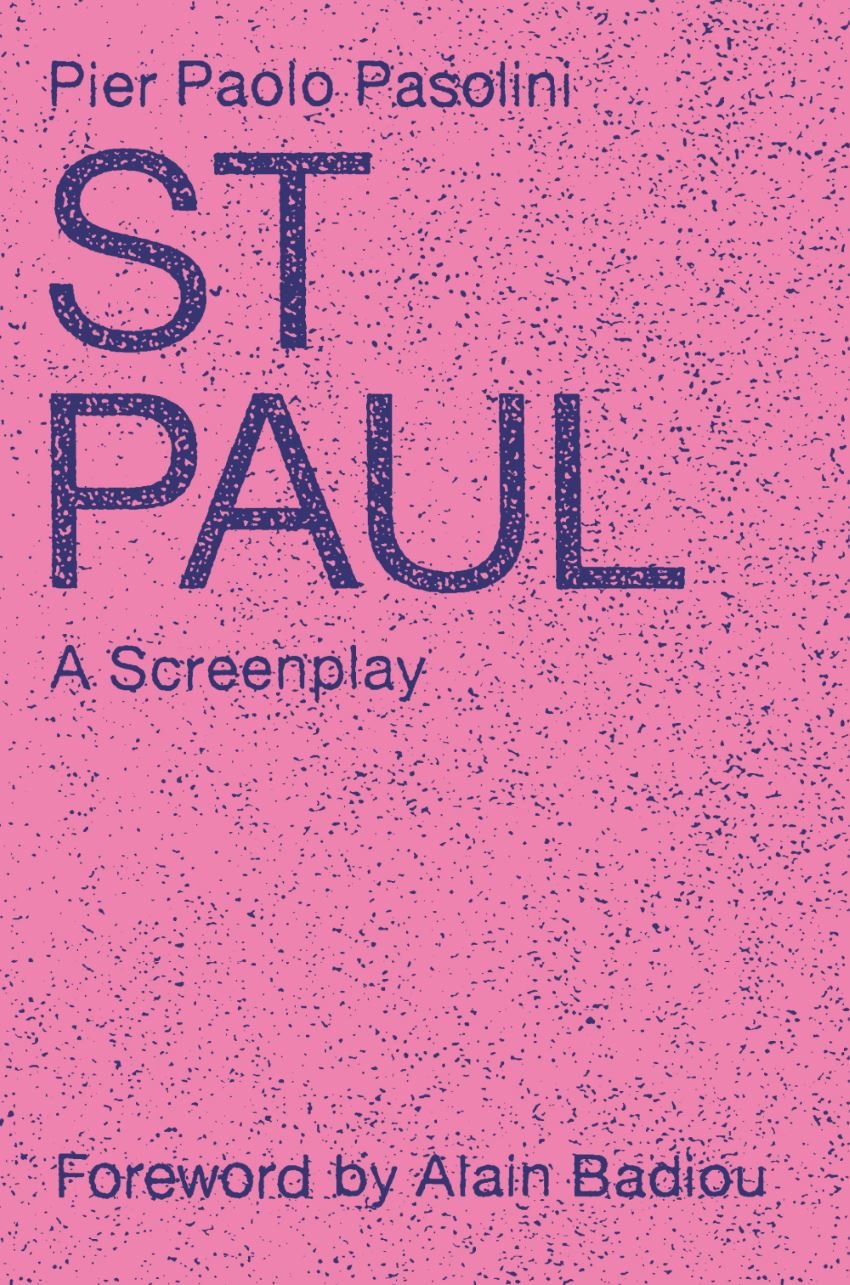 It is well known that the Christian reference played a role of primary importance in the formation of Pasolini’s thought, despite (or because of) the sexual and transgressive violence that inspired his personal life and bestowed a particular coloration on his communist political choices. In a certain sense, it was a sacrifice bordering on the sacred – the mysterious death of his brother, an Italian partisan, probably killed by the Yugoslav resistance at the moment of Liberation – that led both to his view of the judgement one can make on History, and to the severity he displayed, from the late 1950s on, towards the Italian Communist Party. Basically, the PCI was guilty in his eyes of having allowed the young people of the Resistance to die without legitimate heirs or genuine political paternity, which led also to abandoning to their fate the young proletarians of the modern housing estates. Among other texts, the broad and splendid poem Vittoria presents the history of this denial, suggesting in the background the denial of St Peter: by denying Christ, Peter had shown too much attachment to his own safety; and against Paul, at Antioch, too much attachment to the old rituals that limited the universality of the message.

It was Peter, rather than Paul, who prefigured the sclerosis of the Church, and likewise that of the PCI. Consider this passage, which stigmatizes the ‘realism’ of political parties, caught in the ‘mysterious debate with Power’ and deaf to the voice of young people in revolt:

… Joyous
with a joy that rejects any second thought
is this army – blind in the blind
sun – of young dead, who come
and who await. If their father, their leader,
leaves them alone in the whiteness of the hills, in the peaceful plains – absorbed in a mysterious debate
with Power, enchained to its dialectic
that history forces him unceasingly to reform –
quite gently, in the barbarous hearts
of the sons, hatred gives way to love of hate.

More generally, Pasolini relentlessly confronted the forms that a life devoted to the naked truth of the subject could take vis-à-vis the avatars of the Passion and the pitfalls of holiness. If we compare him, for example, with Bataille, it is easy to maintain that it is with much more sincerity, exposure to risk, and poetic gift that Pasolini made the dialectic of abjection and the sublime his own. If we compare him with Genet, we have – though in this case equal in terms of quality – the whole difference between sublimation by way of poetry (or the cinema) and sublimation by way of prose (and the theatre). The former orients itself towards origins, fables and myths, the figures of history (Oedipus, Christ, St Paul, Dante, Gramsci) the latter to an intimate tale mingled with and borne up, as it were, by the latent breath of the history of peoples: underclass prison angels, prostitutes, blacks, Palestinians… But in every case, on the horizon of meditation lies the question of religion. Not as a possibility still open, there is no question of believing in it, but as a poetic and historical paradigm of the possibility of scathing confrontation, at the heart of individual and collective existence, with the implacable truths that religion can express and with the meaning it may or may not receive from the world such as it is.

It is indeed this rift between meaning and truth that is at issue in the figure of Oedipus, as Pasolini’s very fine film restores him: as soon as one discovers the truth (murder of the father, incest with the mother), the only meaning that life still finds is in blindness and death. But this is also the figure of Christ: so that truth will come to the desert world of men, God must present the absurdity of his own torment. Hence the power of the film that Pasolini drew from the Gospel According to St Matthew. And is it not tempting to see Pasolini’s own death, which remains so obscure, as the Passion of true desire fulfilled in sacrifice under the insensate knife of the person this desire encounters?

It is only too natural, in this context, that St Paul should have been a tutelary figure for Pasolini. He saw him, in fact, as the first embodiment of the conflict between political truth (communist emancipation being the contemporary form of salvation), and the meaning this could assume in the weight of the world. In our world, in fact, truth can only make its way by protecting itself from the corrupted outside, and establishing, within this protection, an iron discipline that enables it to ‘come out ’, to turn actively towards the exterior, without fearing to lose itself in this. The whole problem is that this discipline (of which Paul is here the inventor under the name of the Church, like Lenin for communism under the name of the Party), although totally necessary, is also tendentially incompatible with the pureness of the True. Rivalries, betrayals, struggles for power, routine, silent acceptance of the external corruption under the cover of practical ‘realism’: all this means that the spirit which created the Church no longer recognizes in it, or only with great difficulty, that in the name of which this was created.

Paul is one of the possible historical names of the tension between fidelity to the founding event of a new cycle of the True (metaphorically, the resurrection of Christ; actually, the communist revolution) and the rapid exhaustion, under the cross of the world, of the pure subjective energy (holiness, or totally disinterested militancy) that the concrete realization of this fidelity would demand.

Pasolini wanted to make a major film on the dialectical character of Paul. This would essentially be a sequel to his film on the Passion of Christ: the history of the Church, which, as guardian of the meaning of this Passion, propagates and perpetuates its truth effects, and also the history of the failure of this guardian- ship. He did not find financing for this film. But we have a very detailed scenario of it, a scenario that in my view is in itself a literary work of the first magnitude.

As he did in his Oedipus Rex, Pasolini juxtaposed the ancient reference with the contemporary, but in a very different manner. The action of Saint Paul, in fact, is situated completely in the contemporary world, whereas in Oedipus Rex, the contemporary drama with the mother ‘duplicates’ the connected visibility of the legendary tale. What pertains totally to antiquity in Saint Paul is quite simply, and exclusively, the apostle’s own words, the text.

We might say that in Oedipus we have a ‘distribution of the sensible’, in the meaning that Jacques Rancière gave this expression, the history – the legendary text – being distributed between two different regimes of visibility, the ancient and the modern. In Saint Paul, on the other hand, the sensible is homogeneous (it belongs to our world), while a large part of the intelligible (what is thought and uttered), being drawn from the epistles of Paul or the Acts of the Apostles, is a reproduction of the antique.

Pasolini’s wager, therefore, is that the truth of which St Paul is the divided bearer, the sacrificed militant, can make sense in the world of today, thus proving the latent universality of his thought. We can see the United States in place of Rome, the intellectual snobs of Rome (whom Pasolini hated) in place of the philosophers of the Athenian agora, or echoes of collaboration and the Resistance in France: Paul’s text crosses all these circumstances intact, as if it had foreseen them all.

What this meant for Pasolini was that all corruptions resemble one another, declining empires and their exhausted valets resemble each other, and the betrayers of all truths exposed to lack of meaning all wear the same mask.

With stupefying virtuosity, Pasolini manages this very risky construction, in which the invariance of a text that bears truth – the invariance, basically, of the Idea – is shown, in the Passion it supports, as having to find an acceptable meaning in unappropriated worlds.

This scenario should be read, not as the unfinished work that it was, but as the sacrificial manifesto of what constitutes, here as elsewhere, the real of any Idea: the seeming impossibility of its effectuation. Pasolini was scarcely optimistic as to the possible metamorphosis of this impossible-real in a world that would finally have meaning. Do we have reasons to be more optimistic than he was? The existence of Pasolini’s poems and films is certainly one of these reasons, as optimism has never been anything but a pessimism overcome by its own subject, in the work of universal significance that, against all expectation, this has produced.