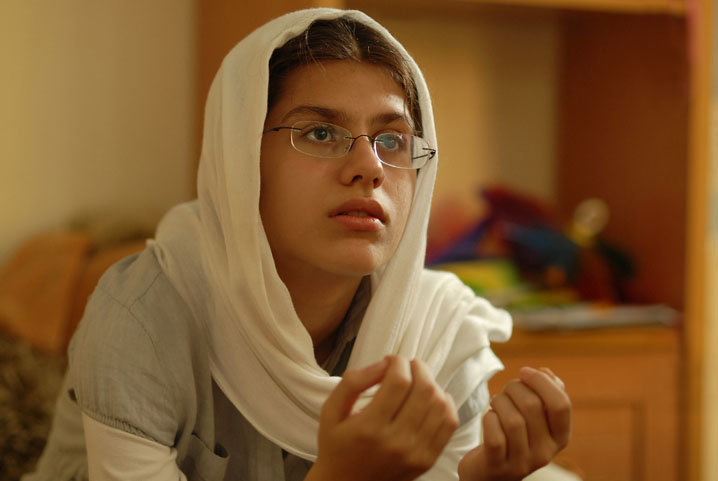 What a night for Asghar Farhadi's Nader and Simin, a Separation. Not only has the International Jury of this year's Berlinale, presided over by Isabella Rossellini, awarded the film the Golden Bear, but, in a most unusual move, the jury's also decided to give the Silver Bear for Best Actor and Silver Bear for Best Actress to the male and femaie ensembles, respectively. Actress Sarina Farhadi (above) thanked all those in Iran who've stood in line for hours for tickets to see the film — which, we might as well go ahead and mention, has also picked up the Prize of the Ecumenical Jury for best film in the Competition.

Béla Tarr's The Turin Horse has won the Jury Grand Prix (Silver Bear). Tarr was on hand to accept the award, but decided to say nothing once he'd gotten up on stage. The Turin Horse is FIPRESCI's choice for best film in Competition.

Silver Bear for Best Director goes to Ulrich Köhler for Sleeping Sickness. Köhler made a point of extending special thanks to one of his producers, Maren Ade.

The Silver Bear for an Outstanding Artistic Contribution is split this year — sort of. The winners are cinematographer Wojciech Staron and production designer Barbara Enriquez for their work on El Premio (The Prize).

Joshua Marston and Andamion Murataj have won the Silver Bear for the Best Script for The Forgiveness of Blood.

The Alfred-Bauer Prize has been awarded to Andres Veiel's If Not Us, Who?

The Golden Bear for Best Short Film goes to Park Chan-wook and Park Chan-kyong's Night Fishing — which, as you'll have likely heard, was shot on an iPhone.

Takahisa Zeze's 4.5-hour Heaven's Story has won both the FIPRESCI Prize and the NETPAC (Network for the Promotion of Asian Cinema) prize for best film screening in the Forum. Mainichi Japan reports that this "is the third consecutive year for the [FIPRESCI] award to go to a Japanese film, following Parade by director Isao Yukisada last year and Love Exposure by director Sion Sono in 2009." Sono's film, you may remember, is no sprinter, either, running nearly four hours. These people in the Internatioanl Federation of Film Critics are not wimps.

More Forum awards: The Prize of the Ecumenical Jury has been presented to Stéphane Lafleur's En terrains connus (Familiar Ground). The Conféderation Internationale des Cinémas D'Art et Essai (CICAE) awarded their prize to Bujar Alimani's Amnistia, with a special mention going to Tom Fassaert's De Engel van Doel (An Angel in Doel). And the Tagesspiegel Readers' Prize goes to Erika Hníková's Nesvatbov (Matchmaking Mayor); click on the names of the prizes to see the juries' statements.

Winners of the Crystal Bears for the best films in the Generation14plus program were announced yesterday; Andrew Okpeaha MacLean's On the Ice has won Best Feature. The festival also lists the winners of the Crystal Bears and Deutsches Kinderhilfswerk Awards in Generation Kplus, the program for even younger audiences. Arild Andresen's Keeper'n til Liverpool (The Liverpool Goalie) takes Best Film.

Earlier today, "the young French-German-Bosnian jury awarded the Dialogue en perspective prize. It goes this year to Dirk Lütter's film Die Ausbildung (The Education). The award was initiated in 2004 by the Franco-German Youth Office (FGYO), an official partner of the Berlinale, in association with Perspektive Deutsches Kino."