The democratization of art—to continue recent preoccupations—has enabled a proliferation of essay films in recent years. It’s not difficult to see why: though anybody may now be able to pick up and point a camera, assembling the cast and crew, and securing the funding and resources, with which to complete a narrative film continues to be a whole other matter.

Consequently, there has always been a do-it-yourself aspect to the essay film, and many filmmakers have taken it up as a means by which to position themselves against a more vertically integrated industry. The essay film’s popularity among filmmakers of marginalized identity is no coincidence: female and feminist filmmakers, homosexual filmmakers, transgender filmmakers, filmmakers of color and other artists informed in some way by a political and/or social oppression. There’s something potentially radical about the essayistic form.

None of which is to say any of these films express any more a coherent worldview than that of a film produced under more standardized or commercialized forms of collaboration. Indeed, there’s an apparently fundamental contradiction in the essay film: that while the political strength of a genuinely oppositional movement is measured by its size, consciousness and the extent of its structural organization, the innate individualism of the essay film seemingly limits or destabilizes any intended oppositional qualities.

Put another, more obvious way: just because someone is able now to voice her or his ruminations on a chosen topic with an unprecedented financial ease, it doesn’t necessarily follow that the final product expresses a coherent worldview. And if an argument isn’t coherent, it should be engaged with—in the military sense.

One counterargument might emphasize the essayistic part of the term, implying that the process of investigation is more important than the final product. Indeed, with its dialogic qualities—usually but not always exemplified by a disembodied narrator—the essay film is a more explicitly subjective expression than a more easily categorized fiction film or documentary.

This is all fine and well, then, but for the banal assumption that the personal/subjective is a thing of inherent strength. That idea seems to have been spawned by the same intellectual snobbery that champions ‘auteur cinema’ and/or ‘third cinema’ as by-default superior forms of filmmaking than the mainstream, and by frankly woolly (if admittedly poetic) ‘manifestoes’ that liken the fiction film to a car and the essay film to a bike. (Unpacked, such manifestoes don’t really say much.)

Needless to say, the recent increase of unwieldy, indulgent essay films must be questioned, because it speaks of an unfocused and indulgent culture at large, one in which the personal is not only emphasized as a means of political opposition in itself, but is also suggested as the most radical form of struggle. Such a tendency may have its roots in the general decline (read Stalinization) of the international working class, and the consequent disillusionment that has come to temporarily define and paralyze (common perceptions of) organized struggle.

Experimentation is one thing, but films won’t save themselves; for too long, terms like ‘experimental’ have been employed by artists all too happy to marginalize their own apparent radicalism, as if a marginalized status is something intrinsically commendable. 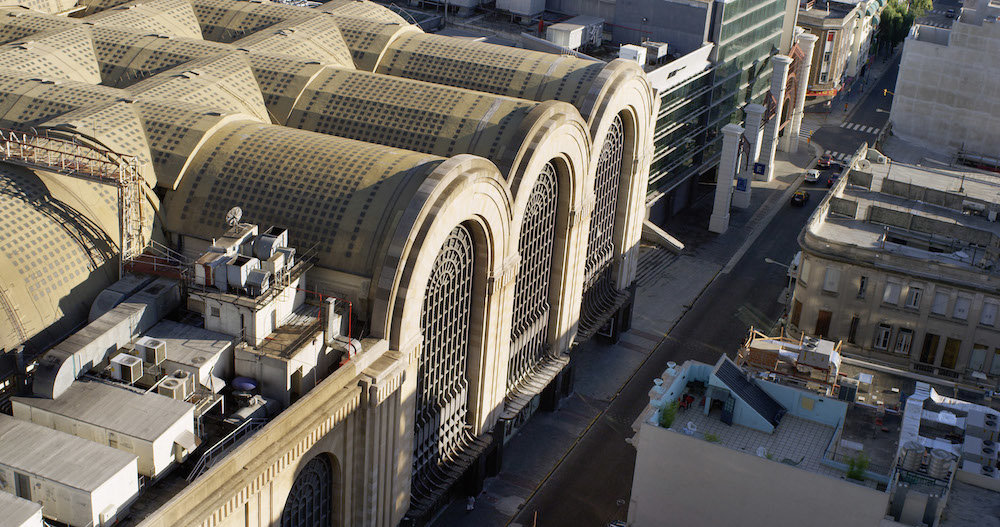 One essay film to world-premiere at this year’s Berlinale was Heinz Emigholz’s newest feature-length film, The Airstrip. The 21st part of his ‘Photography and Beyond’ series and the third installment of his ‘Decampment of Modernism’ series, Emigholz’s latest “hardcore documentary” (his term; meaning unknown) is billed as an architectural roundtrip from Berlin to Rome, Paris, Bologna, Buenos Aires, Mexico City, Tokyo and others. Its thematic starting point is what’s known as ‘the zero hour’: that time between the dropping of a bomb and its detonation upon landing. Of the buildings photographed in the film, many are airports.

Emigholz is a filmmaker of considerable talent. Works such as Parabeton: Pier Luigi Nervi and Roman Concrete (2012) demonstrate a masterful sensitivity to and control of visual composition and sound design. The ways in which Emigholz frames and captures his architectural subjects, assembled in such a way that they begin to cumulate an unspoken narrative meaning, allow for a profitably contemplative and deceptively intelligent register. Regardless of aesthetic taste, scholars of and novices to architecture alike are likely to find a pleasing consistency in the film’s editorial and structural rhythms. Some of its passages are remarkable.

Parabeton was the first in Emigholz’s ‘Decampment of Modernism’ series. The third—following Perret in France and Algeria (2012)—is, as far as this critic can tell, a hotchpotch of ideas that never quite gel. In press notes, Emigholz talks of his decision to fly, in 2010, to the Northern Mariana Islands—the group of islands in the western Pacific Ocean whose fluctuating ownership (between Japan and the US) played a significant role in the Second World War. It was from Tinian, one of the 15 islands that constitute the Northern Marianas, that the Enola Gay and Bockscar B-29 planes took off to drop the atomic bombs on Hiroshima and Nagasaki respectively.

“I owe my life to the first two atom bombs,” says Emigholz, “and, as a German, to the Japanese fanaticism that led to their being dropped on Japan.” Early in the film, Natja Brunckhorst narrates in voice-over: “Give an army to the ridiculous, and they are no longer ridiculous… That’s the history of the 21st Century.”

Such radicalism! For all the film’s intermittently strong passages (a segment shot in Buenos Aires is particularly captivating), these curious and conflicted perspectives seem to risk further mystifying the haunting history (and legacy) of the two atomic bombs with which the US helped bring the Second World War to an end.

Setting out to examine the unthinkably endless and soon-to-be obliterated possibilities that ‘exist’ during the ‘zero hour’—irrefutable presents and alternative futures alike—appears to have distorted Emigholz’s imagination into an ambitious free-for-all. Some of it works, some of it doesn’t.

In many ways, Emigholz appears to be working within and against documentary norms, challenging the responsibilities a filmmaker assumes in tackling something as incomprehensibly frightening as a nuclear attack. Brunckhorst narrates at one point, for instance, that documentaries shouldn’t employ music, precisely at the point at which we hear a crescendo of strangely inappropriate elevator music. For better or worse, the one image that stayed with me was the film’s most incongruous: from around a corner inside an airport departure lounge, with neither reason nor rhyme, we see slabs of raw meat, a blue dress and other paraphernalia literally floating through frame. Do these constitute “the history of the 21st Century” too? 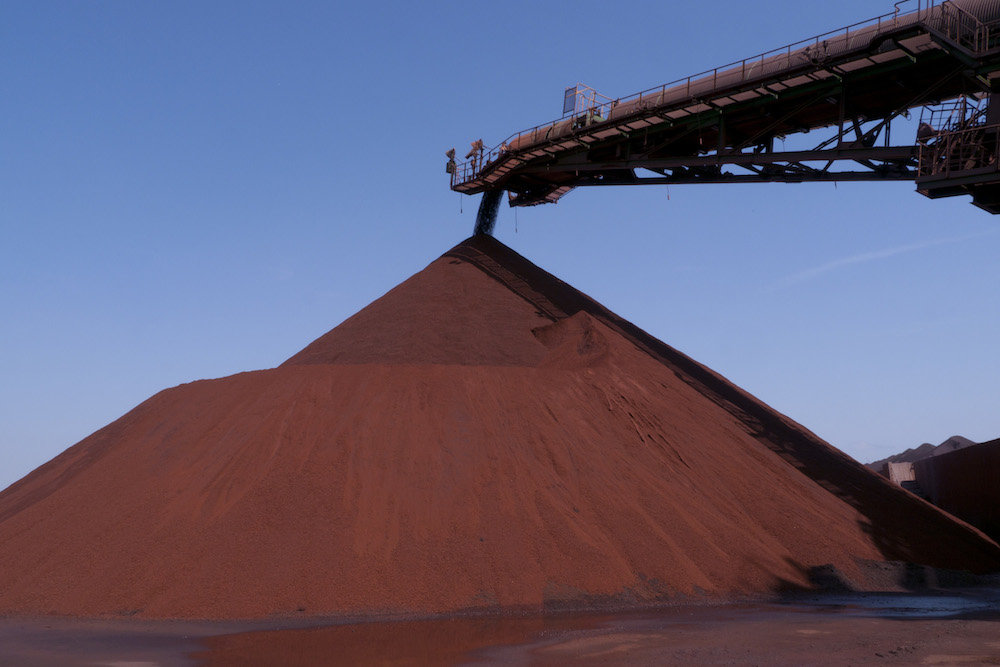 Kelvin Kyung Kun Park’s A Dream of Iron is a similarly ambitious essay film. Whereas Emigholz’s new work explores the conceptual moments that exist just before a bomb explodes, though, Park’s film focuses upon a period of economic boom following the mass devastation of a military conflict. More specifically, Iron takes as its primary subject the massive Hyundai Heavy Industries (HHI) shipyard in Ulsan, South Korea, construction of which began in 1972, almost twenty years after the end of the Korean War. Throughout the film, Park traces histories of labor protest and political unrest, such as when 78 workers occupied a Goliath crane in 1990.

Alongside this, Park is also interested in the ancient petroglyphs that adorn overhanging cliffs in Ulsan. Dating back to the Neolithic Era, the petroglyphs depict whales not unlike the giant tankers created today by HHI. Striving to capture an element of the sublime in today’s modern industry, the director likens the Neolithic engravings to HHI’s ships precisely because both evince the ways in which people stopped being scared of what they perceived to be the insurmountable, and gathered the resources by which instead to conquer it.

Two forms of modernity are juxtaposed, then: an era of industrialized labor by which containers of unthinkable size are built in order to assist man’s control and utilization of the world around him, and an era long before it, in which hunter-gatherer societies first grew the means by which to become agricultural.

Only, the juxtaposition seems at times not to be explicit enough. This is perhaps due to the version shown at this year’s Berlinale unfolding as a one-screen set-up, whereas it has previously been exhibited over three concurrent screens. Regardless, one feels Park striving for the profound here through a more poetic framework than he needs to.

Somewhere along the way, the fascinating sense of loss that begins to pervade the work seems to be a result of a more ghastly implication: not that the end of hunter-gatherer societies saw the beginning of private property, oppression and exploitation (all of which we know), but that there is little in the way of a future beyond the current predicament. There’s a great deal more to be said about these dialectical tensions, but the film doesn’t quite commit to them—in spite (or perhaps because) of some fantastic shipyard sequences to a symphonic score. 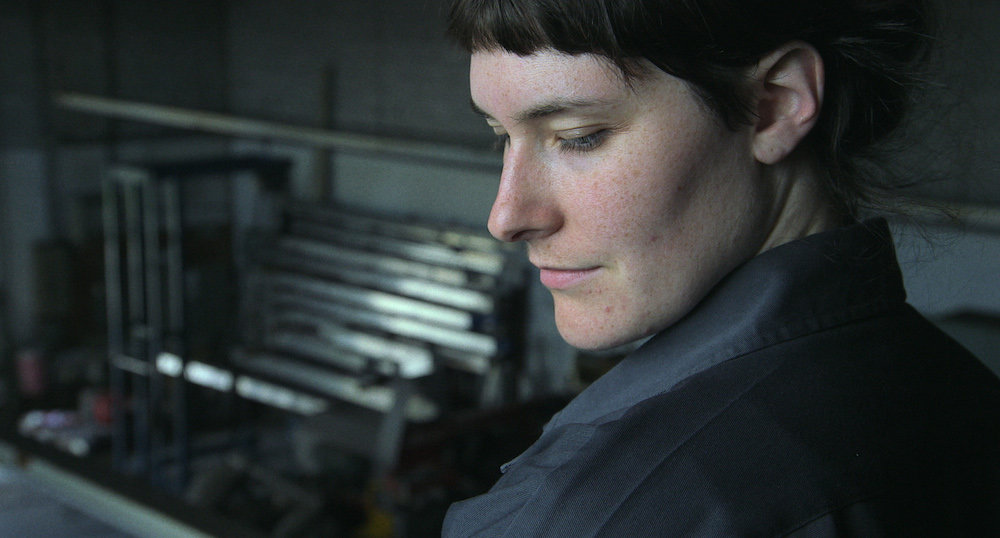 The modern workplace is also the subject of Denis Côté’s latest film Joy of Man’s Desiring, whose plotless succession of semi-fictionalized sketches in a giant anonymous warehouse plays out in an alluringly essayistic fashion. Indeed, not only do actual aphoristic placards, as seen adorning the walls of Côté’s setting, evoke the more obtrusive intertitles of late 1960s and early 1970s Godard, but the director’s ensemble of blank-canvas characters here resemble the factory workers of essay films such as Weekend (1967) and Tout va bien (1972).

The extended montage of machines in close-up that follows the opening monologue of Man’s Desiring suggests the entire film might consist of nothing but such images. I would have welcomed it. Trouble is, while experimentation of this sort ought to bring its own discipline, Côté seemingly felt the need to anchor the work once more to a more relatably human (i.e., narrative) arena. It isn’t long before characters begin to talk to one another. The result is uneven, with a cast of interchangeable, dramatically expendable folks exchanging plaints about their daily toil.

Capitalism today? You bet. But the real work surely begins in looking beyond it.