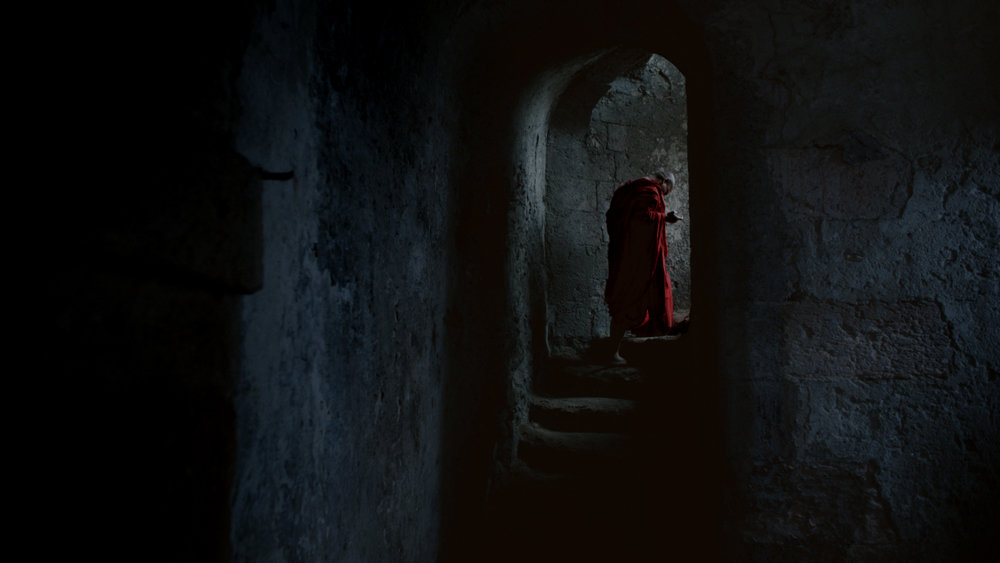 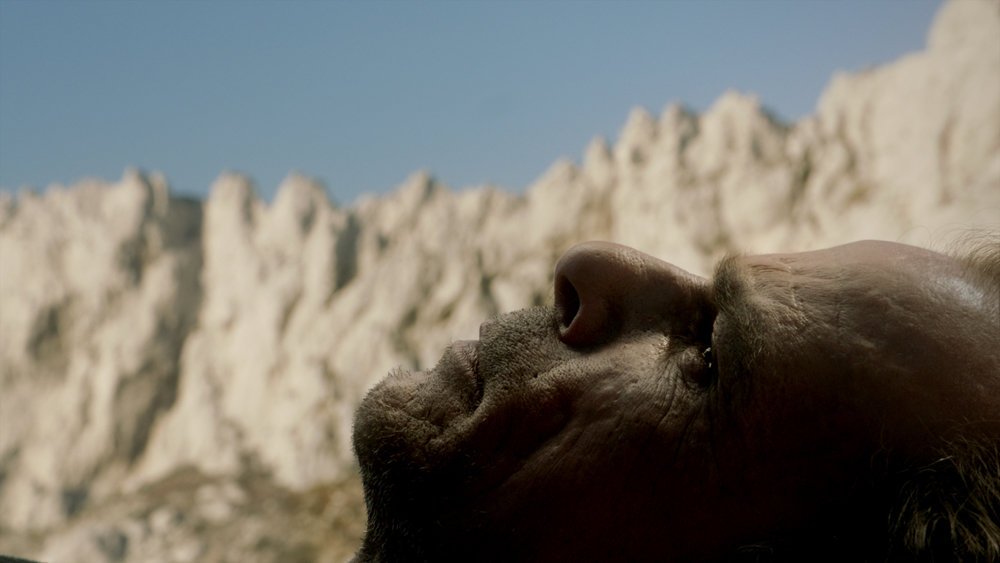 Sometimes a career made up of rich, complex work can arrive at a masterpiece so simple it seems strange to place it on the same pedestal as what came before. After years of amazing works in narrative cinema, Abbas Kiarostami's Five (2003) seems so unambitious—and yet, for me, it is his most pure, moving film. The same can be said of Tsai Ming-liang's Journey to the West, which runs under an hour, the sixth of a (sort-of) series following Lee Kang-sheng's slow-walking monk (that first appeared in Walker, and most recently in Walking in Water)—and now a dormant Denis Lavant that eventually joins in on the slow-mo journey. A remix of sorts of the Chinese myth of the same name transported to nooks and crannies of Marseille, the film's supposed mini-discourse  on East-meets-West, was, admittedly, hardly my entry point into the film. Rather, it was the film's immediate, intuitive beauty, its immaculately designed images, its sense of "sculpting in time," and the remarkable balance between the rigor of its compositions and a regard for the unpredictable activity passing through its frames. It is a film bursting with life.

The opening shot, a close-up of Lavant, in which he (rather intensely) goes without blinking for several minutes, sets the film's contemplative tone, directing the "journey" inward. His watering eyes and the lens mingle in cinematic space. The 13 shots that follow alternate between Lee's monk and Lavant's mysterious denim-clad figure before they finally find themselves occupying the same frame. As with Walker, the film acts in part as a test of what to watch: do you stay fixated on this slow-moving figure, or the action that occurs around him? Do the people who come across the monk laugh, ignore him, film him, or stop and watch? In one impossibly gorgeous shot, a low-angle from the bottom of a metro stairway. Lee descends from the top of the stairs, with a strong beam of sunlight radiating from outside, giving him a golden-hued aura. Passersby react in their own unique ways as they head up or down the stairs. Movingly, one little girl becomes transfixed, and stays for a couple minutes, before being whisked off by her guardian. As the monk makes it halfway down the stairs, my eyes caught a ray of light bouncing off the handrail parallel to him. How had I not noticed this beautiful detail after having intently studied the image for several minutes? Were it not for Lee's delicate descent, would I not have noticed? The journey of the film and the journey of my search through its mise en scène intersecting, meeting. The camera ever so slightly tilts so that one may easily miss it, a move as soft as Lee's steps.

When the two "walkers" finally occupy the same frame, Tsai explores the dimensions of the static image, using these counterpoint figures and their corresponding movement to actually change the composition, its emphasis, depth, and shape. It is difficult to convey the endlessly compelling properties of each shot, the sheer pleasure of the discovery of detail becoming profound in its unfolding﻿. 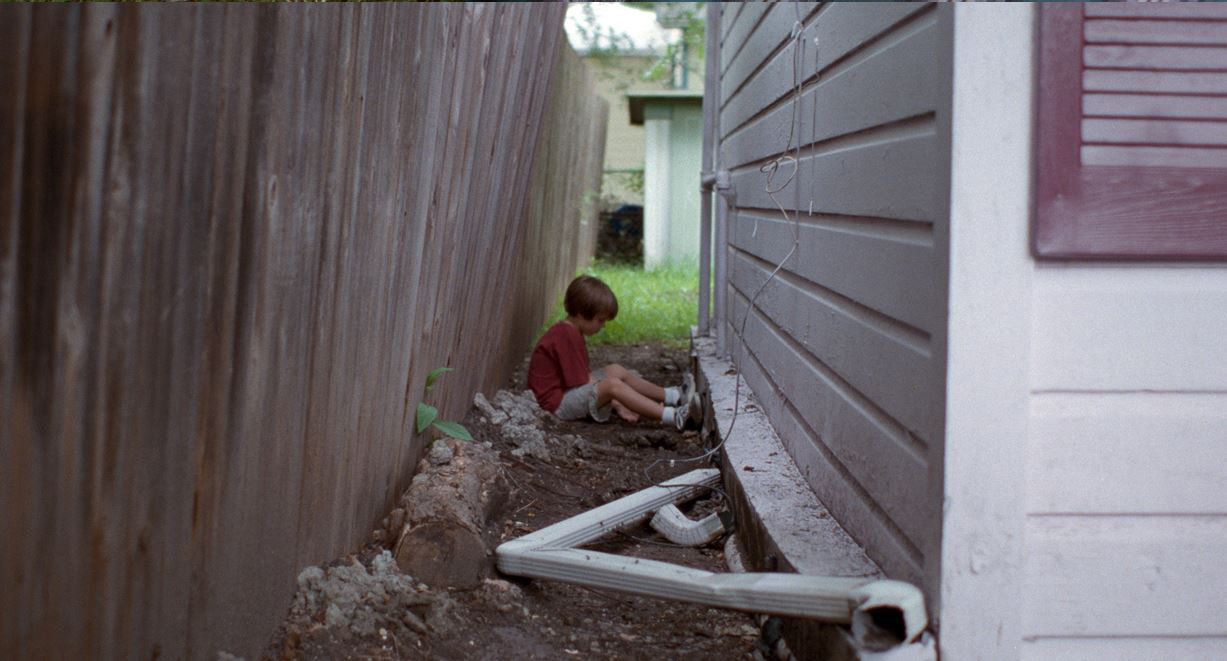 The unprecedented qualities of Richard Linklater's decade-in-the-making Boyhood articulate the most obvious of journeys, that of aging, growing up, and changing. The coming-of-age genre has been done so many times that it is something of revelation to witness an entirely new approach, rendering this "obvious" journey in the least obvious of ways. Shot between 2002 and 2013, the film follows a boy named Mason (Ellar Coltrane) from about age 6-18. The film's title is slightly misleading in that while Mason is the protagonist, the film still fleetingly catalogs his divorced parents' (Patricia Arquette and Ethan Hawke) progression through parent/adulthood, his sister's own adolescence, and, ultimately, is more broadly a study of time and the moments that form it.

Seamlessly held together by the uniform aesthetic of being shot on 35mm film, Boyhood jumps from one year to the next with the subtlest of transitions. Moments from one year bleed into the next, capturing the transience of living. Blink and another year passes. When looking back on a year lived, one does not have 365 days of memories, but rather a brief sort of flash. Linklater brilliantly finds a way of conveying this, as well as the relentless march of moving forward. Humanistic, warmly optimistic, and still somehow unsentimental and melancholic, this is a film of such sincerity and honesty, that its collection of small observations accumulate as real wisdom.

Perpetual, unavoidable change is made palpable by the film's softly pronounced form. Linklater's quiet, unassuming style works perfectly with the film's expansive (yet downplayed) ambitions. The slightest gestures—soft push-ins with the camera, for instance—take on the weight of the world. Watching the actors age creates an incredible effect. Watching the children awkwardly grow through prepubescence and adolescence becomes intensely moving. One can't help but be proud and amazed as the adults they will become start to shine through the cracks. On the other hand, the aging of the adults likewise takes on a power, though a different one. Arquette's character moves from one challenging marriage to another, and the unfairness of life takes its toll. The film dedicates a significant amount of time to charting her own self-actualization, and Linklater privileges her growth as much as that of Mason, suggesting that every stage of life is pivotal. We are always in the process of becoming. It's hard not to want to grasp at life as it passes, to slow it down, but Boyhood so fully acquaints one with the futility of such an instinct.

So: Linklater has made a "life is beautiful" movie, but it's one made of real nuance. It's hard not to be convinced by its conviction in the preciousness of passing moments, the gathering of memories, the opening of possibilities.

Clever signifiers indicate what year we are in: songs on the radio, tech devices (Game Boys, a Wii, iPhones), elections, mentions of Facebook. In fact, it's rather remarkable to consider Linklater & co. were able to organically fit all these things in as temporal markers, but perhaps it came naturally (questions regarding the meticulousness of the film's overall design versus its on-the-go-ness arise). Daft Punk's "Get Lucky" warns us the film is nearing its end. Surely, the most unique and special dynamic from this recording of time is in how the viewer can interact with the film, recognizing shared elements and objects, reflecting on their own past.

Again, the film's title fails to encompass its scope, and while Linklater has specific things he wants to say (or show) about growing up as a boy in Texas, by the end of the film its perimeters almost feel arbitrary. Life is always being lived, equally so in every instant. Appropriately then, the film ends in the middle of a moment (much like it begins). It is not an end, but just a point where the camera must finally stop rolling. The movie stops, but the journey continues.