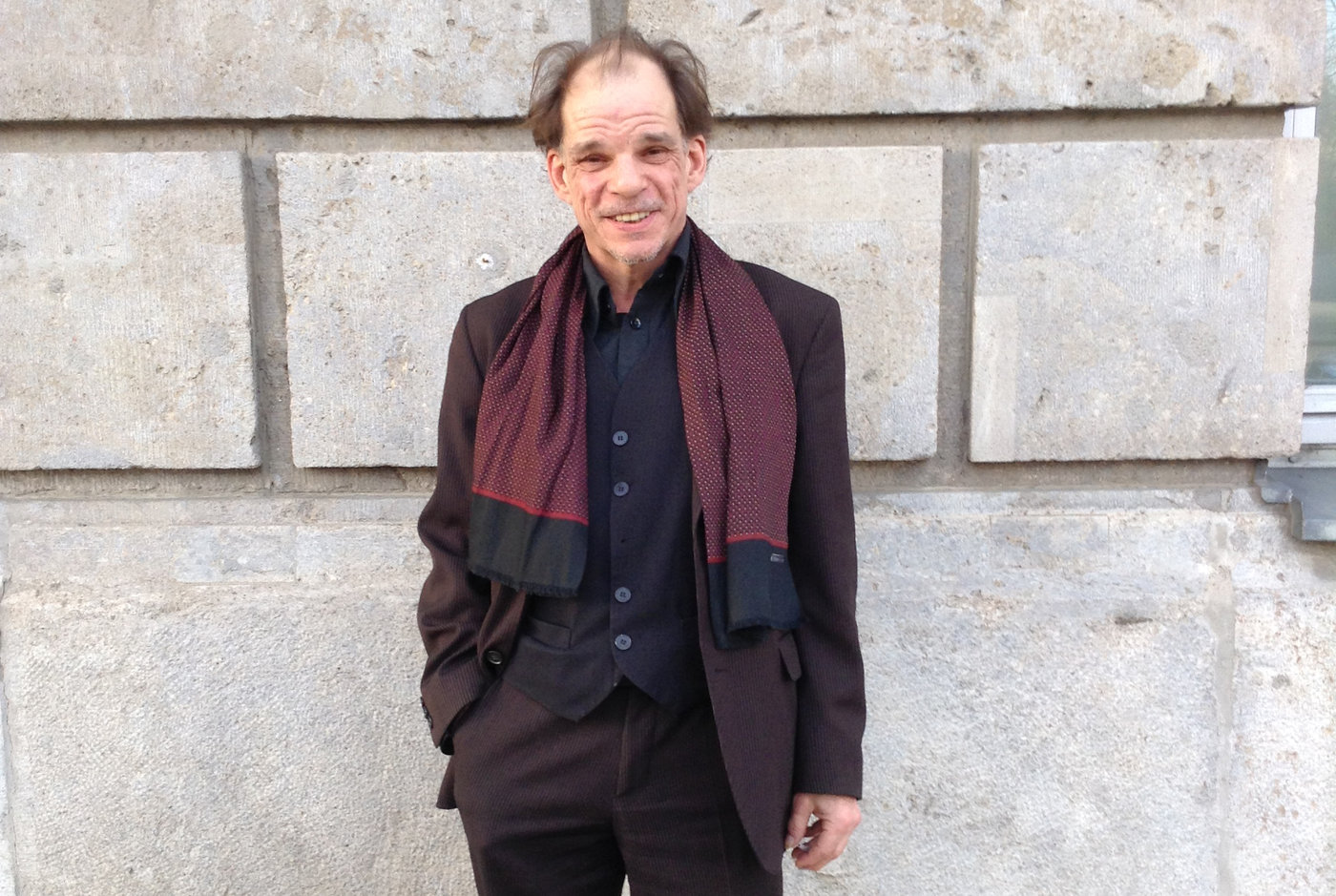 One of the great performers in cinema in the past 30 years, the acrobatic, elastic, kinetic Denis Lavant has defined some of the best films from the world's best filmmakers. Appropriately associated with the films of Leos Carax, in which he has appeared in 4 of 5 features (as well as a short), and one of the greatest endings in movies, the dance sequence of Claire Denis' Beau travail, the stage and film actor is something of an idol of cinephiles, almost exclusively lending his talent to auteurs. Now, Lavant can add another master to his resume: Taiwanese master Tsai Ming-liang, with whom he made Journey to the West—which we've already covered in Notebook here and here—a film that again takes advantage of the actor's physicality, but in a new way.

NOTEBOOK: You're best known for your physical presence in your movies, but there is also a strong sense of emotion behind your performances. How do you get into the head and the body of your characters. To what degree are these things different for you?

DENIS LAVANT: It's complex, haha! I began in pantomime, using only my body, and acrobatics, and working in this way at first. After a while, I tried to really understand the texts I would work with, the words, the meaning, the poetry, and drama. I searched for this other element, to play with it. My first language is the body, but I think it translates.

NOTEBOOK: You've worked with some of the world's greatest directors. What are the different challenges that come with each collaboration?

LAVANT: They are all different but they have in common a poetic point of view of the world, a particular view, but a poetic one. Each time I have to adjust to their different personalities, but they all know what they are doing, and the way they think is different but somehow similar. They each work with the mind and the heart.

NOTEBOOK: In Journey to the West, there are several static long takes that must have really required your concentration. The opening shot, specifically, lasts for a few minutes without you blinking. How did you prepare for such moments? How were you directed by Tsai Ming-liang?

LAVANT: Nothing was prepared! I briefly met Tsai a week before shooting. He told me what he was doing, made me some coffee—he's a great coffee maker!—gave me some Taiwanese music, although I did not listen to it until after the shooting. I asked if I should prepare something and he said "no." The only thing he told me was "to me you are the dragon from the Chinese mythology." My only job was to be ready, and when it began on set, Lee Kang-sheng was doing his slow walk, and Tsai invited me to join him if I wanted, "if you feel it you can do it." And so I joined in just like that!

NOTEBOOK: And was that difficult? Trying to match this walk that Lee has had time, and several films, to perfect?

LAVANT: Physically, no, but it was hard to concentrate. We were on the busy streets of Marseille so I had to ignore all the distractions and stay in my head and keep focused, as in street performance.

NOTEBOOK: Back to the close-up, what were you thinking about when that was filmed?

LAVANT: It's very simple. During the two days of shooting, I felt very in touch with Tsai's spirituality and the contemplative style of the film. In that shot, I was told to look in the camera and to travel inside the lens. He said I could recite poetry if I felt like it, whatever I want. The first take, I said too many things and was thinking of too many things. The second take, I went inside myself, and at a point, I found something, it was meditative. Usually, in front of the camera I am moving, but here I traveled inside. I lost a sense of time, I felt active even while still. To say anything or nothing...I was waiting for the necessity of myself, if that makes sense! The shot went on forever, maybe like 30 minutes, and nobody knew when Tsai would cut. Even the crew members were getting restless!

NOTEBOOK: Did he talk about his beliefs, and that was part of the direction?

LAVANT: No, he just described to me the Chinese legend about the Monkey King, who fights Buddha and is thrown down to Earth, and looks for the Buddhist texts with a monk. Any communication we had was really not by words but with looks, and feelings.

NOTEBOOK: How did you find that experience?

LAVANT: It was incredible, I discovered a new space. 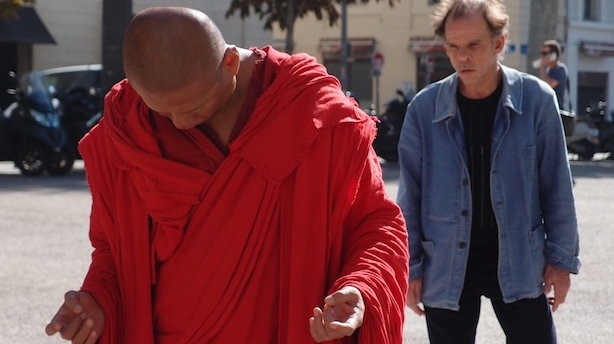 LAVANT: It does not come from cinema. It is Carax, Denis, Korine, Tsai, that see it in me, when it comes to cinema. My love comes from theater, stage, and street performing especially, where your intensity is needed to attract people. And I bring this quality to the screen, I don't think about it, but it is part of me. Everything comes from that instinct. It's more like trance or shamanism than acting. It's like a combustion, it's dangerous, and frightening. ﻿The fear gives you that energy and pressure.

NOTEBOOK: Is cinema harder? When you don't have an audience on set, and you're doing one shot at a time?

LAVANT: There is an audience! The other actors, the boom operator, the cinematographer, I perform for them, the crew is the first audience.

NOTEBOOK: You're in nearly all of Leos Carax' films, and are seen as his sort of alter ego, and Lee Kang-sheng is in all of Tsai Ming-liang's films. What was it like to be the outsider looking in on this artist-muse relationship?

LAVANT: Much more comfortable! [laughs] There was not the same responsibility, I was more free.

NOTEBOOK: So Tsai was more focused on Lee?

LAVANT: No, he was a little bit embarrassed because he was looking at me more!

NOTEBOOK: What was it like to watch them work together?

LAVANT: To be honest, I haven't seen their films, though I knew of them by reputation. But something was obvious on set, a link between them without words. Lee was ready to shoot as if it was absolutely natural.

NOTEBOOK: Is it similar with you and Carax?

LAVANT: With Leos we are very close on set but off set we are very distant. We have a similar connection on set, with very few words. For Holy Motors, it felt like a series of problems to solve together. It used to be difficult, in Lovers on a Bridge, for example, but over the years it has become more and more natural. We've built trust, and we understand each other. He directs me almost like a sculptor, physically. He knows what I bring and I know what he wants.

LAVANT: It was such brief shoot with Tsai, I felt like I was just a visitor somewhere. I entered a game, played it and left. It was very easy. It didn't feel like we were making a film, it felt like it was an intimate exchange that only those present would see somehow. With Holy Motors, everything depended on me, it was on my shoulders. I was frightened leading up to the film, but when we were shooting it was fine.

NOTEBOOK: Perhaps it's unfair to ask you about the ideas of Journey to the West, but what are your thoughts on what Tsai is doing here, by transporting this myth to Marseille, with you, as he said, as the "dragon," and Lee as the monk?

LAVANT: It's like a passage between two worlds and two cultures. There is a shot I remember in particular where I am lying down in the foreground, and way, way far in the background is the monk walking on an island in Marseilles. It is actually known as The Island of Monkeys! In the image, the monk appears to almost be floating above my head, as if it is part of my mind. It's not a dream, but a vision: the East inside the West.