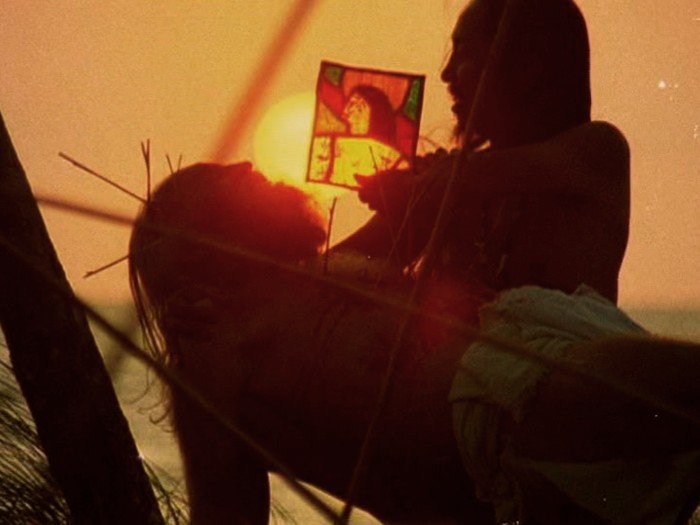 How silly is it that, as cinephiles, our happiness is so bound up with the films we watch? My mood fluctuates at festivals, often based on what film I watched last. One recent morning exemplified this. You and I went to see the press screening of Chilean director Pablo Larraín﻿’s new film, The Club. I was keen on this one as his last film, No (2012), was superb (I recall the mysterious Celluloid Liberation Front wrote on it for us from Cannes). Unfortunately, this film was entirely different, not just in style, but in its relationship to its subject matter, its characters, the world. Where No was invested in people, The Club takes on a very heavy topic with a level of disdain that left me feeling cold. The film is about a group of priests, banished by the church to a sort of holy halfway home. Each of the men have sinful pasts and secrets to hide. We soon discover they’re pedophiles after a drunk man shows up at the home and belligerently berates one of the newest inductees into this “club” of repenting sinners, describing the sexual abuse he faced as a boy in vivid and repulsive detail. The film’s unpleasant content aside, it’s how Larraín﻿ uses his camera and creates a tone that feels so contemptuous of people. Late in the film, a violent moment is filmed in such a way that the action of the cut and in the frame are one, making Larraín﻿ a seemingly eager accomplice to the character’s horrid behaviour. The screening made me feel awful, and I left in a horrible mood—but low and behold I was rescued by a masterpiece.

My mood pivoted from low to high as quickly as the first sequence of Filipino Kidlat Tahimik’s infectious film, Balikbayan #1 Memories of Overdevelopment Redux III, unfolded. The scene, shot on Super 8 (?) follows mysterious costumed figures as they uncover canisters of celluloid buried in the ground. Indeed Tahimik's movie itself is a work that discovers film and appropriates it to new meanings. Over 30 years ago, Tahimik set out to make a film about Ferdinand Magellan's slave, Enrique of Malacca, but was unable to release and/or finish it. Now he has taken some of the scenes, added narration that describes what happens in them, and weaves this into a exhilarating freeform doc-fiction piece, that may be the most exciting opening up of narrative possibilities since Mariano Llinás﻿’ inimitable Extraordinary Stories (2008). The new footage is cheaply shot on digital video (a caption at one point in the film reads: “Desperately Seeking to Correct History (Without a Tripod),” and its rawness may certainly turn people off, but the way Tahimik has assembled everything here is really special, as impressive a formal feat I've seen realized in recent memory.

The film that he shot 35 years ago is completely transformed by the context of this project, yet the images possess a power within their original narrative trajectory as well as a new level, which plunges into colonial history with, at once, a nonchalance, a didacticism, an urgency, and a playfulness. We sat next to each other, Danny, and several times, we looked at each other in utter delight and surprise at what was happening on screen, such inexplicable and whimsical beauty! Karaoke history lessons, digressions on Filipino art, and the overwhelmingly lovely and warm personality of the film’s director, which is present in every line of narration, every edit, every shot choice! And how exciting is it to have a chance to meet this man. We’re both unfamiliar with his work, but after the credits rolled for Memories of Underdevelopment, we were so enchanted that we immediately decided to reach out for an interview. Here’s hoping we’re able to schedule a sit-down in the busy last stretch of the festival.﻿

I’m so glad you liked Queen of Earth, which I greatly admire. I had a brief but insightful talk with Alex Ross Perry that I’ll publish after the Berlinale. I’ll leave my thoughts for that piece, if I may. The overlap in our festival schedule makes for few films that only one of us see, but I have a leg up on you with 45 Years by Andrew Haigh. Viewed early in the fest, this one has resonated with me in the ensuing days, even as I begin to overdose on cinematic consumption. I heard good things about the director’s previous film, Weekend (2011), but this is my first encounter. From the outside it appears a middling British drama. The story of an aging couple and the week leading up to their 45th anniversary, it has all the ingredients for middlebrow fare, and yet Haigh’s direction is subtle, and incisive, bolstered by pitch-perfect performances from its leads Charlotte Rampling and Tom Courtenay. We’re introduced to this couple and quickly are convinced of their marriage’s strength and love. Then the arrival of a letter and the secrets it brings to light from the past disrupt this longstanding union. The film charts the couple’s attempts to cope with the re-evaluation of their love, both separately and together. Not over-serious in tone but quietly dramatic, and beautifully shot, the questions at the film’s core mean business: can even a love so strong and time-tested be undone by the past? What are the consequences of discretion between partners? Is having one’s heart broken the same at 17 and 70? I was moved and even startled by 45 Years, especially when it culminated, as great films sometimes do, in a brilliant last shot that hints at new developments and reframes how we examine what precedes it.

As you know, sleeping plays an interesting role at a film festival. Any critics who say they don’t ever fall asleep at screenings must be lying. Between the lack of rest and the wall-to-wall screening schedule, it’s impossible to go without catching some Zs in the dark of the cinema at some point. The trick is to pick your spots. An ideal moment for me to take a nap was during Wim Wenders’ atrocious Every Thing Will Be Fine, a film not just bad, but also inexplicable. After giving up on the film about thirty minutes in, I attempted to shut my eyes behind my 3D glasses. I was able to get a few winks, but not enough to save me from seeing most of this train-wreck. It's a melodrama about an author (James Franco) who, in a tragic accident, runs over a young boy with his car. The rest of film spans several years and tracks as Franco, his girlfriend at the time of the incident (Rachel McAdams), the mother of the deceased son (Charlotte Gainsbourg), and finally the boy’s brother (Robert Naylor) move on with their lives. Relief from an endless onslaught of stiff dialogue delivered with wooden line readings comes in the form of an overblown musical score that rarely seems to quiet down for any length of time. The actors feel as if they are stranded on screen, not directed, left to aimlessly read from their scripts. This lack of directorial care is contradicted by what seems to be a somewhat careful eye for composition and noticeable efforts to integrate the 3D format in the visual language of the movie.

These efforts, however, are naïve and provide unfortunate results: cheesy images of dust floating in the air, of snow lending a tonally conflicting sense of whimsy, dolly zooms that distort planes of vision for no discernible reason (including an almost sickening shot-reverse-shot that closes the film). Banal and lifeless, the film clearly comes from an awful script, but Wenders' direction isn’t just bad, it’s bizarre. One wonders what could have possibly lead him to this project, and even more, to making the choices he did. Why is it even set in Quebec? Why is there no hint of French-Canadians other than McAdam’s terribly distracting fake accent (Franco reads as Franco, Gainsbourg as Gainsbourg)? I hated this movie but it perplexed me in a way that few films do. I suppose that’s something.

Speaking of being caught off guard by a director’s choices, the same could be said of Terrence Malick’s Knight of Cups, which finds the ambitious filmmaker doing and trying exciting, and yes perplexing, new things. So taken by the makeup of this extraordinary (whether bad, good, or great) film, we set it aside for a specific dialogue exchange outside of these correspondences, which can be read here. Lastly, it seems you really wish for me to write on the Herzog... Are you, as my editor, challenging me to confront this failure by a beloved filmmaker? Or are you avoiding it yourself? Well, I seem to have run out of room in this entry so I’ll pass the buck to you one last time.﻿