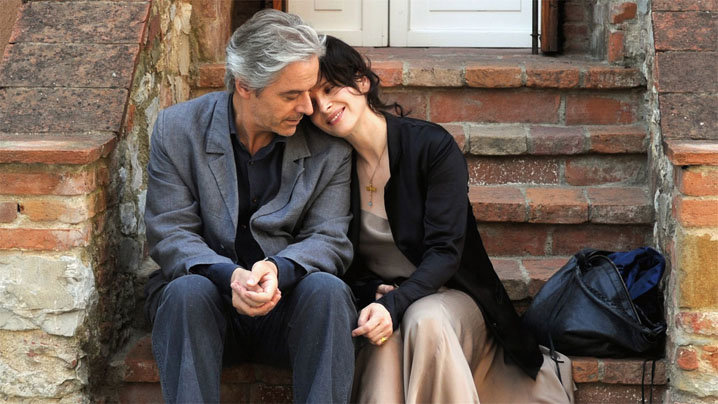 "The best film so far in this year's Cannes competition, Abbas Kiarostami's first feature made outside Iran is in many ways a departure in terms of style and content, yet at the same time it is utterly Kiarostami and one couldn't really imagine it having been made by anyone else," writes Geoff Andrew in Time Out London. "It's an extraordinary film, steadily building to a very moving final scene by way of a seemingly meandering but in fact very focused narrative held together by meticulous and subtle mise-en-scène."

"Operating on some levels like a Tuscan Before Sunset," writes Matt Noller at the House Next Door, Certified Copy "follows an art gallery owner (Juliette Binoche, who richly deserves the Best Actress prize Lesley Manville will probably win) and an English writer (opera singer William Shimell, superb in his first film role) who go on a tour of southern Tuscany after the they meet at a local conference. He is speaking on his recent book, Certified Copy, about the relationship between original works of art and their copies. The book's argument is that an imitation is just as good as the original, so long as it has the same effect on the viewer; the history of work doesn't matter — it's all in how you look at it. Certified Copy internalizes these notions, acting as a self-aware commentary on art, as well as an examination of reflection, imitation, and performance in love and life."

"After a string of terrific, visually stunning films in the 80s and 90s, Iran's Abbas Kiarostami gave up celluloid and spent a decade making cruddy-looking video experiments like 10 and Five; I'd completely given up on him by the time his latest, Certified Copy, was announced for this year's Competition, and my step into the Debussy theater for its evening press screening was fairly doom-laden." Mike D'Angelo at the AV Club: "Cut to your jaded correspondent two hours later, choking back tears in his seat.... Best of all, Kiarostami the magnificent imagemaker is back with a vengeance — there are sequences here as stunning in their use of offscreen space as anything he's done before, coupled with a massive leap forward in his recent fascination with the close-up."

"Shimell and Binoche, the latter continuing her glorious recent career transition into looser, earthier middle age, have a tentative but knowing chemistry together, like two people not sure if they share the same secret," writes Guy Lodge at In Contention. "Are they strangers or lovers, and either way, who is making up the rules in this role-playing charade? It would be a thoughtless critic who spoiled Kiarostami's delicately balanced game in his review, but this gorgeous, funny, subtly probing film promises further revelations and interpretations on a repeat viewing."

In the Hollywood Reporter, Deborah Young finds "echoes Roberto Rossellini's critically revered Voyage to Italy (1954), in which a British couple played by George Sanders and Ingrid Bergman come to Naples on the verge of divorce and find reconciliation amid the mysteries of nature, art and religious belief. Kiarostami is not so optimistic.... Binoche has a chance to display her noteworthy gifts as a comedienne, switching effortlessly from English to French and Italian to build a character that is resentful, manipulative and seductive all at once.... In his first time on screen, Shimell brings his skill at interpreting complex operatic characters to bear in a film sans music. His elegant cool is very close to George Sanders's, making him a perfect Kiarostami stand-in."

Lee Marshall in Screen: "Mirrors are constantly framing side views or details; the Binoche character's crucifix necklace turns out to be a dragonfly; a man (a cameo by veteran screenwriter Jean-Claude Carriere) apparently having an argument with his wife in a pretty piazza turns out, once the perspective shifts, to be shouting at someone on his mobile phone. And in a masterful touch, the eyelines of the couple in their reaction shots come closer and closer to the centre of the lens until they seem almost to be staring straight at us; but not quite.... Once we begin to reflect properly on what we've just seen, rerunning certain key scenes in our head for clues, the director's choice of an actor and a non-actor for the main roles is just one more layer of the film's discourse about the difference between copy and original, play-acting and being for real." 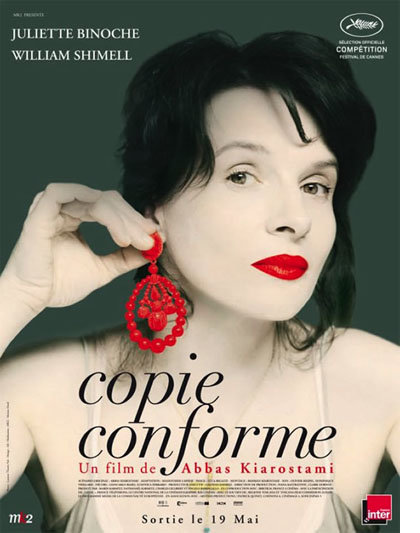 Updates: "Abbas Kiarostami today launched an appeal for the release of a fellow Iranian who should be judging this year's Cannes film festival," reports Mark Brown in the Guardian. "Kiarostami called the detention of Jafar Panahi an 'attack on art,' following unconfirmed reports that Panahi was on hunger strike."

"Panahi was due to take his place on the Cannes jury this year," reports Anita Singh in the Telegraph. "Instead, he is incarcerated in Tehran's notorious Evin prison, after he was arrested for unspecified crimes. The festival has left an empty chair on the jury panel." Juliette Binoche "sobbed as reports filtered through that Panahi had begun a hunger strike." Cannes has video of the press conference.

"[T]he cleverest thing about Kiarostami's first fiction feature made outside of Iran is that it's a 'certified copy' of a European art film," blogs the Voice's J Hoberman.

"A comedy of remarriage buried in intellectual abstraction and cinephilic obsessions, Certified Copy wanders a bit but never loses focus, with the only certainty being that its gimmick is genuine," writes Eric Kohn at indieWIRE.

Updates, 5/19: "Certified Copy is the best film yet to compete for this year's Palme d'Or," declares Time Out Chicago's Ben Kenigsberg, "a movie completely unexpected and utterly without analogue in his body of work (although it shares certain thematic similarities with 1990's Close-Up)."

From the Playlist: "According to Variety, the director will return to his home country for his next film, tentatively titled Father and Son, which was initially set to go before Certified Copy, although it's now set to roll in September. The film will star Hamed Behdad, who starred in last year's winner of the Un Certain Regard Special Jury Prize, No One Knows About Persian Cats. At a Cannes press conference, Kiarostami didn't let many details slip about the film, saying, 'It's quite hard to say what it's about because it does not have a narrative structure, but it's from an idea that I've had for several years.'"

Update, 5/20: IFC Films has picked up rights for the US; indieWIRE's Eugene Hernandez reports on deals for other territories as well.

Update, 5/21: "The most appealing part of Certified Copy is Ms Binoche's generous, alternately uptight and loose performance, which pulls you close when her character's unpersuasive actions turn you off," writes Manohla Dargis in the New York Times. "The cinematography by Luca Bigazzi is another draw, capturing the beauty of Tuscany without drowning it in the honeyed tones that often goo up the screen whenever anyone shoots in that part of the world.... I wish I believed that this woman would have tolerated this insufferable man for a single second; it might have helped if Mr Shimell, who has an interesting, grave face, were a plausible screen performer."

Updates, 5/22: "On one level, Certified Copy is exactly the kind of film it looks like — an elegant, wistful and picturesque tale of two ships passing in the Tuscan sunlight, in which not much really happens." Andrew O'Hehir in Salon: "But in fact it's, well, a clever copy of that kind of film, with lots of other things under the surface. This story bristles with ideas and intelligence, and the more you stick with it, the more complicated it gets. Ultimately, Kiarostami isn't just inquiring into the nature of love, marriage and relationships, he's probing the porous boundary between stories and reality."

For the New York Times, Dennis Lim talks with Binoche (audio) and with Kiarostami.

Updates, 5/28: A report from the Tehran Times: "An official of the Iranian Ministry of Culture and Islamic Guidance has said that Iranian auteur Abbas Kiarostami's Certified Copy would not premiere in Iran due to the skimpy dress of the film's French star Juliette Binoche."