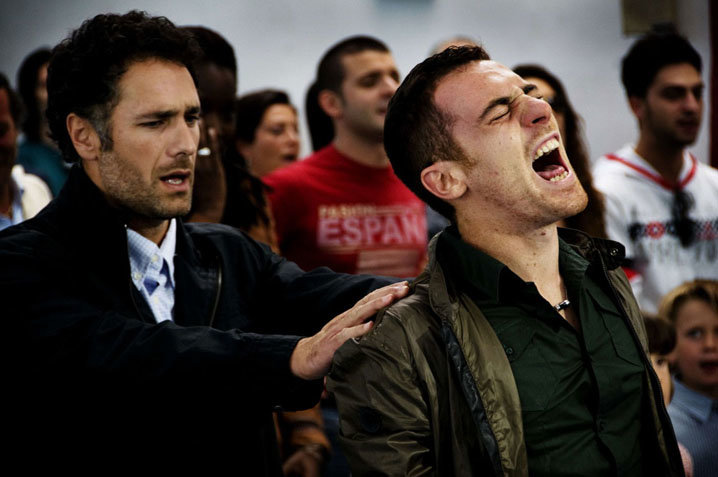 "One of the most purely baffling entries in this year's Competition, Daniele Luchetti's would-be melodrama sets up all the ingredients for a rewarding highbrow soap along the lines of his excellent last feature My Brother Is an Only Child — only then to take a perverse course of conflict-avoidance." Guy Lodge at In Contention.

Our Life is "a gritty, closely observed slice of Roman proletarian life," writes Lee Marshall in Screen. "And it's marked by a raw (though at times rather too full-on) performance by Elio Germano in the lead role as a construction worker with two kids, who after the sudden death of his wife tries to provide for his family by setting himself up as a shady building contractor." But "Luchetti and his co-scriptwriters are so enamoured of their characters that they forget to build a satisfying dramatic home for them."

"It's like a Dardenne brothers movie with the moral and emotional stakes — stakes of any kind, really — completely removed," writes Matt Noller at the House Next Door. "It's incredibly bizarre, and from a dramatic standpoint makes absolutely no sense. Our Life is never boring, but that's because it's never anything; it just runs on, pointlessly, until it stops."

Mike D'Angelo at the AV Club: "As the movie ended, at an arbitrary moment, I found that I couldn't think of any reason why it exists, unless it's some sort of avant-garde experiment meant to demonstrate how narrative cinema plays when divorced from drama, tension, plausible psychology, visual brio, and thematic interest."

"Luchetti shoots in a documentary-like style, using a hand-held camera and many close-ups, natural light (caught by DoP Claudio Collepiccolo) and a number of real construction workers," notes Camillo de Marco at Cineuropa. "In doing so, he wants to present a portrait other than the classic one we have of the working class, and above tell a small family drama."

The film's not faring well at all at Letras de Cine.

Update, 5/23: Best Actor for Germano (shared with Javier Bardem for Biutiful). Here's the full list of the Cannes 2010 awards.