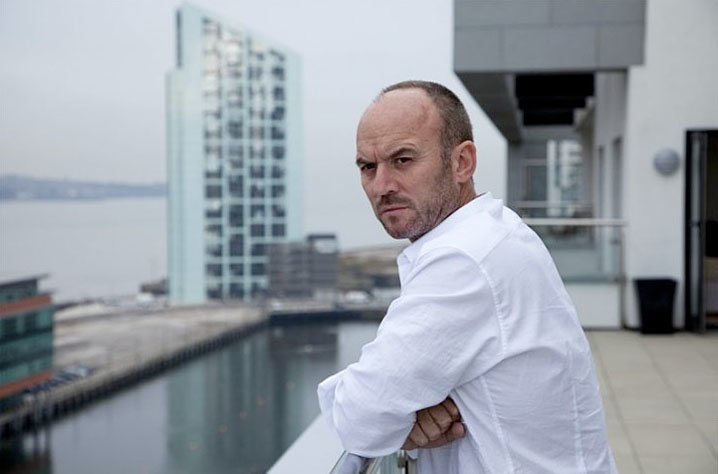 "Ken Loach's last minute addition to Cannes competition is a hard-edged thriller — his first, in fact, since Hidden Agenda played competition here in 1990 — covering dirty deeds by contractors in Iraq." Screen's Mike Goodridge: "Surprisingly conventional in its plotting but distinguished by an intriguing moral complexity, Route Irish could be Loach's most commercially accessible film to date and is no less gripping or damning of the conflict than Paul Greengrass's Green Zone — although made at a fraction of the budget and mostly set in Liverpool."

The film "takes as its central character Fergus (Mark Womack, in his feature film debut) a former SAS man and latterly a private contractor paid big bucks to enforce security on the mean streets of Iraq," explains Wendy Ide in the London Times. "Fergus is like a permanently clenched fist. The opening shot of the film plays out to voicemail messages he failed to return because he was locked up for brawling. Within the first ten minutes of the film, he has launched himself like a torpedo through the throngs of respectful drinkers at the wake of his best friend [Frankie] to assault a shady contractor who tries to recruit the mourners."

"You've already read about the many problems and moral challenges that arose when the Coalition Provisional Authority gave immunity from Iraqi law to such contractors in that country," writes Kirk Honeycutt in the Hollywood Reporter. "So what Loach and his longtime collaborator, writer Paul Laverty, zero in on is the grief and explosive, potentially lethal anger in one such hired gun when a buddy comes back in a body bag.... Fergus unravels what he believes was a conspiracy to hush up the fatal mistake and silence Frankie. But this would pretty much turn the movie into a murder mystery where a good guy tracks down bad guys. Loach won't tolerate such a simplistic drama."

"Loach rejects the sexed-up, supercharged style of filmmaking that another kind of director might have employed," writes the Guardian's Peter Bradshaw. "The keynotes are clarity and simplicity, steering well clear of whooshing hand-held camerawork and sweaty closeups. Even shouting confrontations and violence are shot in a calm and even detached way.... Considered as a straight thriller, Route Irish does not in fact deliver much, and this isn't a major Loach film. But its value lies in the director's alternative emphasis on the spiritual desolation in the long, shabby aftermath to Iraq."

Dave Calhoun in Time Out London: "The mood is bleak and angry, a tone compounded by cold, direct photography from Chris Menges (Kes, The Killing Fields) and a script by Loach's collaborator Paul Laverty that refuses to be distracted from the personal horror of war, both here and in Iraq, where we witness bombings, shootings and beatings, mostly via archive footage, although Loach did travel to Jordan to shoot some scenes. It's an uneven film, offering a gut punch in parts but failing to keep a strong and clear focus in others — but it's a necessary and energetic work, and one that brings a foreign war right back home and refuses to treat it as a distant or academic problem."

In the Observer, Loach briefly discusses the films "that changed my life," Vittorio de Sica's The Bicycle Thieves, Milos Forman's A Blonde in Love and Gillo Pontecorvo's The Battle of Algiers.

Mark Brown talks with Loach for the Guardian.

Updates, 5/20: "The bigger picture risks becoming blurred as the film-makers concentrate on Fergus's vendetta against the men who killed Frankie," finds Geoffrey MacNab in the Independent. "Loach is too impassioned and well-informed a filmmaker to lose sight altogether of the political backcloth against which the story is being told. However, when Fergus gives a thug a taste of waterboarding or brings some Baghdad-style carnage to the leafy car park of an English countryside hotel, he is behaving not so differently from the craggy, emotionally repressed action heroes in countless other movies by far lesser directors."

The Telegraph's Sukhdev Sandhu finds it to be "an indifferently-acted thriller too many of whose scenes involve characters on Skype to truly thrill."

Updates, 5/21: "Route Irish is a thriller, but there aren't many surprises to be had," writes Matt Noller at the House Next Door. "Anyone with any experience with political conspiracy movies will know almost immediately who will turn out to be the bad guy, so all the scenes of investigation and clumsy exposition — and there are a bunch — are just marking time until Fergus starts to get his revenge. At that point, Route Irish actually gets a lot more interesting, because it becomes clear that Fergus is not meant to be a sympathetic character, but a dangerous, increasingly deranged one. This is powerful in theory, if not always in execution."

It "may suffer from flat performances and an overwrought, polemically-motivated plot, but there's no denying its basic power as targeted polemic," argues Eric Kohn at indieWIRE.

Update, 5/24: "This year's competition slate has been fairly weak, and Route Irish was certainly among the weakest selections," blogs Manohla Dargis for the New York Times. "A left-wing ideologue who gives leftists a bad name, [screenwriter Paul] Laverty wields his politics like a truncheon, beating you about the head with his blunt ideas." What's more, "The use of images of real dead and wounded Iraqis is not just exploitative – it's shameful."

Cannes has a clip. Cannes 2010: Coverage of the coverage index.