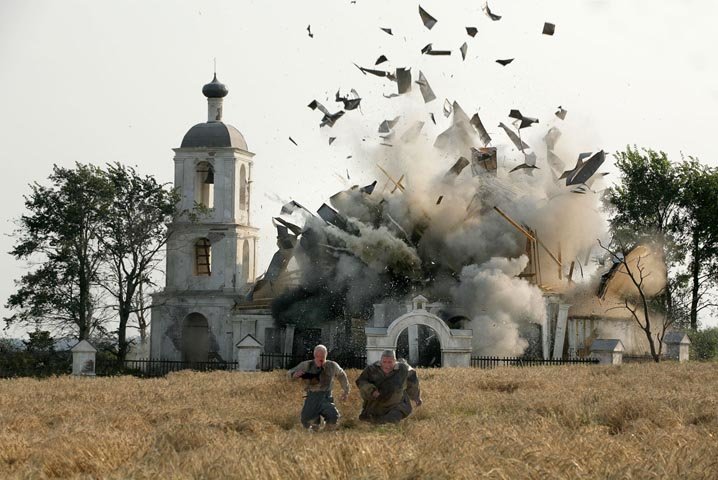 "Sprinting with two left feet in a last-minute, neck-and-neck race against Tender Son: The Frankenstein Project for the title of Most Embarrassing Competition Entry is Nikita Mikhalkov's lumbering, cacophonous and frequently hilarious 'five years later' follow-up to his 1994 Grand Prix (and Oscar) winner." For Guy Lodge, writing at In Contention, the original's "literate tone and intimate narrative focus fall by the wayside while the director pitches his tent somewhere between David Lean and high-minded Michael Bay."

"Exodus is essentially two and a half hours of Colonel Kotov (Mikhalkov) trudging through WWII battle zones to reunite with his daughter Nadya (Nadezhda Mikhalkova, the director's real-life offspring) without making very much progress at all," writes Matt Noller at the House Next Door. And this is just Part 1 of the sequel, mind you. "The entire movie is nonstop bombast, with huge battles, epic widescreen vistas, silent-film performances, and one of the most absolutely ridiculous scores I've ever heard in a movie. It can be very funny (largely because Mikhalkov clearly doesn't mean any of it as comedy), but it's mostly just exhausting, especially once the movie ends with Kotov and his daughter just as far apart as they were to begin with, and you realize that nothing you just watched mattered at all. I'm sure it will all be resolved in Exodus: Burnt by the Sun 2: Part 2, but I can't exactly say I'm counting down the days to find out."

"Is it really possible to make a true sequel to Burnt by the Sun?" asks Ben Kenigsberg at Time Out Chicago. "Of the four principal characters, one was executed, one died in a labor camp and a third committed suicide. (In a move worthy of the lost season of Dallas, we're given to understand that General Kotov's execution was averted because the charges against him were changed. The suicide, we must take it on faith, was a botch.)... The new movie more or less gives up on telling a story (perhaps the interludes in which we veer off to follow German soldiers made more sense in the earlier cut) and devotes its primary attention to air raids, explosions and wound-dressing."

"The film seems laden with influences from other films/TV series," notes Screen's Mark Adams. "Mikhalkov has already stated his original idea came from watching Saving Private Ryan, though it also feels familiar to Dr Zhivago and Band of Brothers, while a little Inglourious Basterds also creeps in towards the end."

Burnt 2 "was something of a guilty pleasure for me, simply because it’s an old-fashioned, large-scaled World War II epic the likes of which one seldom sees anymore," blogs Todd McCarthy. "But don’t look for it on the art film circuit."