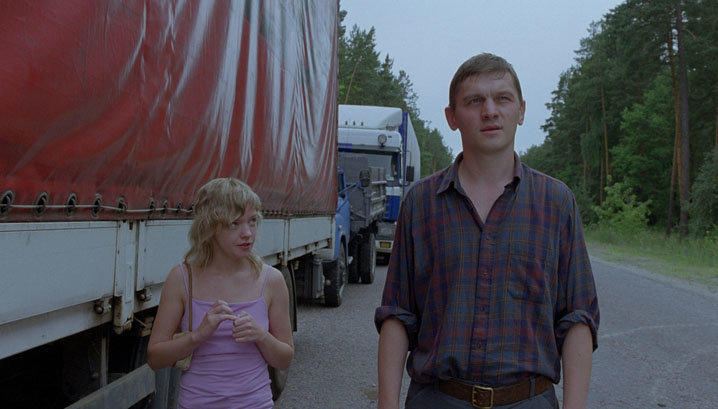 "The only debut feature presented in competition this year at the 63rd Cannes Film Festival, Ukrainian director Sergei Loznitsa's My Joy yesterday plunged the press into a totally black world where thieves abound, impunity reigns, the roads lead nowhere and the mark of war sows chaos contaminating minds from generation to generation." Fabien Lemercier for Cineuropa: "Ultra-nihilistic and offering a terrifying image of small-town Russia, the film reveals an original director with strong potential, who is particularly bold (far too bold, some will say) in his screenwriting approach and has outstanding visual talent that draws on the best of his experience as a documentary filmmaker."

"[F]or about an hour I was sure I was witnessing an exciting new talent, even though I wasn't entirely sure what the hell was going on," writes Mike D'Angelo at the AV Club. "Following a nondescript truck driver en route to deliver a load of flour, My Joy (WARNING: titular irony) initially has an engaging shaggy-dog quality, as the trucker's encounters with folks along the road — an elderly hitchhiker, a scarily young hooker — spin off into unrelated mini-narratives of their own... About an hour in, however, the film goes well beyond discursive and becomes almost completely random, abandoning the trucker entirely (in a startling way) and flitting around without even that vague semblance of a narrative skeleton."

The Guardian's Xan Brooks was "riveted. It's a harsh tale of contemporary Russia, as beautiful as a bruise. Viktor Nemets plays the decent, dogged driver who trundles through lawless rural badlands before grinding his gears in a gutted community where the menfolk have gone to the bad and the police are too busy tracing nude pictures out of girlie magazines to do anything about it. At its best, this plays like a hellish, social-realist reinvention of some fantasy quest. The hero travels through Middle Earth and meets wizards, sirens and trolls. Except that, in Loznitsa's version, the wizard is a disgraced former soldier, the siren a child prostitute and the trolls a trio of gnarled brigands who cook potatoes at a forest campfire and cudgel anyone who draws too close. It's like nothing I've seen at this year's festival: an outside bet for the Palme d'Or."

"I respect the project intellectually even as I can't quite forget how off-putting the actual viewing experience was," writes Matt Noller at the House Next Door. "But I'm sure that's by design, and there's no question that it has stuck with me in a way few of the festival's other titles have."

"Loznitsa travelled extensively throughout the Russian provinces when he was making his documentaries," notes Allan Hunter in Screen. "The accumulated anecdotes and life histories he gathered along the way have provided the inspiration for My Joy that was filmed in the Ukraine. Cinematographer Oleg Mutu (The Death of Mr Lazarescu, 4 Months 3 Weeks And Two Days etc) expertly captures the natural beauty of lush countryside, snow-dusted wintry landscapes and the shadowy, noirish tone of the film's darker moments."

Updates, 5/22: "Its wavelength is less structural than physical, weighted, anecdote based," writes Daniel Kasman here in The Daily Notebook. "Perhaps it has something to do with Loznitsa's documentary roots and seeing a myriad of stories stuck in the mud all around a real road."

For Salon's Andrew O'Hehir, My Joy "was the most unexpected and arresting picture in the main Cannes competition.... Like all horror movies, this is a grossly exaggerated fable, one that arrives by way of its impressive cinematography and interpolated tales at a startling but inevitable conclusion."

Cannes has audio from the press conference. Cannes 2010: Coverage of the coverage index.